Bringing Back the Fanny Pack

Around 3 weeks ago, Kelly and I were at lunch.
Kelly: I think I might want to go to LA at some point.
Me: Let’s go to Disneyland!

I’m still not sure if she meant that she wanted to go with ME, but we’re going to Disney this weekend with Rach. 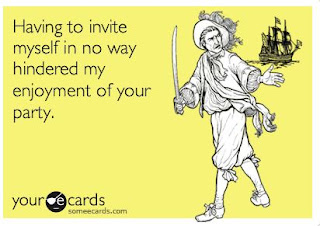 Thursday night we met Rach out for Husband Hunt night and Kelly brought up the fanny packs and before long we had planned a lingerie and fanny pack shopping day.  When I came home I saw Zach.

When I told Rach, she said, “So he basically did the exact same thing that you did to Kelly.” Ugh! No! It’s COMPLETELY different Rach! 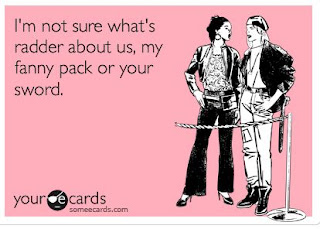 Rick pointed us to a new bar for HHN – We ordered 12 ounce beers instead of 20 ounces (so we could choose another kind if we wanted.)  When the 12 ounce beer arrived however, Rach looked at its miniscule size and said, “I feel like I'm being punished.”

Thursday night, Nate surprised Dawne by coming home for her birthday party.  Friday was a really productive work day (not that you care about that.)  Dawne was getting ready for her party all week so all of the furniture in the house was moved out, and replaced by tables and chairs and super fun decorations.  It was so nice out that we all went on the boat and it was just a lovely evening.  Saturday morning, it was another gorgeous day, so I went out to the car to get it ready for the first convertible day of the season only to find a foot long slash in the roof top.  (This is my third convertible and previously, I never locked my car with the reasoning that I would rather them just open the door than slash my roof.  But then, after the Halloween party robbery, I just started locking it -- not that there was anything left in my car to take.  Naturally, someone wanted to make me feel good in my decision to leave the car unlocked for the last 10 years.  Thanks!)  I needed to whine, and given that the fam was already out for the day, I called Briana.  I think her exact words were, “That’s what you wanted to complain about?  If I had known that I would have told you that I needed to call you back later.” 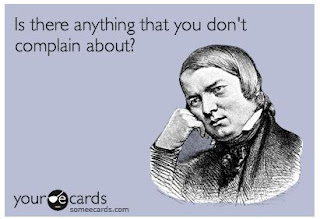 I didn’t want the car to ruin my plans for the day, so I left to pick up Kelly for the Bunny Bar Hop.  I think over 1000 people RSVP’d – I’m not good at numbers, but the two bars we did go to, were pretty packed with people.  There were so many people and costumes to look at, I couldn’t concentrate on a single conversation.  If I was looking for a definition of “Visual Overload” this event was it.  I even saw one dominatrix bunny duo where the chick was a leash – and when she went to talk to someone, he dragged her back by the leash. There was a male spandex zebra bunny (his shoes were a little big, but they were also zebra print.)  I should have taken more pictures for you – I apologize. Either way – it was an experience. 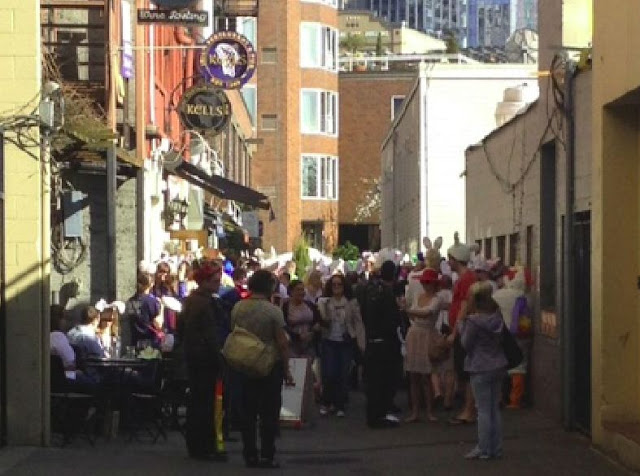 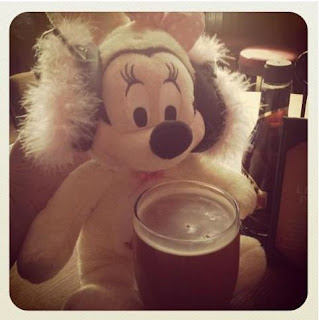 Then I came home to get ready for Dawne’s birthday.  Super fun.  We all played Calliope Games (you should check out their awesomeness here:  http://www.calliopegames.com/ ) We tried to keep track of our scores on a big board although Lucas told me that he wouldn’t be eligible to win because “I didn’t use my legal name.  L-Dawg!” I’m sure that’s why he didn’t win.    We aren’t sure who paid the 10 grand (http://www.kickstarter.com/projects/1613260297/shadowrun-returns) to get Mike to play games with us but we were all pleased to have him around to entertain us.  Here are some snippets of our conversations.

Mike: I was up early for softball.
Sharon (Mike’s wife): I hear the pitcher was terrible.
Zach: The what?
Sharon: In Vivian’s age group, parents pitch and Mike was pitching this morning.
Zach: He was what?
This is when Sharon realized how silly it was to try to talk to someone in my family about sports. 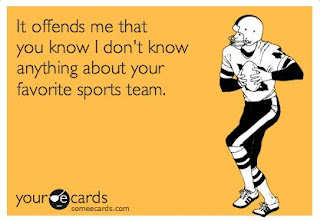 We were playing a prototype game with Raymond where you try to guess which thing will completely creep out a person the most.  As Sharon was reading on card in particular – she finished the sentence and then said, “How about [adding a card with] ending a sentence with a preposition.”  Editors are funny.  Becky was reading off some situations and one was having a stroke.  Me: Does that include losing speech?  No brainer, Becky. 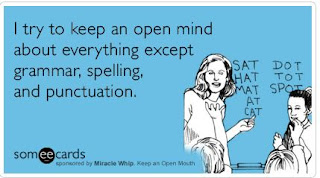 Mike: Clementine (his 13 year old daughter) designed an Easter Egg hunt for the school in which people got specific colored eggs that they needed to search for and she had all plans drawn up etc. and when I asked what she was doing I started to freak out that she was starting to think like a game designer.  Anything but a game designer.
Lucas: This isn’t a life I recommend.  J 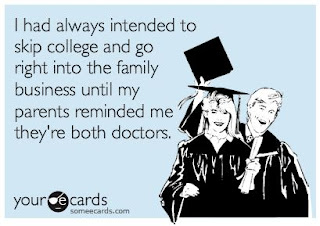 Before the party, we were trying to clean up so I was finding places for all the game lying around in the cabinets.  When I looked up during the party, Raymond was handing Mike “Plunder.”
Me (from across the room): Raymond? Did you take that from the cabinet?
Raymond: Yes.
Me: Yeah.  That game isn’t complete.
Raymond: Are you sure?
Me (again yelling across the room) Yeah.  I just put that away and I was too lazy to open it up to put the extra bits in.  Let me go get that for you.

What are the chances of someone taking the ONE game I took a short cut on? 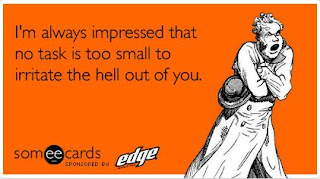 As Becky and Jared were leaving the party, Jordan came over, shook Jared’s hand and said, “It was a pleasure not speaking to you tonight!” 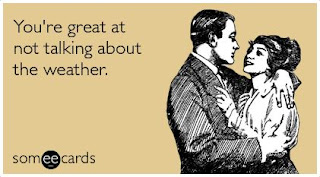 I apologize, because I definitely know that I laughed an awful lot on Saturday night, but I don’t remember at what.  We did wrap up the night watching some Flula – so I’ll just throw some of those in to make up for my lack of memory. J

On Sunday, I met Rach and Kelly for brunch before shopping.  I randomly chose a place called the Sugar Shack that only took cash or check – and if you were wondering who in 2012 writes checks – Kelly did for 12 dollars.   I also decided last week, after taking that “How many countries have you been to” facebook quiz, that I want to go to South America.  Bonus, now that we have fanny packs, we’re totes ready for our 2013 Samerica trip.

Rach: Where is the one place you want to go in South America?
Me: Jungle.
Rach: Like the Amazon?
Me: Sure.
Kelly: No.  I don’t want to go to a Jungle.  Have you seen the movie Anaconda?
Rach: Kelly.  No.
Kelly: What?
Rach: If you had said anything but Anaconda, maybe a documentary, or something you read in National Geographic, I might have been supportive.  But no.
Kelly: It has J Lo in it!

Replace “today’s date” with “Jungle” and this card totally works. 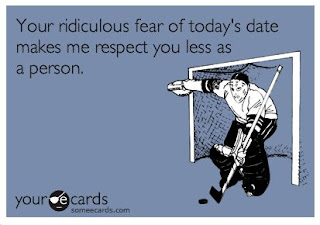 We went to the Alderwood Mall.  As we were walking across the parking lot…
Rach: Is this JCPenny’s?  It’s different than I remember it. 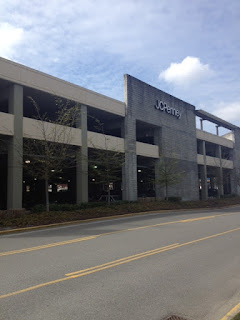 We were looking at all the amazing fanny packs, and one description said that the fanny pack at the power of a thousand solar panels.  Later, we stopped at the Apple store for an extra iPhone battery pack, but it was expensive and it didn’t look awesome.

Me: You should just get one of those solar battery chargers.
Rach: Or that fanny pack that has the power of a thousand solar panels.
Me: Oh yeah!  You better ask about what type of adapters that thing has.

Who needs Apple when you have a fanny pack?

My nephew got in trouble last week for making a kid on his team cry.  Maureen asked him what he said and after a little bit he looked down and finally told me "he kept checking me for no reason, so I told him he had anger issues". 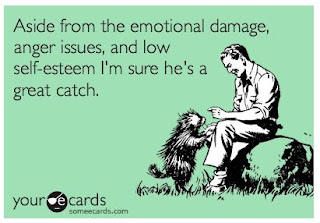 I woke up at 6 am this morning so I could make Mac and Cheese for a co-worker who is recovering from surgery.
Zach: You must really like this co-worker.
Me: Why do you say that?
Zach: I would have just handed them a box of Kraft macaroni and cheese. 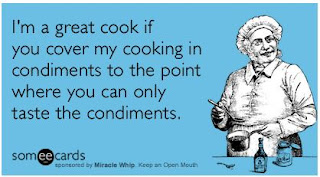 Posted by skcorynaffit at 12:09 PM