The problem with writing updates a month late is you have no idea what you were referring to when I wrote, "I love ruining people's stay" and "Remember when you wore that to one of the weddings?" Never the less, I'll try to fill you in on my trip home to New York.  If I do forget anything just know that I had a lovely week, surrounded by family and love, and just a perfect Christmas at home. 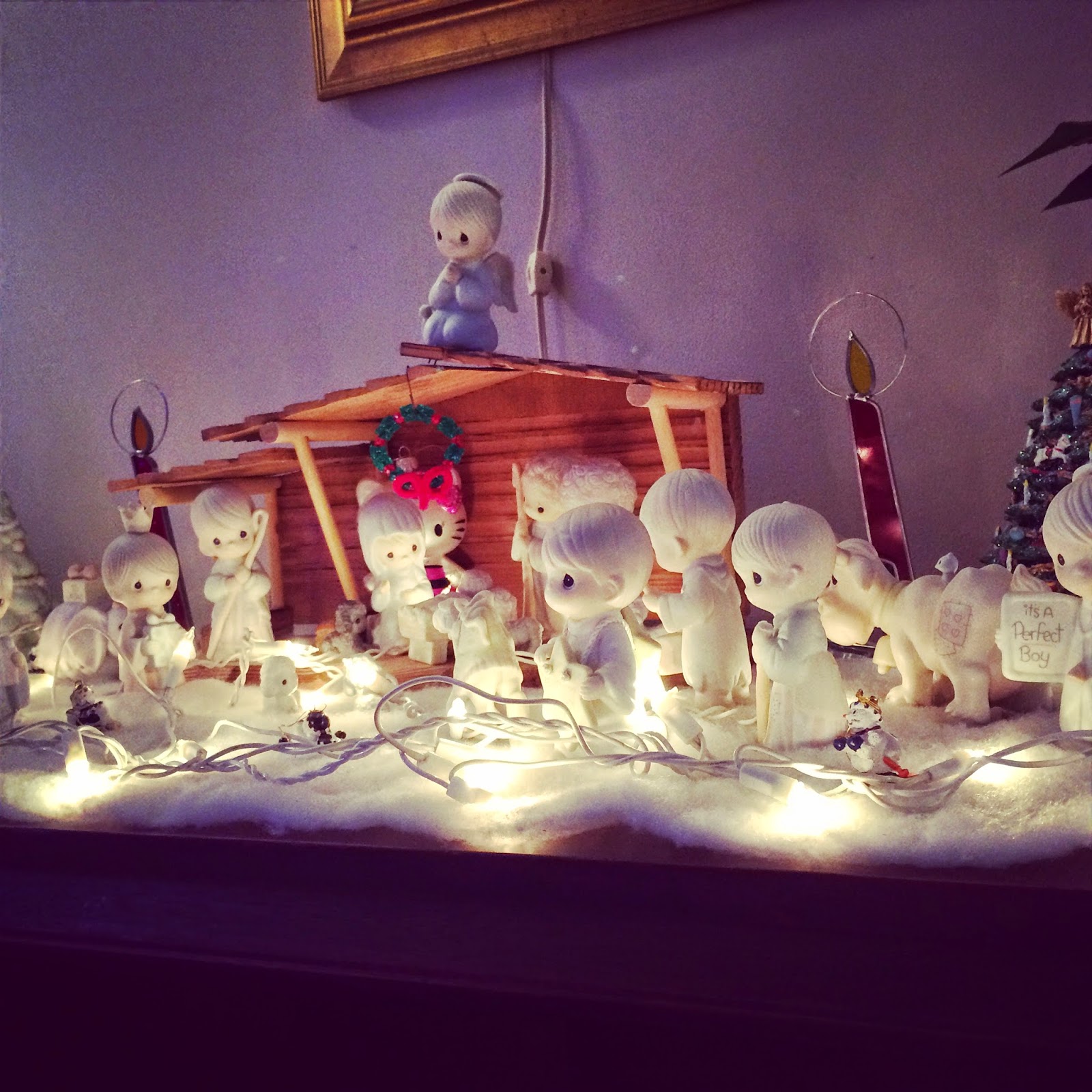 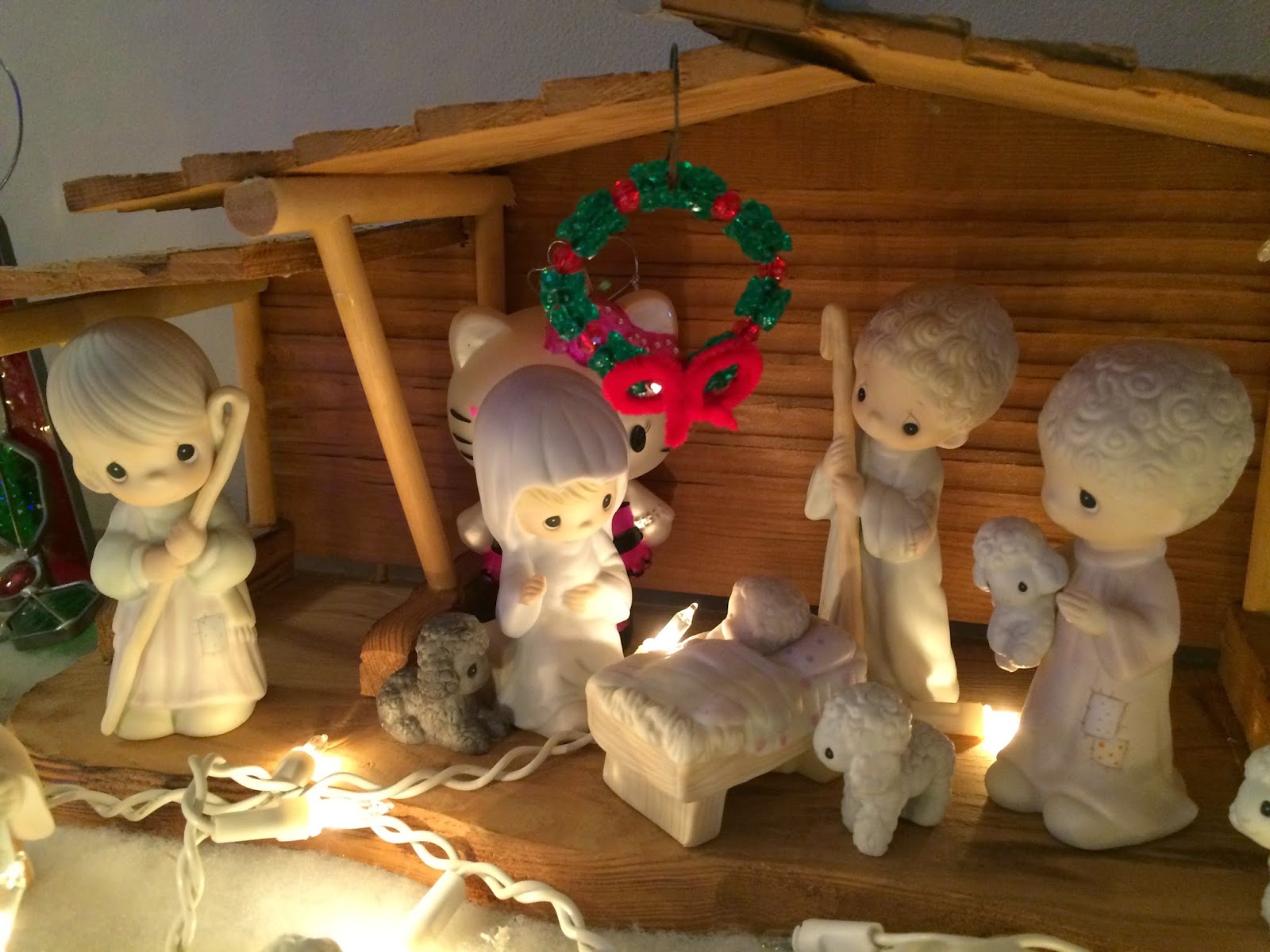 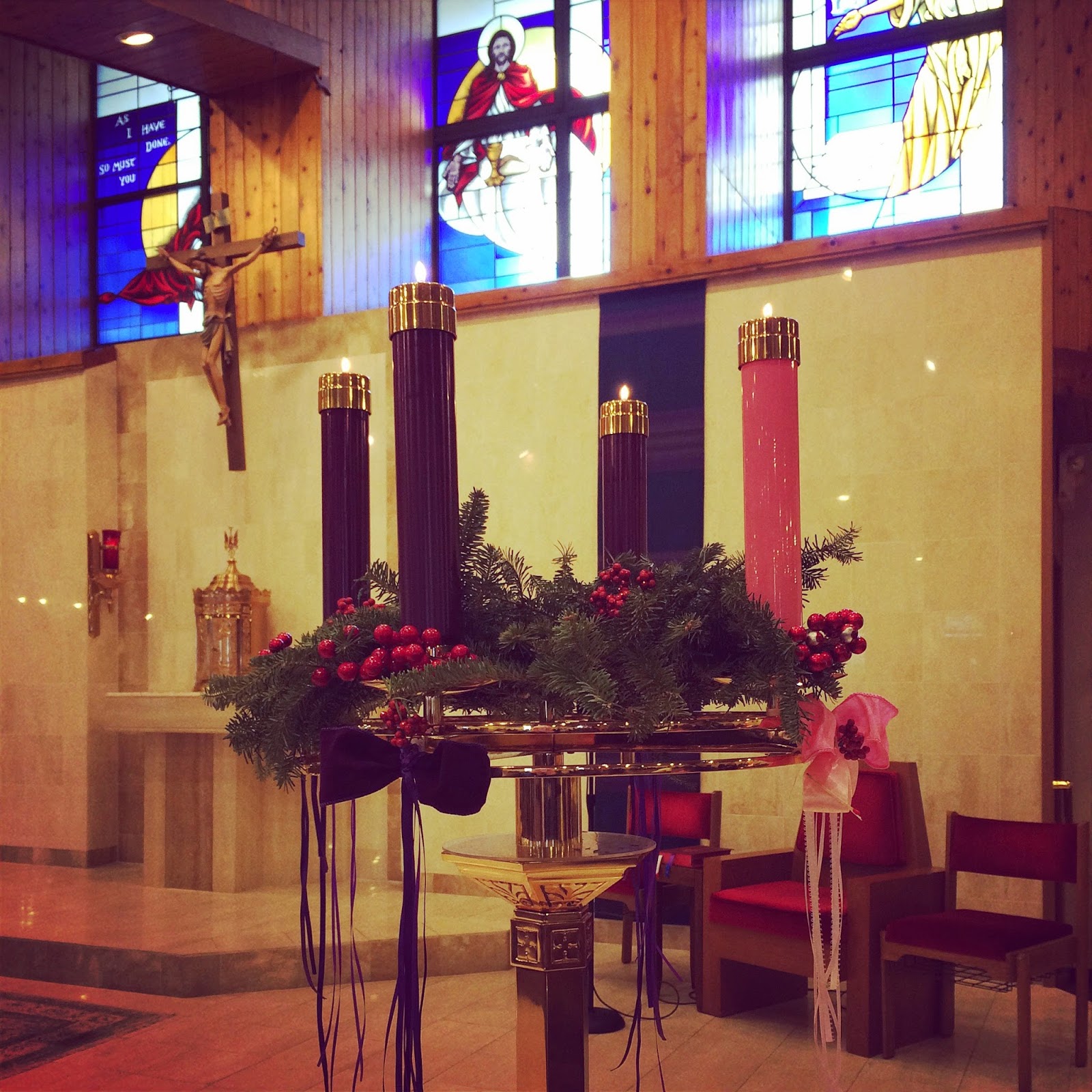 I mentioned a couple items in the previous update, so we'll start with Monday.  I sent a warning text to my siblings early in the week saying, "Frita, just came up from the basement with a roll of wrapping paper and tape saying, 'well, I think I'm finished.' “Here’s one the fun presents I saw on the stack. 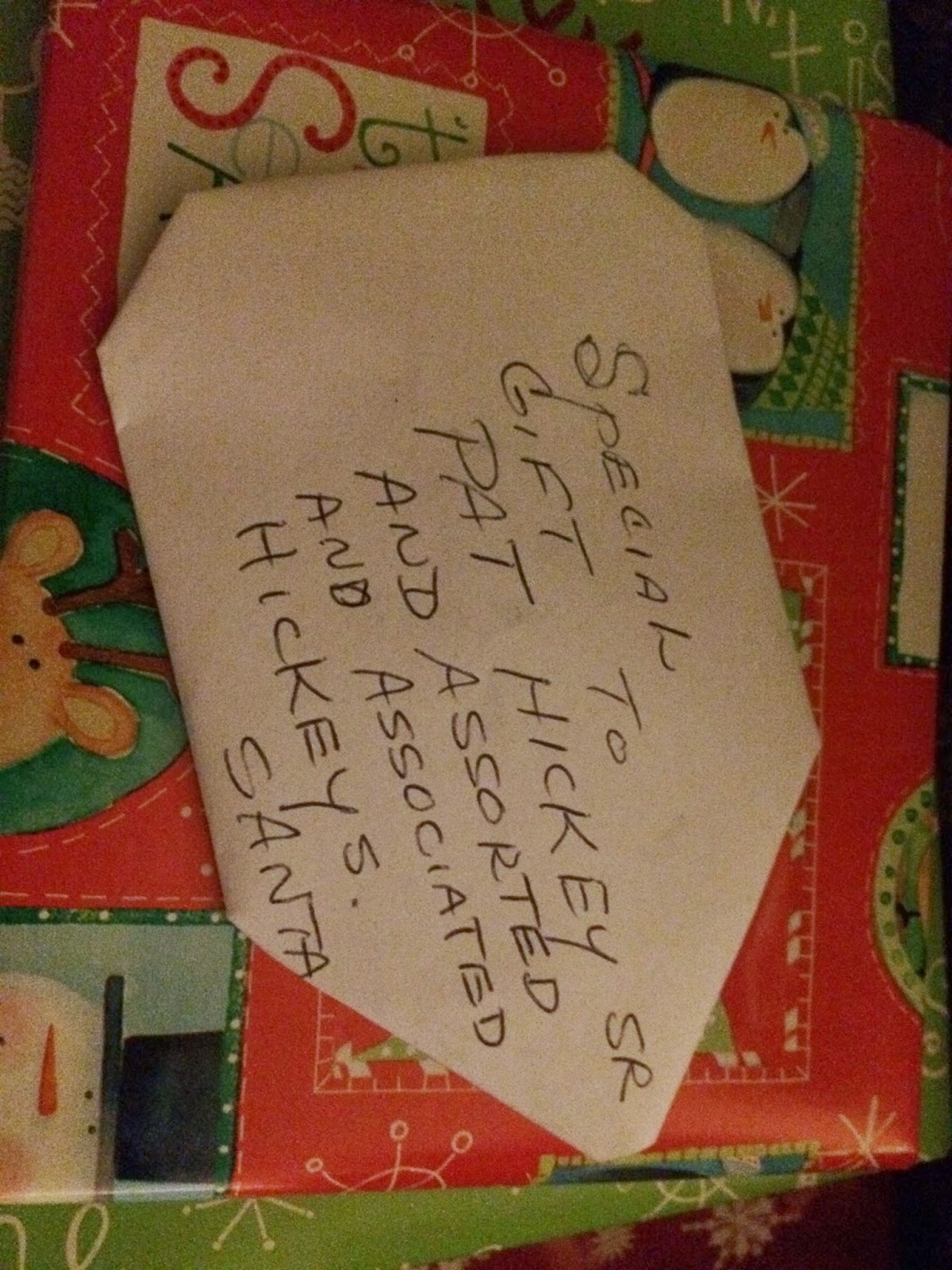 On Monday evening, Mo, Pat, the boys and I took the train down to the city to see the lights and FAO Shwartz.  Sean ran over after work, to walk with us for 30 minutes before he had to turn around and walk back 30 minutes in the other direction to meet people for work.  I was happy to see him, but I'm not sure he thought it was worth it.  At FAO, we separated one boy to one adult as they hunted down presents with the money from their grandparents.  I got to walk around with Kevin, and it was pretty fun, if I do say so myself.  Plus, being a tourist for a day is pretty cool - as long as it's just for a day. 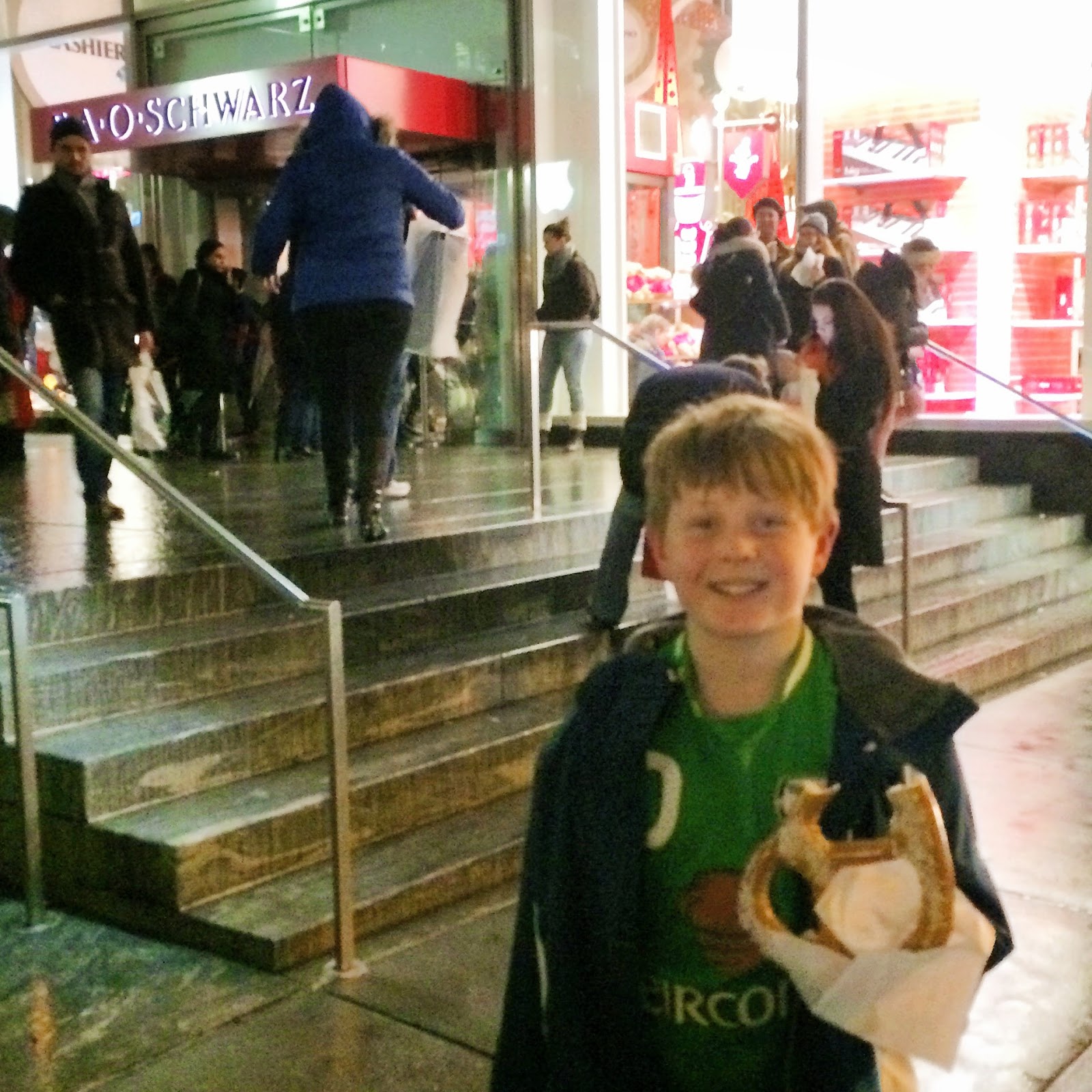 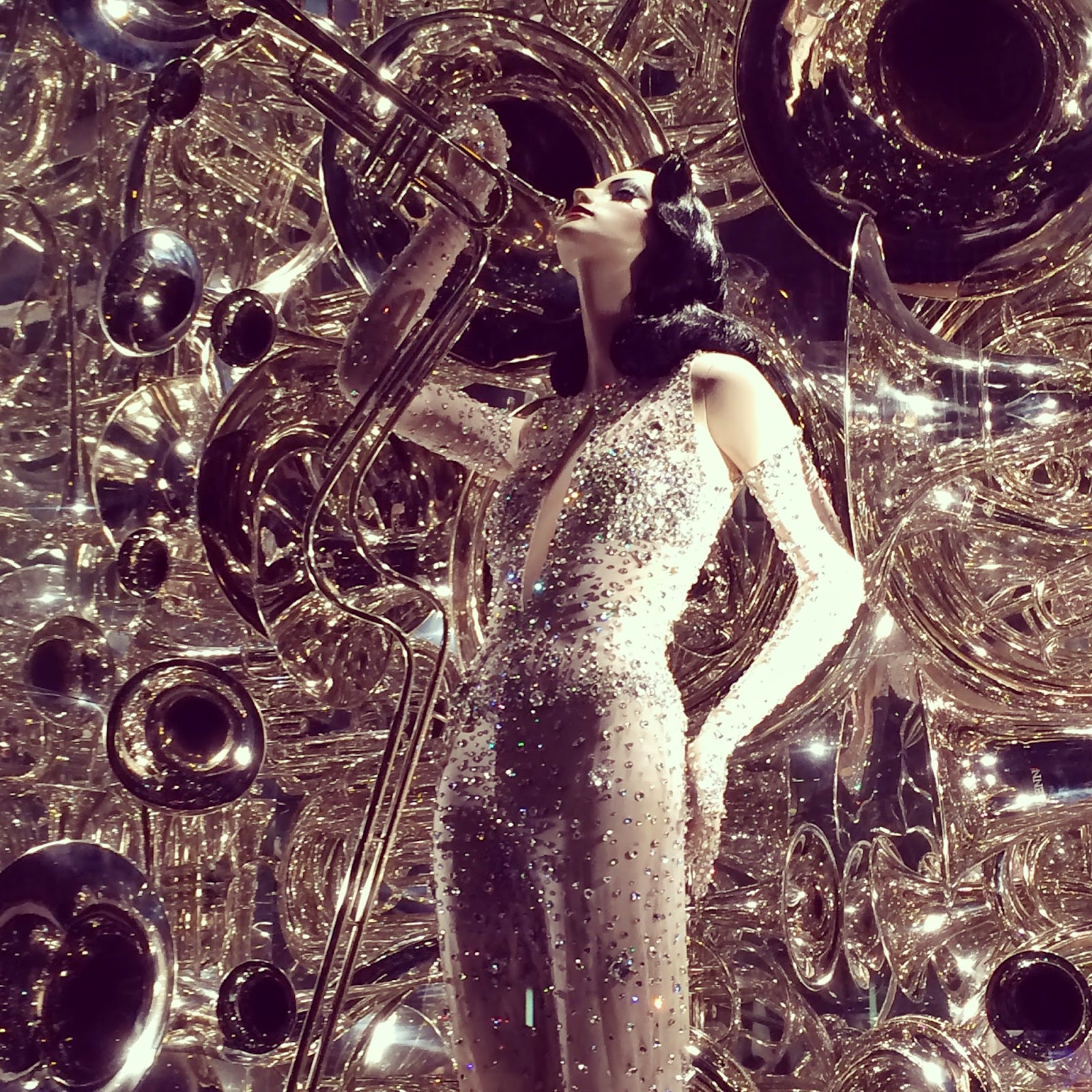 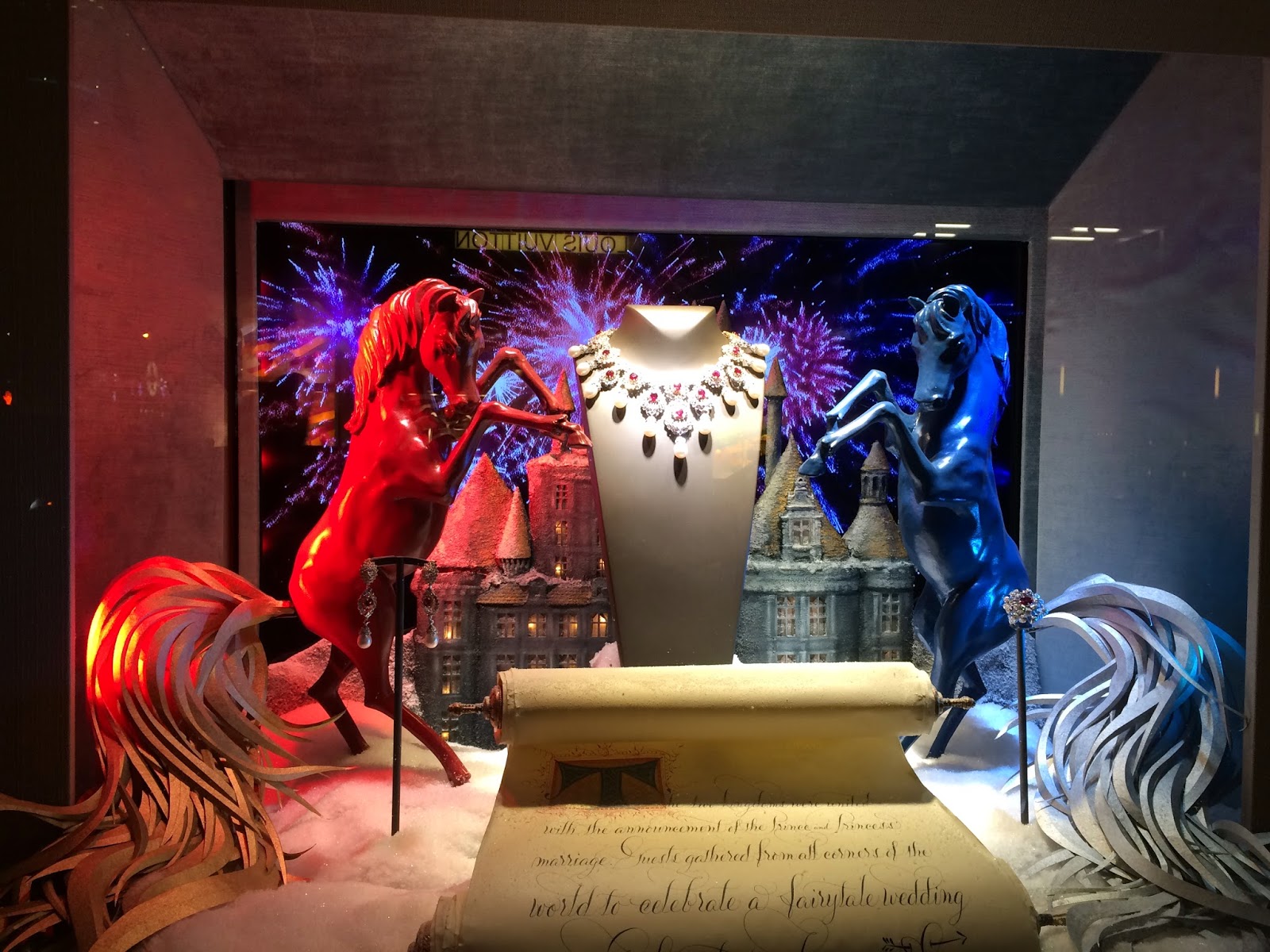 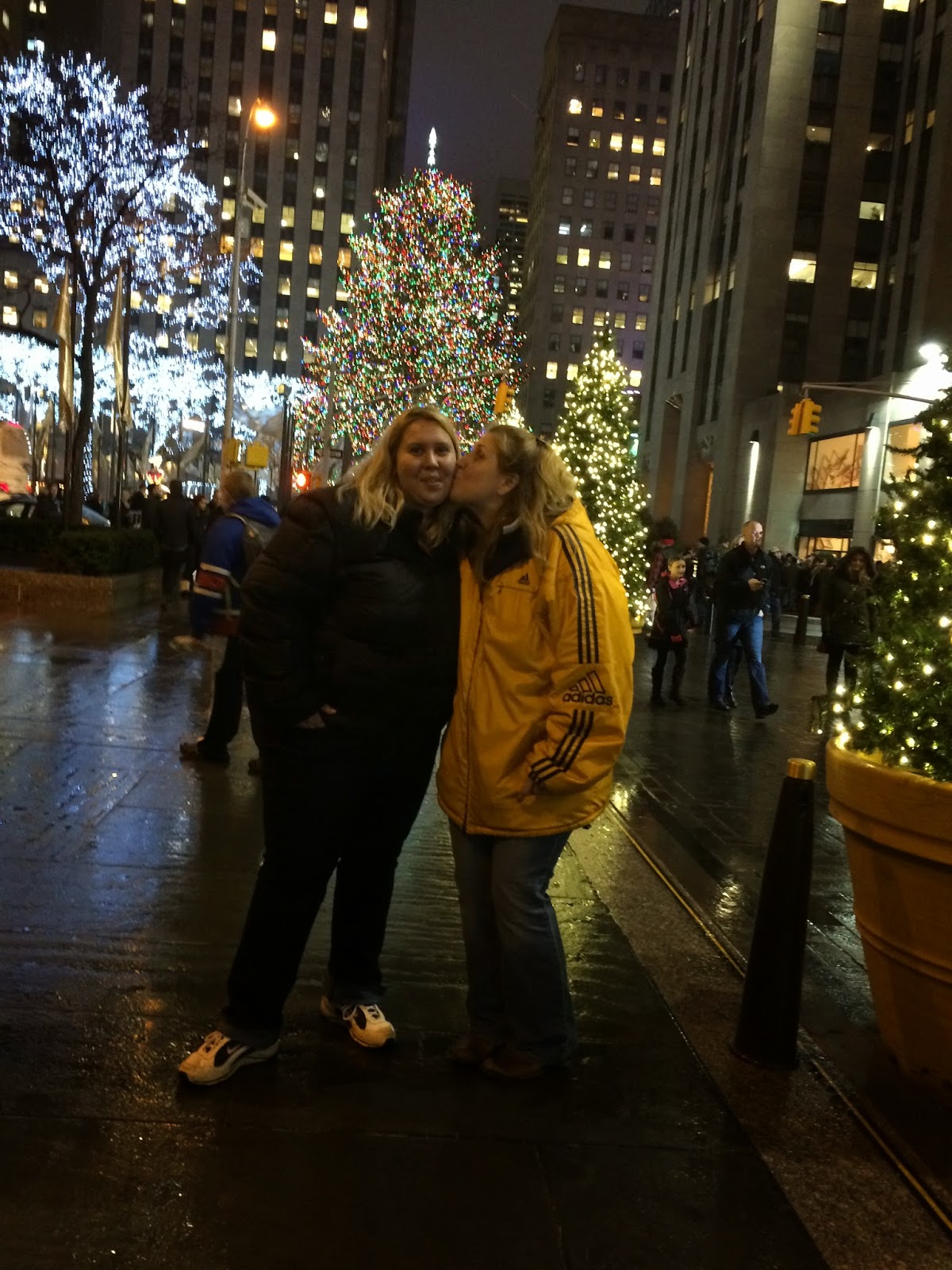 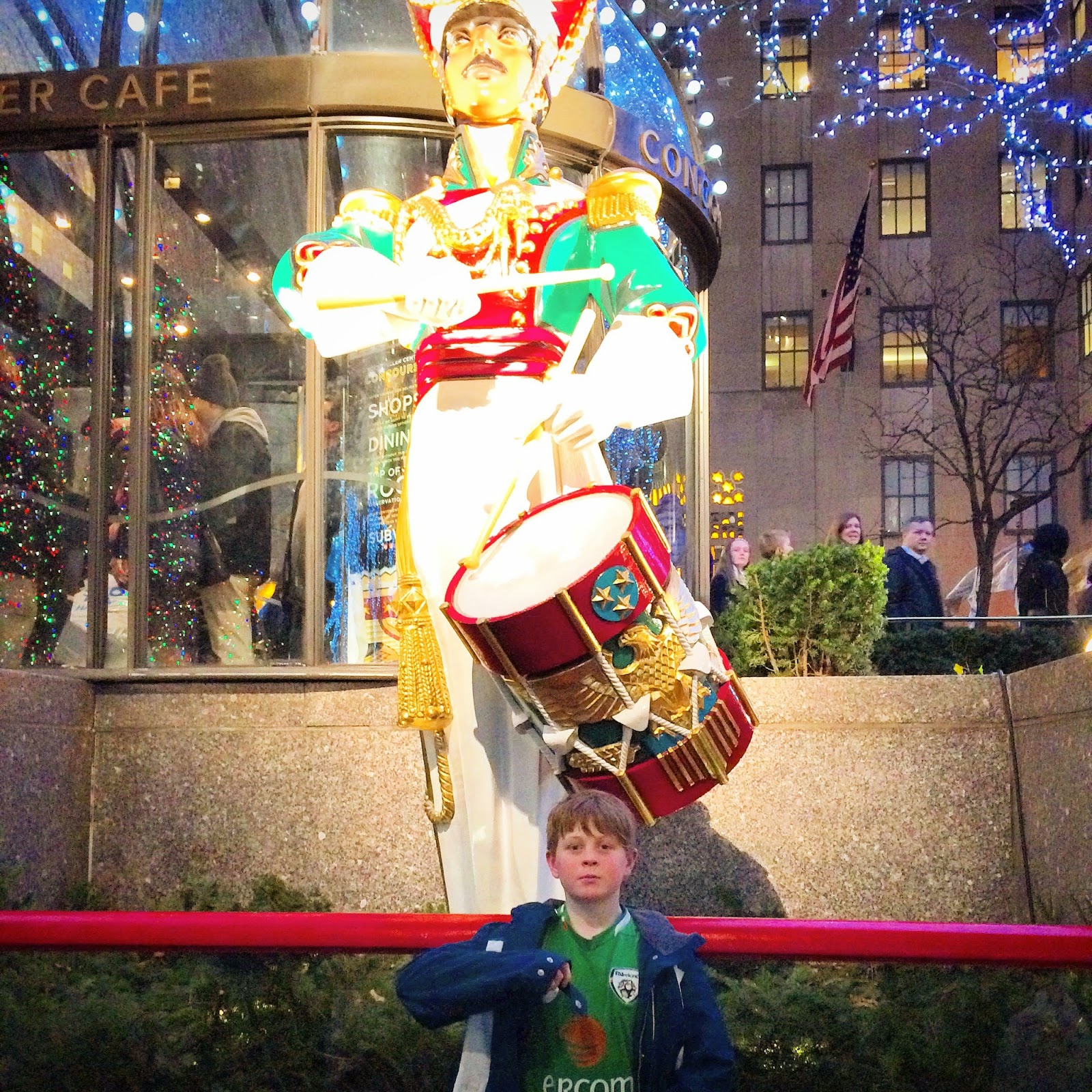 Tuesday we headed over to Sean and Stacey's to celebrate Sean's birthday.   Stacey made meatballs in the biggest pot I have ever seen. 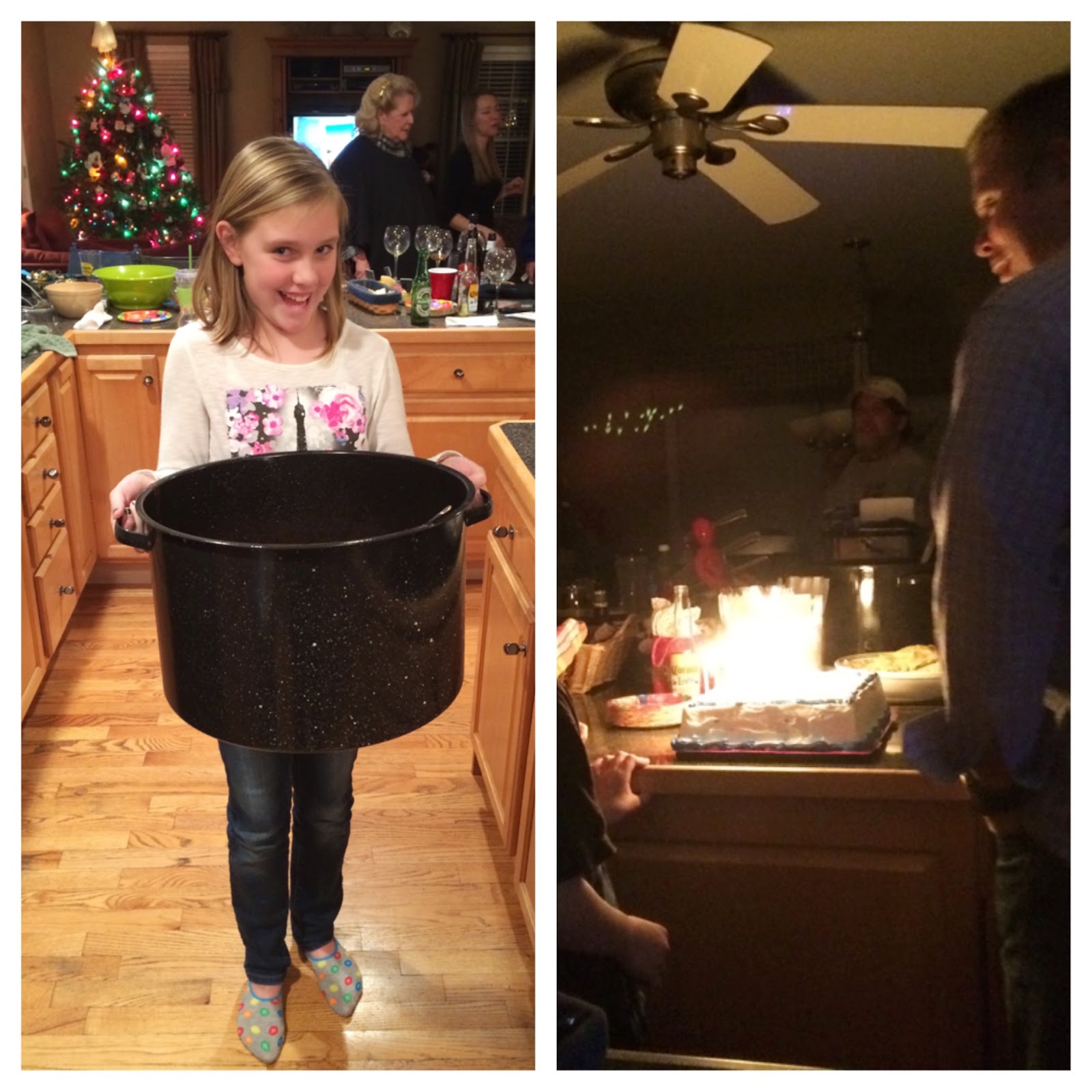 Me: What are you hoping to get for Christmas?
Morgan: A plasma ball.
Me: what is a plasma ball?
Morgan: It's a ball that lights up at the points that you touch with electricity.
Me: Oh! Are you going to get that from the 80's?  What else are you asking for? A cabbage patch doll and a lava lamp?

As Beth was leaving: I'm so glad you got to see me.

Me: Wow, Bails just said something that sounded exactly like Stacey.
Jackie: I know! It's like having two moms.  And now Morgan is starting.  It's awful.  The other day, I was walking up the stairs and she was all, "You better go shower."  I don't need that.

Carla and I spent some time trying to get Morgan to say all of the states using clues.  At point, when she couldn't get it from "place where potatoes come from" my second clue was, "Blank… Now you da ho!" I'm not a very good Aunt.

Jeff: We should be friends.
Me: We are friends.
Jeff: No, seriously.
Me: Seriously.  It's even facebook official.

Jeff: I told my wife we were going to Miami after Christmas, but I haven't bought the tickets.
Me: And you're still going?
Carla: Either that, or we'll hear Kasia's disappointment from across the street.
(They did end up going btw)

I told everyone that I was switching up the seating arrangements for Christmas which really ruffled some feathers.  I was quite pleased with the shake-up though.  Unknowingly, I put Frita, Bailey and Maureen on one couch and Jackie and I on the other which made everyone believe I was rewarding the Spanish speaking folks with couches... and maybe I was. 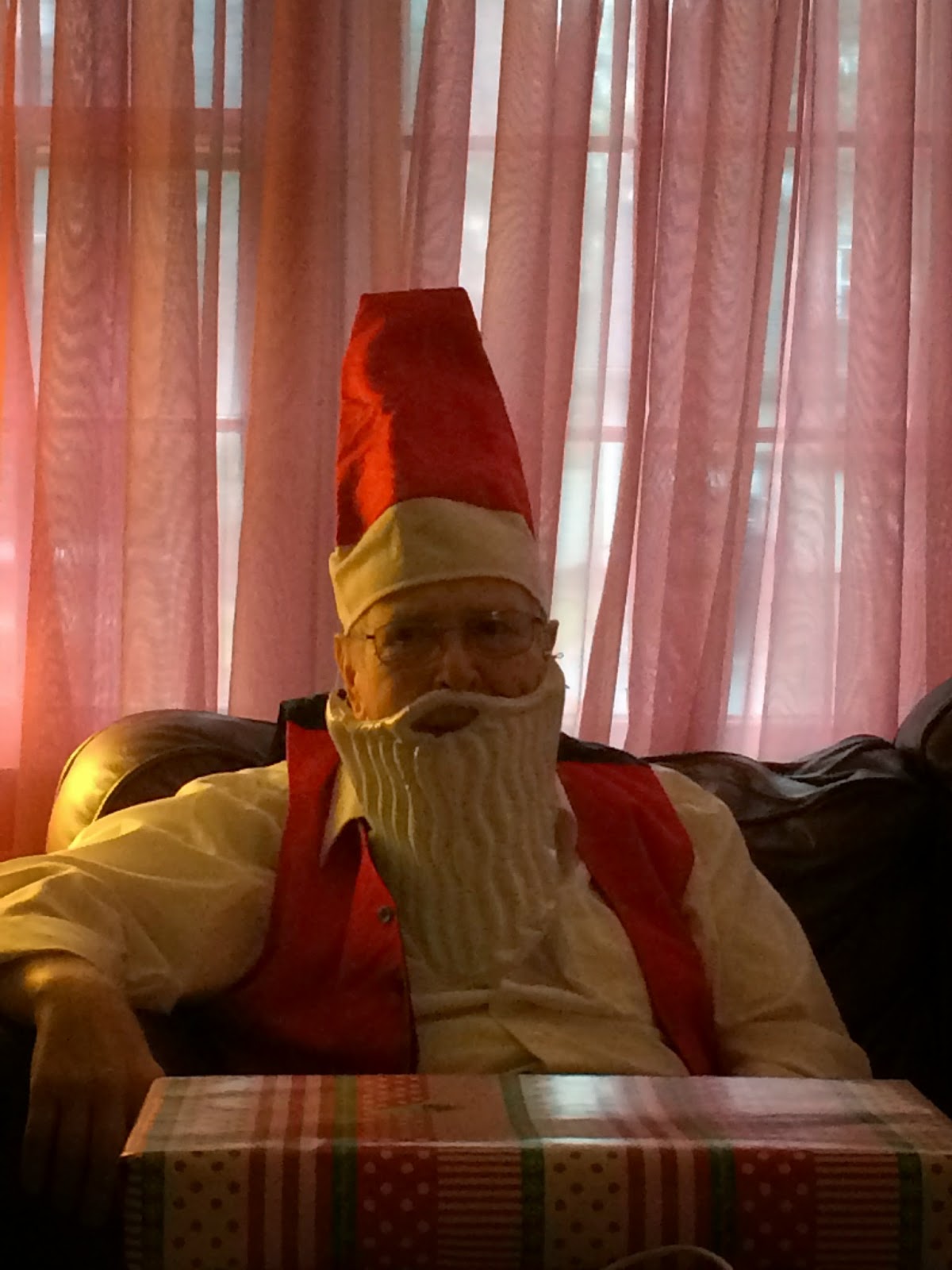 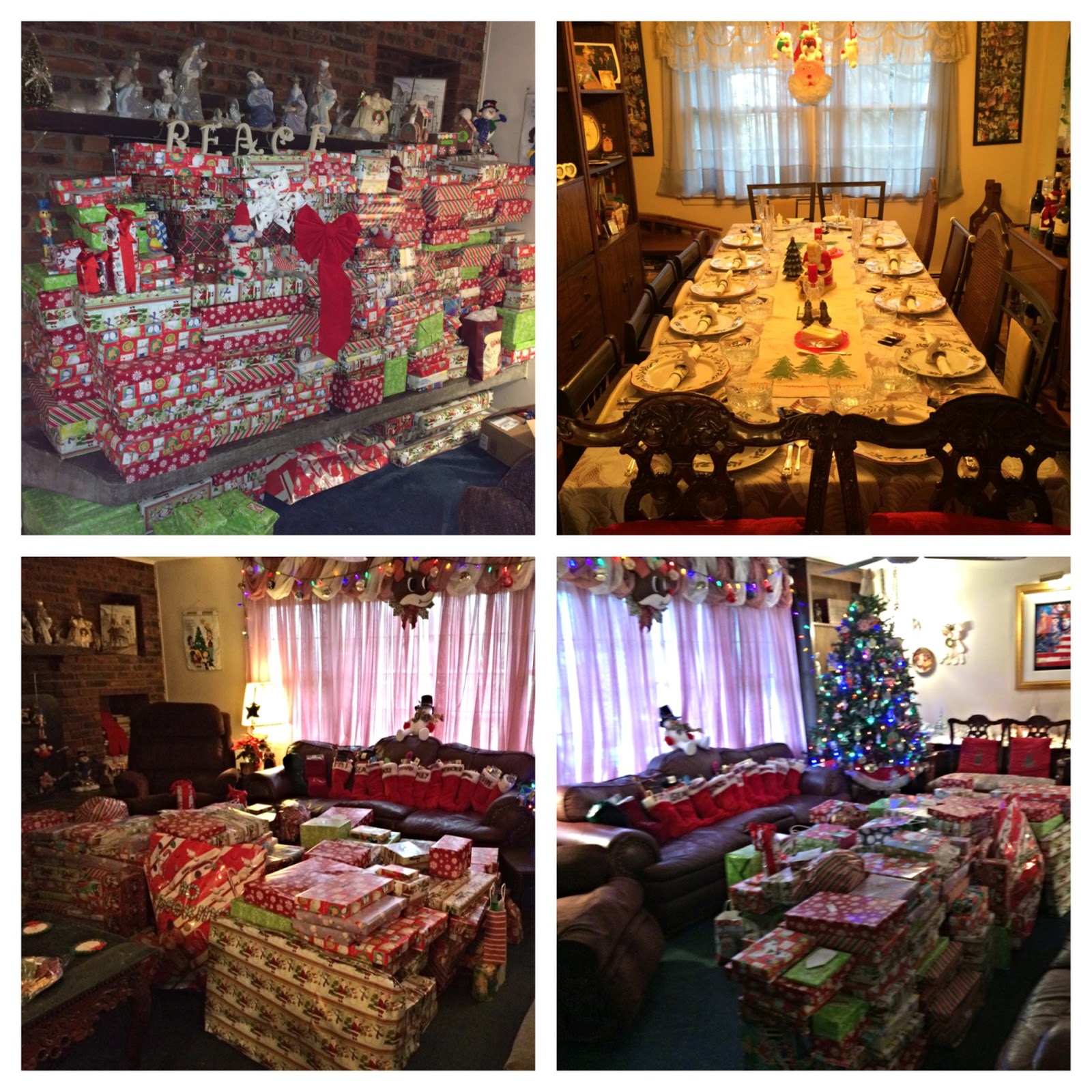 Morgan opened up a bunch of Chocolate.
Jackie: I wonder if she's a sharer.
Then Morgan passed around her gift.
Jackie: It's a Christmas miracle!

Jackie: I went to get my hair done and the woman told me that it looked like I had a squirrel on my forehead and my mom never told me!
Me: A what?
Stacey: She was talking about her uni-brow, but I think I would have noticed a squirrel.

As we were opening gifts
Stacey: That's why Sean is always so happy.
Frita: Why?
Stacey: He never sees the credit card statement.

Momela: What are you doing this week?
Bails: I have a lot of studying to do.  A couple of papers to write..
Jackie: I'm partying all week. 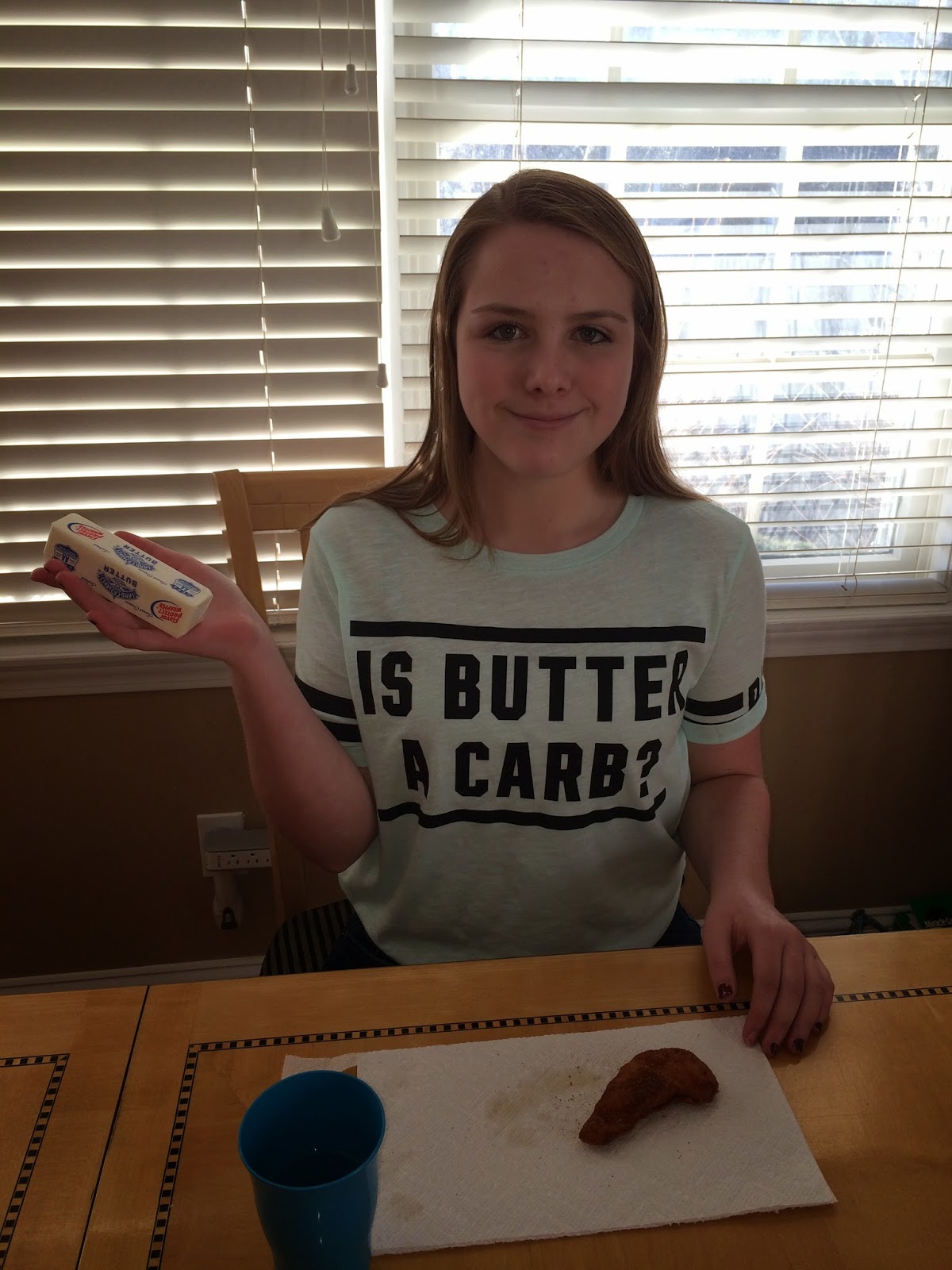 On Christmas we went to Mo's house where her in-laws proceeded to make me very worried that I was going to go on this trip and have to share a bathroom with a bunch of people and we weren't going to have toilet paper, and that was all after I got a blood clot on the plane.  In other news, dinner was delicious and the company was lovely.  :)

The day after Christmas, Carla and I brought the girls to the diner to give them their gift of Taylor Swift tickets (which they looked at puzzled before they figured out what was in their hands.  I think partially because Jackie was reading the side with the terms and conditions.)

Me: where did you get that?
Morgan: Christmas gave it to me.

Before we got the food
Morgan: Mom says we can't anything after this until dinner.
Jackie: Oh! We should go to Lil Sorento's tonight! And maybe go to Cold Stone too.
Me: You've got the whole day planned, huh?

Jackie: I am going to have an Enema party for my 30th birthday.
Me: I'll be in Seattle that day.
Carla: I'm working that day.
Jackie: Aunt Mo said she would go with me.  It's going to be great.  We're going to feel so clean!
Me: She's clearly a better Aunt than we are.

Upon our return to the house.
Stacey: How was it?
Jackie: I left a child and came back a woman.

I ran back to Mo's for a bit to see Cristi who was also in town with her friend James.
James: She asked me, "Was I sleeping?" when there was a pool of drool on the couch.
Don't you love when I share, Cristi?

Stacey got a massage chair for Christmas and Morgan was charging a dollar for a 5 minute massage.  Jackie finally took her up on her offer.  Sean helped by bringing over some apples to roll on her back, and apparently it wasn't the most pleasant - though to be honest I never heard Jackie's answer to Sean's, "How do you like them apples?"  At one point, Morgan really started to make it unpleasant telling Jackie it would cost her another dollar to stop.  She must of doesn't something awful because Jackie suddenly rose and said, "Permission to fight her?!"  Her request was denied, but Morgan still cowered while Jackie squeezed Morgan between her legs as she learned over to hug her mother sitting on the couch.  Sneaky. 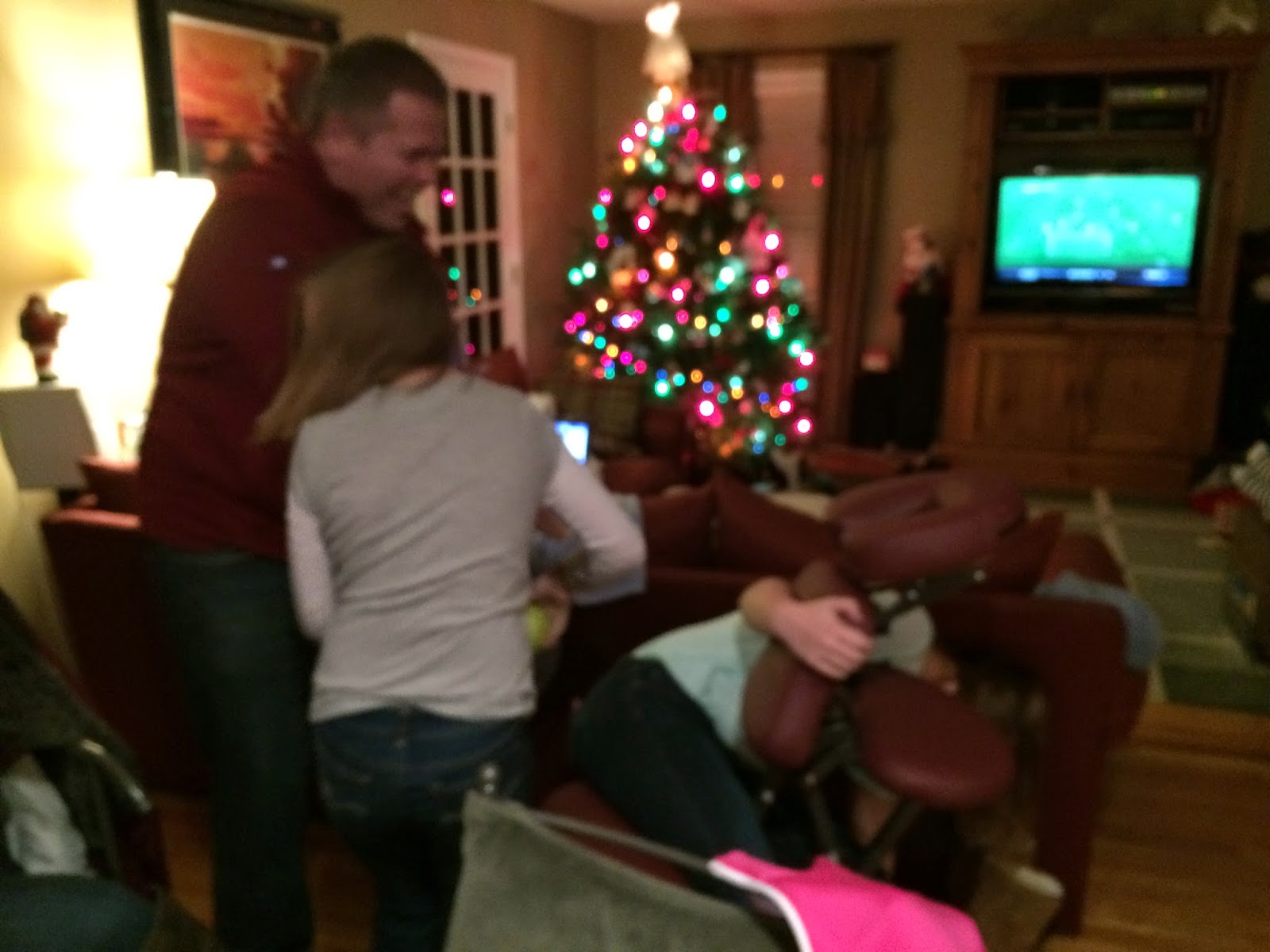 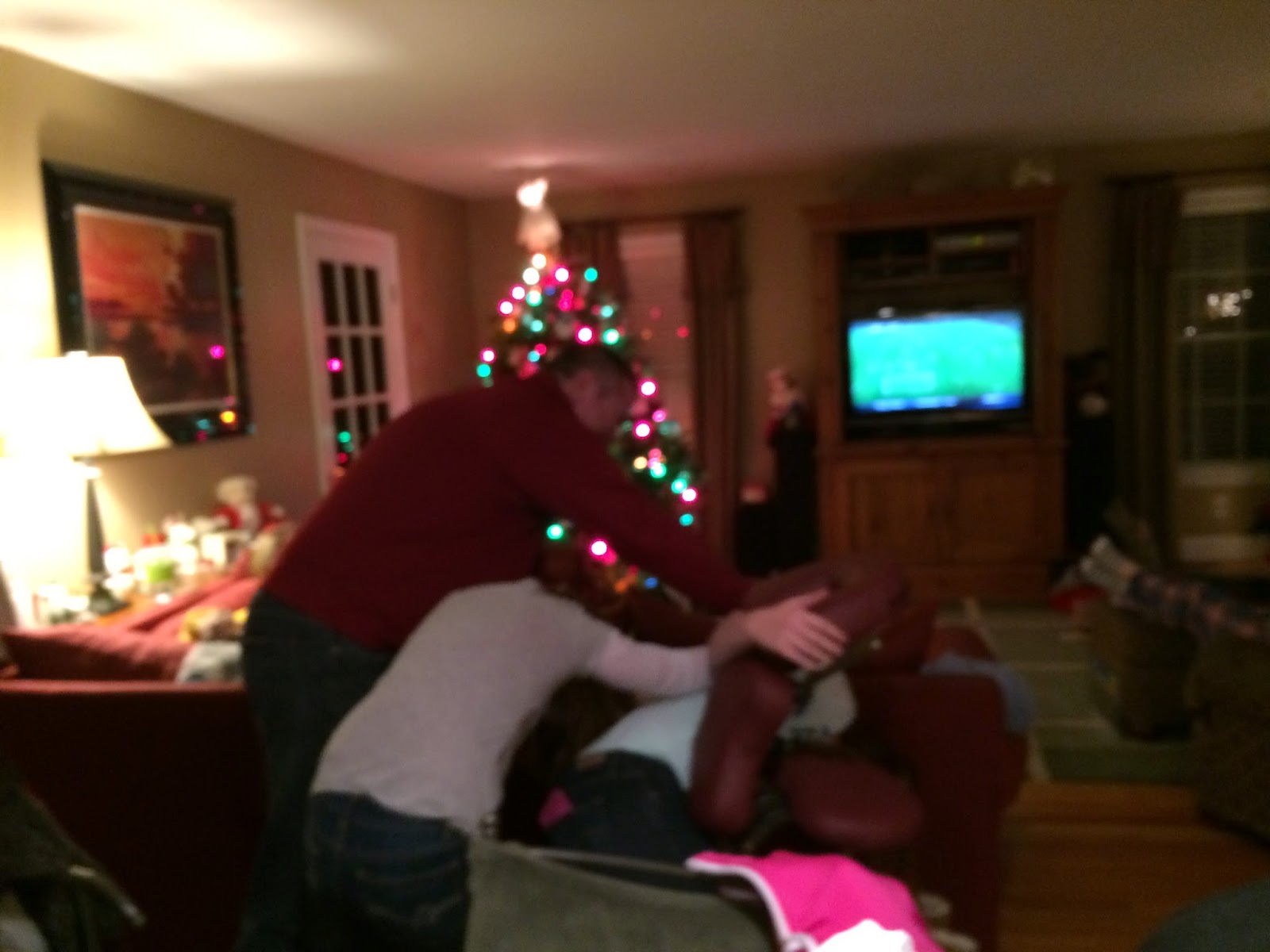 On my last morning, Mo took Percy for a walk with Bella (actually, Mo took Percy boy for many walks which allowed me to rest my foot because she is the best of sisters. :) ) On that particular morning, it allowed me to pack.  When she got back she came into the house with some beers saying, "Vacation isn't over until I say it is!" Yeah, buddy.  We played some more canasta, and before I knew it was time to get to the airport. 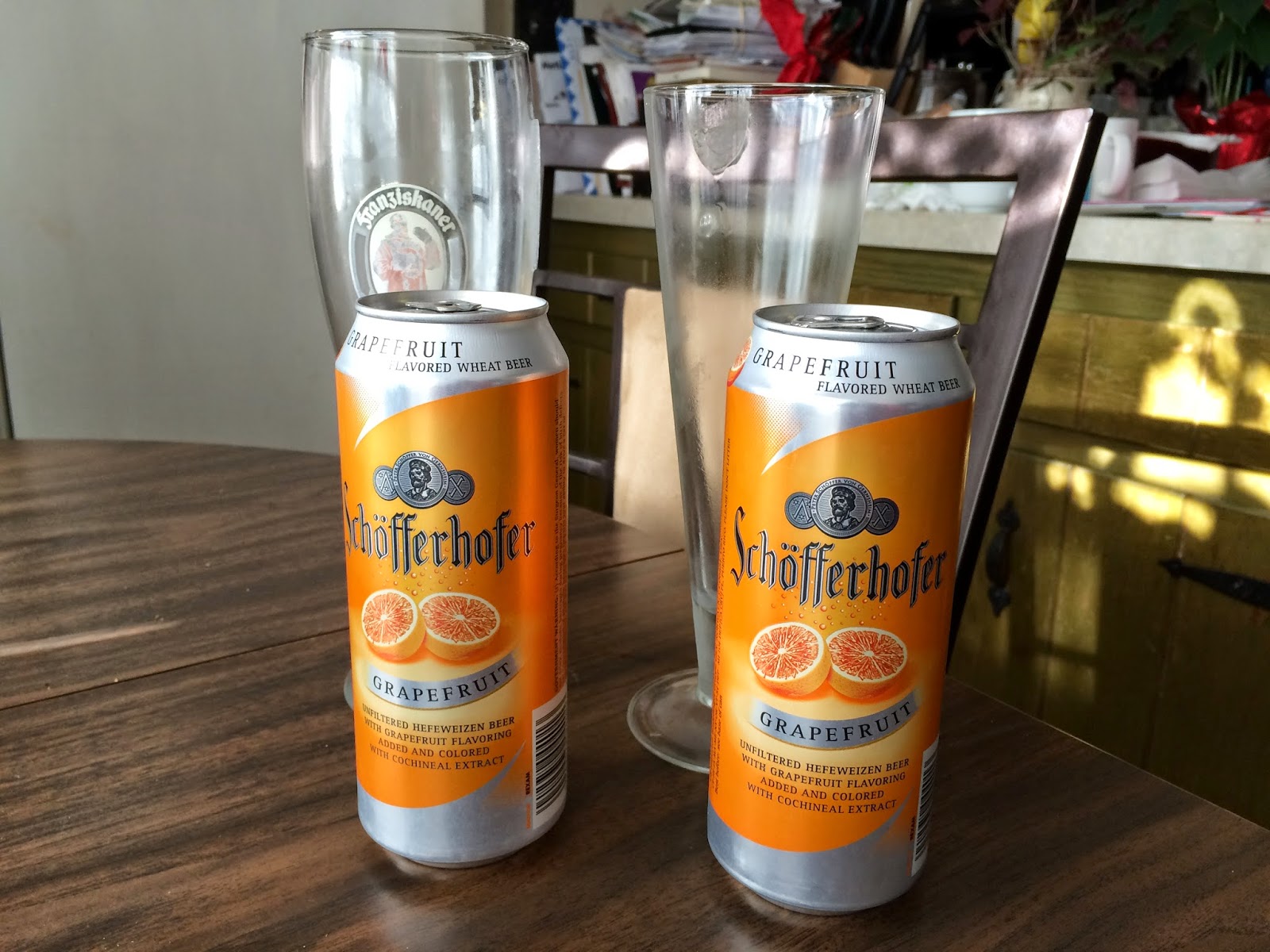 Sean tried to explain to me how Penn State was going to play at Yankee stadium, but I was still dubious. 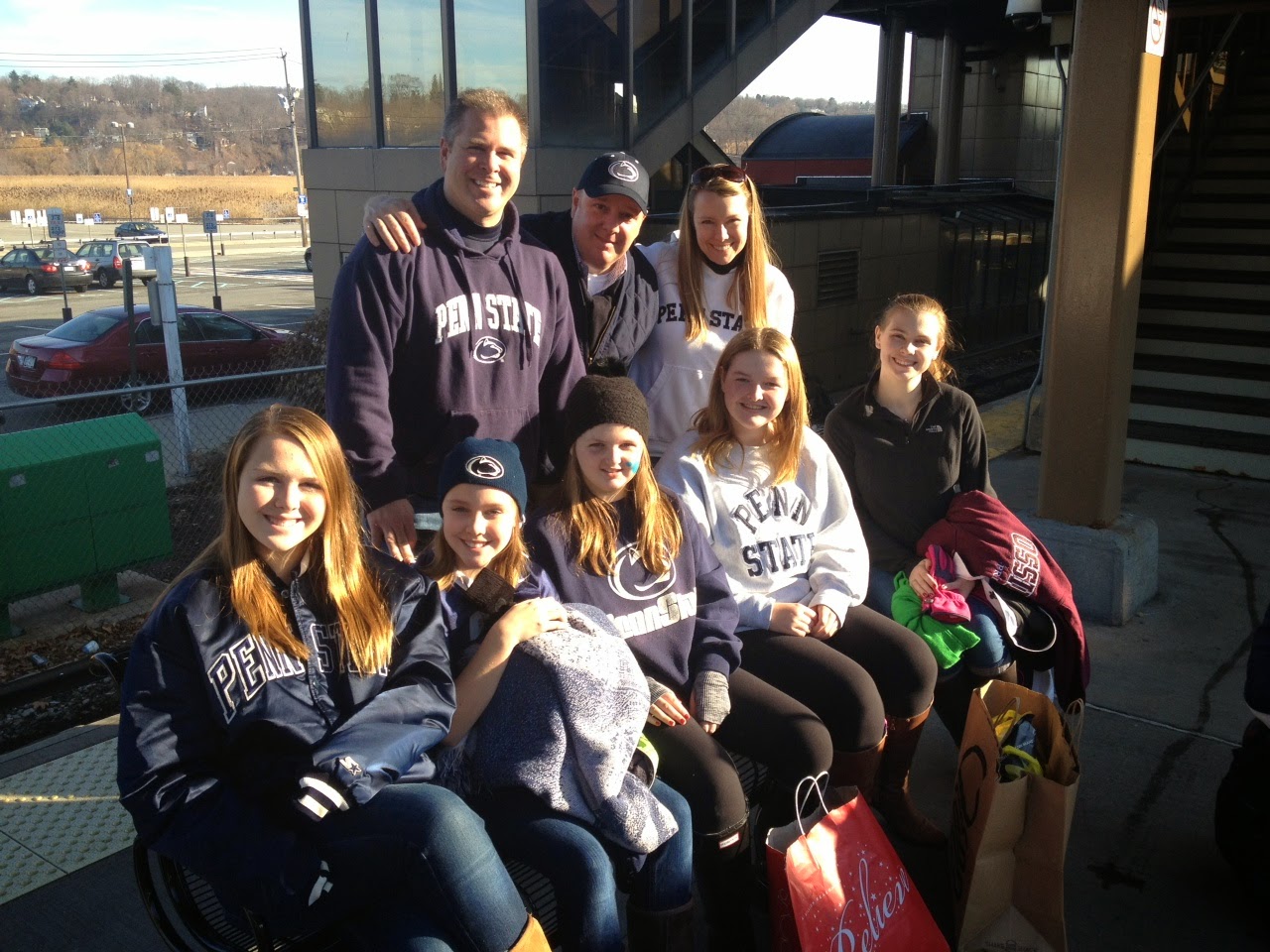 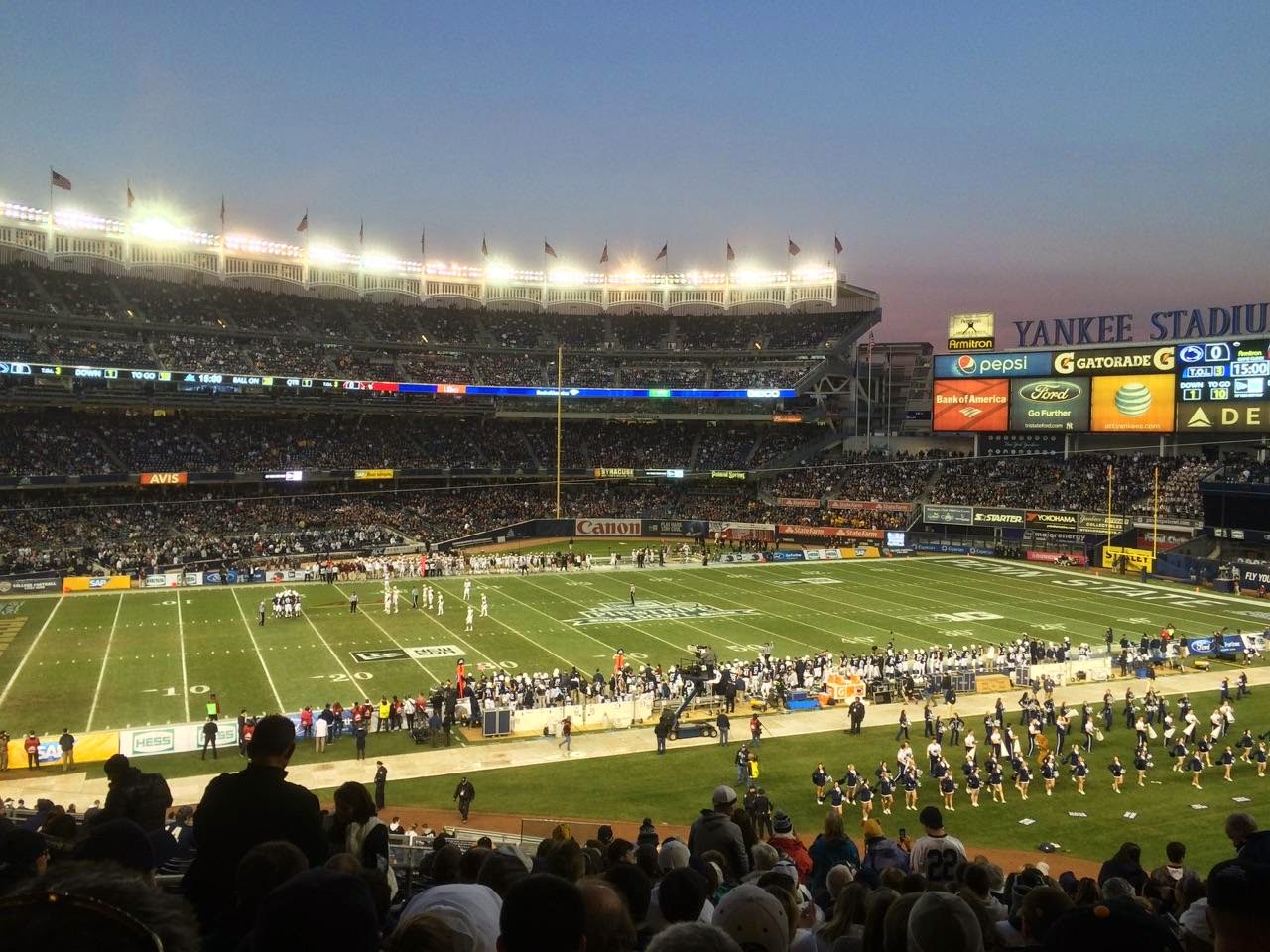 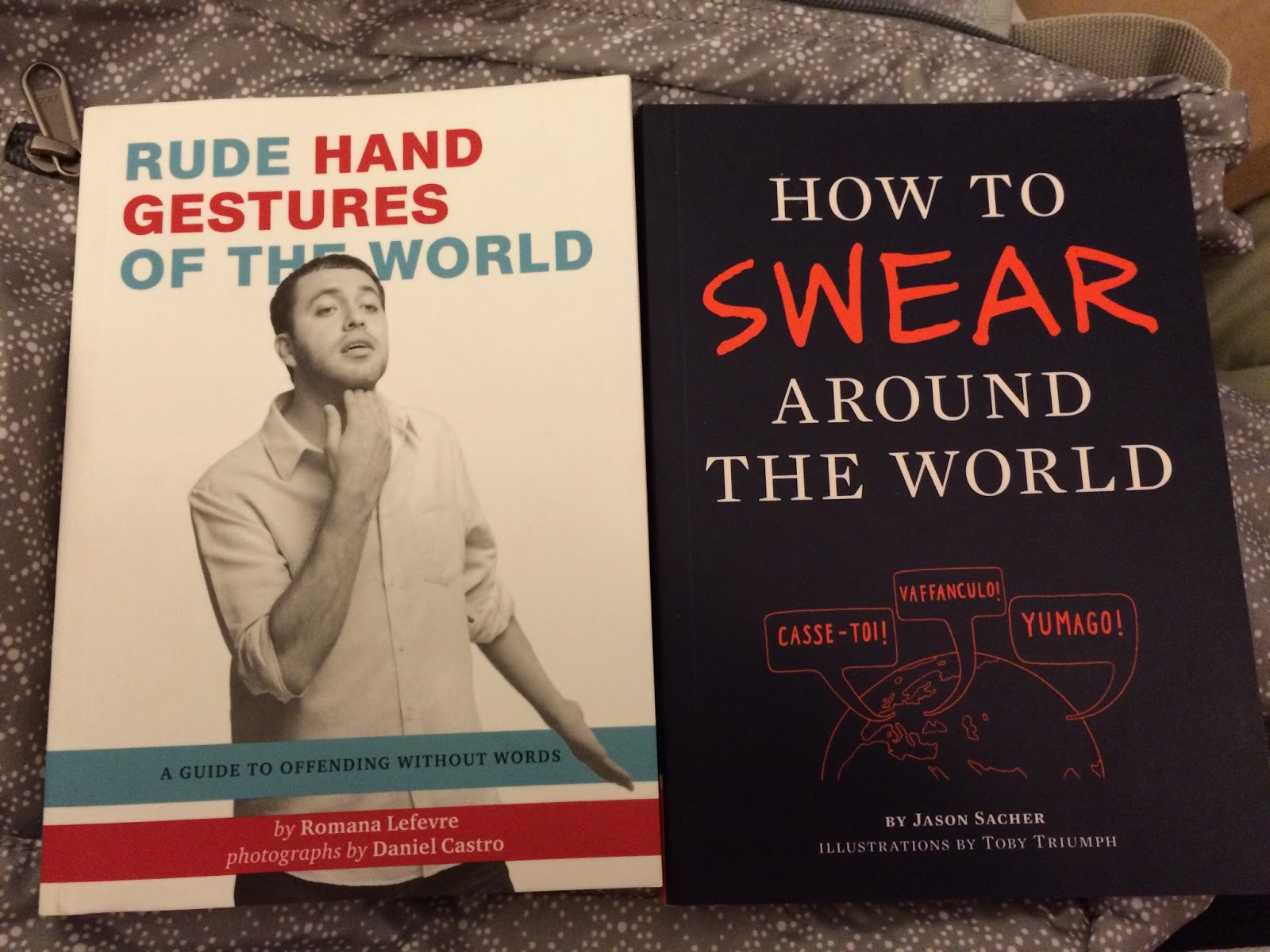 I got home and took care of the dogs, and the next day at around noon, Lucas came home to finally "take care" of the dogs and feed them, filling me with so much confidence in their survival when I left.  I helped him take the dogs outside.

Me: Percy is a past pee-er.
Lucas: He should put that in his resume really give him a leg up. 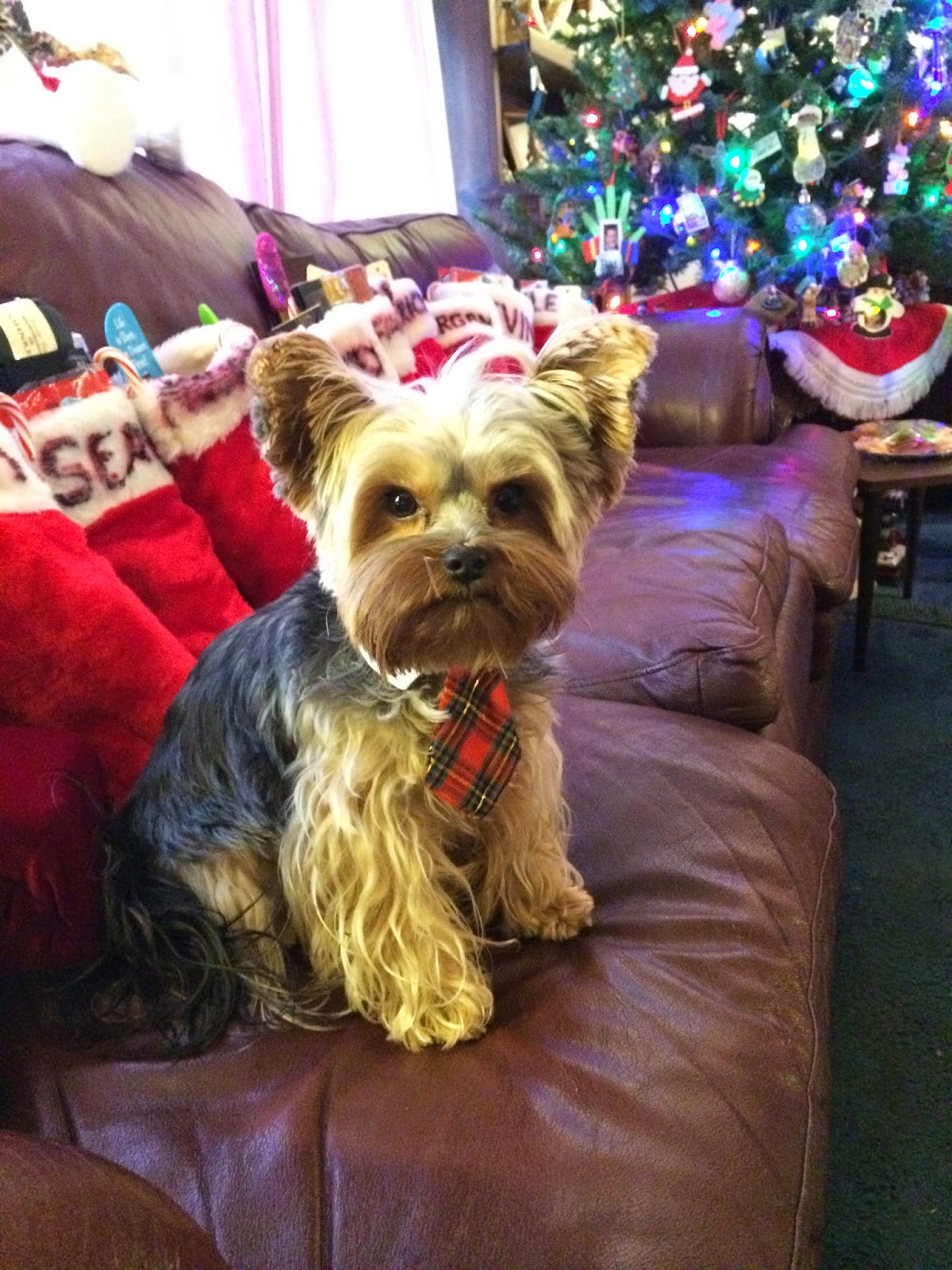 Later, Lucas drove Zach and I to the airport. I bade him farewell, and begged him to keep my dog alive until Dawne came home from Vegas, and then we were off on our grand adventure!

Posted by skcorynaffit at 1:56 PM