I've Got a Date For Valentine's Day! 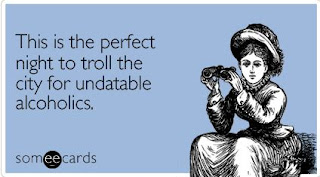 Perhaps my subject line was slightly misleading... as the "date" that I have for Valentines day includes several people from Blizzard that I have only conversed with over email and phone, and the other several people consist of my co-workers... but hey, if I was in love with World Of Warcraft, this could have been the night of all nights.  Instead, I am just going to hope that some of these strangers are extremely entertaining, and comfort myself in fact that I'm too busy and important for silly holiday's like "Valentine's Day" and "President's Day."
Last week was carazy!  I mean not exactly exciting, but just interesting enough to add an extra syllable to the word "Crazy."  I'll try to give you the gist of it without going overboard...
Tuesday Boot camp: The chick was late, so we didn't stretch.  It was an hour and half of intense, yet not terribly creative, workout with lots of sit ups and push ups.  Every time she yelled, I smiled at her... so I was smiling the whole time (to the annoyance of my workout buddy).  Not b/c I was happy, but b/c I thought it was hilarious that she thought we were going to do yet another round of whatever it was she was yelling about.  I can proudly admit that I did not cry, but three women did, and one almost threw up.
Wednesday: I was in a state of utter hurt in every muscle in my body. I struggled in vain to remember another time in which my body had been abused in such a way and came up totally blank.  As if this uncomfortable state of being wasn't enough, at around 2pm I started feeling nauseous and dizzy.  I thought it might be something I ate so I itemized my consumptions for the day: Two slim fast bars, Two cups of coffee, and a cupcake.  I tried to blame the cupcake, but as the illness grew, I realized it wasn't fair to the cupcake.  I don't know if you've ever been sick at work... but the assessment of the situation can really utilize a lot of your brain power.  You try to decide where the best place to get sick is, if the need arises... and then start calculating your trip home, trying desperately not to have some horribly embarrassing mishap between where you are, and where you need to be.  Knowing that the final destination was a strangers apartment, with a bathroom smaller than your average cruise ship, was not making me happy either.  Suffice to say the not so friendly stomach virus that I had did not make my second night in Hell's Kitchen the dream situation as I had hoped.  Oh, did I mention the aching body that I had at this point? and that every hour the pain woke me up as I stupidly tried to change positions in my bed?  Lovely.
Thursday:  Feeling slightly better, and not willing to take a day off of work, I decided to head to the office, albeit slowly b/c the rigor mortis in my muscles was still showing its true nature.  Shockingly I decided NOT to go to class two of Boot camp, but did meet up with my brother after work.
Friday: Had my first day working for DC Comics and a convention... to which I was totally hazed when they had me place the name cards by all of the pieces in the show case (man do I hope someone double checked everything.)  This is where I digress for a bit... there is this guy that works in the office across from mine... and he's super quiet... which to me just screams a challenge.  So every day when he comes in... I always greet him with a big cheerful "Good Morning Adam!" plus, the printer is in his office, so he's basically a sitting duck to my enthusiasm... poor poor Adam.  My strategy in friendship making is to share crazy/I think they're funny stories with anyone who seems even the least bit receptive.  If these people then reciprocate, or come back looking for more, I know I've won them over.  If not, if they truly think I'm a loon, well then it wasn't meant to be.  Given that strategy, three of these people came to visit and chat with me at the con while I was stuck behind the counter, and quiet Adam brought me coffee... and my one and only friend making strategy has won again.
And basically, other than the one night where I saw my roommate on my rush to the bathroom saying "I'm so sick, sorry, I am seriously sick" and then almost passing out in the bathroom... I haven't seen my roommate at all... I must seriously be either the weirdest, or the most awesomest roommate that this guy has ever had.
Saturday my mother said to me "So it sounds like you had a really great week in the city."  I don't think she was listening to me very carefully...
Posted by skcorynaffit at 4:20 PM