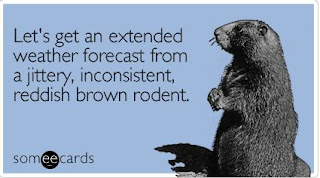 Roy and I did always want to go to Punxsutawney PA during college, but then, when we thought of it in time, and had a completely free day to drive out there, we realized that we were wrong, we didn't actually need that experience to make our lives complete.
Remember that zip up that I got during WWTexas with Hell's Kitchen on the back? And remember how I used to say, ya, my grandmother was from Hell's Kitchen?  And remember how my dad always said that she was always trying to get out of Hell's Kitchen? Ya, well, I'm subletting a place there for February. 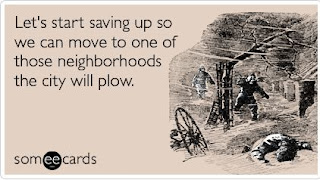 My February already sounds hectic with lots of late nights and working weekends... so I decided not having to commute back and forth would be both convenient and a chance for me to brave, and possibly embrace, the true New York experience.  Basically this guy's apartment has an extra furnished room... and while my mother was slightly apprehensive about me living with a stranger, Mo's evaluation that I "could take him" if it came down to it, made everyone feel much better. Plus, the kitchen has a chalk board and he said I could draw on it as much as I wanted to.  I also asked some police officers about the neighborhood, and one of them was very good looking... oh and said it was a relatively nice place to live.
I was going to wait and complain about this next week, but then I realized I could tell you about it today, and then I could complain about it NEXT week... solving the very difficult information control issue that I was having.  I signed up for Bootcamp.  No, not the army, don't be silly. (Although, I have considered joining the army, or some kind of military something to a) see how long it took them to throw me out of bootcamp, and b) b/c I think there are a lot of interesting non-fighty, behind a desk kind of jobs that are available... but then I started thinking about how I cry when I even think someone has possibly used the wrong  tone of voice with me, and decided I probably wasn't cut out for it.)   As I was saying, this chick at work who I am going to call my friend, invited me to do this 6 week bootcamp workout class with her.  While I determined that it looked hellish, I also determined that I was in way better shape than she is, and if she could make it, I certainly could suck it up for a couple classes.  Plus its only a block away from work so I won't have to walk too far.  :P  (Side note to Eva: The word I was looking for was cynical.)
I bought my first shirt with the lil thumb holes, and seriously how did I live without these?  I need them on every shirt and if that means I need to start cutting, I will.  My fashion industry gurus: Is there a technical term for this bit of fashion?  Can I just google thumb hole shirts and start clicking away?
Who's excited for the 3-D Chuck tonight?  I got a lil nervous about finding 3-D glasses until I scavenged through some of these DC Comic books to find a 3-D issue that provided the proper eye wear for the event!  Z100 this morning had a commentary about 3-D which made me a lil miffed b/c while they enjoyed the concept of 3-D TV, of all the MC/DJ people, none of them could name the Disney movie (Monsters Vs Aliens) from the commercial that they were oohing and aaahing about, and then none of them even watch Chuck normally... so they made the content more of an afterthought which really burns my biscuits.  I could so do Elvis Duran's job in a heartbeat.
And lastly... it is 37 degrees out in New York... and compared to what it has been... it feels like 60 degrees... and sunny... which essentially makes New York City a hundred times more pleasant.  Or maybe its the thumb hole shirt... I can't tell.
Posted by skcorynaffit at 5:30 PM