Hi Friend,
Consider this an “extra” email for the week of Aug 23rd.  I know you don’t care about my system (you’re just thinking why so many emails Tiffany? Don’t my attention span isn’t this large?), but I need to keep these updates in order with some kind of system just in case when I die someone wants to write a Biography of me and is too lazy to actually do any research and wants to cut and paste these into a delightful read.
The summary for the rest of the trip is that we spent it in Vienna.  I met Eva’s 90 year old grandmother Karla, hung out with her dad, Peter, met Eva’s Aunts and all of her cousins.  My favorite german’s flew out to Vienna to play (Julia and Kathi) and we basically saw some sites and then hung out drinking wine, coffee and beer for the rest the trip.  I learned 9 new German phrases, saw a couple more churches and palaces and hung out in some parks.  Met a butterfly or 2 and it was awesome.  In lieu of trying to describe every minute I am going to give you some random quotes and hope you find them as amusing as I did.
When we arrived to Eva’s grandmother’s (Karla) house she said, “I’m making lunch.  I don’t know if you’ll like it, but you’ll eat it.
On her son Peter, when he left the room and it was just me and Karla:
Karla: I’m being punished.
Me: What?
Karla: I’m being punished.  Three weeks with him!
(She would then intermittently just turn to us and say “Three weeks!”)
Karla: I’m trying to cook and he’s asking me about how my parents met… I don’t know!
Karla: Have some cake.  It’s okay if you don’t like it, I didn’t make it.
Karla on son-in-law: No woman with eyes would think he is good looking.  He isn’t manly.  You don’t know, you aren’t a woman.  His hair – like this (gesture)- always looking greasy.  He needs to wash his head.
Karla on cousin’s wedding: It was so funny!  He took HER name and then signed it wrong on the paper!
Karla: My husband loved washing dishes so he wouldn’t buy me a dishwasher.  He’s been dead for 22 years now so I’ve had to wash my own dishes for 22 years.  I hate washing dishes.
Peter had lost his luggage so I offered him some clean T-shirts, but he refused one saying “I can’t wear a shirt with a GIRL on it!” (It was a beer and scotch festival T-shirt btw)
Then, at the 90th birthday party, he complained about having to wear Yankees and Albany T-Shirts, so naturally I said: Look around you Peter. I’m the only one out of every one here who even offered you a clean shirt.
After Kathi explained a fascist party poster I said: I think I got that from the Hitler mustache and the word “Nazi” written on it.
Kathi: I think I might be a lot funnier in English.
Johanna: I’m next to the sex shop.  Not in the sex shop.
David showing us a picture of his son’s first bike ride: See that (graffiti) above his head with an arrow?  That says “Shit day.”
-Is that Mozart?
-He’s got a Violin though.
-He was a prodigy, he played everything.
-Okay, It’s Strauss.
Me: Is that why when I was driving over 170 kph the car started shaking?
Karla: I think Johanna is the only wedding for my grandchildren I’ll ever go to.  None of you are going to get married.  Look at you (Eva).  So skinny.  There’s nothing for a man to touch.
Ferdinand: Did you leave money at the bar?
Me: No I did that on purpose.
Ferdinand: You left 2 euro on PURPOSE?!
Peter: "You have to give Tiffany credit, you know."
Eva: For what
P: She went to all those countries not knowing one word of any of
those languages!
E: Me either.
P: No Eva.. You have to give her credit!!

Later...
P: And do you know what else you have to give her credit for?
E: Walking around with her foot?
P: No. The GPS. Knowing where to go!!
E: That's what the GPS does... It tells you.
P: Give her credit!!
At one point Eva tried to get peter to take a picture of us.  After 5 full minutes, this is what he took: 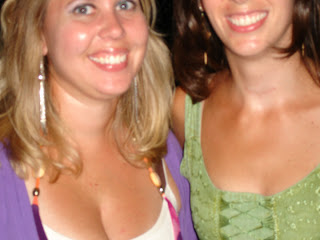 I almost got kicked out of the Belevedere when I took this picture—but they were velvet covered exercise balls! Come ON!

We were staying at Eva’s Aunt’s apartment and on the last night, we absolutely could not figure out how to open the door and had to call Eva’s cousin to come open it for us (which they did, easily.)  In case you wanted to know what defeat looks like: