I am not going to write to you next week, so, I thought I would get a few notes in now so that you can’t say I didn't consider your Tiffany withdrawal issues.

First, not funny, but definitely interesting: The Johnny Cash Project.

My boss brought back some “Keep Calm….” iPhone stickers back from Licensing show, and I took the “Keep Calm and Sing Sweet Kitty” and put it on the shattered glass of my phone so, preventing injury.   When asked if used it, I responded with, “I put it on right away… though it should be called, “Keep calm and don’t cut your face up.”

I had Zach take this picture for me the other day because I wanted to be able to share it with the world: 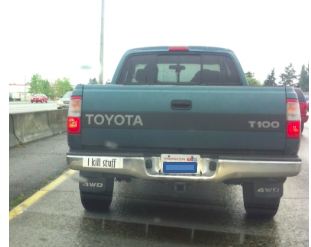 During an apparel meeting in which a Spartan was being used on shirt, a lively debate erupted, that was concluded with, “I think this might be a fashion call not a combat effectiveness call.”  You think?

Yesterday, I walked into the house to find my Uncle Bill was in for a surprise visit!  I said hello, and then immediately made him come outside to meet Stella.
Me: Isn’t she CUTE!
Uncle Bill:  Let me open the hood.
Me: Ooh! I’ve never done THAT before!
Uncle Bill: You bought a car without looking under the hood?
Me: I figured they wouldn’t sell me a car that didn’t have all of its parts, and even if I opened it, who’s to say what I was looking at.
(after checking my oil… three weeks – still good!)
Uncle Bill: How’s the engine?
Me: I don’t know.  Wanna try it out?
Uncle Bill: You got an automatic? (Voice full of disappointment.)
Me: Yup! Went for a lazy upgrade (or downgrade depending on who you ask.) But look – I think if you shift over this way, Stella pretends to be a standard.
Uncle Bill: That is the best part about this car.
Me: WOW!  I had no idea Stella could do so many tricks!  She’s so surprising!
(When we got back)
Me: Uncle Bill had Stella do things she’s never done before.
Uncle Bill: It has a tiptronic transmission.  It’s pretty cool.  It also has a “sport” button that doesn’t seem to do anything.  You should have that checked out actually. 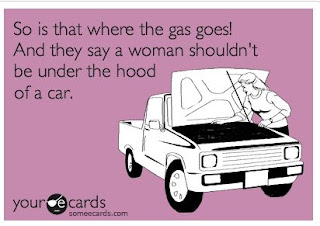 Other than that… my eyes are on the mend, I got permission to wear contacts for a couple of days next week so I can go swimming with horses, and I finally drove myself to work today for the first time all week.

Happy Father’s Day to all of the lovely Dad’s out there especially to the best dad in the world, Frita! (Frita doesn’t like when I exaggerate, that’s how you know this the truth). 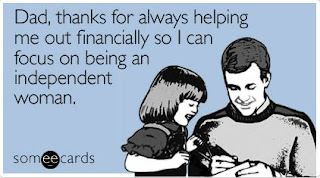 Pre-Trip Chatter:
Kathi: When are you guys flying out exactly?! Are you done packing yet? Can I travel with less than ten pairs of shoes? Will medium strength sun lotion be enough? How much alcohol will we be able to absorb a) without people noticing too much b) before our bodies stop working? Can we put our towels up at 5am to save the best spots and when people argue just say that we are Germans and that this is a cultural thing? Sooo many questions X___X
Me: Marat picks us up at 6:45 am. We get in around 5:30PM to Orlando. I am done packing with the exception of electronics that need to be charged and my passport. I am traveling with 2 pairs of sandals, water shoes and heels. I have 55 spf (face) and I think 70 (face) - but I'll look for a 15 for funsies. A) A lot - but I don't care if ppl notice. B) a lot plus ten shots. If you don't see me walking around with a bucket of coronas - send help. YES on the towels - though I think we can just bring breakfast TO the deck that we're sunbathing at then sleep until bar opens.

OOOH! And Kathi is bringing German face paint for when we watch the futbol.  Game On! 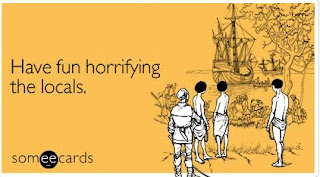 Okay – that’s all we have time for today – see you on the flip side!

Posted by skcorynaffit at 4:11 PM