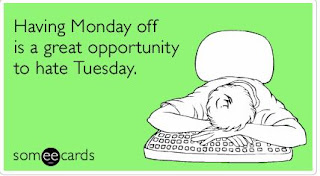 Last week we spent some collective time studying for finals.   At some point, and I don't even know what he had done to deserve this response, I started singing to Percy, "Who's Lame?  Lucas is Lame!" I didn't realize I was singing this until I heard Lucas say, "That is the worst song ever.  It's probably going to be a hit."

At work, we needed to get some images for a project I'm working on.  In order to do that, we had to play the game, and shoot near each other without actually hitting each other (which is a bit of a specialty for me.)  I pretty much ran around randomly near everyone, pressing all of the buttons on my controller.  Unfortunately, Carlos was close to me when I was pressing buttons and I accidentally assassinated him. 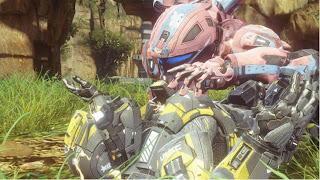 Me: Whooopsedaisy!
Carlos: SO MUCH FOR NO KILLS!!!
Me: Um… didn’t you run me over with a warthog?  Twice?
Carlos: I WAS TRYING TO PICK YOU UP BUT THEN YOU JUMPED IN FRONT OF ME LIKE A DEER! TOO FAST!
Tyler: The group was full of remorse. 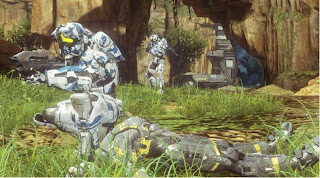 That's right.  That there Spartan is doing a victory dance on Carlos' still warm body.

Last week was particularly foggy.  I hear it was causing an atmospheric pollution problem - that's how thick this fog was.  I might have mentioned on facebook it reminded me of when the horse dies in The Never-Ending Story.  I'm what you call a regular Susie Sunshine.


Lucas was finishing up some paper mache projects one night when I started talking to Percy.
Me: You didn't know him then but he used to paint and do crafts any time he wanted to... like he just didn't care... [with his hands in the air.] You could tell his lack of caring by the direction his hands were pointing.

Ooh!  I became a "minister" of the Universal Life Church... so I can officiate Evivova's wedding in February!  So excited! 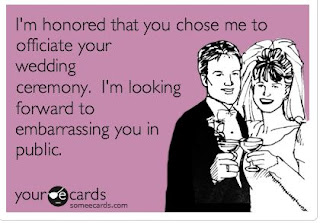 Friday, I put away the Nutcrackers that were lining the stairs because Percy loves going up and down the stairs and those Nutcrackers were no match for his exuberance. Saturday, I went to a puppy class with Pam.  We didn't bring the pups - so it was a lot of teaching us what to do.  I felt like I was on the right track already - but not sure how helpful the class will be.   Afterwards, I met the boys for lunch and then a trip to Value Village.  While perusing the merch, I found my life's work validated when I found these side by side amongst bags of random toys. 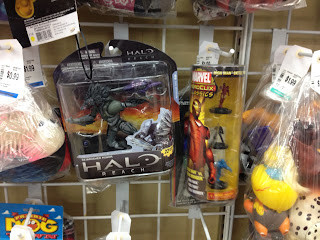 Immediately after, Lucas told me I could have just gotten this little guy instead of Percy: 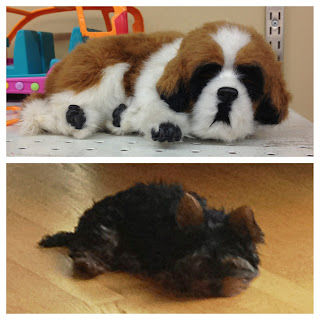 Later that evening, I met up with people to celebrate a co-workers birthday.   The bar was cool, the drinks were complicated, but I thoroughly enjoyed the big open windows that allowed me to people watch all the hipsters walking by.  Sunday, I can't remember what occupied most of the day, but it definitely included some QT with Matty.  We hunkered down at Earls in Bell Square, and our waitress had only our table to wait on.  She was pretty amusing and extremely attentive.  Plus, Matty and I were able to catch up without feeling like we had to rush out and give someone else the table.  Win/win.

Other than that, I bought some UGGS and they are like walking on PILLOWS! Warm, snuggly pillows.  I don't understand why, when I was complaining about how ugly these shoes were and asking why anyone would spend that kind of money on boots that made your feet look fat, no one answered: because these shoes feel like heavenly clouds.   I'm wearing them every day and I (obviously) don't care who knows it! 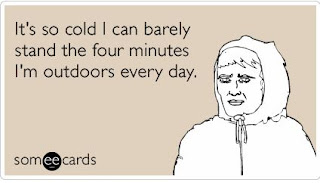 Splish Splash...Percy hate baths. But he loves redistributing all of the water in the bowl on to the floor. Actually, a piece of food fell in the bowl and he worked at getting it out. And then I thought he was just playing, but then I saw there was another crumb at the bottom of the bowl. He kept looking up at me like I was going to tell him to stop but I figured it's good to teach him how to put his head under the water. 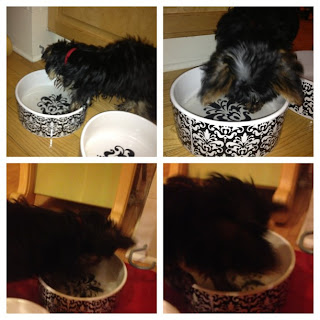 I hope I didn't miss something, but I probably did - so just assume my week was fabulous even though we all know I spent most of the day hanging out with these guys: 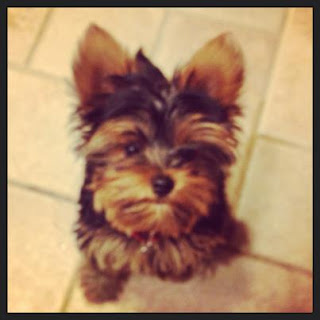 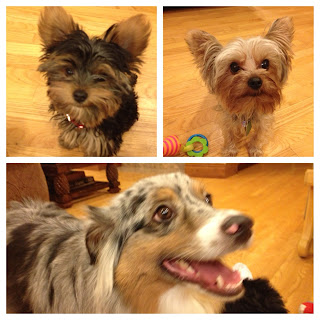 Unless you wanted to hear a rant: As I was cleaning the kitchen and unloading the dishwasher, while trying to get Lucas to focus on studying for finals, when I broke a glass. So there I am, my hand bleeding and I'm barefoot - picking up Percy, throwing him in a pen and running the other dogs downstairs and outside.  Lucas hands me a gigantic band aid, picks up the large pieces of glass and goes back to studying. I then have to bandage my hand (with a different bandage) sweep up the glass while Percy is crying. I then realize I had made coffee so it was ready to go in the morning but accidentally put it on so I have to do it again. I finish unloading and loading the dishwasher from a dinner I didn't make or have. Then Luke rolls the chair on Percy enough that he's squealing and then... I step in another shard of glass - foot bleeding I try to mop the floor again. At this point all I want to do is cry - but feel dumb because nothing really terrible is happened - but it all happened in a 15 min period. PS: Looking at the cut now, I wonder if I should have gotten stiches.  Oh well! It’s now covered in a Band-Aid I got from Christy that says, “You have a heart of a Champion” smiley face, smiley face. 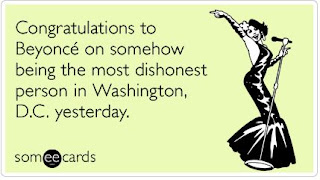 Posted by skcorynaffit at 4:50 PM