I am DETERMINED to get back on schedule, but seem to always be behind.  Last week, someone was telling me that when they come back from vacation, they delete everything from their inbox; if something was really important, the person will send a follow up email.  I'm surprised that I didn't break out in hives after hearing this story. I watched Orange is the New Black with Matty while I sewed/glued together some additions to my bridesmaid dress.  Some days we went to the park, ooh, I definitely think of those park visits included Diana, but overall, pretty run o' the mill until Friday.

On Friday, I wrote my Monday email, a week behind again, at the airport on my way to San Francisco.  Did I tell you that I discovered Ginger Gum? So much better than the pills, and no water required!  (Ever since I turned 30, I've been motion sick.  And ever since I told my cousin Mary this, I've been taking Ginger pills - which totally work, but sometimes they burn my throat - which is weird.)  I arrived to San Fran only around 2 hours late - and went immediately to meet Janette at the hotel. 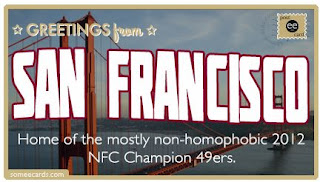 Can I tell you how much I adore this girl?  A lot.  (Although, maybe I've already told you this because a quick search of my blog says that Janette and adore have come up on numerous occasions.  The best part of the weekend was that, even though it was her wedding weekend, and there were so many people around to celebrate - I actually got to spend copious amounts of quality time with her.

When I arrived, we grabbed some lunch, did a couple of small items on her to-do list.  Her sister, Suzanne had gone shopping that day so we went over to look at the dress she bought.  This is one of my favorite things about Janette - we got there, and Suzanne had bought a purple flowery dress that looked amazing on her.  Janette's response?  You should just wear that tomorrow.  (We were all wearing different bright - but solid - colored dresses.  Suzanne's color was green.) 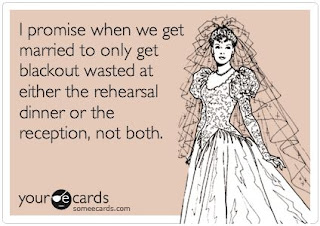 Before I arrived, Janette asked me to make sure that I make sure she left the after rehearsal dinner drinks at 10PM.  We had a lovely dinner, and cocktails and conversation were lovely, and then before anyone knew it, it was ten o'clock, and I was telling the fun loving, socialite that she had to leave her party.  I agreed to a 30 minute extension in which I walked around, warning everyone that she was about to leave and they should hurry up and say hi to her before she did.  We got back by 11, not too shabby if you ask me.   Getting to stay with Janette was an amazing gift.  It was like having a sleepover, only we were at the Marriott - but her parents were still in the room next door.

Me: So, tomorrow, should I just being my suitcase to the front desk or bring it to the ceremony so I'll have it when I go back to your apartment?
Janette: Or you could just stay here on the couch.
Me: Yeah, it's your wedding night Janette.
Janette: I'm sure lots of people will be crashing here.
Me: I'm positive that they won't be.

I didn't see Janette turn into Bridezilla, but if ever she was going to, it would have happened when we went down for breakfast and the guy guarding the door tried to tell her they already had their quota of her family that day.  I would have stomped my foot and whined "But I'm the BRIDE."  Fortunately, we reversed his position immediately and let us in.

After breakfast, folks started showing up to do our hair and makeup - so naturally that was when Janette and I decided that we should take turns taking showers.  The jams were phenomenal - and not because on several occasions could be heard singing every word of a Salt n Pepa / TLC / Destiny's Child song that I hadn't heard in 15 years.  I don't think anyone reading this will be surprised to hear this information. 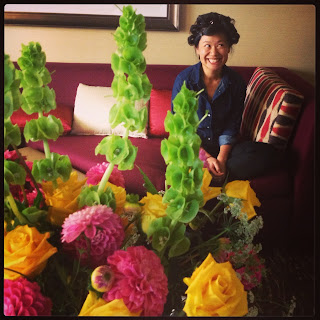 Janette: How was Rachel's wedding?
Me: Great - and I NAILED the reading.
Janette: Speaking of which, can you read something at my wedding? 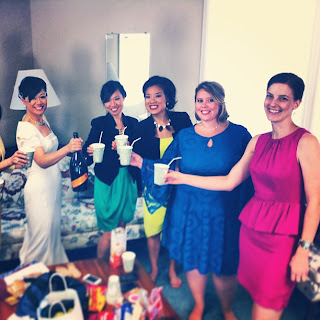 Bridesmaid: How nervous are you?
Janette: I'm feeling good.
Bridesmaid: I don't know about you, but when I'm nervous, I pee a little.  Not a lot, just two drips.

Ten minutes before the wedding.
Bridesmaid: How you feeling now?
Janette: Two drips. 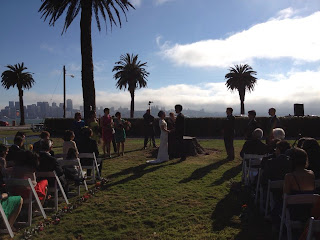 The ceremony was beautiful, and windy, and funny and sweet and totally perfect.   Afterwards, at the reception, the entire bridal party walked in with Aviators, then groomsmen in fro wigs, all dancing in to stayin' alive to form a true Soul Train.  It was epic. 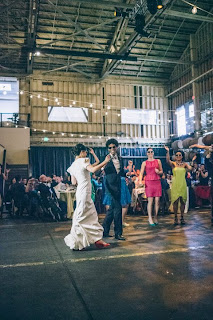 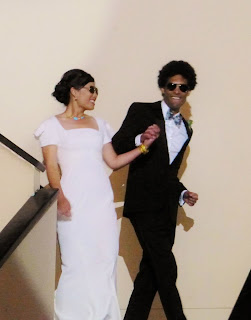 Janette and Neville, instead of asking people to toast them, asked to be roasted and roasted they were.   Here are some of my favorite stories.

Roommate:  Congratulations, Neville, on reaching your goal weight of 115.  It must have been a real challenge to gain those last 5 pounds.

Neville's Dad told us about taking Neville to the opera at age 4.  He did really well through most of the performance until the very end when a dead body is dragged across the stage.  This is when our boy Neville started laughing hysterically as his not-so-proud papa sunk as far down in his seat as possible.  It was the last time Neville was invited to the opera with his father.

College Roommates:  We went to school with Janette at the greatest school in Cambridge the Massachusetts Institute of Technology.  All the guys from the other school in Cambridge, always dreamed of getting with an MIT girl.  Well, today, one Harvard man finally got his dream.  Congrats Neville!

You know when you go to college and you're only allowed to bring a couple of choice items?  Well I was curious to see what was essential to my future friends.  That's when I saw Janette unpack her chemistry set and her laser tag guns.  For those of you who don't know, laser tag is one step lower in the cool factor than dungeons and dragons.  [Tiffany's note:  I LOVED THAT LASER TAG SET!!]

Janette also really got into Yoga in college.  So much so that in one class she fell asleep.  We were all worried that she wouldn't wake up before the class ended, but just before the end, she farted herself awake.

And that's how you roast a bride at a wedding.  After the roasts, Janette and Neville stood up to thank people.

Neville: I have some logistical information for you.   Next, dessert will be served [Tiffany's note: no cake, just donuts.] Followed by dancing and there is a photo booth area over in the corner.  There will be two shuttles one is at 9:30 [looking at watch] which is in 5 minutes so you better leave now.  Or else there will be another one at 11. 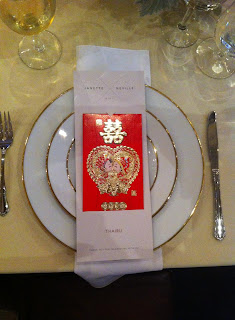 I loved this whole concept of keeping guests to the end by locating the wedding on an island and controlling the transportation on and off of that island.  LOVED it.  We all went out to the after party at a bar that told us to congregate upstairs, with no bartender and we were not allowed to put the lights on.  It was very intimate.  I started to get a little concerned that I forgot to get the keys to their apartment from Neville and Janette.  When they arrived, Janette handed me the keys and said, you have the address right?  Just sleep wherever.  Now, I have never been to this new apartment, so imagine how thrilled I was when Neville said described what the outside of their home looked like, and described the inside so that I could find where I needed to in the dark, and had put out new sheets & towels for me.   And this, is how I ended up waking up in the newlyweds’ bed the night of their wedding.  (They were in the hotel across town of course.)

On Sunday, I woke up after 4 hours of sleep, and immediately texted Erika telling her my whereabouts and status.  We coordinated and before I knew it, was taking my suitcase on the BART to visit Erika Jane.  That was when I broke the wheel off of my ten year old target suitcase and had to purchase a new one.  I got to enjoy and AMAZING breakfast with an amazing girl.  It was all over far too quickly, and I was headed back to the Mission to charge my phone and get a lift to the airport from Jan-e-tte. 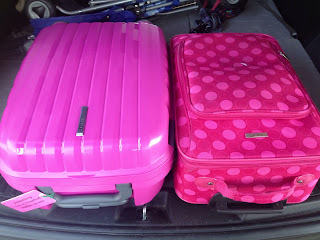 Posted by skcorynaffit at 5:59 PM