I'm My Own Bloom Map 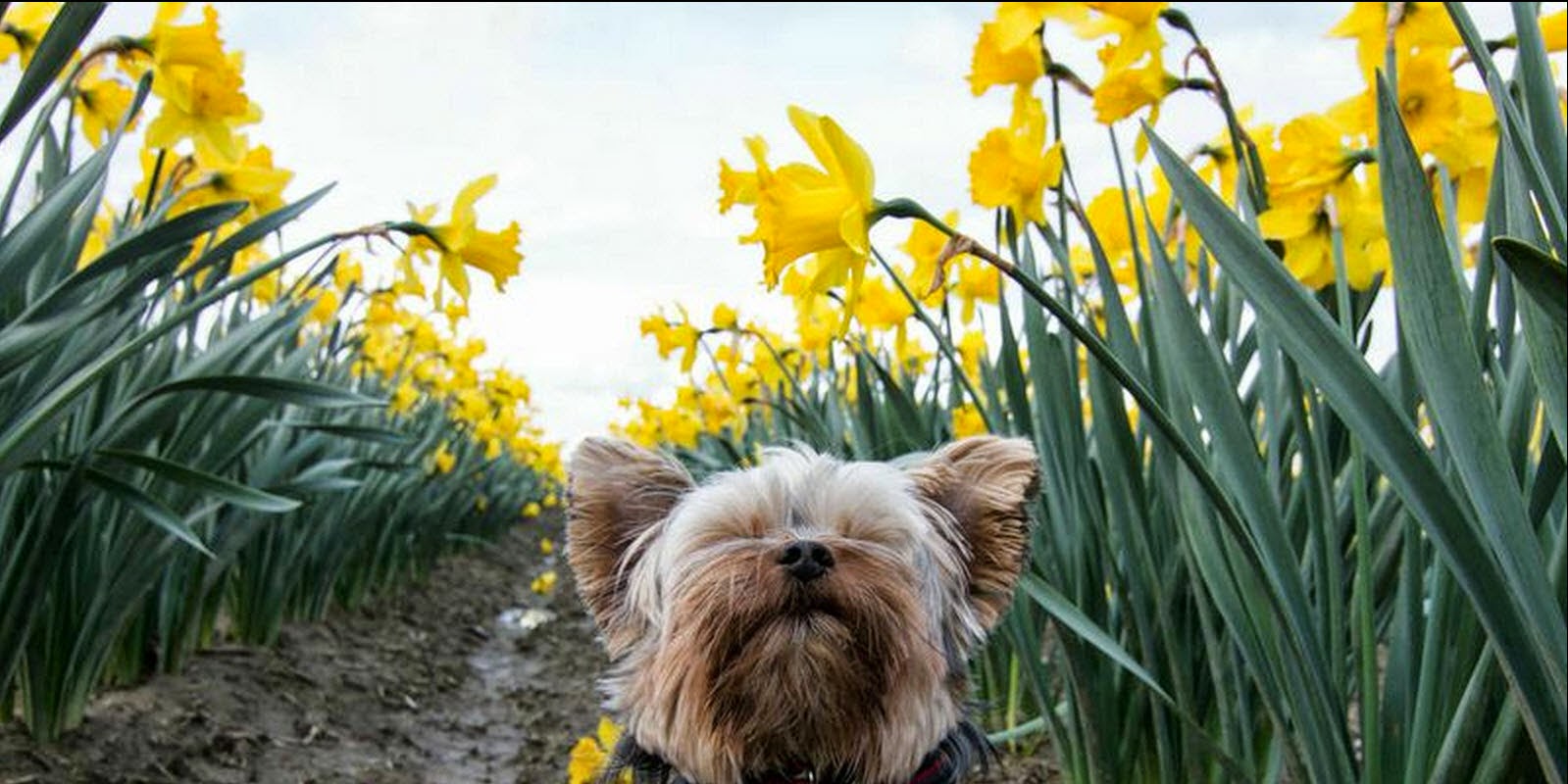 I called Dawne on my way home from work on Monday and interrupted her day at Disney.  Of course! Where else would she be on a Monday evening.  :)  She was concerned that Diana hadn't picked up the phone earlier and asked if I knew how she was doing.  Seeing as I had spent the weekend vegging out with Zach for the most part and ignoring all real responsibilities, I had no idea what was going on with her.  I fixed that by picking up some ice creaming and dropping in unexpectedly - what everyone loves!

I'm glad I barged in though, because that meant that I found out Diana wanted to join us for the Skagit Valley Tulip Festival with us the next day.  Tuesday, I picked Diana, Percy, Kelly and some snacks up for our trip to Mt. Vernon.  As we were pulling off the highway...

Diana: Did you get a map or should we stop and get one?
Kelly: No.
Diana: No?
Kelly: I'm my own bloom map

Kelly: Actually, I could use a bathroom.
Diana: There's a bathroom at the visitor's center... with the maps! 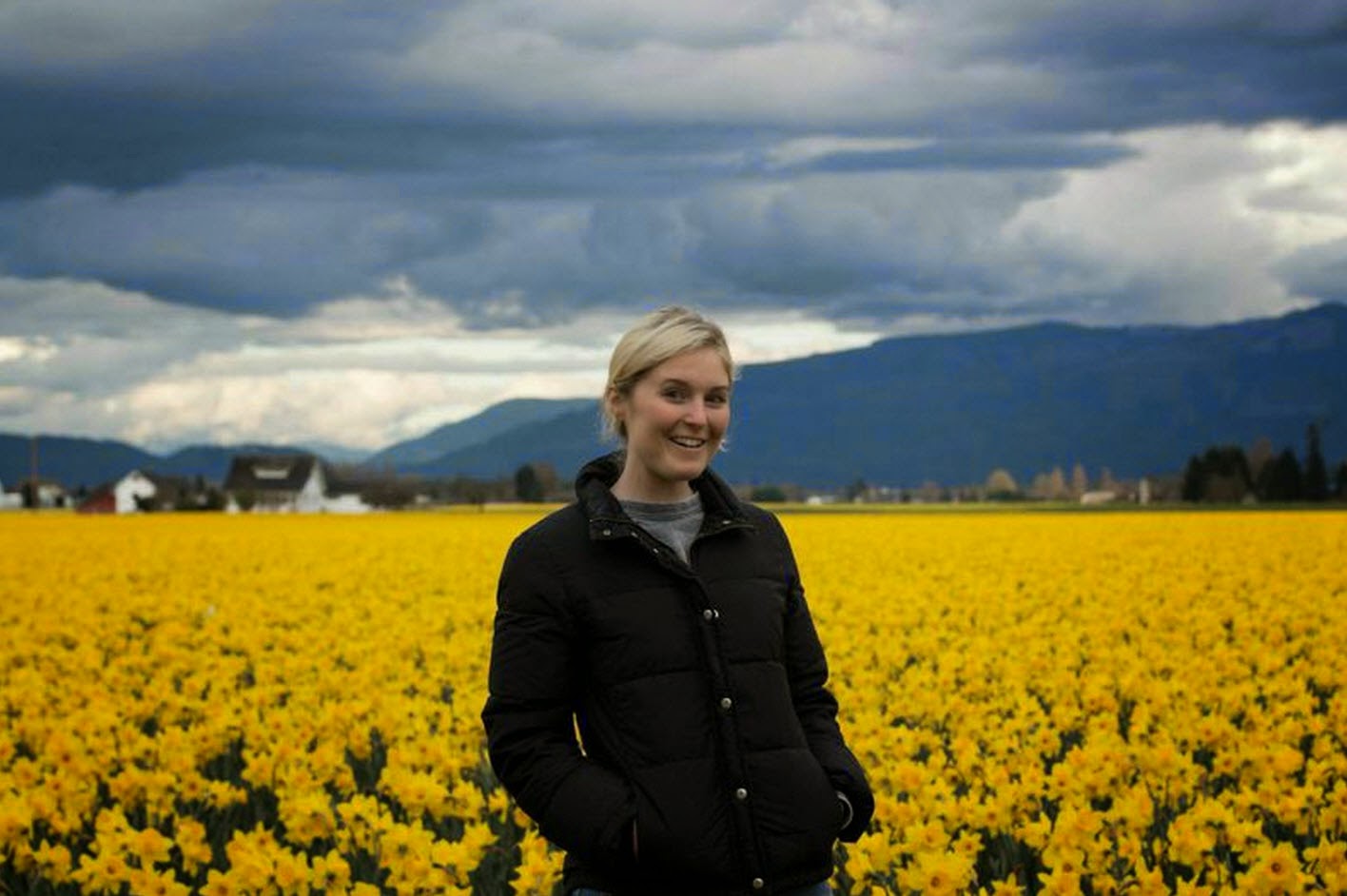 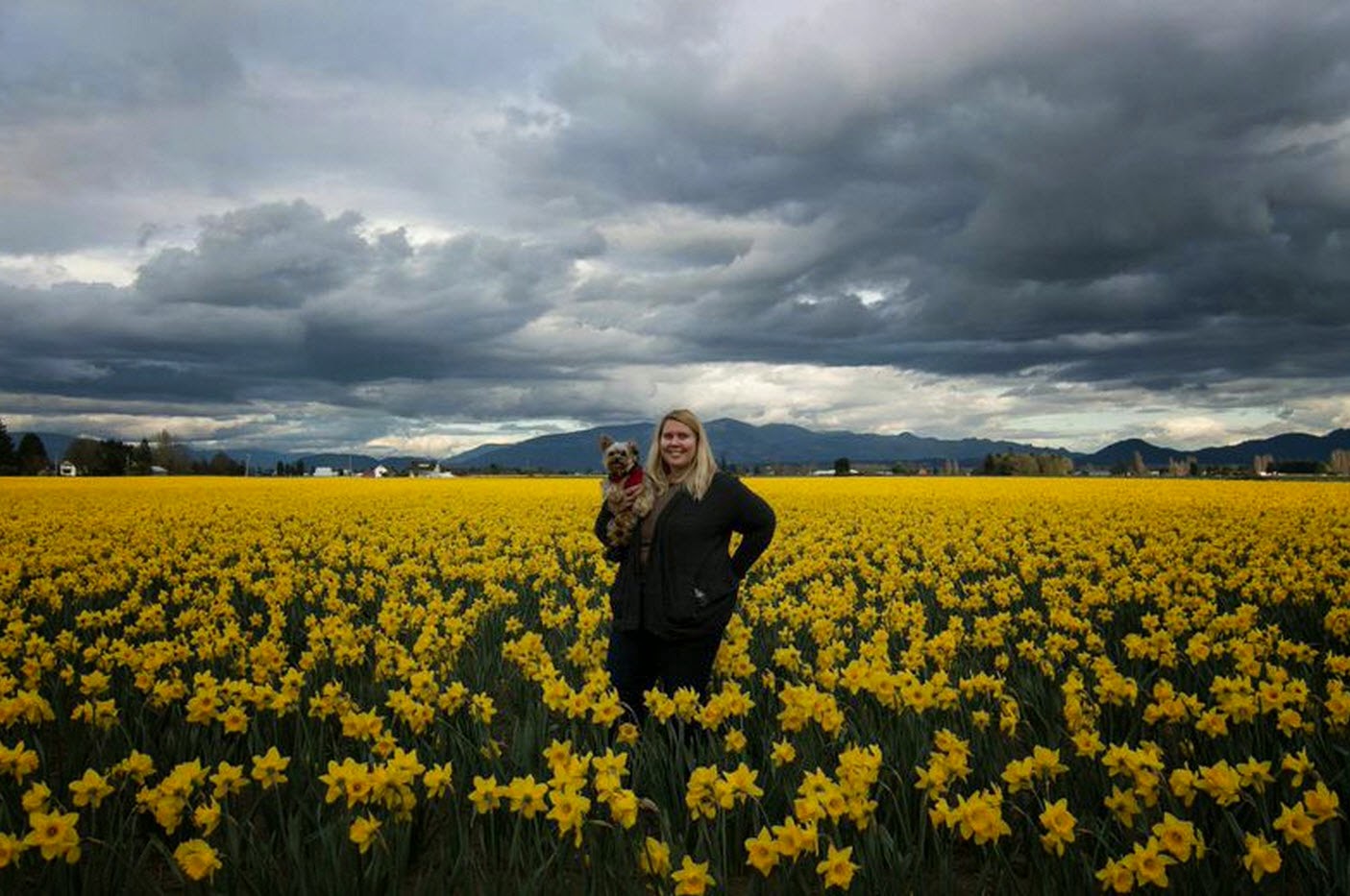 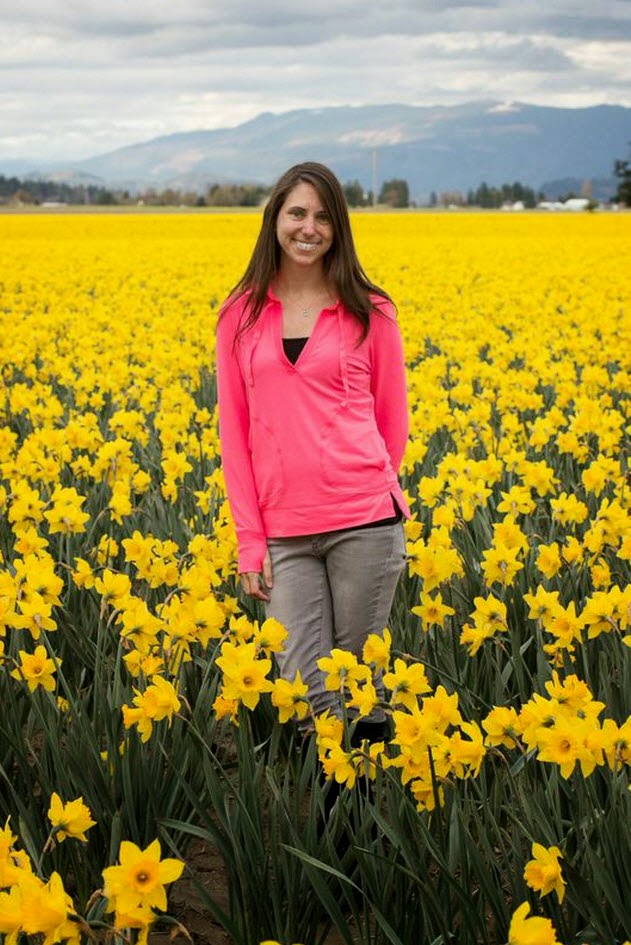 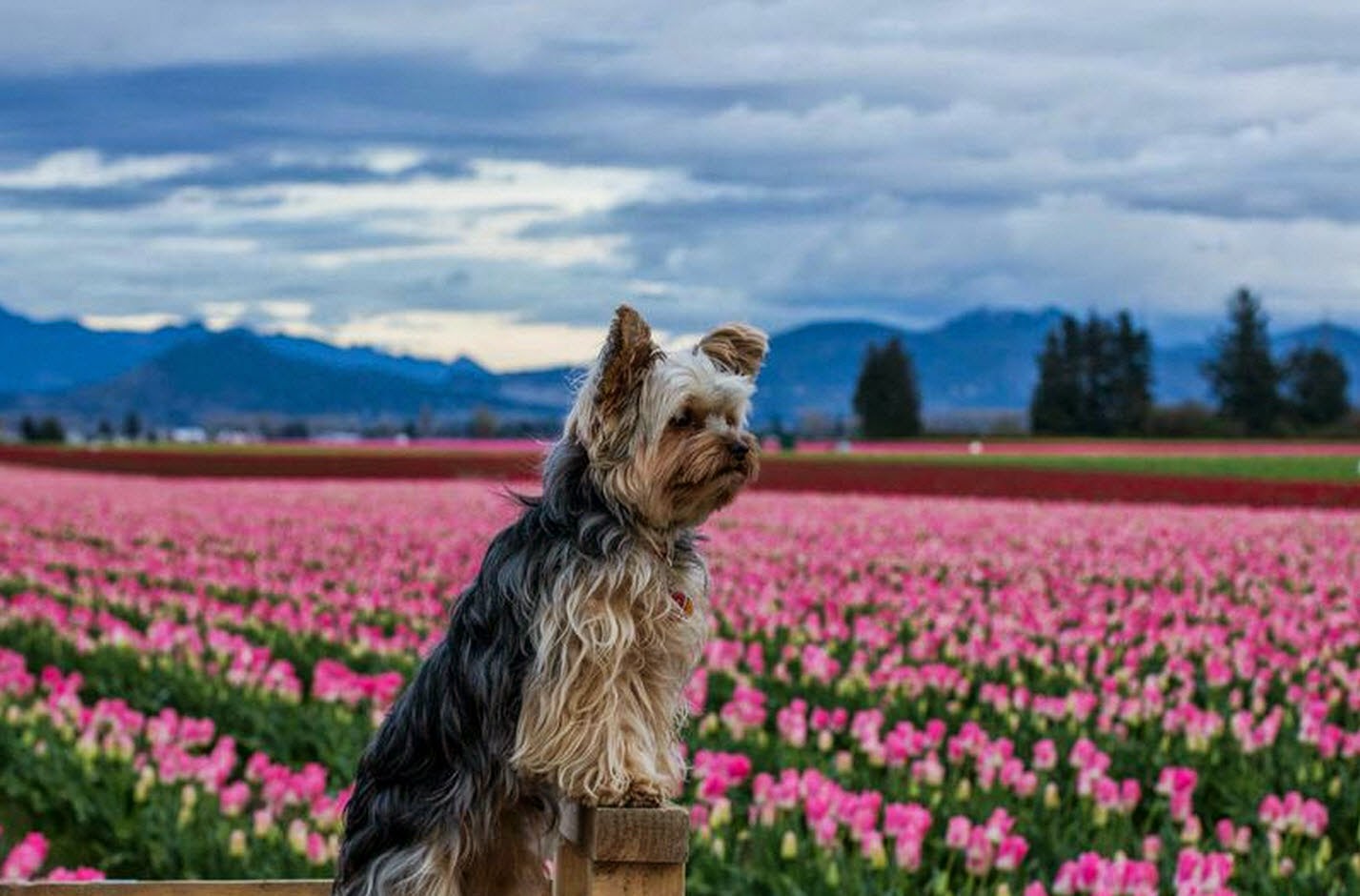 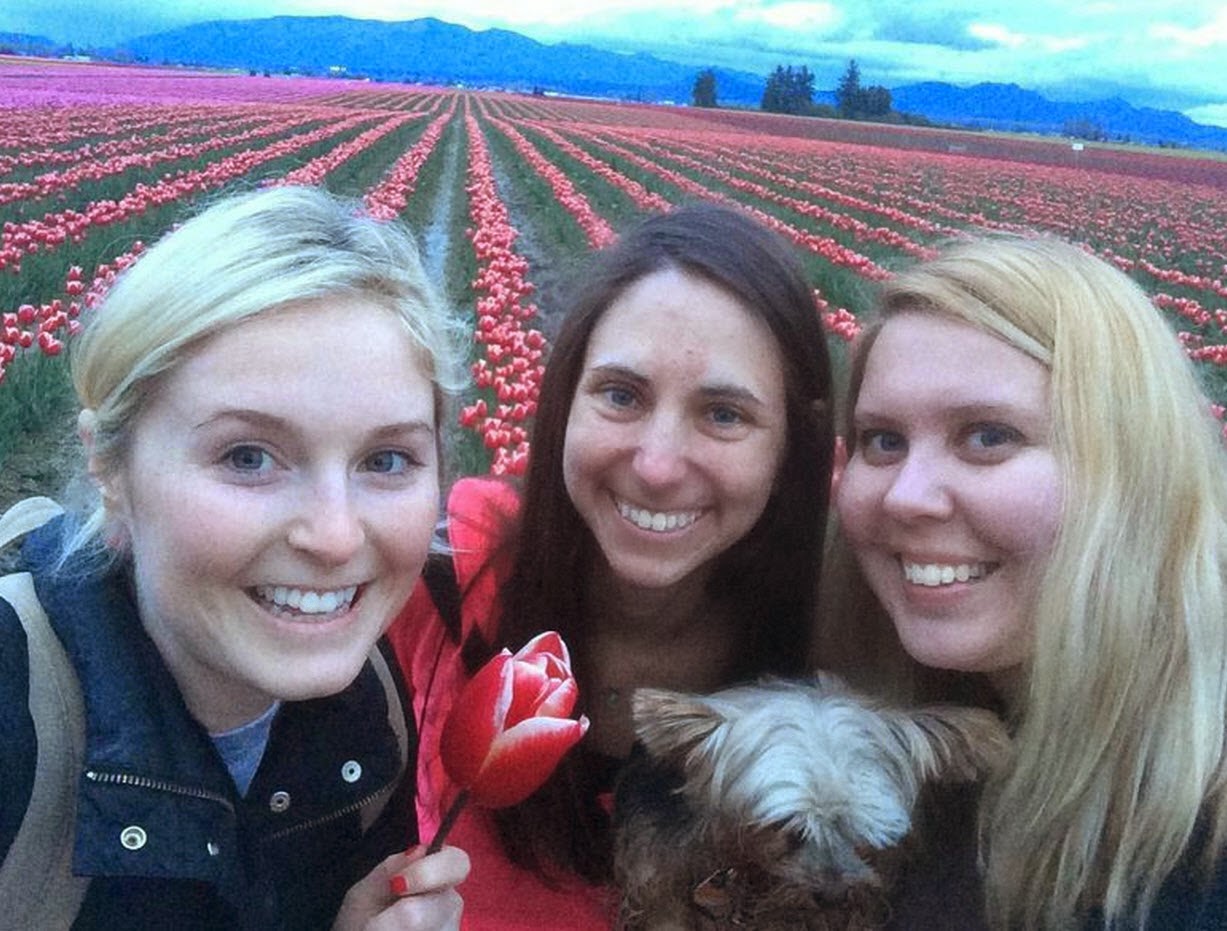 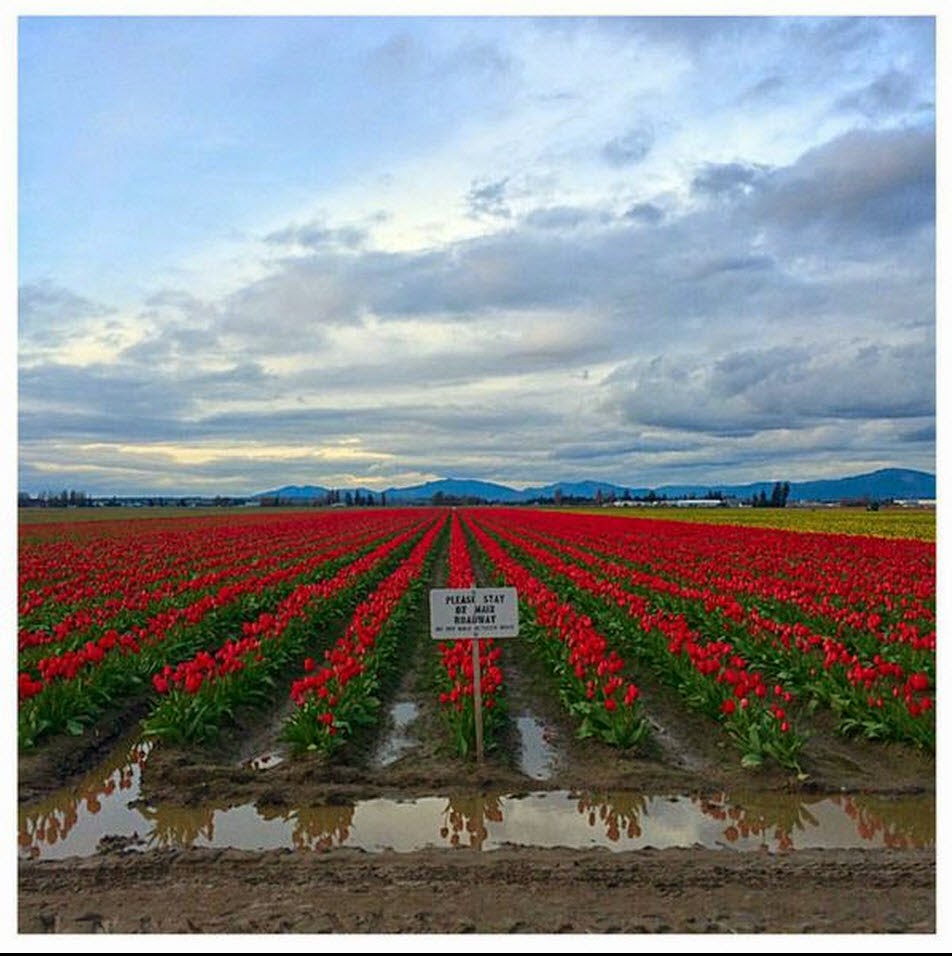 I don't know what they put these crates all around for, but I can only imagine it was as a prop for Percy.  Diana had the swell idea to wear bright colors, meanwhile Kelly was all, "Grey or Black?"  I also brought treats and toys for Percy.   I brought one toy that was mediocre on Percy's list because I thought it would get his attention without causing too much excitement.  Neither the toy nor the treats really worked.  Finally, brought out the big guns, his duck.  He went gonzo.  I gave Kelly the duck to hold onto and when we got out at the next field (did I mention that none of the field allow dogs?) and Percy is whimpering because he knows that she has it.  That's when she started squeaking the duck whilst 30 feet ahead of me causing Percy to bark.  I countered by letting go over Percy all together and let Kelly try to take pictures with Percy jumping all over her.  YW.

On Wednesday, Diana and I found out that Jimmy John's will deliver right to the inside of the cancer center of the hospital.  How convenient - and less upsetting to those around us than say... having Indian food delivered.  I also learned that despite how many people go through chemo treatment, and how ever many questions one might ask, there are always new things that you find out.  For example, Diana learned that if she eats candy and covers her nose with perfumed fabric, the gross effects of the medicine being injected at the beginning and end of treatment is mitigated.  Every time she figures something out, my first reaction is "why didn't anyone tell you this before!?" but then I force myself to get some perspective and I'm just happy that she figured it out.

On feel like maybe Friday I spent trying to catch up on these updates and then ended up getting distracted instead.  Weird.  Saturday, Zach and I headed over to Dr. Rach & Ander's for brunch.  Anders made some kind of quiche/casserole thing that was DE-LISH (and made me feel like maybe we didn't need croissants AND top pot donuts before that.) Lauren and Sheryl joined us with their adorable baby.  They were talking about looking for a new part time nanny, and Anders and Rach said they should also see if whoever they found would be up for also watching their baby.   This is when Zach started laughing.

Lauren: What?
Zach:  I'm just imagining you being very shady when you're describing what you need. "Right so there might be a second baby.  It's not ours.  We're not sure.  Don't ask questions.  I mean who knows if we'll even pull this acquisition off."

And, I took a video of Henley intensely staring at Zach holding Percy.  Zach accentuated the situation by moving around so you could see her little head moving back and forth.

Then we were talking about TV, and one show (Super tripper? That can't be right...) was something that some of us were not familiar with.

Anders: [I watch it] Sometimes. It's on too late
Me: So now you're too old?
Anders: I only watch Columbo and Mattock.
Dr. Rach: And Murder She Wrote.

After brunch, we went to Archie McPhees to get my nieces birthday presents.

Zach: Tiffany! Who does this remind you of?
Me (laughing): I don't know!
Zach: Come on!
Rach: We know someone that this would remind us of?
Zach: It's SO obvious!!
(Well it wasn’t to us… J ) 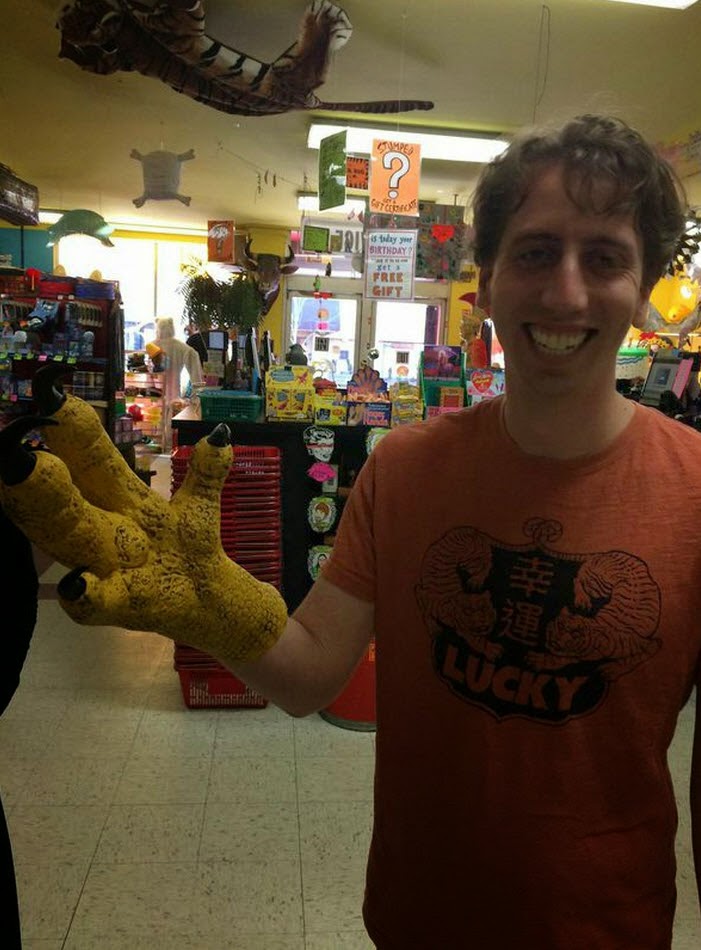 Anders (on the answering machine in stock): Oh! I need one of those.  I'll connect it to my iPhone. 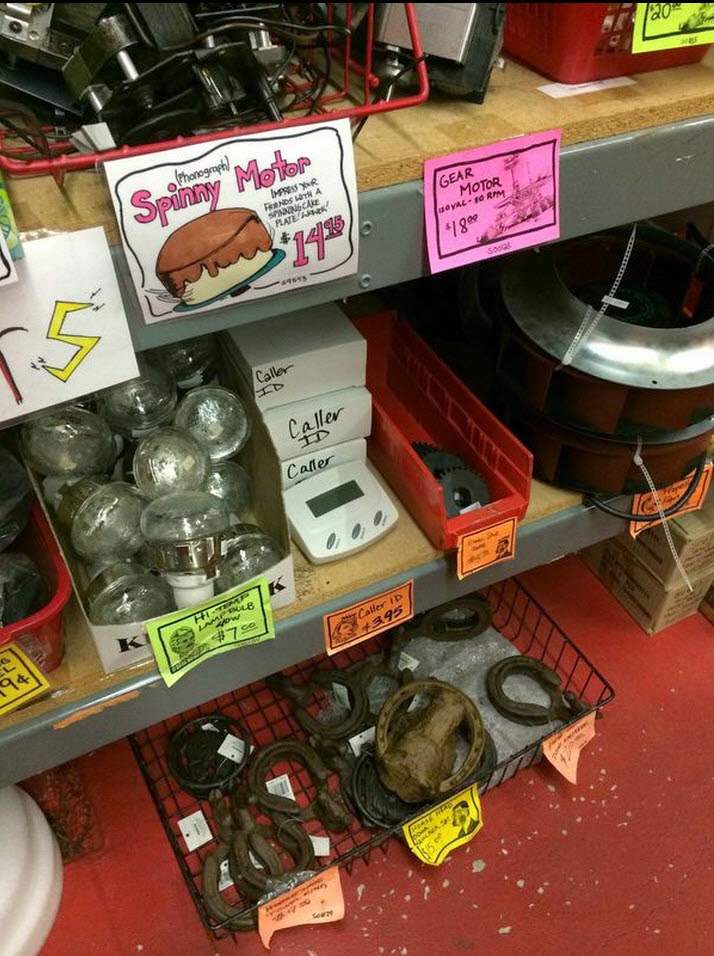 After Archies, we walked around Greenlake where I regularly had to remind Percy that it's okay for people to run, even though he's never seen me run.   We ended up coming home from the jaunt and taking a quick nap, because watching people run is exhausting.

Later that evening, Kelly, Matty, Hannah, Dr. Rach and I headed over to the Bemis Building for Mary's art show.  This building is wild, man.  It's a bunch of artist's lofts that people both work and live in.  When they have a show, like on Saturday, people display their work on the walls (like Mary did) but also open their homes to people to look at their art on their own walls.  Pretty special, right?   I didn't take pictures of Mary's pictures, b/c that's a little weird, but I did take a picture of Mary and Mukul walking past her photography. 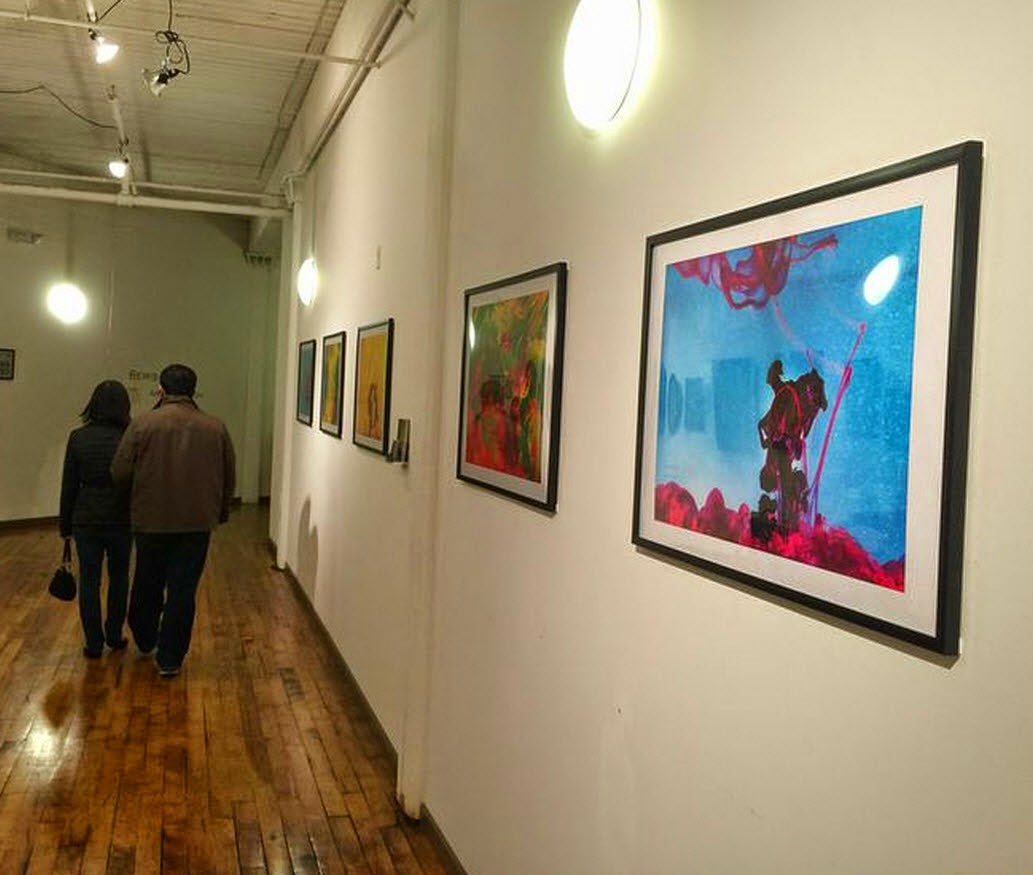 We stopped by one loft, and there was some Monkey Bowl punch (can someone from college please email me at let me know what we used to call this hodge podge beverage at Penn State? Thanks!) A gentleman offered us beverages, which Dr. Rach declined.

Then we wandered into another loft where photography was happening, and the only real quote I have here is, "Look at the light, don't go to the light." 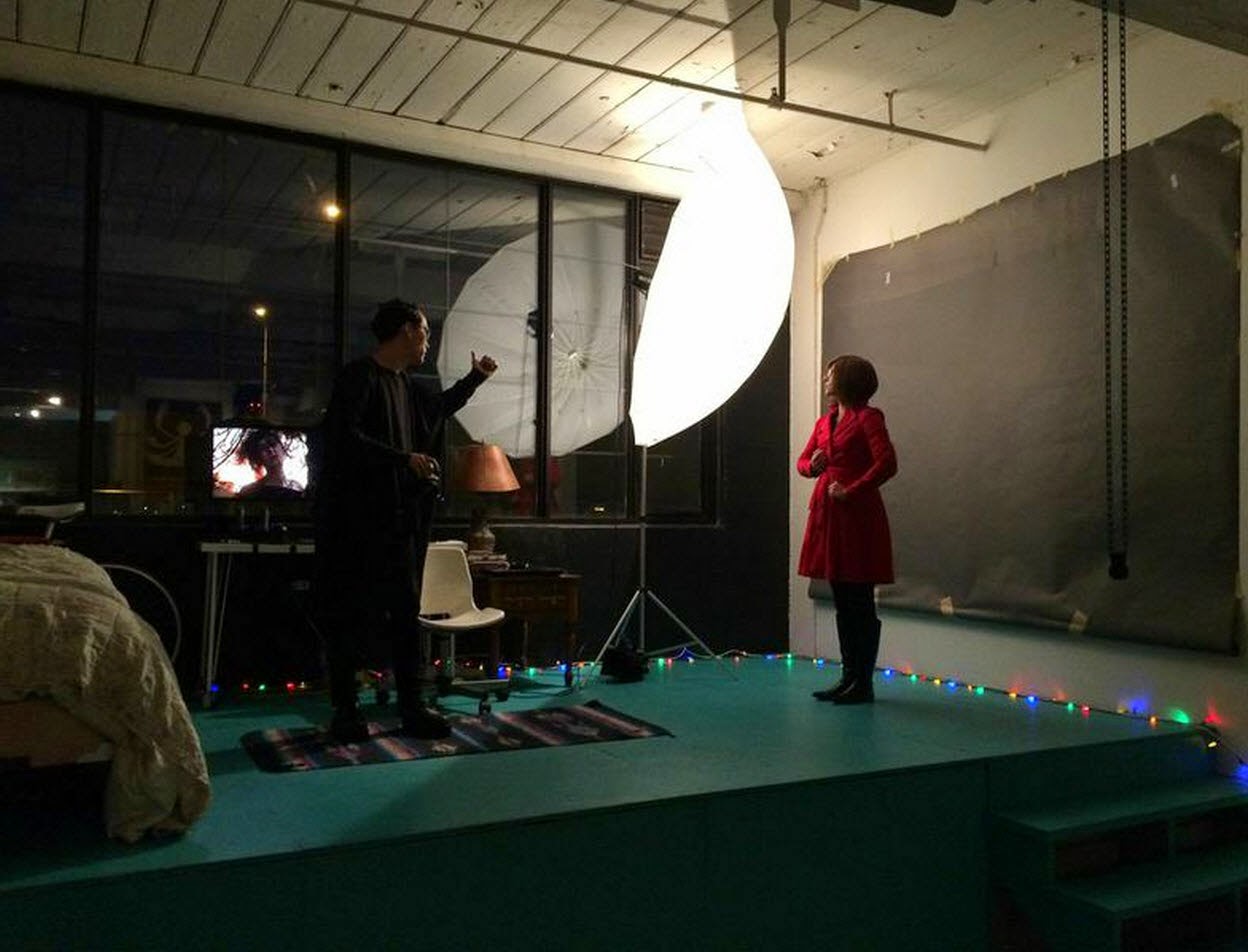 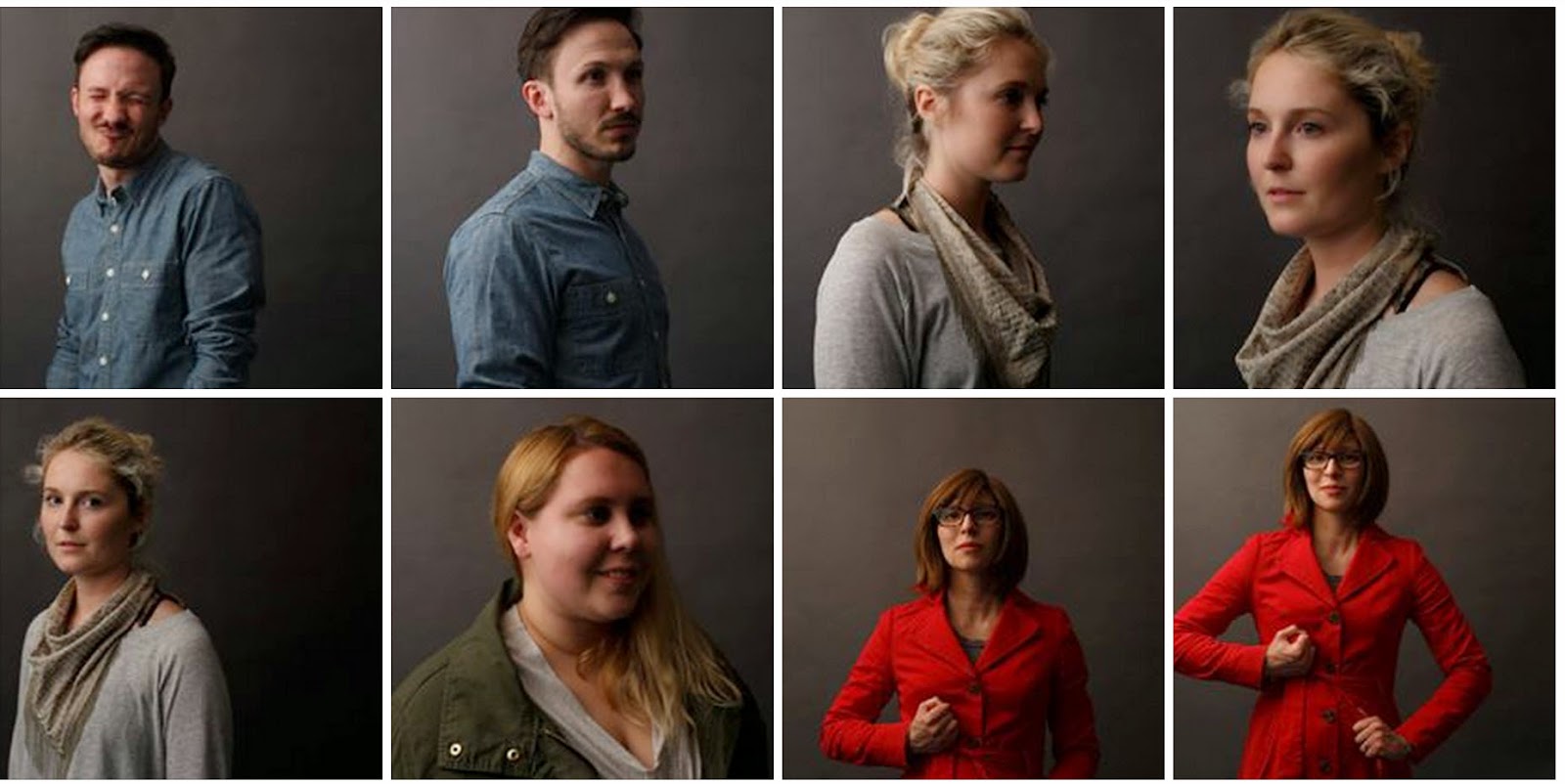 The following morning, I received a call from my brother.  Sean said, "I need you to apply for your birthday present.  I promise it isn't for an army T-shirt or a mortgage."   The rest of Sunday was filled with a walk at Marymoor, followed by Tristan making us lunch.  While he was expressing his culinary skills, we also played some board games.  After a big bowl of pasta, Kelly made the brilliant suggestion that we move ourselves over to the coach to lay down.  She legitimately took a nap, and Zach and I watched more of "Turn" and Tristan hung out with Kelly's dog Piper.

Tristan: I just got a mouth full of tongue and not the pleasant kind.

Posted by skcorynaffit at 1:47 PM