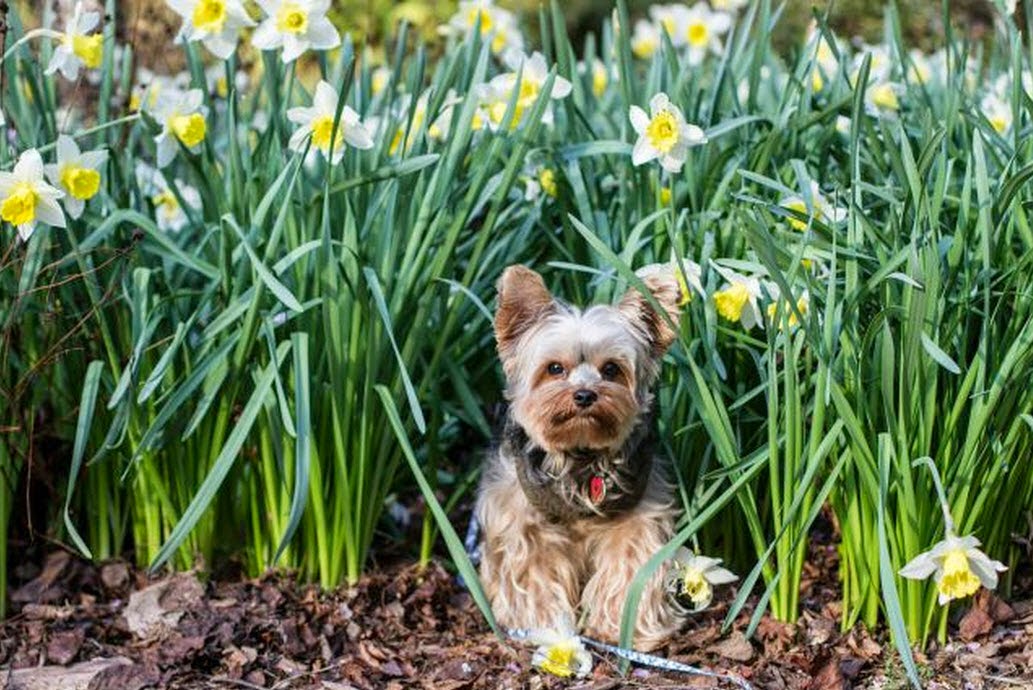 Monday night Nater and I enjoyed some fine corned beef made by me, in my brand spanking new slow cooker.   And then I spent a couple of hours baking green coffee cake and green dessert (both concoctions were new, and both were amazing – but I’m afraid to tell you what they are and then have Martha Stewart or Betty Crocker swipe my great ideas like the whole “Brookie” incident. 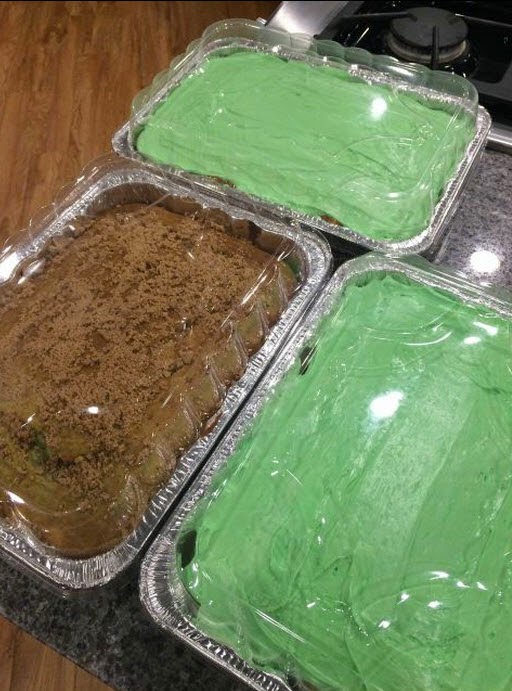 Tuesday night I made a call out to my local friends to see if anyone would brave the wilds (Wildes?”) of an Irish bar in Redmond with my “crew” – AKA Nater, Zach, Tristan, Becky and Kelly.  Zach mocked my Irish heritage on facebook earlier in the day, so I made him do an Irish Car Bomb, Naturally. 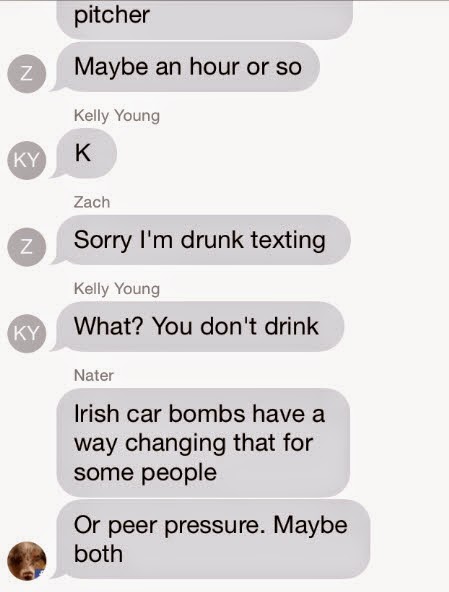 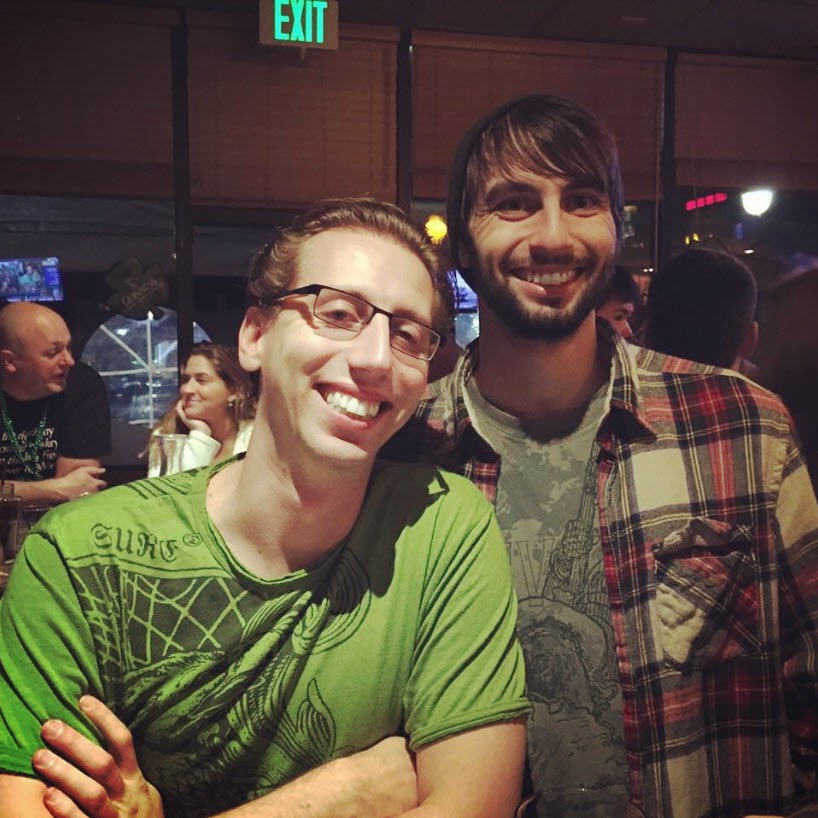 Becky was very festive with her contribution of Green Peeps (which might have actually been her dinner?) 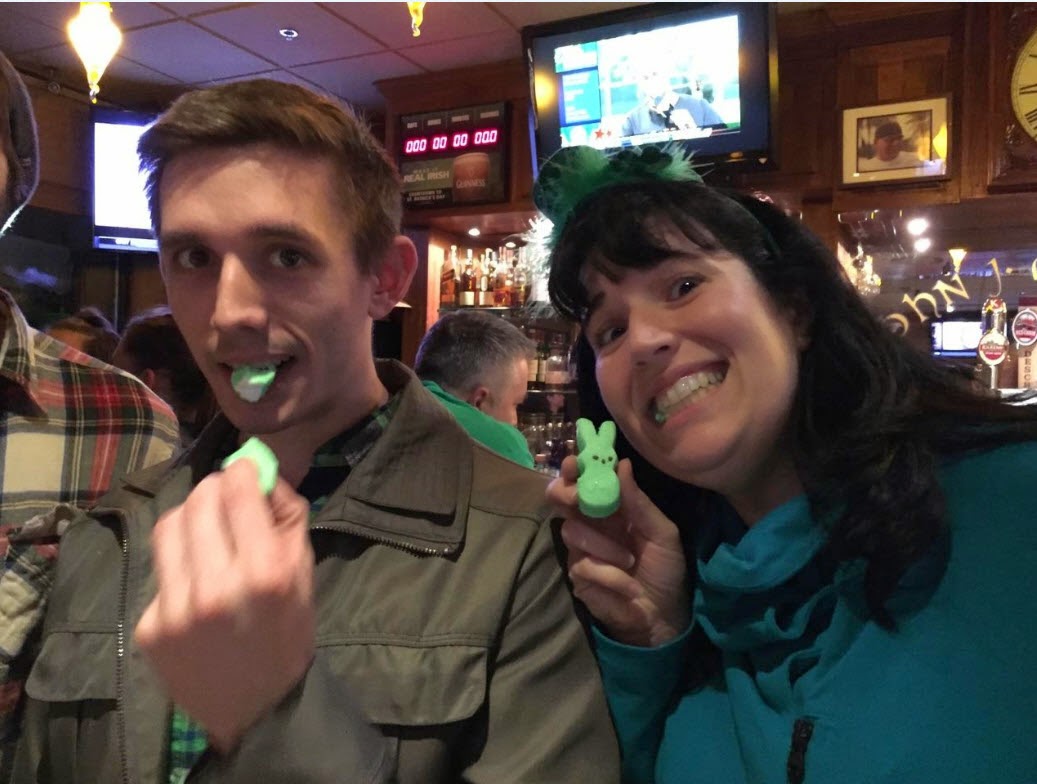 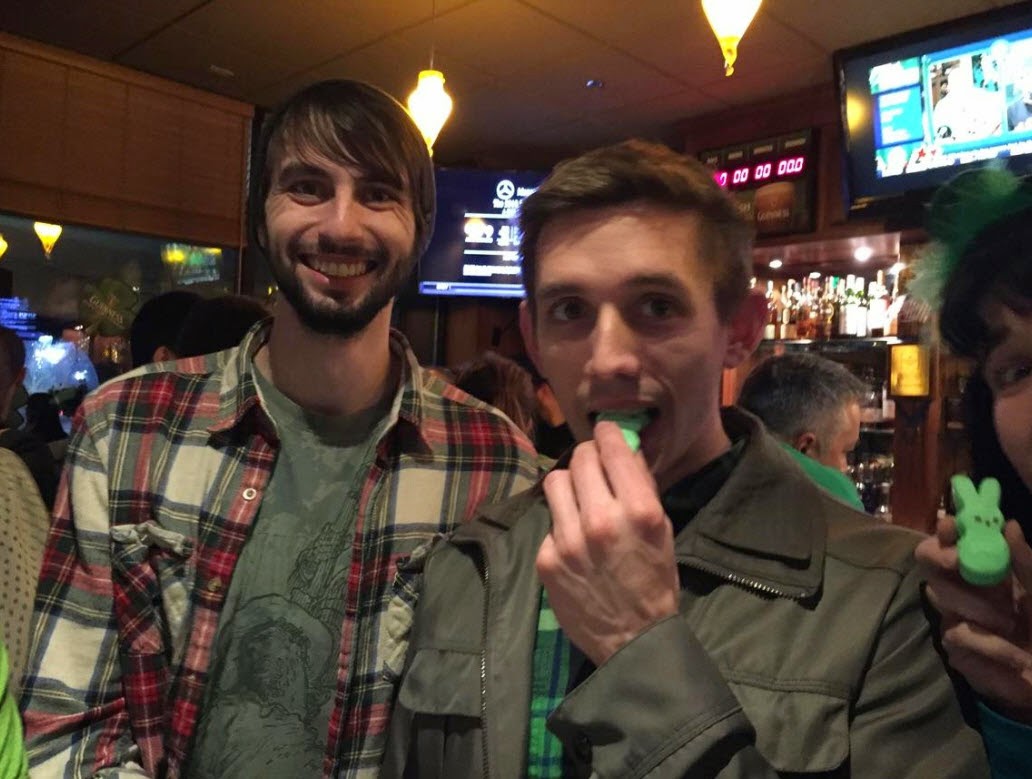 Becky: It must be nice to have such a great metabolism.
Tristan: No, I just work out a lot.

Tristan: You know, when I went to visit tigers, the tiger handler was missing an arm.
Nater: How does a stork deliver a tiger baby? You think that would get eaten.

Becky: It’s like telling someone that I had a pet raccoon, cat and pig and then have them guess which one isn’t true.
Tristan: The Raccoon right?
Becky: No I gave you three truths.
Me: Haha Nater, can you text me: I just gave you three truths a cat a raccoon and a pig.
Becky: That’s not what I said, but I like hearing the way to tell it anyway.

Unfortunately, I forgot my phone for this outing so I asked ppl to text me when someone said something funny and now I have no idea what they mean.

We were talking about greetings, hugs and touching people’s backs and the difference between an innocent touch and a WHOA buddy.  I don’t remember who said this but it’s funny, so I’ll assume Nater.
Nater: I just stick to touching bathing suit areas because I like to touch people where they have the most clothing.

Zach: We should make a TV show where the cities are made of cards.
Nater: And the whole premise is Toddlers crushing those cities like Godzilla.

Trisan: There are 9 kids in my family.
Me: Whoa! Did they all live in the trailer!?
Tristan: No.

Okay so this is when he told us the complicated tale of his family tree, around 5 times until I got it straight.  And I couldn’t only get it straight by using me hands to remember which we’re his mom’s kids and which were his dad’s kids using the thumbs on each hand for Tristan and his brother who shared the same mom and dad.   I’ll have to show it to you some time because if I took picture it would just look like I only know how to count to 9.

On Wednesday, we (Cassidy, Nater, Zach, Kelly and I) met at Moxie’s to playtest Zach’s game.   The cards are looking pretty awesome, and I had fun – though I’m not sure Zach loved our “help” but it’s always nice playing with friends.   Thursday was my third evening out on a school night.  Cray Cray.  I met up for happy hour in Seattle with Alicia, Greg, Rollie, Kelly, Maggie, Hannah and Shana.  I was a little late because of traffic.

Shana: This place is Percy friendly.
Me: Really?! Wait, how did you know I had him with me?
I know – dumb question.

Shana: I saw the most hilarious response to someone dying on facebook, all thanks to autocorrect and now I want to use it all the time. “Rene, Osprey for your loss.”

20 minutes later
Alicia: My dog sitter is leaving, so I have to find a new one.
Kelly: Rene, Osprey for your loss.

Alicia went to Mexico with Greg, and Shana got her this shirt: 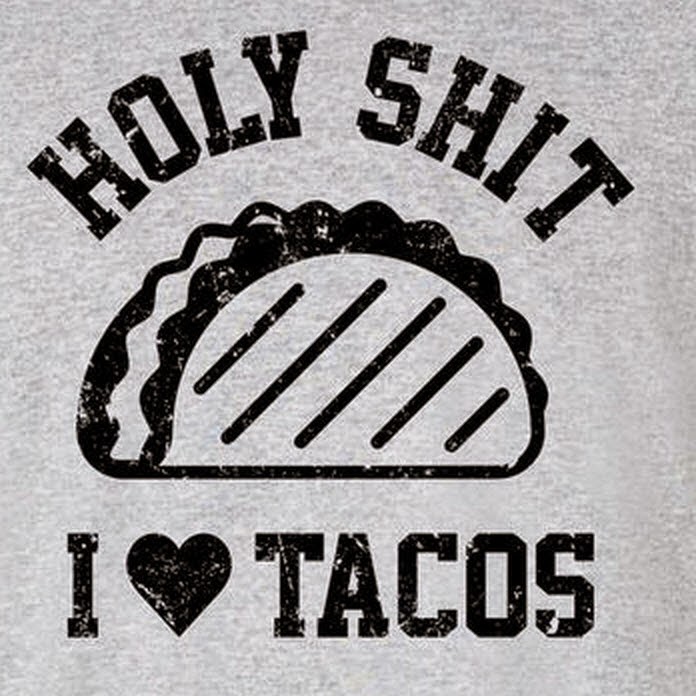 Which is appropriate because Alicia had some unfortunate digestive issues that required a stool sample to be taken to the doctor.
Shana: That is some big time boyfriend duty.
Kelly: Some boyfriends will hold a purse…

Rollie (upon his return from the restroom): There are orange slices in the urinal! My mother always told me to not waste food… so I ate it.

After that party died down, Kelly, Maggie, Hannah and I headed over to Shorty’s so that Kelly could get some photography on.  Percy wasn’t opposed to this concept. 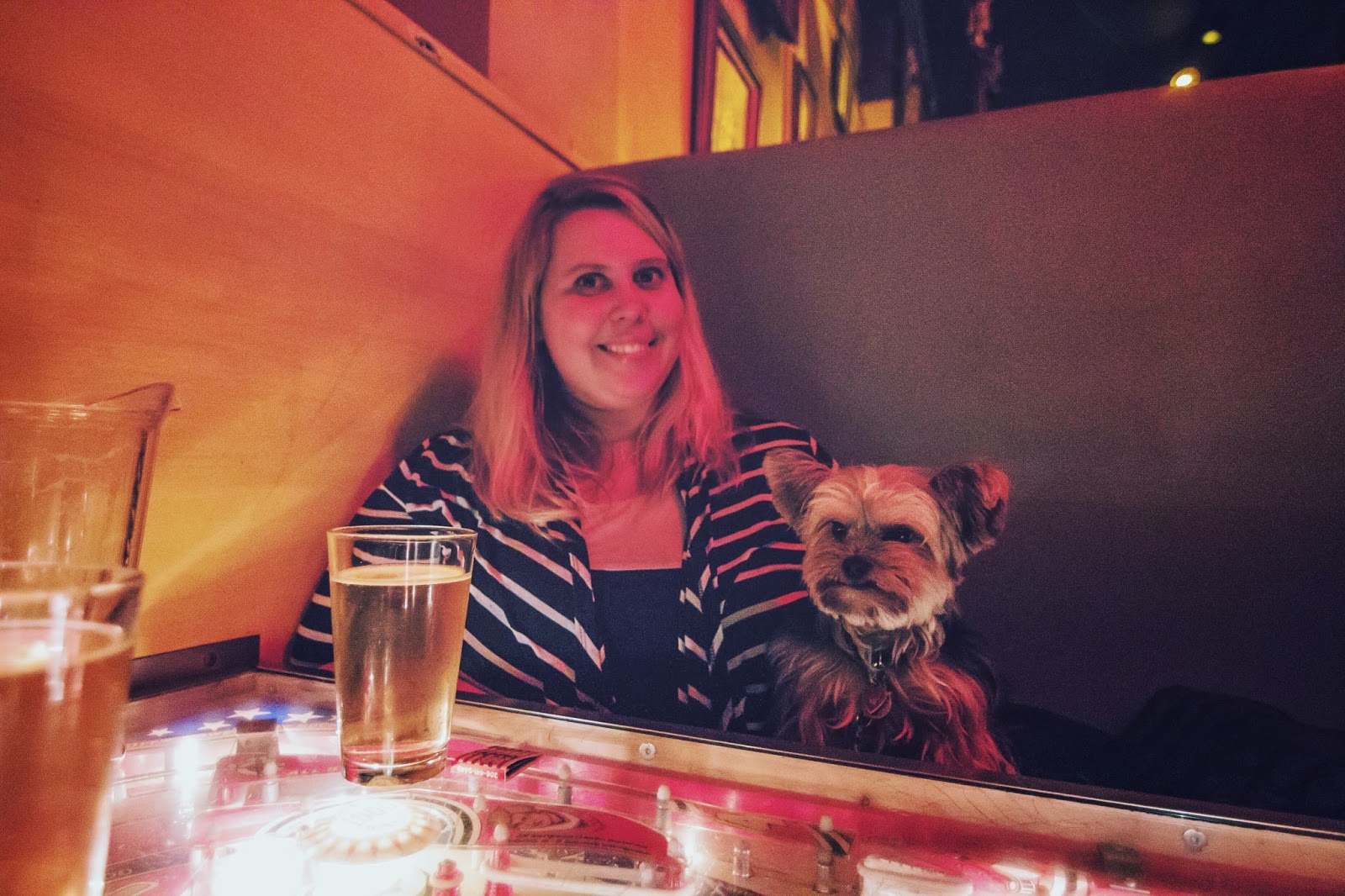 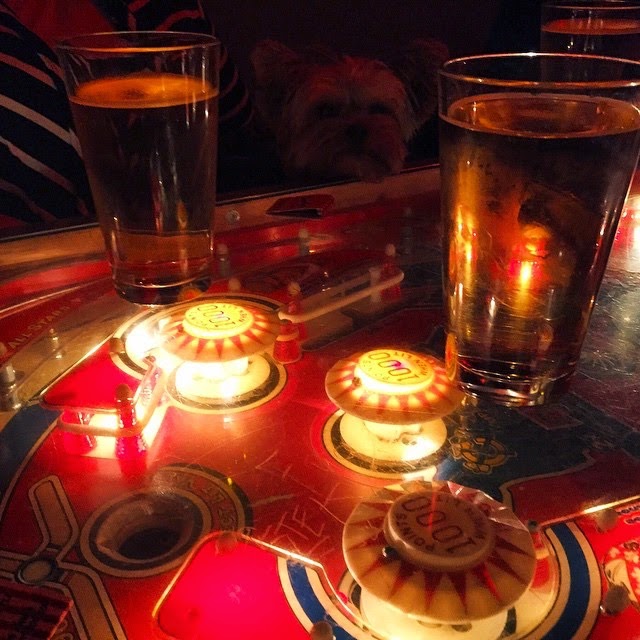 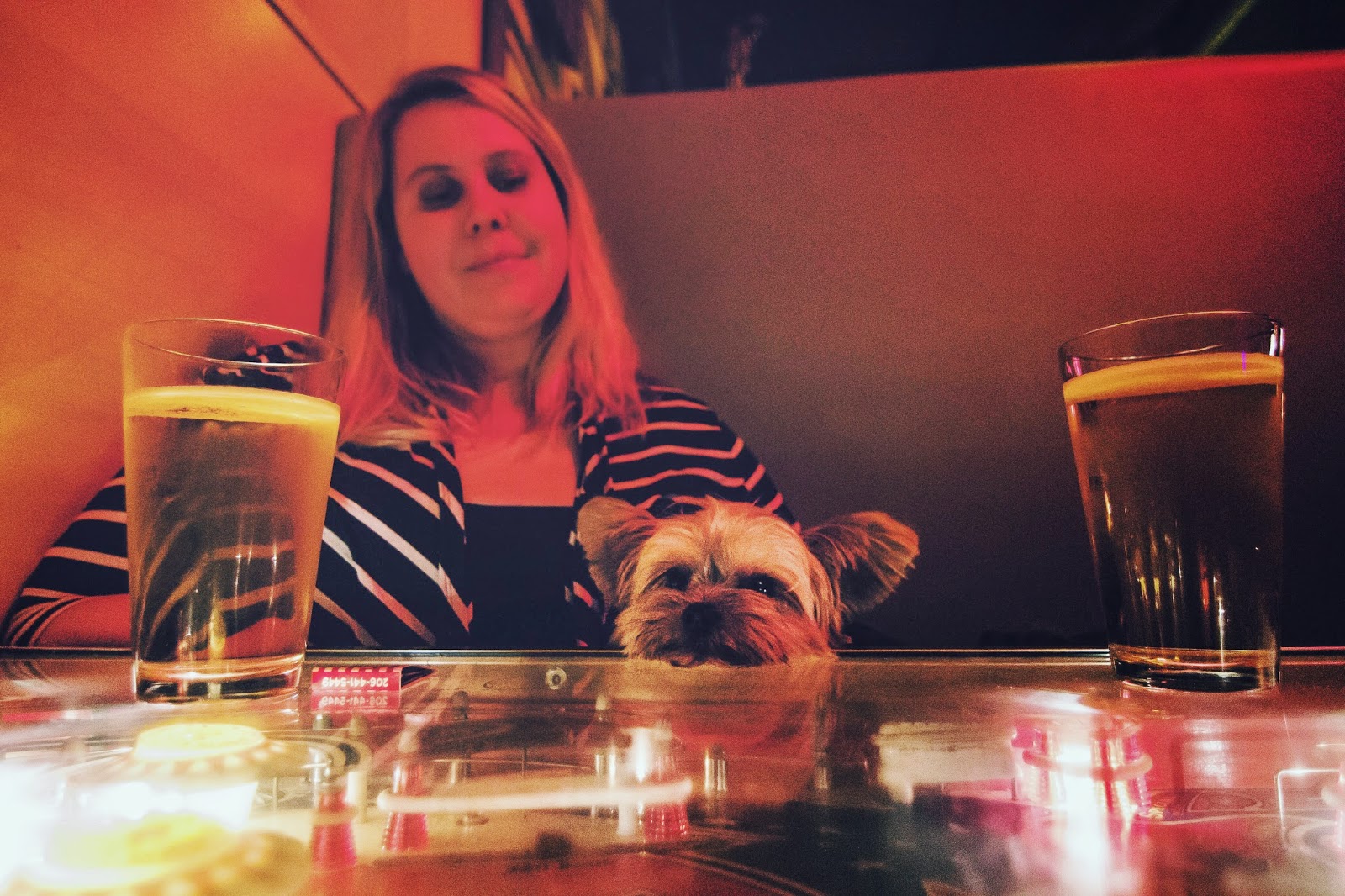 On Friday, I was walking back from SBUX when I saw this mama and her pup snoozing while they waited for their human. 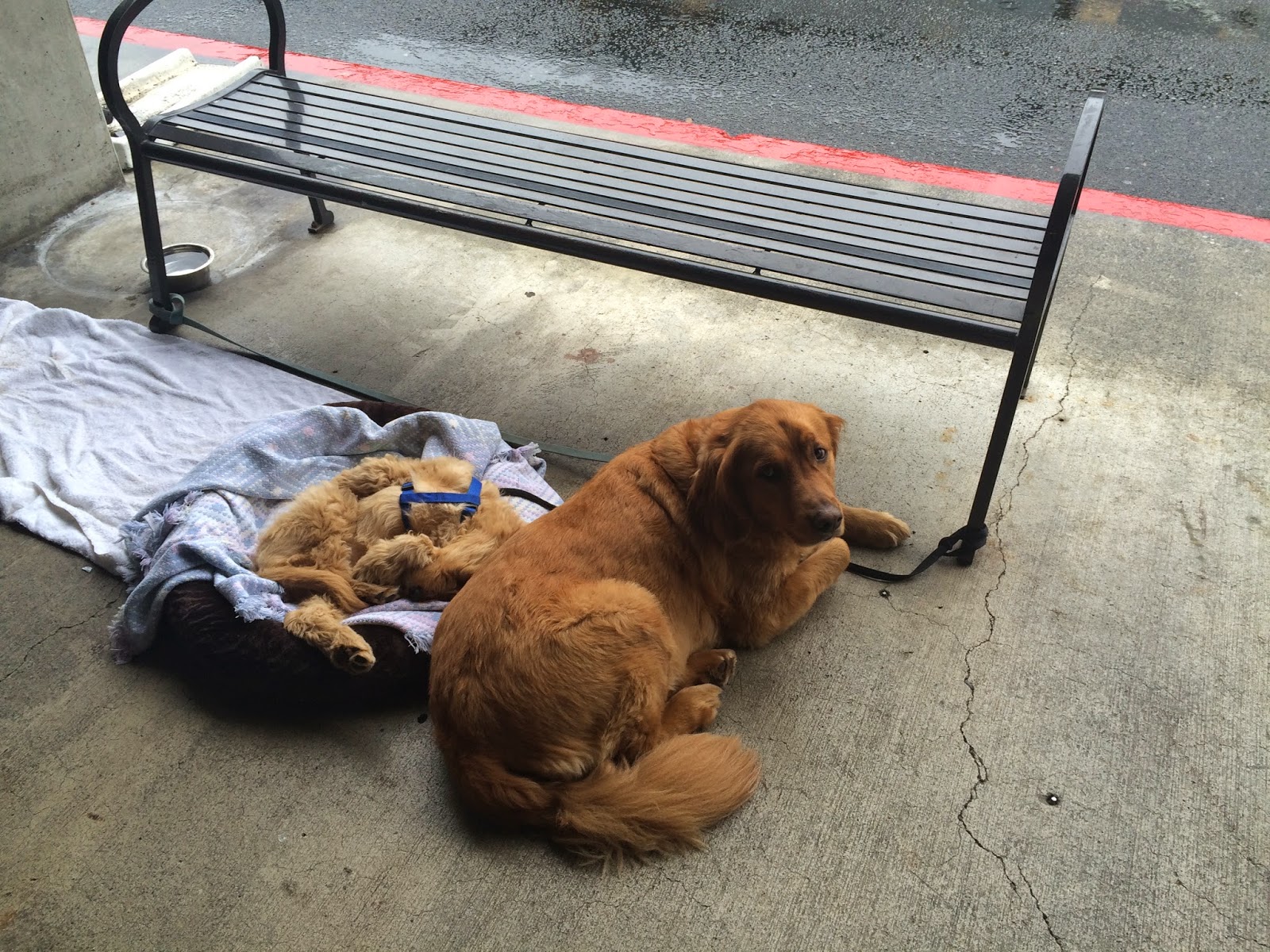 Saw this driver in front of me on my way home, and yes, we were close to the Microsoft studios. 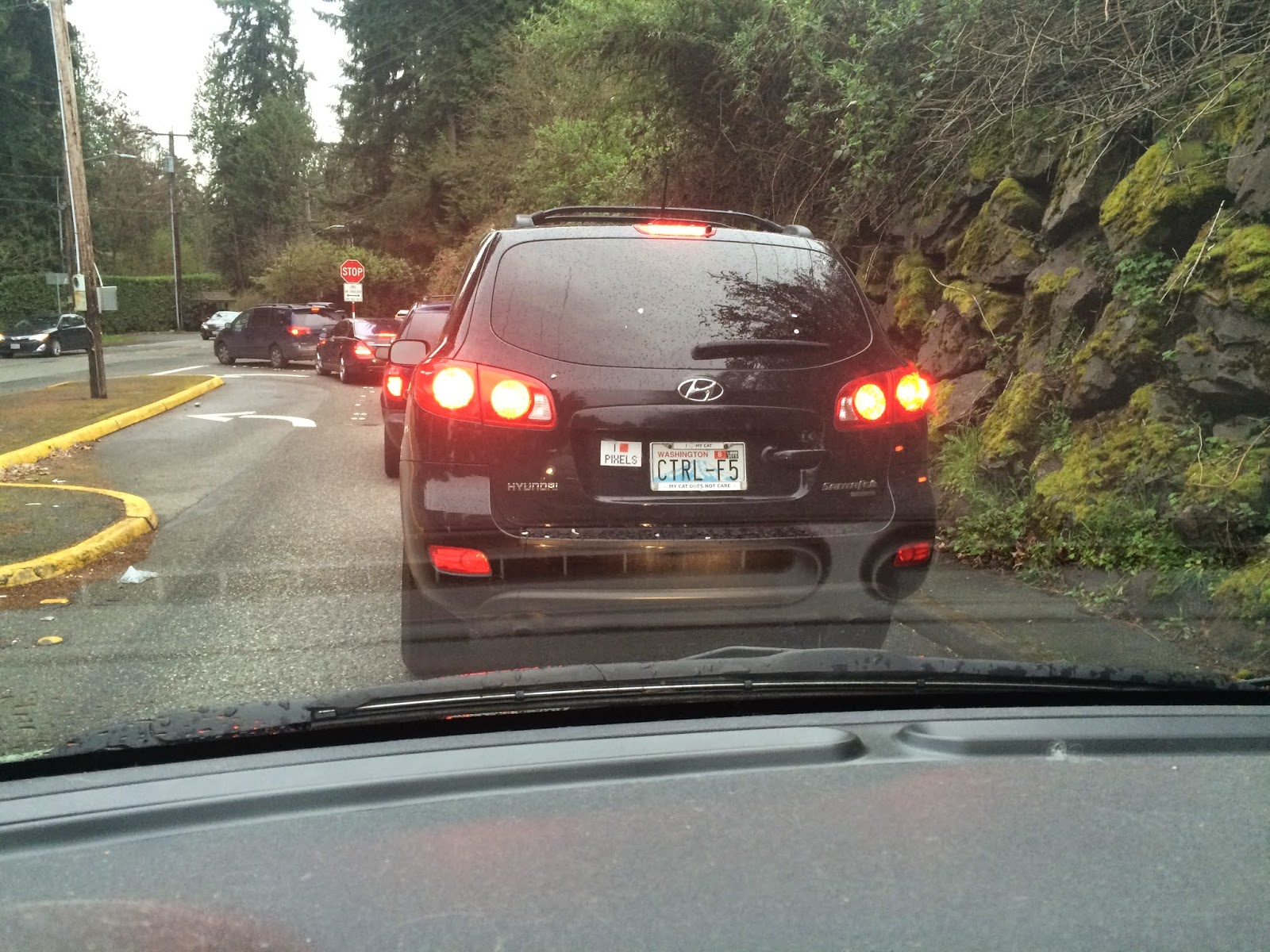 On Saturday, Zach woke me up at 8 to tell me something about a car and the dealership and AAA.  I told him I would call back in 30 minutes when I was “awake.”  I texted him to say that I was going to swing by SBUX and that I would meet him at the dealership.  This is when he got very frustrated with me and my inability to comprehend anything in the morning.   Apparently, he got a flat tire the night before, put a donut on, but the car wouldn’t go over 27 MPH.  I drove over to his apartment and he told me that he had called AAA, but because it wasn’t an urgent matter, they wouldn’t be there until 12:30.  This is when I wanted to go home, but Zach wanted to hang out, to which I said, “but you don’t have coffee in there!”  He placated me with a Hershey bar for breakfast. 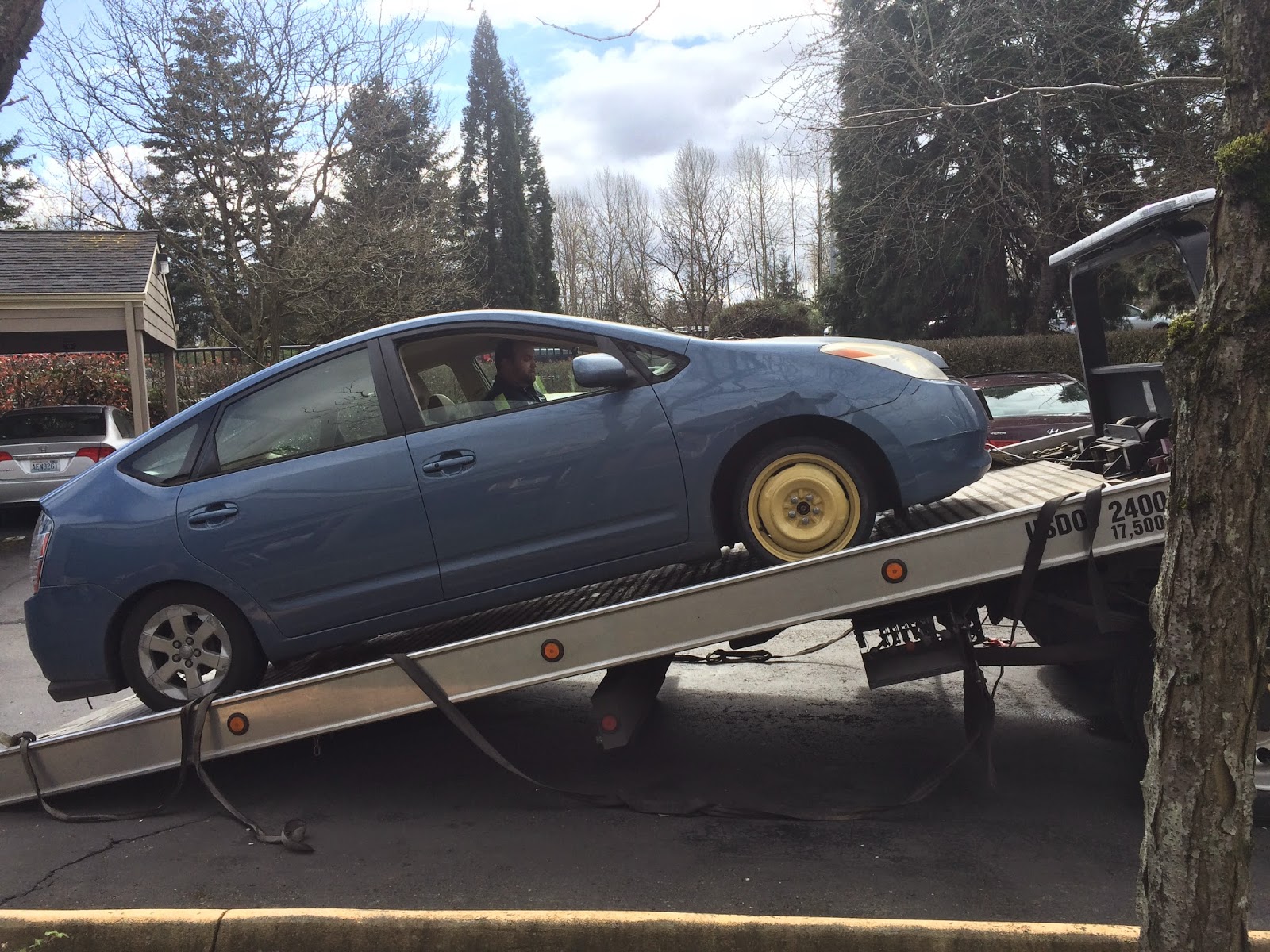 After we finally got the car where it was supposed to be, we picked up food and Tristan made us gourmet burgers.  Mid-cook, Tristan asked Zach to pour beer into his mouth.  Something is not right here. 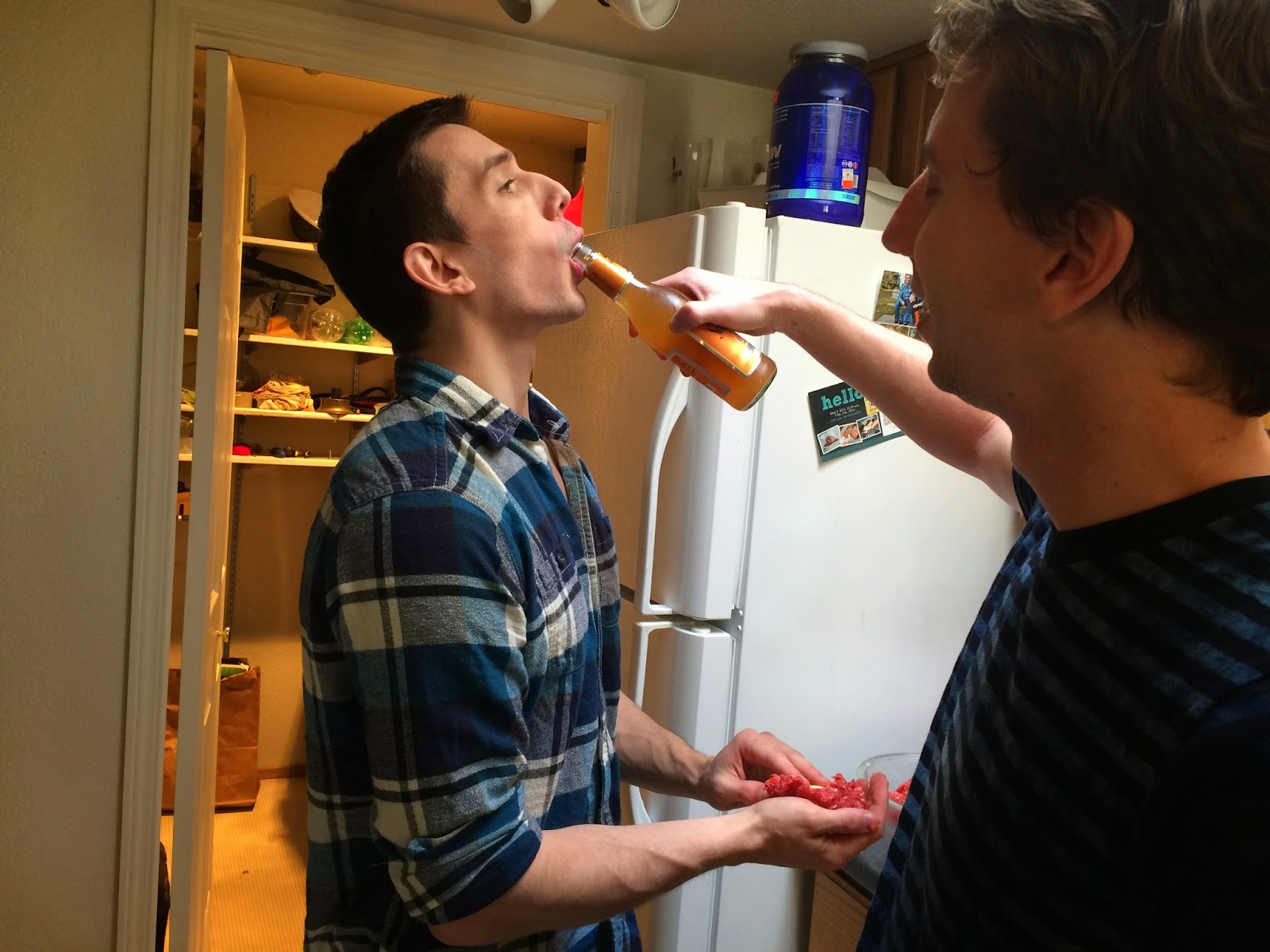 Yup, still not quite making it. 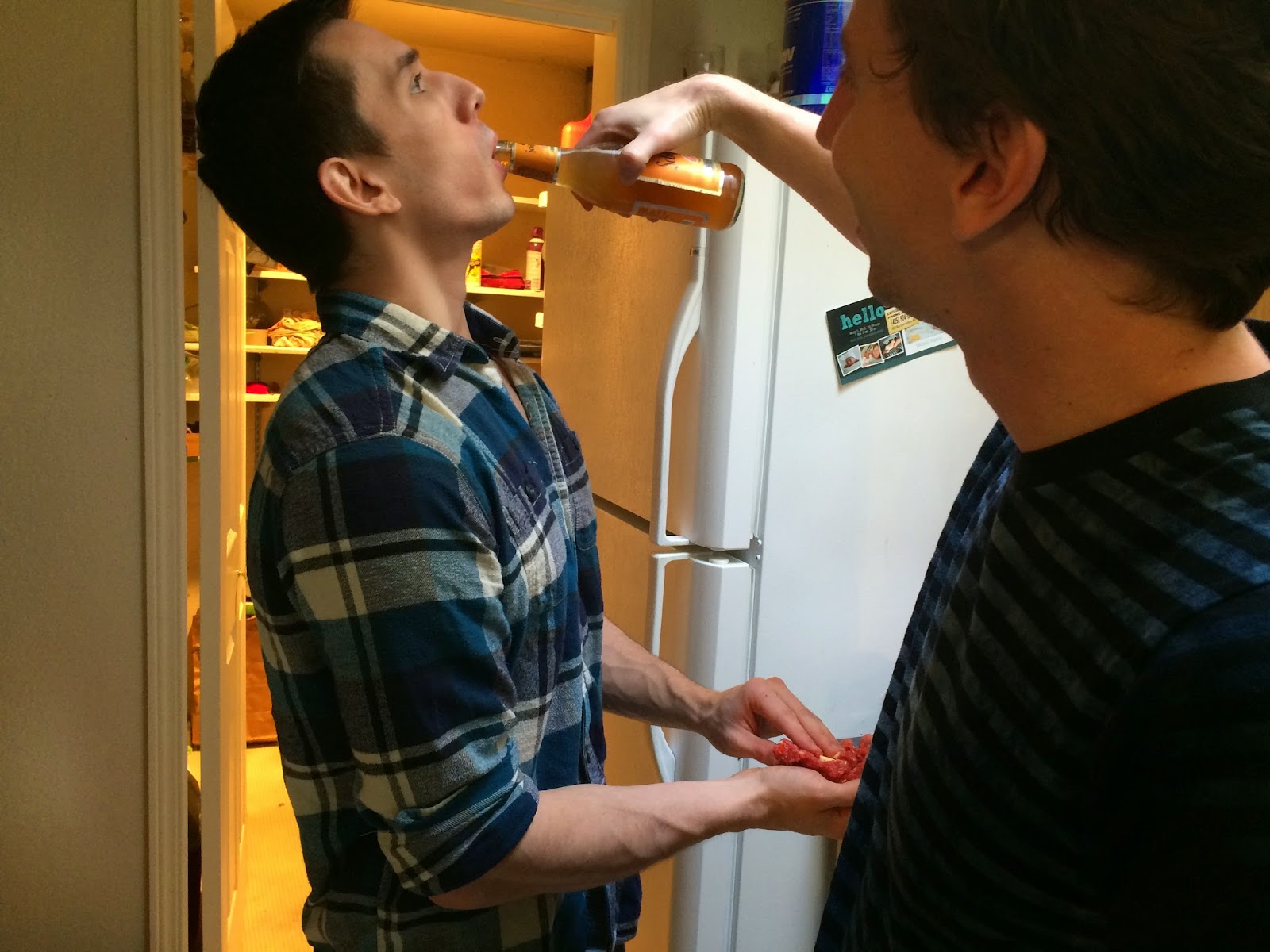 Tristan: Go ahead and eat.
Me: No, you cooked us lunch, the least we could do is wait for you.
Zach (with a mouth full of burger): Yeah, I would never.

I went home after that to write out my Easter cards, and then showered and went back to Zach’s for a nice evening stroll followed by binge watching the Unbreakable Kimmy Schmidt.  I’m not sure, but I think I ended up going for a walk to the dog park with Zach and then more Kimmy on Sunday – with only a smattering of all the errands I needed to do in between.  This is how I get so behind!

Hope all is well and that you have a lovely Easter.  More soon!

Posted by skcorynaffit at 4:09 PM