I called Bails to wish her a happy 17th birthday.

Me: How are you?
Bails: Old.
Me: What does that make me?
Bails (without a moment's hesitation): Perfect.

Zach has been squirreling away magic cards for a while now so that we could have a card house event.  Basically, we take 15 pounds of cards, use them to build a card castle, and then we take rubber bands to knock them down.  You know, you're typical Tuesday night.

Kelly: Why aren't we watching House of Cards right now?

Me: You're killing me.
Matty: Killing me softly.

Tristan: How many are you bending?
Zach: As many as I can.
Tristan: Why don't you drive it over with your Prius?

At the end of the night... Matty, "Thanks for inviting me.  It's been MAGICal.

I took a lot of pictures throughout the process just in case they didn’t make it to completion. 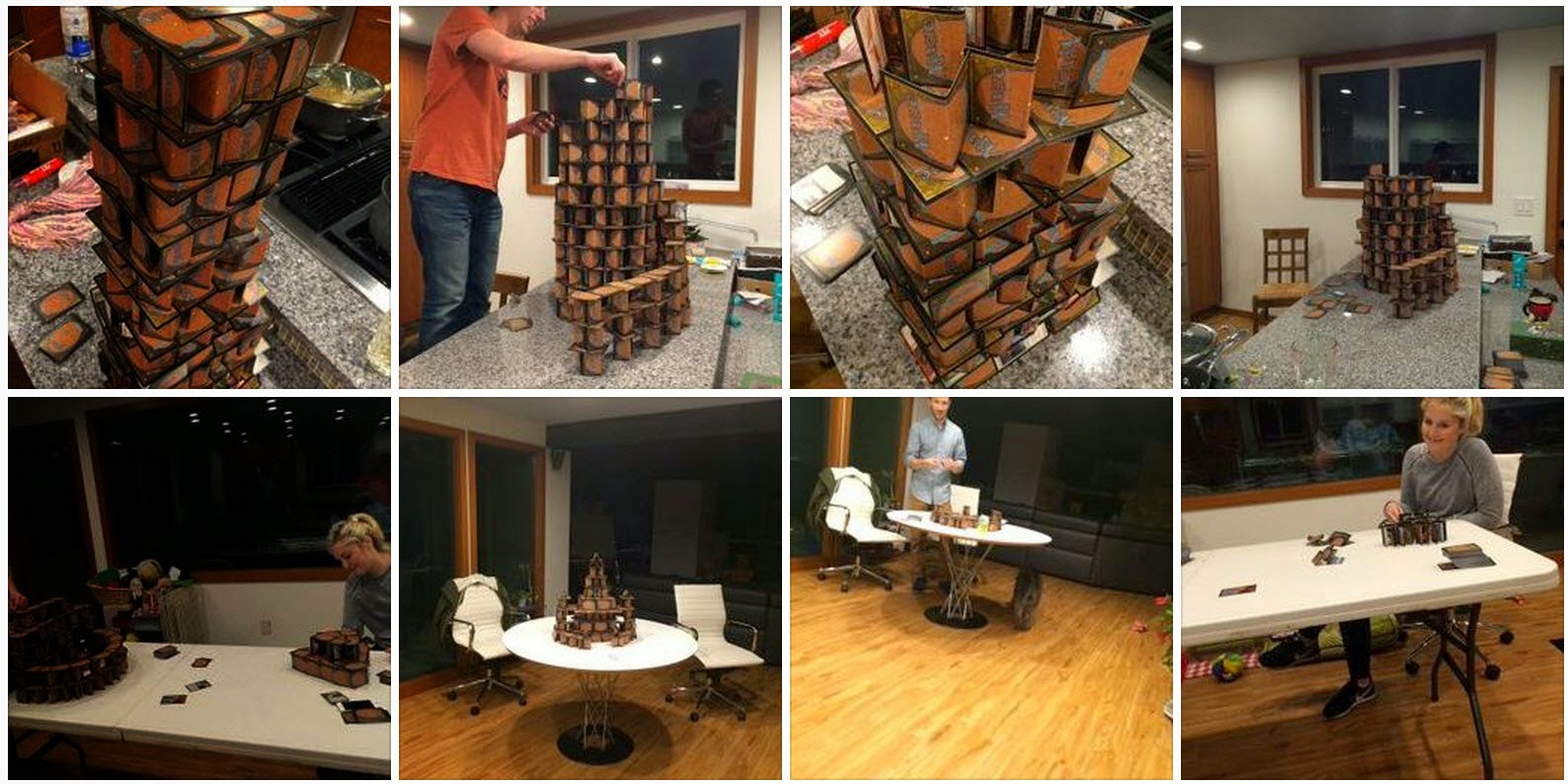 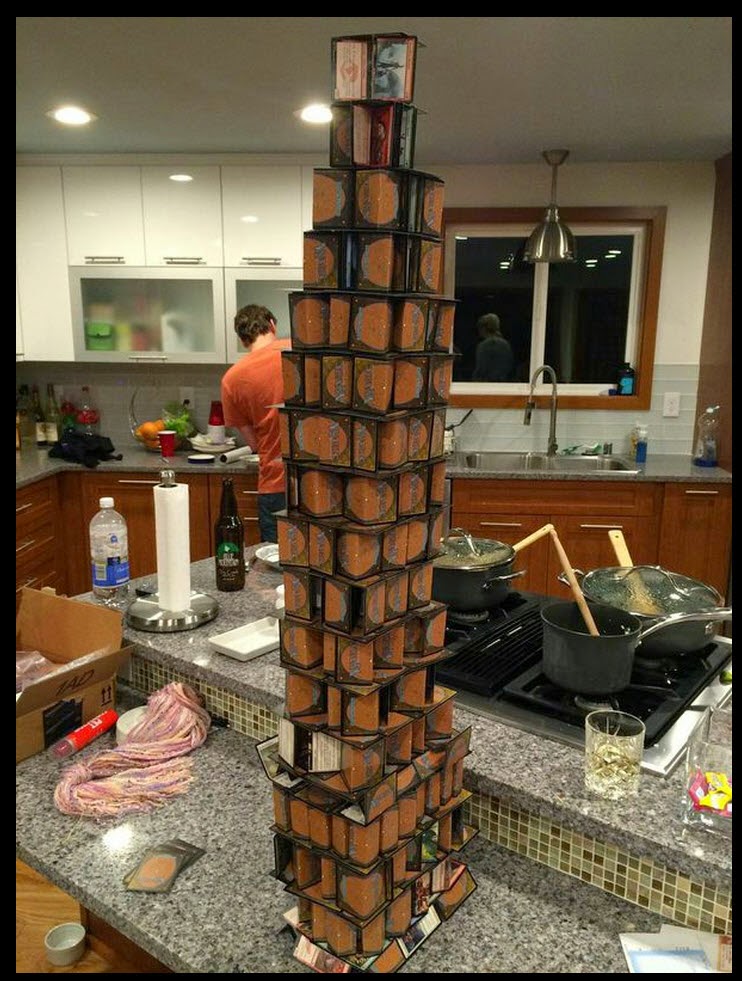 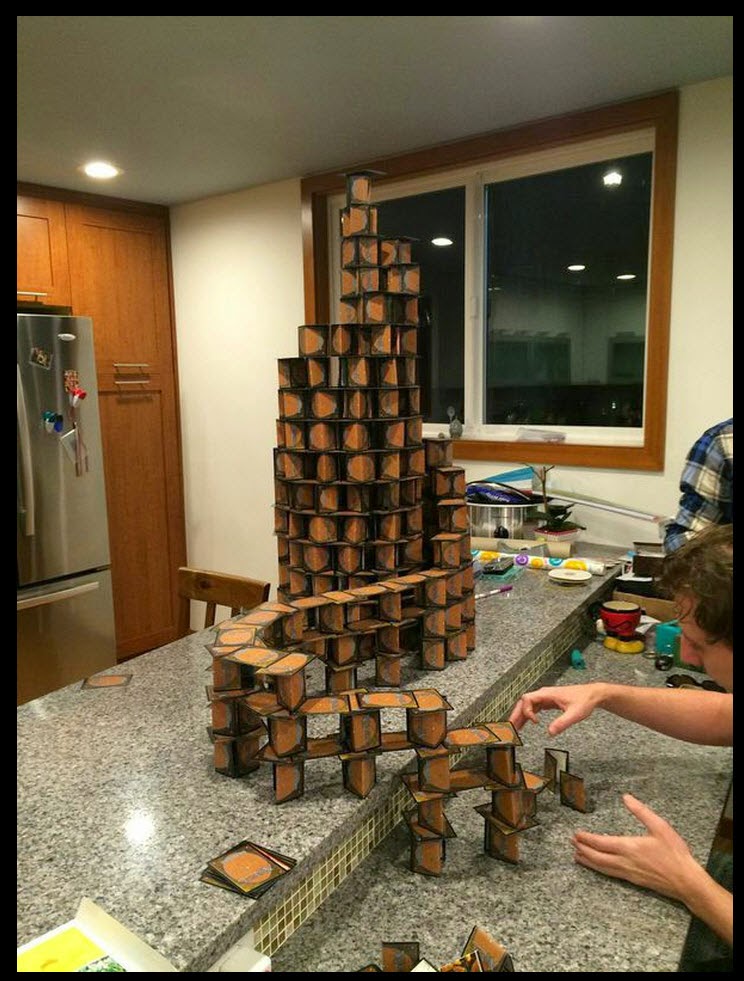 My memory is pretty hazy on what happened Wednesday through Friday.  I vaguely remember Dawne and Jordan getting back from California, and pups being reunited ever so briefly before I brought Percy to NY.  My parents had their most efficient trip to the JFK yet.  They left at 5 am, picked me up at 6, arriving with barely enough time for Percy to make a pit stop, and then we were back at in JV by 7:15, which meant I got in a quick nap while the world's greatest mom made me a ham before Briana, Eva and their adorable sons arrived for breakfast.

Briana's husband Rob bought their son Austin a book that was called something like "pigeon takes a bath" but Briana thought the book was really for her in reference to the fact that she barely showers anymore.

Eva: Oh! The schools in Brewster are awesome.
Briana: Really.  You should tell Rob that.  I think we're going to move.
Eva: Oh yeah? Where do you want to move?
Briana: California.  But realistically, Mahopac.

Then... I took another nap, way longer than I expected, but still in time to go down to Sean and Stacey's to decorate eggs.  When I arrived, Bailey was grilling her delicious pizza... which we ate in celebration of her awesome SAT scores.  And yes, Sean did make Bailey convert her score into "old school" score so that us old folks understood how truly great it was.

Jackie:  You know when Aunt Carla was in high school, she and her friends Sharon and Kristen went across the street to the A&P to get cookies before track practice.  They ate way too many cookies, and then decided to go sleigh riding down a little hill and Carla ended up twisting her ankle and one of the friends peed themselves.
Sean: Yeah, well I went to Grandma's Pies with my friends after the getting inducted into the Honor's Society.  On our way back, I got pulled over.  But when I told the officer we were full of pie celebrating out Society of Honor, he let us go.

Jackie: We'll be up at 7 am!
Carla: Wait is that really when we're waking up?
Jackie: Oh Carla.

Jackie: Let's go to mass early because we're up early anyway and then maybe it'll be shorter.
Carla: 8 am Mass? Yeah.  I'll see you when you get back.
Jackie: It's never too late for mass, Carla.
Me: Do you mean early?
Jackie: I got it, Carla can just make us pancakes and have them ready for when we get back.

Jackie: You know the other day, the doorbell rang, and Tim was at the door.
Me: Oh yeah?
Jackie: Yeah, he's going to the formal with Bailey.  So when my mom answered the door, we had to call for her, and when Bailey got to the door... he gave her a big kiss!
Me: Oh yeah!?
That's when Jackie pulled out a big Hershey Kiss
Stacey: Heh.  Never gets old.  Remember when Carla worked for Hiscox.

At one point Sean broke out the glue gun, upping the Easter egg game big time.  Doesn't this one remind you of a Needler? Or am I just a Halo nerd now? 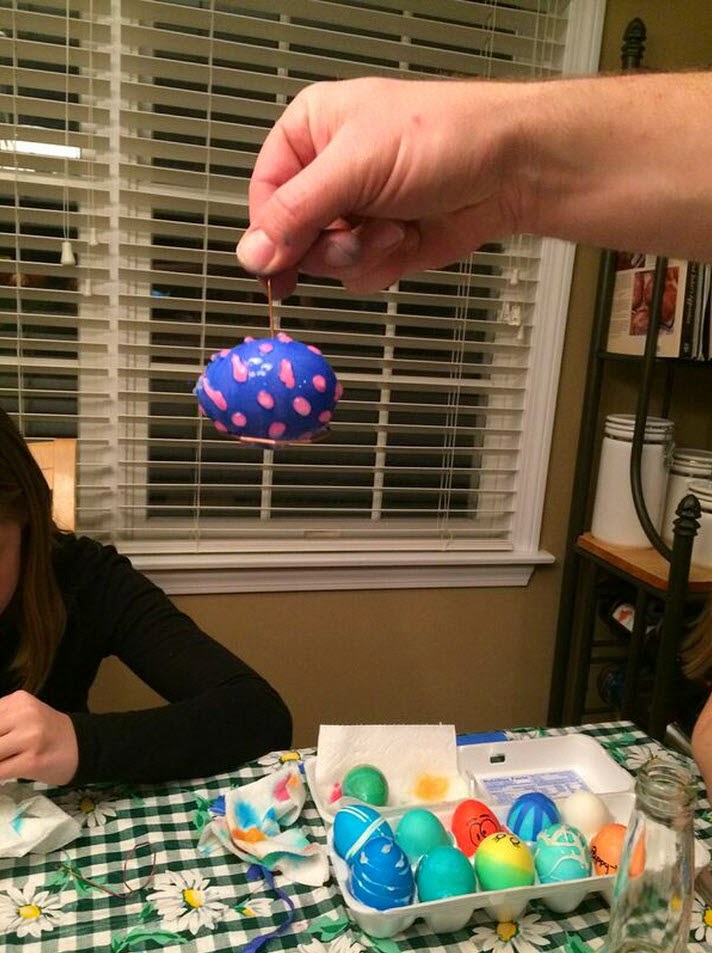 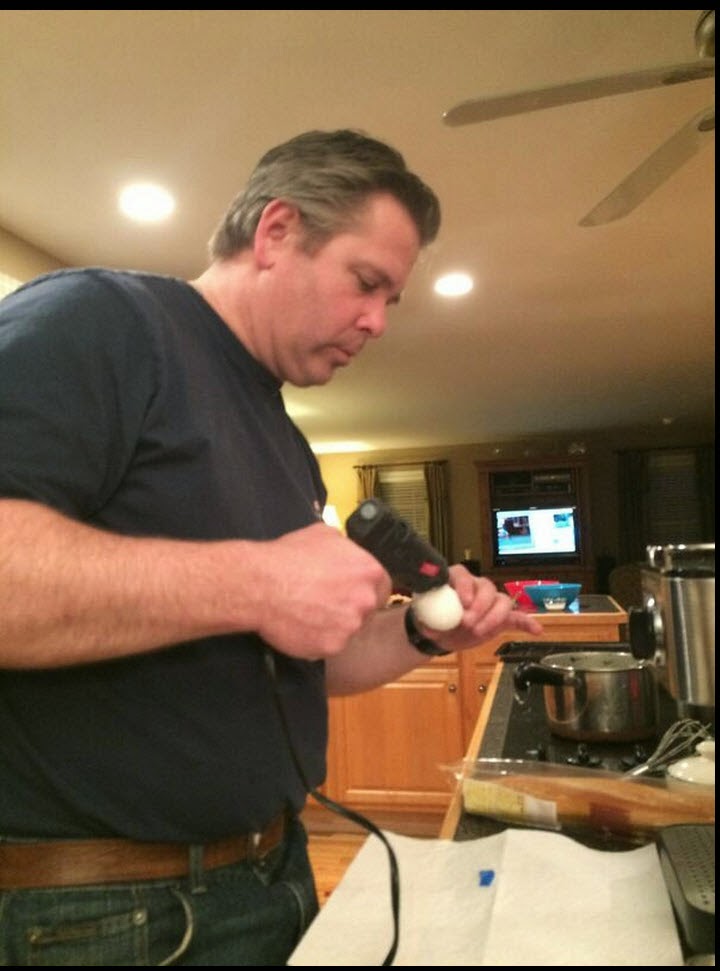 Plus I made a Jesus Egg. 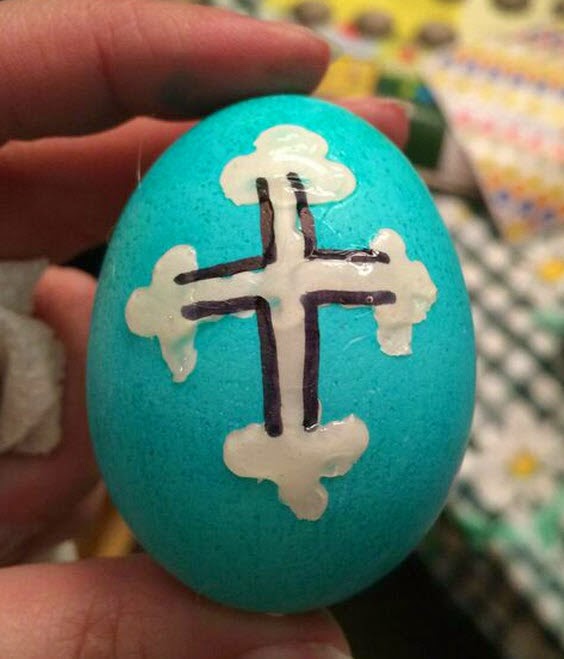 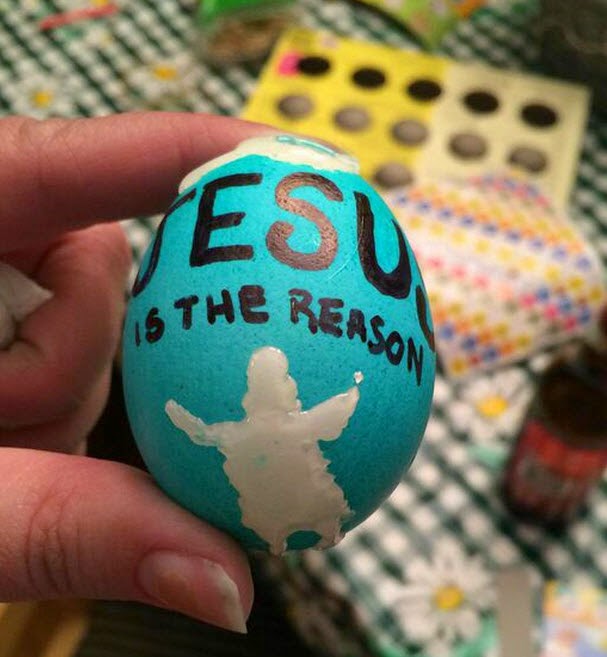 Bailey: It's a wonder we got done so fast (holding up one of Jackie's eggs.) 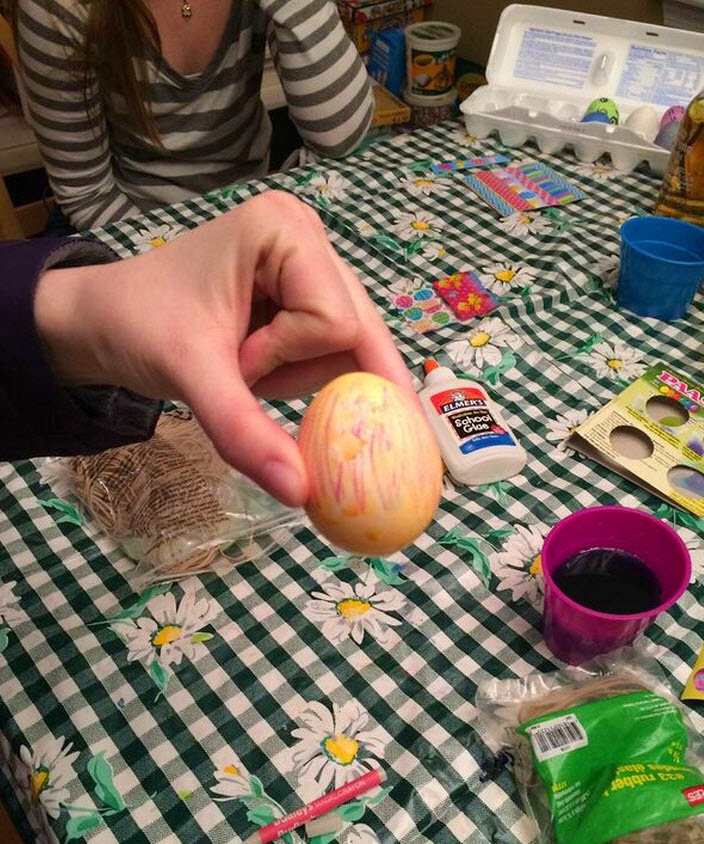 Jackie: So Aunt Michelle found an old video of us singing Happy Birthday to Katie and one of her parties  The video zooms in and out on Bailey's butt and Michelle became really concerned because she thought [her husband] Doug was recording.  She was pretty relieved when she found out it was really me.

Jackie: Dan Radcliffe was found on the street.
Me: What?
Jackie: Oh, he didn't live there, that's just where he was discovered.
Me: Thanks for the clarification.

Bailey showed me her brand new redecorated room and super cute formal dress.  They were both awesome, but all I could think of was, Whoa.  Bailey is such an adult.

Morgan: I picture you as Monica from Friends but I see you as the fat kid version.
Carla: I'm not sure what is more flattering that or when I was called Olaf.

Don't worry, I found my basket on Sunday morning.  My mom was definitely not pleased that I dressed Percy up as a rabbit and then fed him rabbit. Whoops.

Patrick was an altar boy at Easter mass.  I'm not sure if taking pictures at church is cool or not, but I took A LOT of my nephew.  So proud! 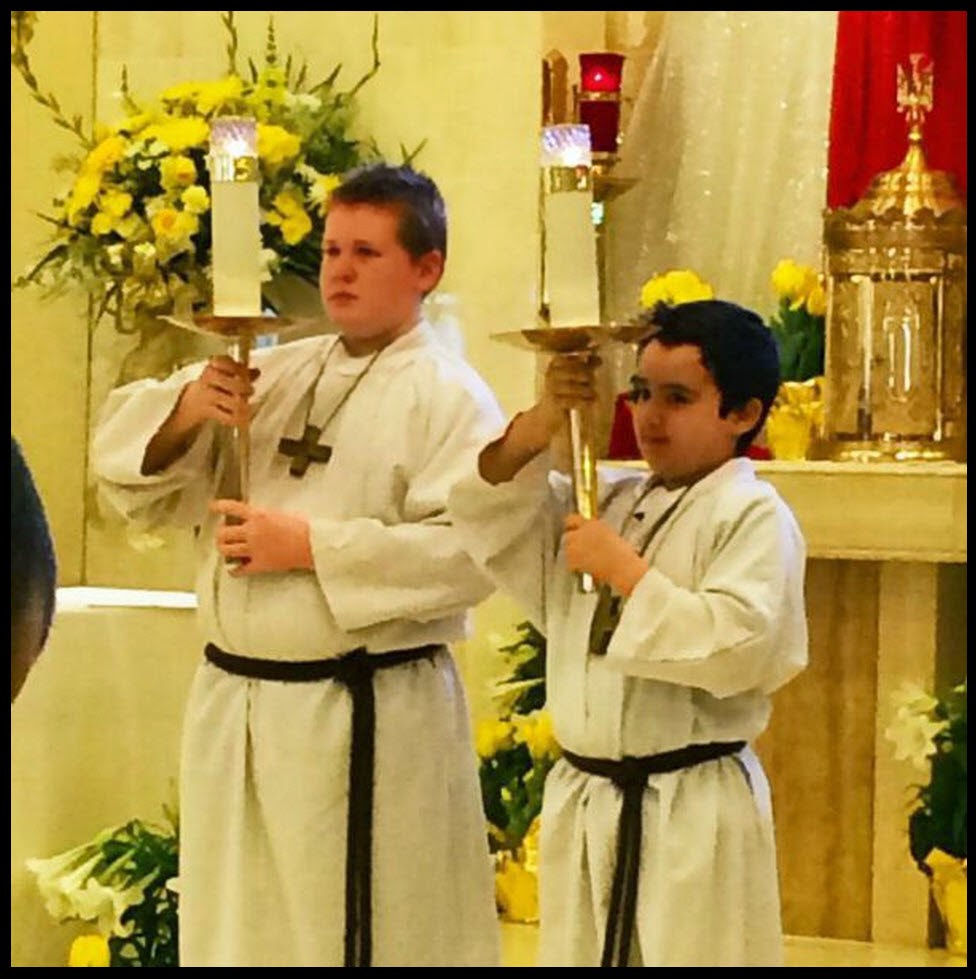 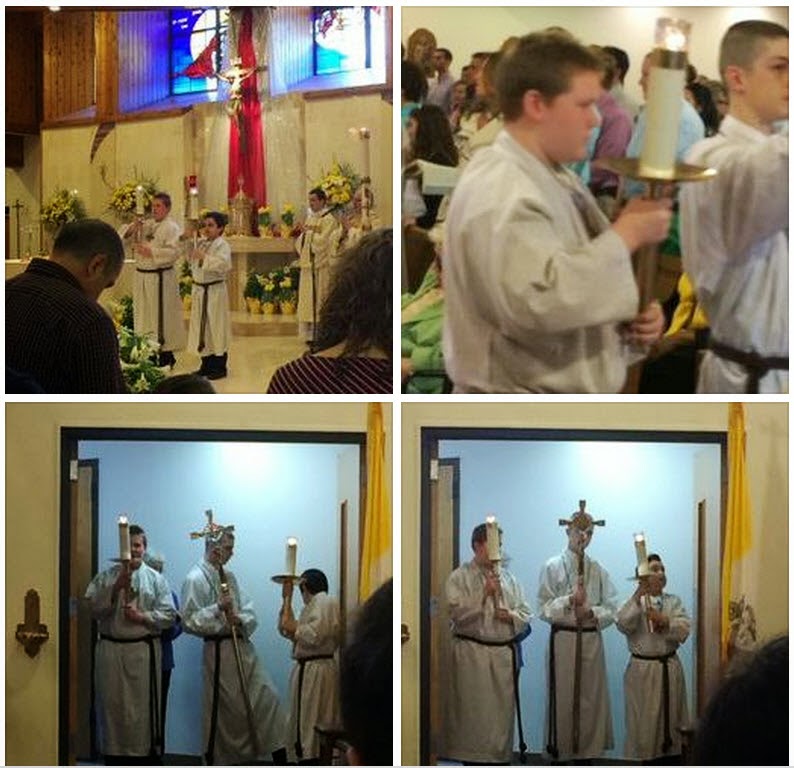 Seton was really packed so they had another mass in the school gym.   And that mass, got out like ten minutes before ours did, which is when my sister leaned over and said, "They won."

Jackie: On our way back from church we saw fire trucks going up the road so I yelled, "Oh no! Carla was making us breakfast!"
[Don't worry, it wasn't on its way to Sean's house.] 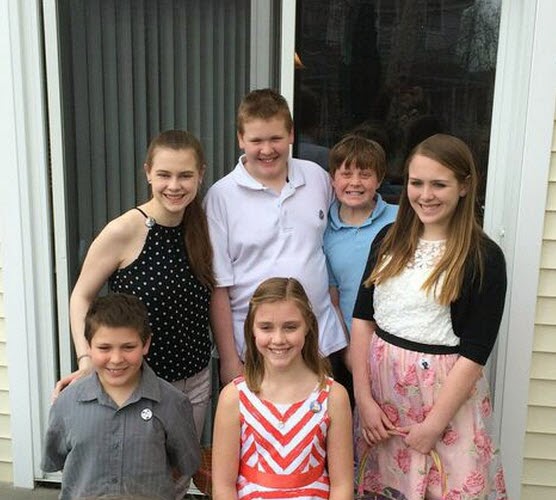 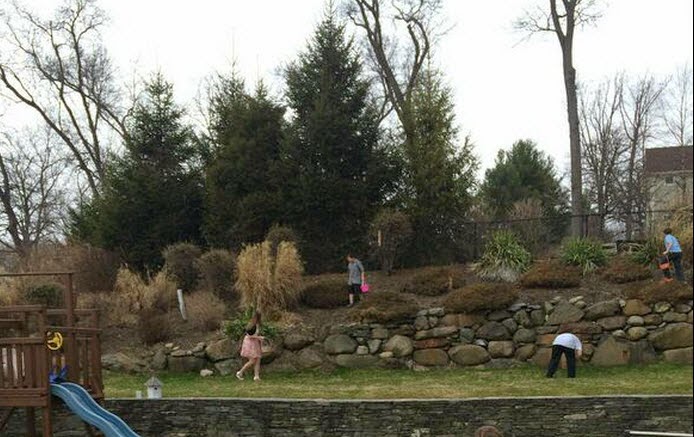 Bailey and Jackie opened all of the crazy Archie McPhee presents which was a big hit.  Here are some of the quotes from the opening. 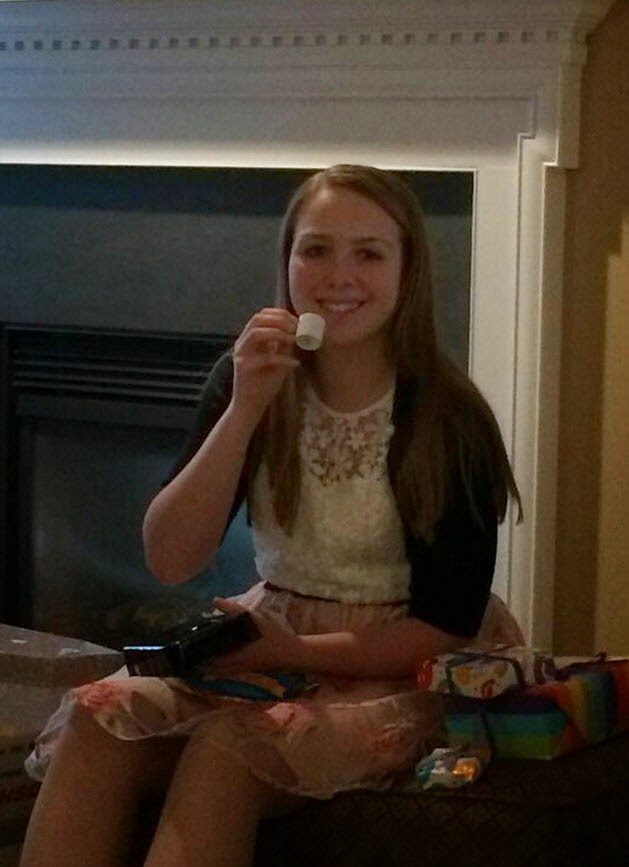 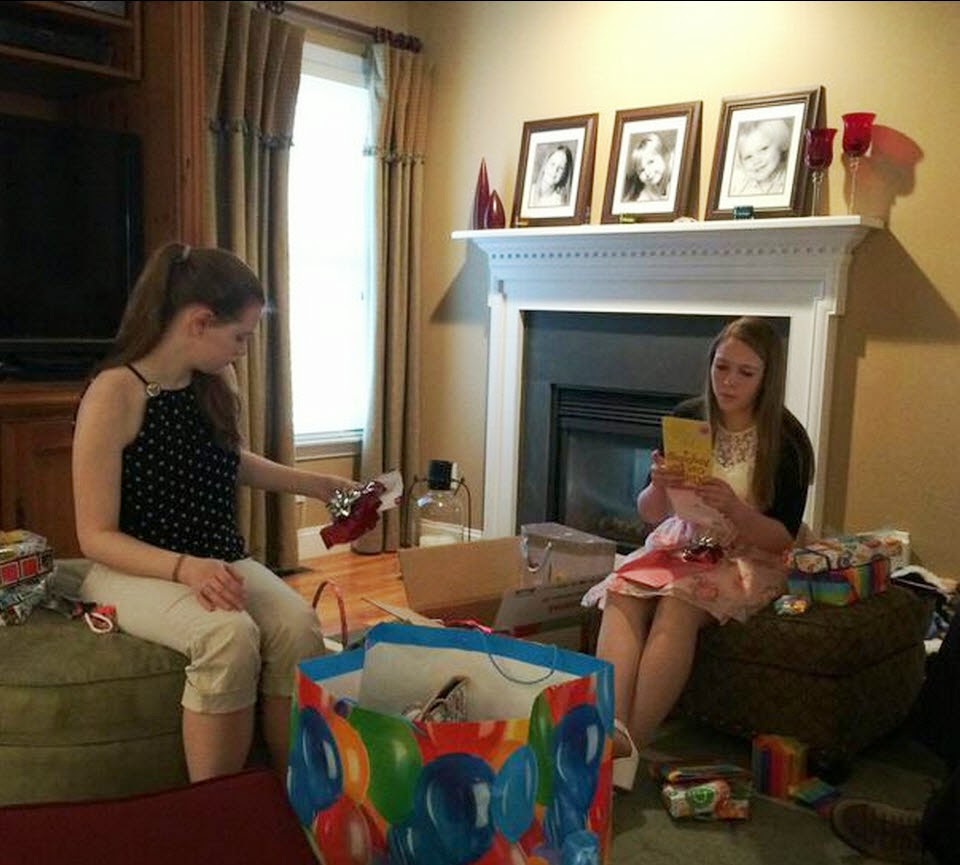 Jackie: Who needs adult diapers when you have instant underpants: just add water.  I'm definitely going to use these one day.
Carla: I really hope I'm here that day.
Bailey: It might take 20 years but she will use those.

Bailey: Emergency Googlie Eyes! I'll keep them in my purse!
Jackie: I'd keep my underpants in there!

Jackie: Ooh! A Sarcastic ball.  [shaking]  Does it need batteries?
Sarcastic Ball: Is the Pope Catholic?
Maureen: It works!

Bailey: Shakespeare Insult Bandages: adding insult to injury. Oh I get it.

Jackie: She always has to sit on the same chair as me even if there is one right next to me.
Morgan: That’s because you never let me use the computer or the remote.
Jackie: I change the channel when you need me to.
Morgan: But you don’t let me do it myself!
Jackie: I just like to control everything okay?"

Mr. Larsen’s pup Giz (brother of Sean’s dog Suki) joined us for Easter weekend.  It was the first time I had met this little guy, and he was so sweet and chill.  I’m so glad I did get to snuggle with him for a bit because since he unexpected died.  Super super sad and not just a little bit shocking. 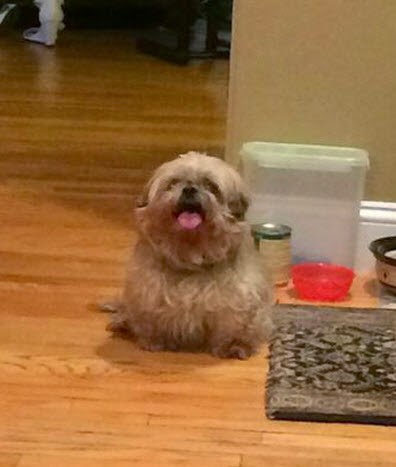 And his bro Suki: 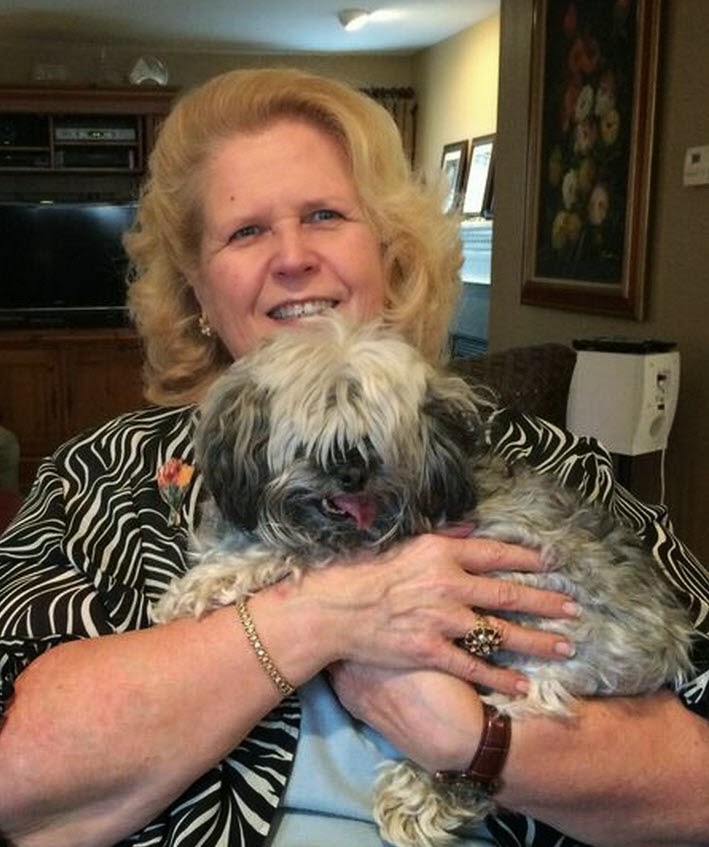 And Bella, who is apparently also a lap dog: 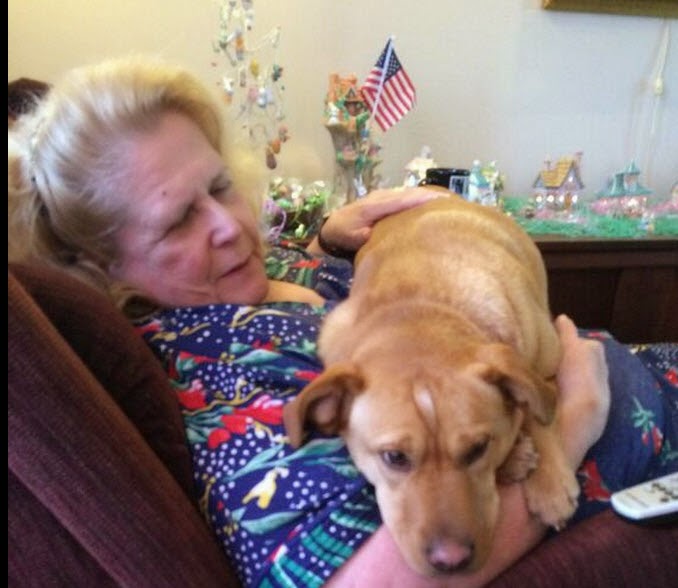 Stacey made an amazing dinner, hanging out with the fam was amazing as always.  The next day, my parents took me and the boys (my nephews + Percy) to Bear Mountain to run around a little bit.  After that, we headed over to King Buffet and I got to find out what all the fuss was about.  It was just a perfect pre-birthday day that was really all about me.  Then, sadly, it was time to head back to the PNW.

I saw this at the airport and thought it amusing, especially “even if it has no value” paired with the super old cell phone. 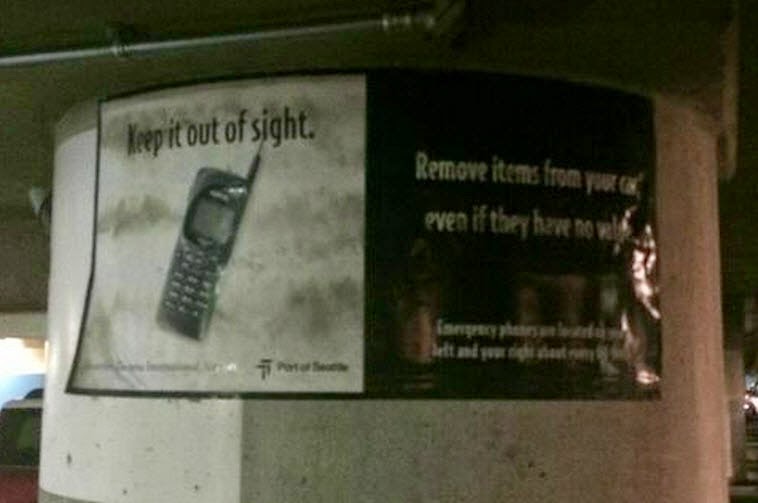 Posted by skcorynaffit at 1:57 PM