No Sleep Til Brooklyn


Made a trip down to Ikea with the Lucas in the Van and discovered Luke’s love of bended wood.  Resisted the urge to buy 6 Billy Bookcases, but I did buy a bed, so fairly successful.
Tuesday was pretty rough for me.  Starting with a  flat tire that led to getting 4 new tires, a crazy day at work, trying to put together bed (step one, drop large heavy piece of wood on toe, step two, resist urge to throw up and cry, step 3, assemble ½ of the bed, realize it’s all wrong, take apart bed, start again.)  I didn’t finish the task, jumped into the shower, got out, realized that mattresses were blocking all paths to clothing and shoes.  Realized, I really might need to cancel HP viewing as I really couldn’t find shoes.  Then I remembered I leave a spare pair in my car.  Returned home after midnight, exhausted and without bed.  :/
Here’s my “Going without Shoes” Dane Cook Multi-Media break between stories, ironically introduced to me by BDug, who I almost canceled on because I was not willing to go without shoes. Wait no, actually, I first heard about it when I was driving Deb and her friends home drunk one night with the top down as they yelled one liners from DC (that made no sense to me at the time especially “that could be a melon looks like a coco-nut.” Huh?) and as a double irony, I hung out with these ladies this weekend (It’ll all tie together later):
(4:20)
Zach: I slept in mom and dad’s bed last night.  I don’t know what their sheets are made of but it feels like unicorn skin.
Uncle Ray: Those sheets are so expensive.  I think they are 3 or 4 hundred dollars for sheets!
Zach: Well, of course they are!  Think of all the unicorns they had to kill to make them.
Zach (on the phone): There are 4 people waiting for me and by 4 I mean 2
Lucas (to me): On a planet where every number said should be divided by 2
Zach: What is that and why is it wearing a thong?
(**Need to add picture of this for full effect.**)
Had a lot of pressure between the great room switch of 2011 and getting T-Shirts made for the Bachelorette Party at the last minute (naturally), packing and then I don’t know about the rest of the Seattle crew, but I was hit with a monster of a headache all day on Friday and ended up having to leave work early before I got sick at my desk—and then rallied to catch plane to NY.  (Side note: the chick sitting next to me on the plane kneeled down on the floor and slept with her head on the seat in case anyone wanted to try something different next time they are on the red-eye.) 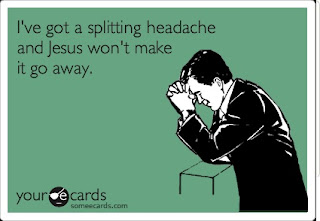 Debina’s Bridal Shower was at 10:30 so we headed right over to start setting up.  Mark took Deb to the Bowling Alley first and tried to convince her that the shower was a morning of bowling until she finally ordered, “Be Serious.  Take me to my party.”  Then the usual shenanigan’s occurred.  I found it particularly humorous when opening up a Hallmark “1st Christmas” ornament, Deb said, “I hope make we make it that long.” (She is getting married in September.) 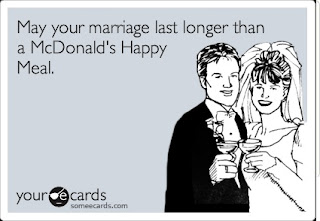 While waiting in driveway to pick up one of the Bridesmaids, you could see in the window directly straight ahead and above us in the kitchen, Deb’s brother and baby niece.  In response to our “Awww look at the baby!” my father looked to either side of us, into the forest and in the empty car next us, saying, “I don’t see a baby.”  (And yes, I asked my dad to drive us to the party—just like old times.) 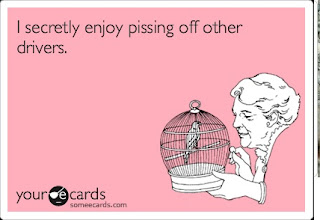 We grabbed some dinner in White Plains and while we were there, I might have started a conversation with “Did you know that the rule I before e except after c has more exceptions than the rule itself.”  And then realized, that while I find grammar fascinating, it is actually wild boring for the general population.  Tiffany Fail.  (Here are some of the exceptions if you were curious: http://www.jimloy.com/language/ibeforee.htm ) 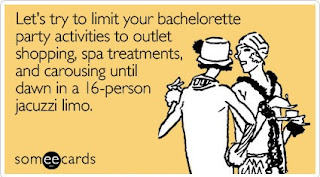 The Limo was late because the guy got a ticket.  Galvin said if Deb was a Bridezilla she’d be flipping out at that point but she was happy with the plan of demanding he show proof of the ticket upon his arrival.  One of the 13 things that Deb had to do was getting a fast food person to yell, “Mad Props to Deb Hall” so they did that while we were waiting.
Deb: Then Jenine said "oh you'll do."
Jenine: Yeah, I say that often.
Deb: And then she told him to do it again with meaning.
Erin: There is a Wal-Mart right there.  Why don’t we go in and get some beer while we wait.
Me: They sell beer in Wal-Mart?
Erin: This *IS* America. 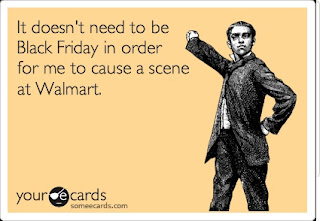 The first bar that we went to had epic music.  Everything from Depeche Mode, The Cure to Madonna and Black Box.  So, basically, old enough that I actually knew the words to the songs.
We were all wearing little hats and funny headbands.  I caught Maureen staring and squinting at my tiny pink glittery hat, so I helped her out and said, “It says ‘Party Posse’.”  Mo: Oh! oh.
Julie: You’re that much younger than I am?
Erin: I love that this has been a new discovery for you.” (Every year, for the last 20 years.)
I guess I should mention how awful the limo driver was.  I meant to give suggestions of other possibly career paths he might take, but he would have put the divider up like he did when we were trying to give him directions due to his lack of GPS and knowledge of NY roadways.)   He had a bad day (ticket) and did a lot of door slamming, complaining, driving the wrong way on a one way, got lost, had the NYPD blue put the lights and sirens on to get moving as we ran to get into the car, and 4:15 when people were particularly tired and angry and we only had 2 miles to go, he stopped for gas, and couldn’t even do that right.  It was then, when the guy was running back and forth into the shell station, that I found two bottles of bubbles.  Deb didn’t look like she wanted to use the bubbles, so I told her I was sticking it into her bag as a nice little surprise for the next day along with two dollars that had slipped out of Julie’s pocket and was left in the limo.  How could you not love getting bubbles & bucks with your hangover?  (I can’t say my high energy level at this point in the evening was all that appreciated, but I WAS told to bring my A game.)
On our way home, Kristine shared two needs with us.
“I need to pee.  This is serious. I popped out two adorable nuggets, I can’t hold it anymore.”
“I want some Disco Fries and a bacon, egg and Cheese in the face.  Really, any greasy food that I can shove in my face would be fantastic right now. “
On my way home from the Airport last night, I heard “No Sleep Til Brooklyn” and started cracking up imagining myself clever enough to have played this song while the whole limo was tired at 4 am on Saturday, and Deb promptly punching me in the face.  It would have TOTES been worth it.
Sunday, was the beach party down at the lake.  Eva and I won all three rounds of the balloon toss. (Maureen had told everyone that no crying was allowed and that the losers had to watch the winners eat candy in front of them.  I told Luke this today and he was like “Wait a second! You can first tell me how proud you were about winning the balloon toss and THEN tell me you were playing against little kids!”  There were adults too! (But yea, many were small children.) 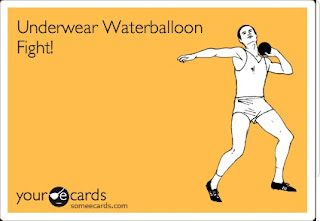 Evivova: Finally a sport we're good at!
Frita: You were really busy this weekend. You didn't even have enough time for coffee. That's probably why you won the balloon toss. You had steady hands.
Towards the end of the egg toss when there were only two teams left, and the people were very far apart, my niece Morgan got an egg to the face.
(her sister) Jackie: You saw that right? She walked into that.  I did not aim for her face.  Tell me you saw that. 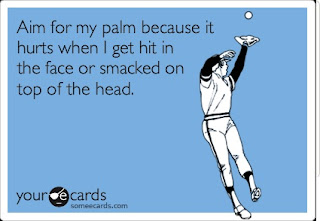 (referring to Briana and Evivova)
Bailey: Your friends are BEAUTIFUL.  I mean REALLY beautiful.
Me: I know. They really are. Imagine growing up with them.  I’m surprised I don’t have a complex.  Oh wait.
And finally, this afternoon, when Luke and Zach came to work for lunch, we walked into the elevator to see this:
Luke: Let’s move it to a different elevator so it will be like a game when whoever comes back to look for it. 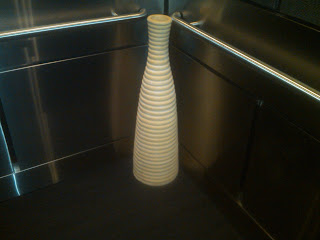 Posted by skcorynaffit at 3:02 PM