Here's the deal - Last week was completely void of activity.  Mostly, I went to work and then went to sleep at 7 because I felt like my bed was calling my name.  And I was sneezing a lot - either due to the fact that I pushed myself incredibly hard, or allergies.  Either way, I was sneezing so much that Rick, my office mate, would say "Bless you" once in the morning and assume that covered the rest of the day.  I think that's fair.  Still, I want to make sure that I amuse you this afternoon, so I am going to pull out some stories I left out last week and then fill in with funny things Luke said. 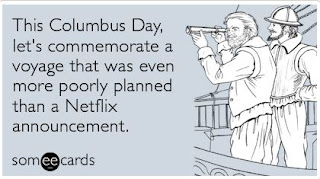 Before I left for my trip, I asked my boss if I should be abstaining from drinking or drinking steadily more and more in the next week to prepare for Oktoberfest.  He raised his glass of beer (during an all staff meeting) and said that the answer was obvious.  I wish I had listened.

Also, I made Brookies the week before Deb's wedding (I know, where DO I find the time.)  Rollie, after eating a Brookie, “The English fellow I’m in a meeting with just said "What a stodgy chunk of goodness." Rollie then later requested additional Brookies saying that he regretted having to be polite.  I wonder what the percentage is of people actually enjoy being polite.  Mostly, it's probably engrained into those who are polite, but if we thought about it....

In the car the day after Deb’s wedding:
Momela: What is James up to?
Me: He’s really good.  His boyfriend is from Vancouver so he might visit during one of his trips.
Frita: Didn’t you go somewhere with him?
Evivova: I went to prom with him.
Me: I took him to Doreen’s wedding.
Frita: Man, you sure have a special talent, Tiffany. 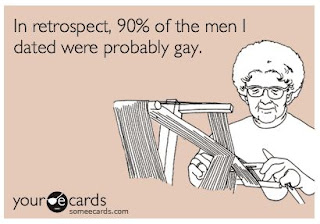 When we were listening to the Glockenspiel I could hear Sean singing, “Christmas chimes are calling Santa, we need you today!”  Followed by watching the horsemen battle and commenting, “Did you see that! He just knocked him off his horse.  You know that doesn’t always happen.  Sometimes the Bavarian loses.”  And finally, I commented that the one part looked like Eleven Lords of Leaping, and Sean said emphatically, “Yes, but suspiciously, there are only 8.” 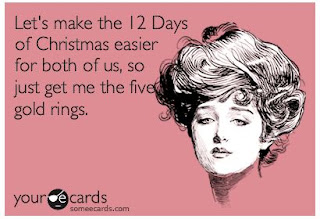 Me: I'm a lil drunk
Martin: Welcome to Germany.

Me: I need to go to sleep.
‎Lucas: You need to make this jet lag your bitch.
Me: Yes, and I will do that by using the tough weapons of a comfy bed and sweet dreams.

Zach shared a video with Kathi and I about knowing people from Germany.

Zach: Although, I don't know who any of the people he listed are.
Me: I can totally name three Germans. Kathi, Julia, Martin... ooh! Bonus points, Cori!
Kathi: Angela Merkel you should look up, the other two are not so important.
Zach: She is just the Chancellor, you can't expect me to know that, that would be like me assuming you know who Barack Obama is...
Me: What's a Chancellor?

I haven't been reading someecards.com for the last two weeks.  When I realized my lack of attention, I kinda panicked a bit, but then realized that there would just have to be two week of cards I would never read.  Sometimes you have to let things go, even if they are super intensely important to you.  Anyway, Shana was telling me that someecards has a dating site.  Oh. Yeah.  We immediately started working on my profile.  Yes, I needed help.  I don't know how much I believe in dating sites to begin with given I live in this fantasy land that believes that I need to have an incredible "How I met" story and "Then... he click on me and we just KNEW."  Is *not* the story I was envisioning.  (Surprise. Surprise.)   Then, despite the delight that I am when writing to you, when I start writing a up a profile, and I start being HONEST and GENUINE and ugh, dullsville.  Ironically, I just had a huge discussion with my mother about my fear of being dull and her adamant demand that I start being boring to lower people's expectations - thus relieving my stress levels.  What I'm trying to say here is, I needed Shana's help to make sure I wasn't TOO genuine.  The result of our combined efforts, IMHO, is funny enough to share with all of you.  (Hey, it's a slow news week. Okay?)

The movie I've watched the most times:
Muppet's Christmas (1987)

An awesome place I've visited:
Irish Pub in Russia (when I was 12).

My perfect Sunday:
One that never ends

My life history in 5 sentences or fewer:
Did the growing up thing in NY, then the mastering of rhetoric while damaging my liver thing in PA. I made some games in WA and made some toys in NY and now I'm back in WA workin' for THE man, the gaming man...

And still damaging my liver when the mood strikes. I feel a strike coming on...

My first concert / My dream concert:
Garth Brooks, P!nk, & Steve Martin singing a private concert for me, stopping periodically to ask if I'm enjoying myself.

Obscure knowledge I possess:
How to say "Where are my robot pants?" and "My eyes bleed because of you." in German.

I have a weakness for guys/girls who:
have (fake) accents and talk pretty (funny) to me.

For me, a first date no-no is:
being boring or dumb. Or worse, both.

What I would bring to show and tell:
Brookies

I secretly want to be:
able to laugh WITH people and not AT them.

I want to be with someone who wants to be:
my entertainment committee.

An infatuation of mine:
Stories: Hearing, Telling, Watching & Reading. Oh, and anything with cheese.

If I won the lottery and quit my job, I would:
Buy someecards.com, abuse my new power by finding the name of the funniest male card writer, and marry him.

One thing my mother would want you to know about me:
"She isn't ALWAYS this sarcastic."

I want to come home to:
a dinner plan. seriously. make a plan. 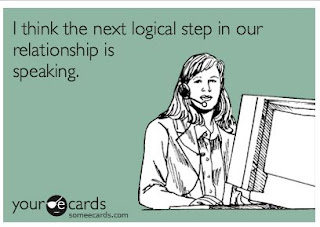 I'll let you know what happens. :P  Oh! A friend from high school, who has 9 month old twins, announced on the Facebook that she's 13 weeks pregnant with twins.  I may have posted in response, "I'm just going to say what everyone is thinking, "Holy Shit."  She mentioned that she and her husband were thinking that people like them got TV shows... which is totally true.  Awesome, sure, but I just keep thinking about how she won't be sleeping for the next 4 years, and it makes me want to hire her 2 nannies so that can have a man to man chance. 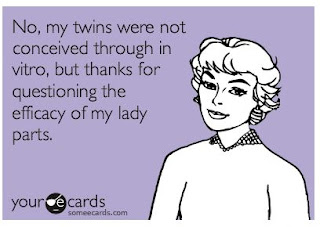 My plans got canceled on Friday, so I might have watched an obscene amount of Felicity.  I had never seen the show, and people kept telling me that I would like it.  I don't know why I like it.  Maybe it's because it happened at the same time I was in college so the same clothing and technology things are happening (though there is a distinct lack of IM in the story lines.)  Or maybe I just really think Scott Foley is adorable, but anyway, by Saturday, I was almost done with the second season.  Lucas sat down to do some homework and he saw me watching it on my iPad and kept saying, "This show sucks." And I said, yeah, I know but let me finish watching this episode and then we can watch something else.  But, when that episode ended, he was like; well we need to find out what happens with "Old Guy" (Scott Foley).  So we watched another, and he continued to pronounce how terrible the show was.  Then after watching three episodes (on my iPad because the TV is broken and we didn't want to walk to the other side of the room) Lucas said, "This is such a bad show.  Let's go watch it on the big screen."  We went up to the theater (which we haven't been up to in two months) to watch Felicity in HD.

Me: Man, this is totally like when Zach and I used to watch really bad TV for hours on end.
Lucas: Zach would never watch this show.
Me: No, I mean this is more like when we watched Smallville, or Merlin.

We watched it until one in the morning, then last night, when Luke said he wanted to watch some TV, and I asked him what he wanted to watch, he said, "Let's go watch that crappy show."  Which we did, and then I would periodically hear, "This show sucks.  I have it on a timer."

Luke and I were marveling about our wireless life.  How we could be watching streaming HD TV never having to get up to even change the channel and we could purchase things on our iPads, and if we wanted to, press print on the receipt and it would start printing downstairs.
Me: And yet we still need to plug things in to charge them.
Luke: Yeah, we should be able to transfer electricity wirelessly....even though technically that's lightening.

(BDug and Ethan decided to tell me about how I could actually charge wirelessly, but that still required me to get up from my recliner, which was not amenable to me (if amenable means agreeable, and in which case, I probably should have just said agreeable.) 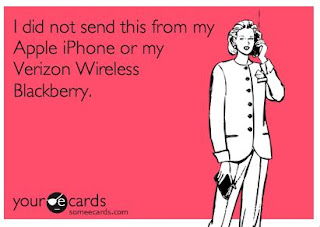 Luke: Man, they really know their customer.  (As we sat down in those recliners, and the cup holders accommodated our large Gatorade beverages.  Mine was the red kind, his was "Toilet Bowl Blue.")

Luke and I periodically purchase Jujubes.  Then we discuss how we love how the very nature of jujubes causes you to really work for your candy so you eat less, but they last ten times longer because that’s how long it takes to chew and remove the jujubes from your teeth.  We opened a new box on Saturday.

Luke:  These jujubes aren't sticking to my teeth! Is it because I just brushed my teeth?
Me: Maybe they are new, and all the other boxes we got had been sitting on the shelf for years.
Luke: No, I'm pretty sure these are a gift from God.
Me: Let me see. (I pour some into my hand.)  I just got all RED! My favorite! This box is a gift from God.
(5 min later.)
Luke: I just got all green!  Gift. From. God.

Luke and I went for a walk and Starbucks Saturday morning.

Luke also took the trucks off his skateboard and attached them to a shoe, effectively re-inventing the single roller skate.  Maybe we were both a lil bored this weekend.

We also made apple crisp because, after 6 years of not having an oven that works (we had gotten to the point where we were using duct tape to keep it closed - but Dawne kept insisting that we never use the oven so therefore we clearly didn't need one. And then Jordan mentioned that we have 40 people over for Thanksgiving every year, and maybe this year we shouldn't Microwave the turkey...) we got a new oven.  I wanted to christen it, so I did.  That is all I have to say about that.

Me: Why don't you look for your phone in the music room?
Lucas: It's a good thing I went down there; Nala was locked in there, in the dark.  That's not good.
(Ten Minutes Later.)
Me: You still haven't found your phone.
Lucas: No... But now, I'm just worried about Nala getting an infection in the music room.

Posted by skcorynaffit at 11:20 AM