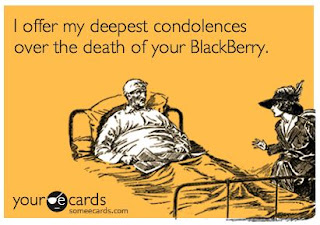 It has been 3 1/2 days since I have had a cell phone.  When I first discovered that my cell phone was no longer functioning (it turns on, so I can see that I have 6 text messages, 10 missed calls I just can’t press any buttons to see who they are from or to answer or make any calls) I actually had to use a pay phone.  A buck 75 later, feeling dirty like I was also going through the trash at the same time, I was finally able to contact my parents.  When I went to Verizon, my dad watched me nearly have a nervous breakdown.  The Verizon guy was all… well you aren’t going to get anything until Monday.  I grabbed the guys arm and looked deep into his eye to say, “Do you have ANY idea the panic that is racing through my body right now? I opted not to spend $90 dollars to replace my blackberry, and just took the plunge and ordered an iPhone.  He then asked, “Do you want to wait until Dec 28th for the white phone?”  I’ll let you imagine the look I gave him, as I said, “Did you not hear about the anxiety the word “Monday” gave me??” (PS, when I asked if they could fix my phone, another gent said, “Oh, you’ve already take the battery out and put it back in? That’s the extent of our tricks.” What?)  We got into the car, and I called Julie’s cell from my dad’s phone because for whatever reason I remember her number.  As I’m telling her that I won’t have a phone for 2 days, I head my dad say, “Um… it’s more like 3 days. “ and then 5 minutes later, “If you want to get technical it’s actually 4 days.”  Easing into it did NOT help, Frita. 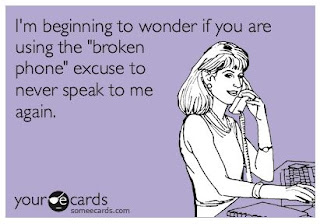 This whole story kinda negates the previous story that I was going to tell about how after making jokes about iPhone’s vs Razors I saw a commercial for the droid razor.  It looked super cool.  Maybe if I hate the iPhone I’ll make the switch.  Don’t worry; you’ll be updated with my every decision.

After we left Verizon, Frita told me that his Uncle Tom was “Jerky Friendly” like my brother Sean.  He then tried to explain that this was an expression that was used all the time, and that naturally, it was a good thing.  He then told me that Uncle Tom would tell this joke all the time about going to a nudist colony and someone asked if there were more men or women at the nudist colony and he would answer, “I couldn’t tell, they weren’t wearing any clothes.”  Frita said that he thought of this story when I was in the Verizon store.  (Naturally.)  When I asked WHY he thought of his “Jerky Friendly Uncle and the Nudist colony joke” my dad just said, you know, because clearly that guy in the store was missing the point.

Maureen ended up having pneumonia and couldn’t talk to me for a couple of days.  When she finally was well enough to chat, I told her that I had called our mother to have her go over and check that Maureen wasn’t moving furniture.  Maureen just laughed and said, “That’s so funny because I actually DID move furniture.”

We finally watched that Spy show last week… and now you can too!

Last week, when it was 32 degrees out, Patrick came out dressed for school with his Christmas socks pulls up halfway between his ankles and knees, wearing shorts and a shirt.  Maureen told him he had to go back into his room and change.  5 minutes later, he had come out wearing a different shirt. 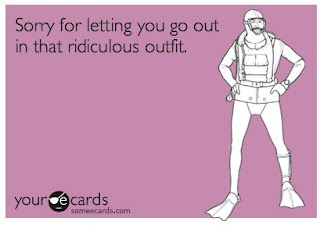 Patrick had asked for Halo stuff for Christmas, so for Kevin’s birthday, I thought he might also want to some Halo stuff.  I got him some mega bloks thinking that who doesn’t love mega bloks.  He opens the first present and says in a most disappointed voice, “Oh.  Halo,” then he went to the next gift.  He did this three times until he got to the Giants scarf and actually liked what I had given him.  When he opened a Pokémon game from my sister he got very excited then looked at me and said, “You could have gotten this for me if you hadn’t QUIT.”   He also got something from my parents that featured King Arthur.  One of his little friends said, “Who is King Arthur?” and Kevin said, “No one you know.”  He also expressed that my parents knew the real King Arthur.  J 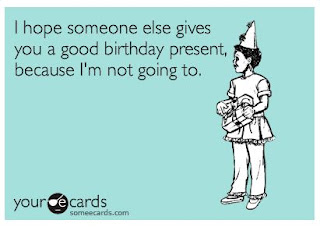 I got to see some amazingly fun people this weekend including 7 of my cousins, 2 friends from college and 4 friends from when I was little.  Not to mention a host of other pretty awesome individuals.  I also ate a lot of my mother’s ham.  A lot.  It was basically a perfect weekend.  Julie got me this EPIC apron that I put on right away… I agree with Julie that the description for this particular apron was screaming my name.

I was explaining about how, while making pea soup a couple of weeks ago, I injured myself.  By cutting 3 carrots, 3 pieces of celery and an onion, I got this HUGE blister on my finger. (I’m very sensitive.) My cousin Katie told me that she didn’t like manual labor either.  In fact, when she was younger, she and her brother Jonathon were supposed trade off and clean the bathroom every other week.  Due to the fact that Katie didn’t want to clean the bathroom, it only got cleaned once every other week by Jonathon.  She did finally try to clean the bathroom, but after 2 minutes, she ended up slicing her finger open with a razor as she was wiping down the shower and successfully got out of ever cleaning the bathroom again.  I think I’ve met my match. 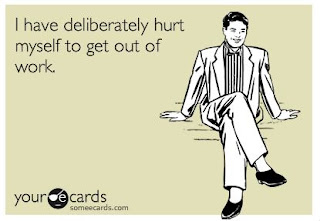 My cousin Jennifer works as an officer in a prison down in Florida.  She was telling us about funny things that they do during down times using the intercom.  I asked her if she also runs through the hallways yelling… I’m freeeeeeeeee! I’m freeeeeee! And also maybe sometimes opens the prison doors saying, go ahead, come on out… really… ha! Ha! Just kidding!  (This is why I’m not allowed to work in a prison and she is.) 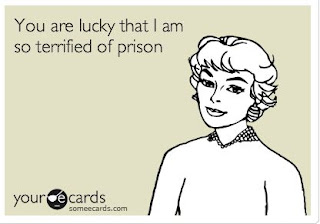 At one point Dara announced that she was leaving with Joe and Christine, while her husband Kenny said that he was staying so he could leave with Ben and Melissa.  Despite her insistence that she wanted to go home, 10 minutes later, we heard Dara.  She had hidden outside and then ran back into the house.  As we were mostly just laughing, but some people were concerned about drinking levels, Dara yelled, “I’m not angry and I’m not throwing up.  Don’t worry.”  Fair enough. 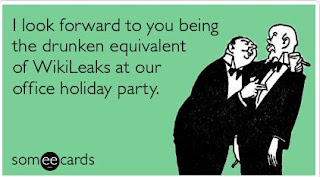 My roommate from college, Julie, is having a baby in April.  Apparently she thinks I have a big mouth and once she told me I would tell everyone, so I didn’t actually have to add “If she tells you, act excited like you heard it for the first time.”  We had been talking about seeing each other around Christmas when, at the very end of an email, she said, “Oh --other things I said I'd update you on-- It’s a girl.”  I just adore you Julie.  J 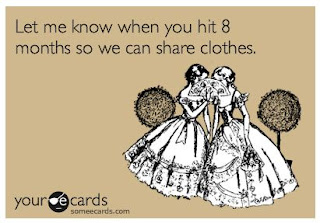 And to get you into the holiday spirit, here is a little Kristin Stewart ridiculousness:

I hope you are all gearing up for a wonderful holiday season, I know I am! 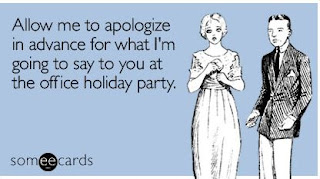 Posted by skcorynaffit at 12:17 PM