Zach: Have you watched Spy?
Me: No.  I'm so sorry. I will though.  I promise.
Zach: Watch all 6 episodes right now and call me back so we can talk about it.
Me: I will watch them, but not right now.  I'm watching "How to Marry a Millionaire" and that's obviously more pressing. 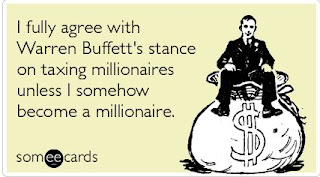 We went to this charity/dueling piano's thing for Dreams for Orphan's last night.  The pianists were very entertaining.  There was even a big battle when someone requested Katy Perry, which the one guy was thrilled to sing, and then this lady kept shutting it down, and the rest of the people were pooling their money to get him to continue singing until Katy Perry ended up making over 200 dollars for the Orphans.  We learned that Dawne had never heard the song, "I touch myself" and she was appalled at the lyrics.  I asked for the Mister Roger's theme song (because it's for the Orphans, and Orphan's love Mr. Rogers.)

Only, he didn't really know that song and it sounded terrible.  During a particularly poignant song, cell phones were raised with their fake lighters until one lady raised an ACTUAL lighter.  Pianist (in the midst of singing) shouted, "Give it up to for the smoker in the first row!" Then, right before we left, Dawne requested "We are the World."   He also did not know this song, and explained that usually he plays to a drunk audience that doesn't really care.  But, for 200 dollars, he was going to give a try.  And he was right; it was awful.  Our table could not stop laughing though because we knew that even though it was terrible, no one was going to give $201 to make the train wreck stop.

Saturday morning, as we were sipping coffee…
Dawne: What are you doing on December 11th?
Me: I don't know... why?
Dawne: I want to take the dogs to the theater.
Me: Naturally.

I packed up the last of the presents that need to be shipped to NY and brought them to the post office.  Lugging the rather large box up to the counter, the postal worker informed me that it would cost $130 dollars to ship this box.  So, I said, "Thanks, but I'll just fly it there myself. Have a great day." And then I proceeded to walk out of the building with my box. 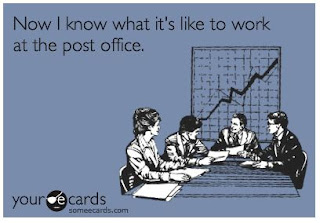 While reading the Bloggess, I discovered "Marcel the Shell with shoes."  If you haven't seen this, you need to.  Now.  I know what I'm talking about.  I watched it 4 times yesterday.

Lucas: Apparently I'm behind all things internet.  I mean I got excited about baby monkey riding a pig which I'm told is as old as the internet.

We headed to brunch before going to the Urban Craft Uprising on Sunday morning.

Lucas: I have the integrity of a brick wall.
Matty: Integrity - or intelligence? 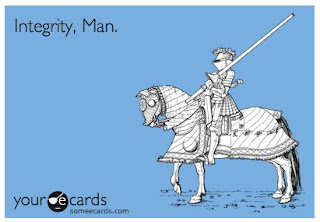 As soon as we got into the Urban Craft Uprising…
Jen (to Lily): Lily.  Don't touch anything.
Less than 60 seconds later
Me: Lily! You can totally touch these.

Overheard at the UCU: Do you know how I'm going to hide this large gift? Inconspicuously.

I was at work when I overheard someone forcefully yet calmly state, "Let me interject.   Are you ready for me to interject?"  I just imagined the person on the other line saying, "Lemme finish."

After one of those pop up toys popped up and flew into the kitchen, I couldn't immediately find it.
Me: I guess it's lost forever.
Lucas: It's under the fridge.
Me: Okay.  I guess it was just lost for a moment.
Lucas: I feel like if you looked up in a thesaurus what the opposite of "forever" is, it would say, "a moment." 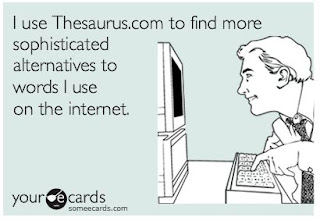 As I mentioned, we started this whole diet thing so that Maureen could breathe.  Unfortunately, despite the fact that the only time I have cheated was an hour on Thanksgiving (and I felt extremely ill afterwards) Maureen still is having trouble breathing.  I know this for sure because:

-She can't seem to talk to me without having to hang up to Nebulize.  Honestly, I'm not able to have a conversation with my sister without giggling the whole time, and apparently it's hard to laugh and breathe.
-Kevin held her hand as she slowly made her way from the parking lot to the field, saying, that it was okay and she could make it.
-Kyle has begun to pray for her.
-She's actually going to the doctor today. 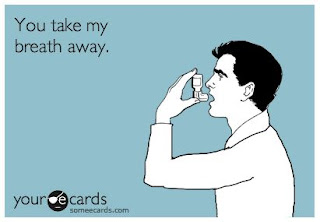 Lots of love and hugs going her way... and I'll try not to call until you med up.

Posted by skcorynaffit at 11:13 AM