Five Minutes On The Clock Please 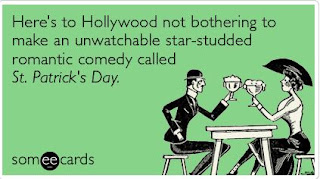 I’m going to try to rally right now.  I went to the doctor early this morning and while they were drawing blood (from my hand because my body likes to make it difficult for anyone trying to steal from it) I not only passed out, apparently I started to seize.  THAT’s a new development. 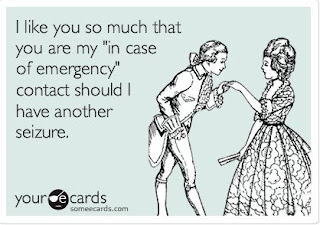 We went to lunch on Monday for Kelly’s birthday and naturally someone started about inventions for gamers (that I’m going to talk about until after we’ve made a prototype and I’ve trademarked the idea. :P) Then someone started talking about the new dorito taco from taco bell, and we lamented that we hadn’t gone there for the special birthday lunch, when Tyler asked, “Wait.  Are these Nacho or Cool Ranch?”  (I still don’t know – maybe for MY birthday.) 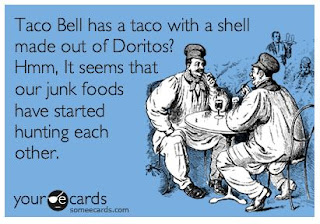 We were at dinner last week when Dawne told us that there was one thing that she would demand that our future mates have.
Me: Is it that they aren’t sterile? Because I don’t know if you can guarantee that.
Dawne: No.  But that’s a good one.  You all have to find someone who is your equal.
Lucas: How am I supposed to find someone who knows that many yo-yo tricks?!
(and later when I told Rach)
Rach: That REALLY sets the bar high for us.
True Story. 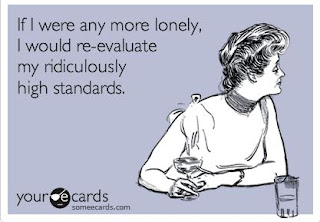 Rach has a new roommate Jason and I asked him what it was like to live with two people who are so neat.  He said he was fine adjusting to whatever level of clean his roommates liked.  They are a no shoe house, so often shoes are placed by the door.  Jason woke up one morning looking for his shoes only to see them lined up on a shelf so he yelled out, “Who OCD’d my SHOES?” 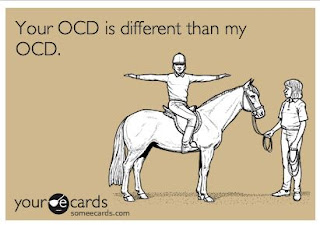 I decided to go out and be social on Thursday instead of making Irish Soda Bread (or Green Muffins.  Remember when I used to bring 8 dozen green muffins into school and they’d be gone by 4th period?) Ultimately, I think it was a good decision.  I hear Sean stayed up until 1 making our grandmother’s recipe – he doesn’t have the social pressure that I do.  Thursday evening I was pretty wrapped up on the work front, waiting for Kelly to finish up, and texting my brother when Tyler said good-bye.  I must have given my “if you’re doing something fun please please please invite me” look, because all of a sudden I was on my way to the bar with him and Nick. 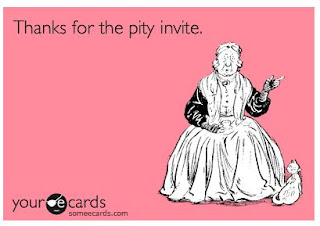 Tyler: Do you want to go down to Central or do you have to pick up a kid at a school.
Me (totally confused): Why would a try to pick up a guy at a school? Gross.  No.  Today is Thursday.  Husband Hunt Day.  I go to a bar for that silly.

I was telling Tyler and Nick that my brother was texting me pictures of his new Guinness tap for “Guinness Season” and how it must have been an odd day because he never lets me talk to him on the commute to and from work.  After chatting away on our walk to the bar, Tyler said, “I can see why he has such a strict policy of not talking.”  Harsh Tyler.  Harsh.  Kelly met us down there, but then I promised to go back to work with her and help her write an email.  (I acted out a scene in which I was pretending to grab a gun and shoot things and I described in detail what I was doing and she wrote it all down.)  FINALLY we were done with work and could meet Rach.  Kelly was telling us about having brunch with an old bo at a restaurant and showed us the exact booth where they once gazed at each other over some eggs and toast.

Rach: Which booth?
Kelly: That one, right there.
Rach: Let’s burn it.

This is what I think of every time I’m with Rach: 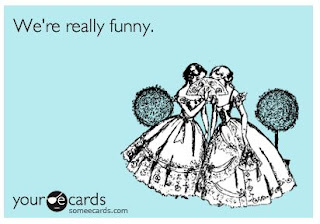 Friday night, I went to see Jordan’s niece Rosie in Oklahoma at the 5th.
Me: I already saw the REAL one.
Dawne: This one will be BETTER.
Me: No. Freakin. Way.

But actually, they did cut out some of the dull parts, and Rosie was captivating and hilarious so, I guess it was worth it.

Saturday morning I met Becky for breakfast and then went over to a friend’s son’s funeral.  When we left there, we went immediately to the Celtic Bayou.

Me: Does this feel weird, ordering Jameson and Guinness?
Becky: People will be like, “Why do you smell like booze?”
Me: Mormon funeral.
Becky: With an Irish friend on St. Patrick’s Day.  Makes perfect sense. 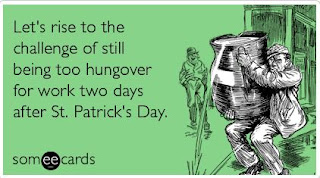 Thus, by 11:30, I was already being mocked but they singer at the mic for drinking Jameson.  Becky says it was actually for NOT drinking Jameson, and I think it’s because I took one sip and said, “Yeah.  I am not drinking that.”  Unfortunately, I had to ditch Becky early because Lucas told me his performance was starting at 1 not 1:30.  I dashed down town, just barely making it to see Allium perform at the EMP.  Then, I ran back to the house to change out of all black and into my St. Patrick’s Day get up.  I told Lucas, that every year I get all excited and St. Patrick’s Day and then I’m totally disappointed because no one else cares like I do.  Anyway, I changed and then picked up Kelly and met Diana, Jason, Lauren and Rach at a St. Patrick’s Day/Sounders tailgate.  As we were looking for parking, a random guy told us to park by the pole.  So we parked by the pole.  Only, I got my white and green shoes, that I only wear once a year, dirty.  L But we DID get to park near a pole.

Rach: I was walking down the street when some guy asked me if I wanted to buy his hip hop album.  He didn’t ask anyone else.  That’s when I knew that I was really pulling off this hat.  I also wore this Sounders shirt this morning during the race and I didn’t wash it before I put it back on.  Don’t worry, it was a short race and I used Fabreeze. 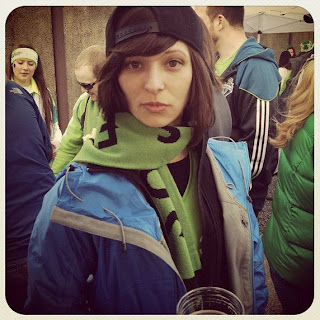 Kelly: Did you see this picture I took of Chris Harrison?
Me: Yes, three times.
Rach: Who?
Kelly (showing the picture.): Chris Harrison from work.
Rach: Oh.  I thought you said, JEFF Harrison.  I’m not interested any more.
(Names changed for funsies.)

We had someone take a picture of us, but then someone photo bombed the picture, so Kelly pointed out to him that his cameo featured significant snot – gross, guy.  gross and now embarrassed. 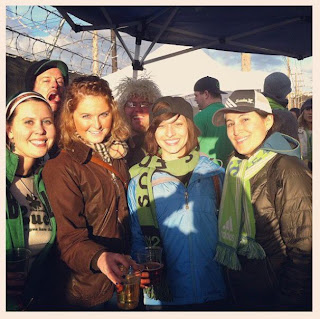 As we were leaving the tailgate of food, green beer, and multi-colored jello shots, back to the car parked by the pole, Kelly said, “I’m pretty drunk. I didn't think this was going to happen again today.”  When we got to the car, I didn’t want to get muddy again, so Kelly MacGyver’ed the situation for me. 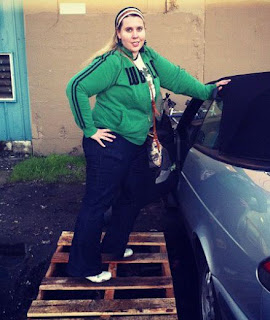 Then we met up with a guy from work at Fado’s, and Irish bar on 1st.  There, you could hang outside, in the “beer garden” for free or go inside the bar.  We eventually went in, then came back outside so we could hear each other.  Our co-worker’s dad was in town from Boston – and the co-worker grew up in Connecticut – anyway, turns out the dad went to Lakeland.  The same high school I went to.  What are the chances?  He didn’t believe me either.  But I didn’t really believe him b/c he grew up in Peekskill, but I guess that was before Panas even existed.  Weird.    Anyway, Kelly and I tried to get back into the bar, and the bouncers stopped us.  We said we would be right back out, we just needed to use the restroom, and they were like. NO.  FIVE MINUTES.  That’s when Kelly proceeded to put a 5 minute timer on her phone and hold it up in his face.  When someone else asked to go in, the other bouncer glanced at Kelly’s timer and said, 2 minutes.  When we finally got into the bar Kelly said, “Boy. That timer really pissed off the guy with the gold tooth.” 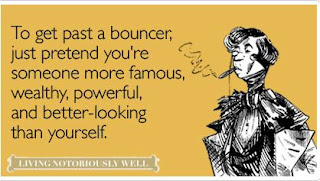 Later, we met up with Diana, Jason and Rach at Sluggers, which is appropriately named, I suppose, because a heated conversation broke out between Jason and the bartender.  While that was going on, Rach whispered to me, “I'm just saying if we're starting a brawl I'm freakin IN.”  There was also a situation with some French fries, but mostly the bartender should not work on St. Patrick’s Day, or in a bar, if she doesn’t like drunk people, IMHO.

Sunday, I slept in, and then proceeded to sit in the kitchen all day working on some Wikipedia entries and playing Draw Something (I really can’t get enough of this game!!)  I also went to the grocery store with Lucas on Sunday, and he picked up this pinwheel I had in the car and was playing with it by spinning it, and I said, “Oh yeah.  That’s from the funeral.”  Lucas: Way to take the fun out of it, Tiffany.  I didn’t mean to… I was just trying to add another layer to the action.  I was about to head over to Laina’s for a pot luck when Casper came to say good-bye to me.  I put my phone on the banister so I wouldn’t drop it, when it slipped off the banister and shattered.  I showed Rach at the party.

Me: I put a case on is so that I wouldn’t cut myself, see.
Rach (running her finger along the glass the whole way and then holding up her finger to me): Aww I got glass splinters.
Aimee: Some of us learn by doing.
Kava (Laina’s friend): Did I hear you’re a doctor?

Serious props to Shana who made a delicious cake—and when it didn’t come out of the pan properly, made a switcheroo by breaking up the cake and serving it in a cool bowl: 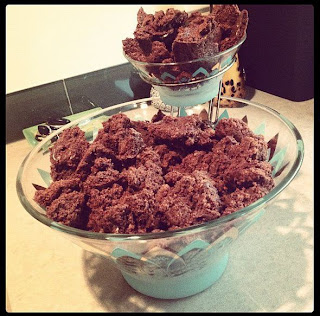 Okay, that’s about all there is for me today.  I hope you had a wonderful St. Patrick’s Day!!