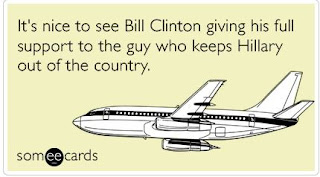 Last week was work-intense busy which makes these updates a little less interesting.  Also, the third season of White Collar was on Netflix, so Luke and I might have gotten sucked into that when I wasn't working late.  There was an opportunity to see The Princess Bride outside in the park, but I couldn't make it and Lucas said that he had, "Seen that movie more times than Charlie Sheen had said Winning."  So I guess, he was opting out. 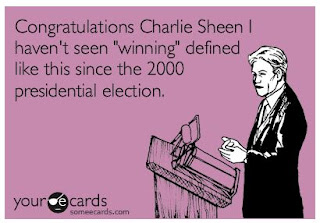 I tried to get a game of Kickball going at work, but had to cancel do to actual work.  However, before I canceled, Christy, a co-worker told me "I can't play kickball because I have a cracked rib. But I still want to come. I will wear knee socks and short shorts and just do some stretching on the sidelines."  That's my favorite kind of participation! 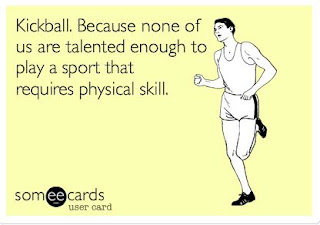 On Thursday night, I went to a party.  This party required me to verify that I knew someone, show that I worked somewhere cool (read geeky), then be sent an invitation to register, then bring confirmation ticket with photo ID.  When we got there, it was a warehouse, which had potential for fun, but ultimately ended up being one long line for booze - red solo cup in hand.  Shana left early with friends to a bar(My cousin Raymond came up to give Shana a hug, but because her friends didn't know him, they instantly got defensive like, "whoa - do you know this guy? Do we need to rough him up?"), and then I ushered my friends out to another bar where I was handed a drink that was four different colors - and was gineriffic. 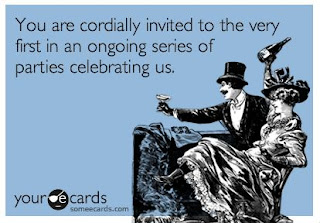 Wait, back up.  Before we went to the party, my co-workers went to Zeeks for dinner.  We got some extra dough to play with.  Kelly ultimately made hers into accessories: 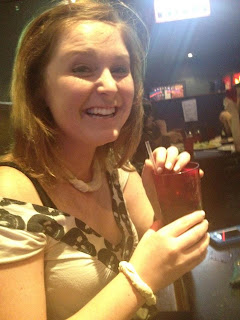 Angel: What if they start falling off at the party?
Me: Just roll with it.

In reference to whether or not someone was worth talking to, my co-worker responded with, "I can't look at her face so I don't know." 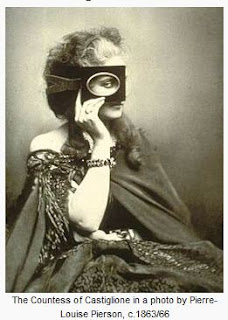 At the bar, Kelly wanted two of our co-workers to show off their chest hair.  One gentleman announced he was proud of his Italian heritage.
Co-worker: Me Great Great Grandmother was one of the most expensive prostitutes in history.  The Countess Nicchia de Castiglione.
Co-worker 2: My Great Great Grandfather was keeper of Robert the Bruce's heart.
Co-worker: Yes, but my grandmother was Courtesan to Napoleon III.
Co-worker 2: She carried a heart! She was the keeper of the heart!
Co-worker: Nicchia was a media sensation!  She had an exhibit in the Met!
Me: How did we get here from chest hair?
Co-worker:  I was proving how Italian I am - in fact, I have a Pope in my family.
Me: How does that make you more Italian?
Co-worker: Where is the Vatican?
Me: Vatican City.
Co-worker: Which is in....?
Me: Vatican City.  It's its own country, and you don't need to be Italian to be Pope.
Co-Worker: This pope was.  :)
I hear I might even be able to see a book on this infamous grandma prostitute.  (I hear she use to show off her feet.  SCANDALOUS!) 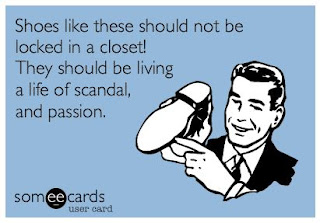 Friday night I was totally lame and sleepy.  Which was fine, because there were work people at the house, so I helped entertain by eating steak and drinking wine.  Saturday, a "Road-tripping with Rach" day.  Dawne, Dr, Rach and I started the day with brunch at Original Pancake House, followed by going up to the outlet malls in Tulalip (I kindly ask that you never request that I say that word out loud. It's like asking a 3 year old to say Osh Kosh B'Gosh.)

Me: So my mom saw pictures of Jordan's family reunion and said, "Boy, that Lucas is one good looking kid."  And I said to her, "Mom! Did you just pick out the one kid that looks the most like you and say he's gorgeous?"
Dawne: That's true on both accounts.

Dawne:  Lucas is going out for Crew.  I told him that if he starts out as the worst one he'll have room to grow.
Me: I was always the worst one on all of my teams.  It was fun.  I was a really good cheerleader from the bench.
Dawne:  It builds character.
Me: I don't know about that.
Dawne: Are you kidding me?  You have more character than anyone I know. 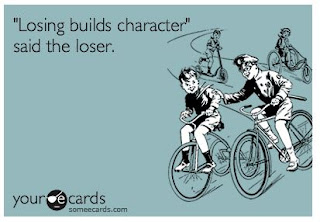 After lots of shopping, we ended up not making to Bellingham, as intended because we wanted to get back in time to go to the Rodeo at the Evergreen Fair in Monroe.  We were invited by Kelly, and technically, she was watching the same rodeo, but we never saw her.  That's what texting is for!  I had never seen a Rodeo, so I was pretty excited.  I tried to take a picture but they were so fast! 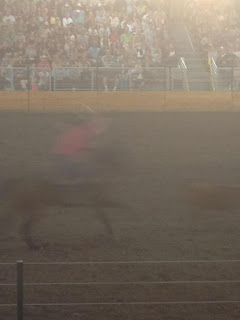 We left the rodeo after an hour.   There were these hamster balls outside that Dawne said she HAD to go in, which meant we also HAD to go in. 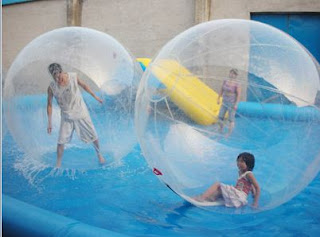 Then we ate some dinner and headed to check out the animals including the bunnies. 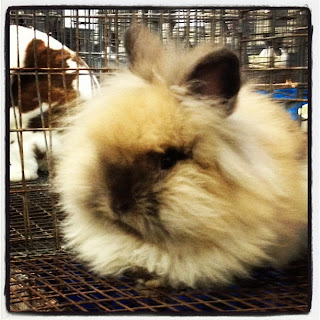 Dawne: I can't breathe, do you have any Benadryl?
Me: Yes.  Dawne!  You should have said something.
Dawne: I'm really allergic to bunnies.
Dr. Rach: Then why are we in here?
Dawne: Because they're cute. 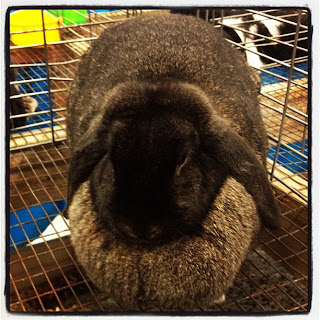 Bit of a double chin, there buddy.

When we left, Stella was trying to hide behind a garbage can and doing a fine job of it: 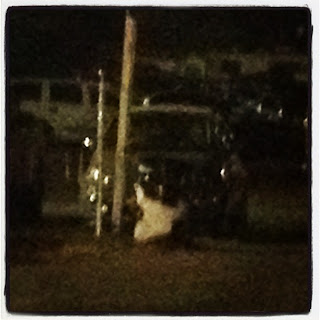 On Sunday, I put workout clothes on (step one of actually working out.)  After drinking coffee and watching TV in my workout clothes, I then showered and met Shana and Michael for brunch in West Seattle.  We followed that up with more coffee and shopping.   After seeing super cute baby shoes, I emailed my cousin to say, "What type of baby are you having?"  I thought it was a reasonable question.  I  also found a movie candle that smells like red carpet and popcorn that I had to get for Jordan because he's the only one I know with a theater that demanded a candle such as this.  (There was also a candle that smelled like fresh cut grass, that I totes would have gotten for Maureen if she had any sense of smell.)

Sunday, basically, the last day of summer, I did more shopping at Bell Square, freaked out about a work disaster, then hung out in the pool with Shane, Cathy and Fynn.   Not a bad way to round out the long weekend. 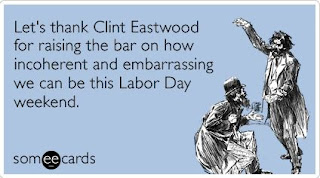 And finally, this happened this week, not last week - but since this was a light week, I thought I would share.
My parents were watching the boys yesterday when Donavan (Doreen's 7 year old) ran to tell my mom that Kyle (Maureen's 7 year old) called him a Smart Ass.  When asked why he did this he explained, "Donavan told me that human beings only exist because of God, and I told him that some human beings came from Gorilla's, and when he disagreed - I called him a smart ass." If I had a dollar for every time I got called a smart ass while in a discussion about evolution, I would be RICH! 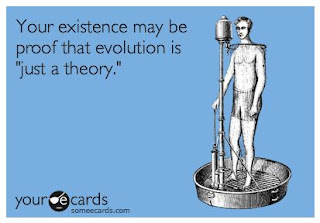 Posted by skcorynaffit at 12:30 PM