B side of Taylor Swifts Album 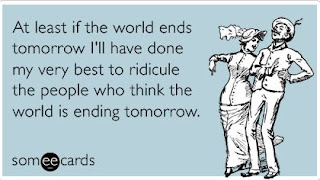 Last week was a rush of trying to get everything done before Dawne and Jordan left for Germany.  Thus, Monday was my annual anxiously checking to see if gifts are going to arrive on time for Christmas.  It's SUPER fun.   While D & J are in Germany, I've had three pups to hang out with - so instead of waking up 4 times with Percy, I was up 6 times because apparently they are on different schedules.   The saddest part of this is I think I'm actually getting used to it.

This is what Percy looks like when he wakes me up: 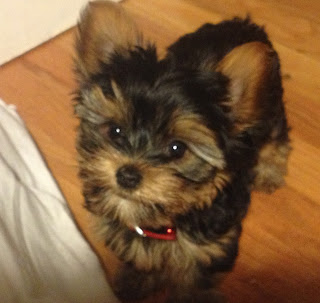 Me to Nala: Your inability to bring me the ball is hindering my ability to play with you.
Zach: I thought you were going to say, "to love you." 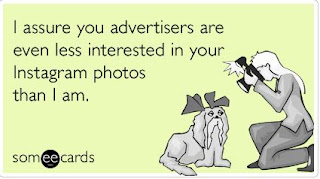 I brought Percy to work with me last week.  It's not really something that is allowed, so I just wanted to test it out.  About 30 minutes before I was about to leave I decided he needed a bath before I introduced him to anyone.  Not necessarily because he was "dirty" but because the natural reaction for every person who picks Percy up is to cuddle him up to their face while placing their nose deep in his fur.  The courteous thing to do would be to make sure he smells like strawberry when they do that.  Have I mentioned how much he loathes bathing? When I bathe and when he does - not a fan.  When I got to work, trying to be very stealth, the first thing my former boss said was, "You got a puppy in that bag?"  Percy was happy to sleep away the day without bothering anyone - but when I took him to our team meeting, everyone wanted to hold him so he was on the table running around.  He did this until he found me, and then I put him on the ground and he went back to sleep.  I had a co-worker watch him during another meeting - very low key.  I put him in his back on a chair next to her.  All was going well, until he sneezed and everyone oooed and aaahhed and had to cuddle. Other than that - he slept and no one noticed him.  Mission Office Pup: SUCCESS! 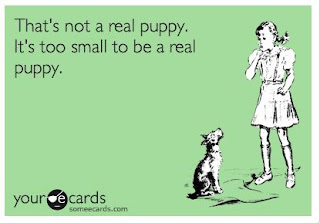 Me: Janette is getting married!
Maureen: To New Balance?
Me: YES!

(At least three years ago - maybe longer, Janette said she wanted to get a personalized present for Neville.  Maureen suggested she get him a pair of New Balance sneakers, because then he would have his initials on the shoes - personalized, JUST FOR HIM.)

Becky to a friend: I danced all night and now I feel like I'm falling apart.
Friend: You're getting old.
Becky: They say 30 is the new 70.
Friend: Really? They 're saying that?
Jared: Only if "they" is Tiffany.

On Saturday morning Luke and I met up with Matty for brunch in Fremont at Roxy's.

Lucas: Matty just wrote back TTYS? What does that mean?
Me: Talk to you soon.
Lucas: Oh I don't know these codes you have because I never grew up having to press numbers for letters. JK.
Me: JK!? 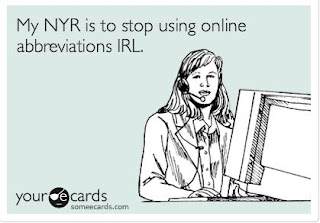 Matty: How are your bros?
Lucas: My bros? Oh you mean my actual bros because my "bros" would be a long  list.  Actually just two more.

We went to the antique store and as we were leaving, Lucas says to me, "My house is going to look like this. It's going to be awful." 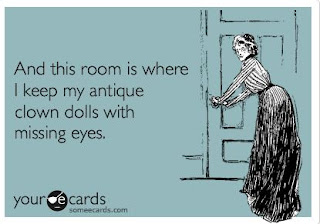 Sunday evening, I took the van to bring Lucas and Arda to a gig.  It was a frightening evening.  First, the van has become a death trap.  I couldn't see out of any of the windows, except the dash.  The mirrors were totally inoperable and useless.  And on top of that, it was pouring out.  When I got to Arda's steep driveway, I tried to back up to the garage for easy load in.  The van was not pleased with this action, plus, I was so scared the breaks would fail, that I stayed in the car with my foot on the break.  When we actually got to El Corazon, a bar under the overpass of I-5 in Seattle, I had Lucas get out so he could help me back up into the space.  We were 5 min early, so the boys couldn't load in.

Lucas: This place is so scary.
Arda: I only want to play happy places.
Lucas: Not ones with bats on the sign.

While we waited, Arda made some calls to the other band members.

Lucas: I wonder if they are letting people in.
Arda:  They probably signal that with a gunshot.

Eventually, the boys were allowed in to set up etc.  I had to stay in the car, so I texted my fear to Matty to see if he would consider coming early to keep me company.  And he did. :)  The show went well, in that there were a lot of people and they enjoyed the performance.  Not great in that the people at the venue hated teenagers and were very surly.  I thought at one point the bouncers were going to bounce Allium right off the stage.   (Here is Allium's (Luke's band) ep: http://allium.bandcamp.com/_ )

After one song, Arda jokingly said, "That was from the B side of Taylor Swifts never getting back together album."  To which I turned to Matty and said, "B side. They don't know what that means." 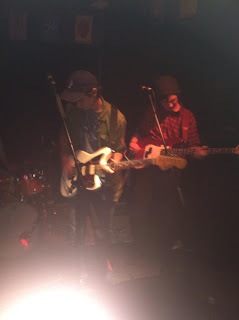 Finally, as we were loading back into the death trap van, Matty said, "Microsoft Store bag holding the band gear.  How very Bellevue-suburban rock."

Laina, Dr. Rach and I went to see ELF the musical on Thursday.  It was awful.  The whole time I was just wishing I was home watching the movie.  Speaking of movies, last week was pretty rough with a roller coaster of emotions between being super excited for friends getting engaged (CONGRATULATIONS EVIVOVA!!) and just way too much news of death.  Not knowing what to do with myself, I was so happy to have Luke around to distract me with Christmas movies and How I Met Your Mother. 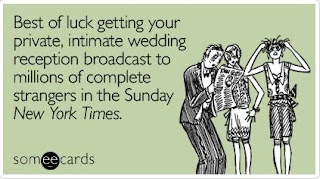 Extra special warm fuzzy feelings to Kristy Kreme and my big brother Sean for their Birthday on Sunday! 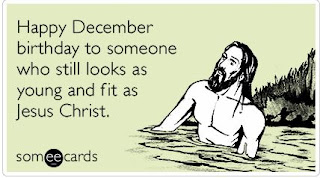 And to all of the rest of you... Merry Christmas, Happy Chanukah, and Have a super NEW YEAR! 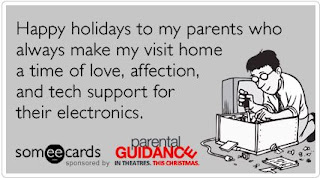 Posted by skcorynaffit at 11:52 AM