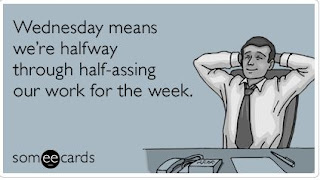 Last week could be summarized by saying that Dawne and I tried to keep Percy away from Nala (he had an Oedipus complex happening all week - VERY focused) then we rounded out the week with our birthday's.  The end.  I *do* have a couple more details, though, if you're interested.

(Lucas has made me very self-conscious about my use of the word "though" saying that the word is never necessary, thus American's over use it on a daily basis.  I just can't stop using it [though!] ) 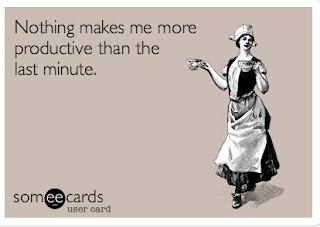 Lucas told Dawne that he wanted to put a skateboarding ramp in the basement to which she immediately said, "No." Never having heard this word from his mother he said, "Maybe you didn't understand what I said." Then he proceeded to show her pictures, and video's after every time she said, "No."  Undeterred, he found another location for his ramp which was built this weekend and is currently in the garage but will eventually find its way outside under the deck. The Micro Mini Quarter Pipe: 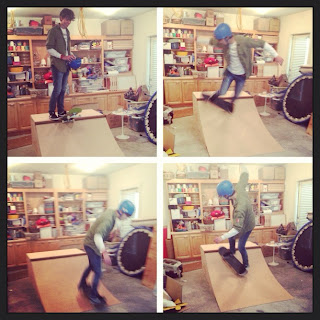 While we were in the Home Depot parking lot we saw Jordan talking to a guy with a little boy in his cart.
Dawne: What did you say to him?
Jordan:  I just asked in what aisle he got the cute guy in the poncho.
Lucas: Did he say in the gardening section near the gnomes?
Jordan: No, he said, "returns." 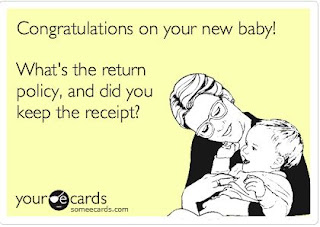 A lot of people have been sick at work both last week and this.
Me:  Stomach flu is the worst.
Ryan: There's no such thing as a stomach flu.  If you're getting sick like that it's probably food poisoning.
Me: Clearly you've never hung out with my nieces and nephews before.  It might be called the "flu".  I'm willing to call it "vomit day" if that makes you feel better, but it was definitely not food poisoning. 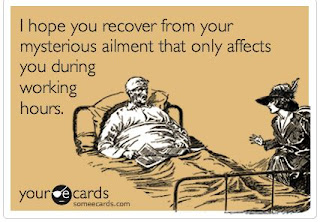 On Friday, Becky, Dawne and new friend Amy, went to Paintings and Pairings.  Amy is my co-workers wife and from the couple of times that I've met her, or heard stories about her, I decided that we should be friends.  For example, she bought a bunch of frames, stuck random pictures into them, and put them on their mantle.  Then, when her in-laws came over, she told them they were of her family. "Oh yeah! That's Uncle Fred and that there is my niece Wanda."  It's been years now, and Tyler's parents still think those are pictures of her family.  Anyway, I haven't decided I wanted to make a new friend in a while, so I was a little nervous.  I figured that she fb friended me, which was the first step.  I told Tyler I was going to ask her to hang out and he just said, "If you convince her to get a Percy dog, I'll never forgive you."  Like I would.  :P  So I asked, she accepted and when I told my other co-worker Christy that I was hanging out with Amy she was all, "How did you ask? What did she say? Tell me everything!"

So, Friday, we all go to Paintings and Pairings.  Becky made me this pretty epic birthday crown (at one point someone asked me what the sign said, and I looked behind me for a sign forgetting that I was wearing a crown that had a sign on it.  Doh.)   There were these 40-45 year old women also at P&P that arrived wasted.  We had two of the Kirkland Cougars at our table and seriously, they made Becky and I look TAME (not an easy feat.)  I thought they were awesome, even when the one chick was just walking around with a bottle of wine judging everyone else's work.  Dawne & Amy, who are actual artists, didn't really appreciate their lack of dedication.  At one point the lady said, "I'm pretty sure I'm going to keep adding paint until it looks like that Orca up there!" (We were making flowers, so all of us thought she said Orchid at first but then looked up to see the while on the wall.)   I personally flipped by canvas 90 degrees with every color that I applied so maybe I wasn't taking it as seriously as I could have.  Here are our master pieces: 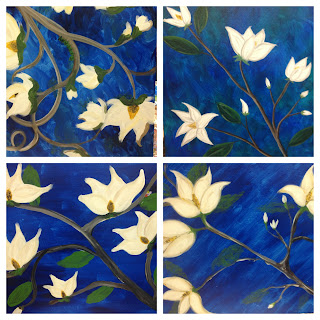 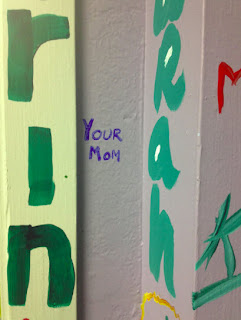 Stacey hooked me up with pictures from Easter (Thanks Stace!)  The chick costume was clearly a little big. 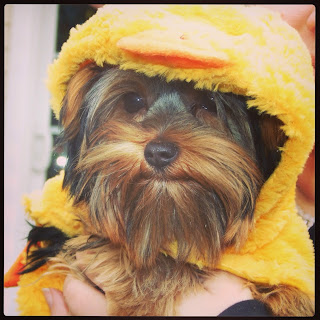 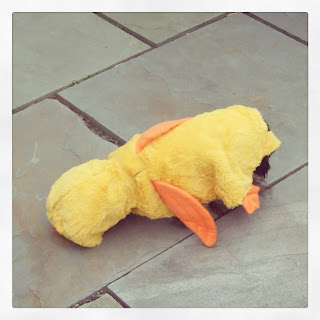 When Becky was younger, her parents believed in having pets that they could also eat.  Hearing "Is this Chicken Little? She tastes great!"  They realized that maybe things had gone awry when Becky's little sister asked, "When are we going to eat Sam [their dog]?"

Mo's BFF Do had been living down the street with her parents for a bit.  Not a week after they moved into their new house, Do's kids asked, "When are we going to have a sleepover at Nana and Pop Pop's?"  To which she said, "Maybe we could finish unpacking here before we go back and mess up the beds again."

On Sunday, Percy had no regard for my birthday, waking me up way before I was ready (or maybe he was so excited that he wanted me to enjoy every WAKING moment of my birthday?)  D&J brought me a chocolate croissant and coffee, and I got to hang out talking on the phone for most of the day.  We then headed over to K9 Fun Zone where we had the pups run the agility course.  There were some things that Percy didn't want to do right away like the tunnel.  I paused for a moment to watch Casper do something cool.  This was when Percy, knowing I still had treats, looked at me like, "What do I need to do to get those treats?"  Then went through the tunnel and came back like, "Do I get a treat for that?"  He did this for many of the tricks which was kinda awesome.  When he started getting tired, Dawne picked up Nala and, being VERY focused on her this week, Percy ran around doing every obstacle because Dawne was carrying Nala above all of the obstacles.  All in all, an excellent first agility day.

After that, we met friends, fam & there furry buds over at Norm's Eatery in Fremont (the bar that allows dogs.)  It was pretty crowded, but also awesome.  When Nala jumped down from the booth and Percy ran after her, as I was picking him up, Becky said, "Leave room for the Holy Spirit!"   Both Dawne and I got some really fun presents, but one of the silliest was Unicorn horns for the pups. 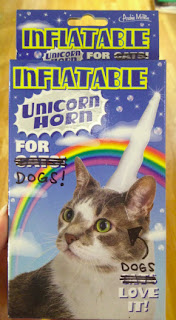 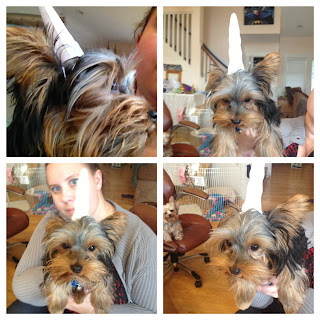 On our way home for Dawne's birthday dinner Lucas said, "You might remember this classic from the slow motion, ass-slapping scene from dazed and confused" before playing "No More Mr Nice Guy." 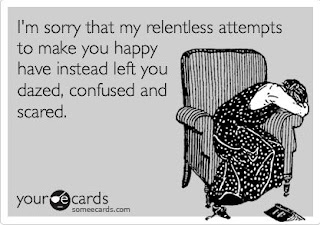