Our Lady of Ossining


Nater was back from Chicago for spring break last week.   Such an impressive gent - he's been writing for the school paper and has become quite the political voice.  Here's a random story that he wrote: http://www.depauliaonline.com/opinions/filibuster-needs-to-be-silenced-in-senate-1.2997936#.UVx4CJOsiSp

Last week Lucas and Dawne were going "back to their roots" and doing the whole unleavened bread for Passover.
Lucas: I've been pretty good.  I had some chicken nuggets - but that doesn't count.
Dawne was doing much better, but insisted that she was just being supportive seeing as her Catholic roots haven't participated in the whole Passover thing since... well I think it started headed south after the Last Supper. 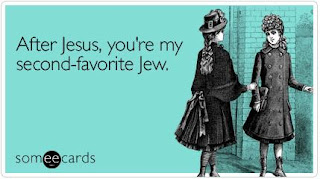 Flew to NY on Thursday.  I had every intention of working for all 5 hours, but it was too stuffy on the plane and Percy refused to stay in his bag preferring the tray table or my shoulder instead.  This was fine until he woke up and jumped on the sleeping gentleman next to me... whoopsadaisy! I ended up having to work most of Friday, but was able to take a break a little Canasta and visit with Mo and Robin. 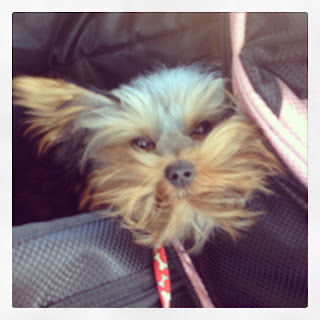 Oh! I'm not sure if I told you about the ten pound package I sent to my parents that I got charged $675 dollars for... but I DID get that resolved to my satisfaction.  Yay.

Kevin gave me a special birthday present: an "I Love My Godmother" mug.  When I opened it he said, "Open it up! You have to look at what it says inside!" When I did, I saw one word, "Always."  Love that kid!

Saturday, Mo had her annual egg decorating party.  We took some time to have a mini-shower for Eva in which we gave her everything that she needed to entertain her baby.  Also, the fortune teller onsie revealed that Eva and Joe are having... drum roll please... a CRIMINAL MASTERMIND. :) 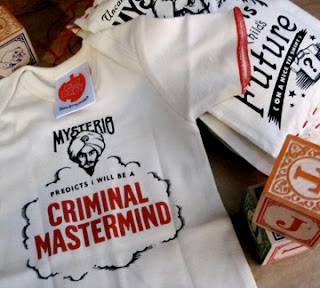 Evivova:  My friend from college is also having a boy at the same time I am.  She's already finished the baby room and the theme is: Broadway Glam.
Briana:  So Deb was pregnant last year at this party, Eva is pregnant this year, who's next?
Me: Pretty sure it's going to be you.
Briana: Well, if it is me, I'm putting those strips on my registry that test your breast milk for alcohol.
This is the same girl who wanted $25 dollar gift cards to Home Depot for her Bridal Shower - so practical.  And like the gift cards, I'll be happy to get those for her.  :)

At one point Dara parked her car, quickly and at an angle, in Mo’s parking lot, then came out, carrying a wine bottle yelling, “Are any of my kids here?”  (They weren’t.)  We might have called her white trash at this point – well I didn’t, because I don’t know what my future will bring. 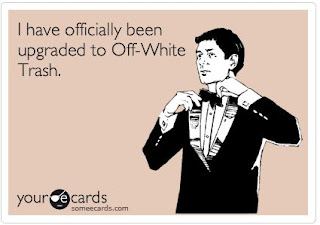 Lisa:  When I texted “The twins were born!” I got a text back from Dara saying, “Who is this?”
Dara:  How was I supposed to know?
Lisa: We called each other all the time when we had season tickets to the Yankees.
Me:  And how many people do you know that are giving birth to twins?!

I don't know what made Percy decide at one point to just jump down and hang out with Bella.  He must have just known that she was calm enough for him.  Bella still wanted to play, however, so there was a lot of this going on: 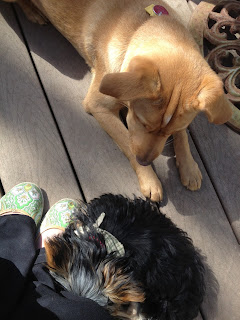 Saturday evening I headed over to Sean's for Bailey's 15th birthday.  We decorated more eggs.  Pete and Marina (you may remember them from Oktoberfest 2011) were in town.  Marina is Brazilian and has never decorated eggs for Easter.  Who better than Sean to show her how it's done.  :) 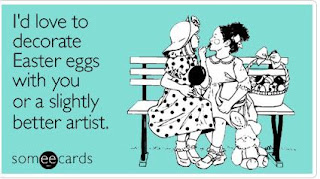 Jackie: Is this Christmas Music?
Stacey: No.  It's Nat King Cole - give it a little bit though, he does have a Christmas song on here...

Morgan:  Like a napkin.  A napkin that you throw in the trash and it gets all of the other trash on it.
I honestly, have no idea what this was in response to.  I didn't even know this information when she said it, but it caused her to fall into a fit of giggles for a good five minutes.

I also had the pleasure of viewing some video's that my nieces made when they were 5 & 8.  They would probably be on youtube now if they hadn't repeated their home phone number throughout.   It starts out with Morgan saying "I am just a little girl, as you can see." Then she turns around for a moment, then turns back with fake breasts and says, "But now I'm a WOMAN." And then you can hear Jackie say that you too can have this great bod by calling 1 800 Boobs, or their home number.    They also point out the deluxe package by holding up the scoop parts of the plastic ice cream scoops that they have from their play set.  Classic.

Carla, Stacey's sister, was telling me that she was going to renew her lease on her apartment.
Jackie: Is your roommate still walking around naked?
Carla: Well, she tries to follow the apartment rules, but she doesn't like it.
Me: You have rules in your apartment?
Carla:  Just the one, you have to at a minimum wear your underwear in the common rooms.  She's working on it. 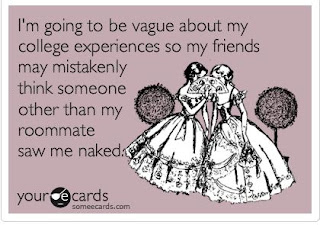 I got Bails the Harry Potter movie scripts for her birthday.
Bails:  It says that you shouldn't open them.  Can I not open them?
Me: Only if you plan on reselling them.  Do you?
Bails: No.  (But then she immediately brought them upstairs to her room so that no one could touch them.)


On Sunday, I found my Easter basket, and then we all went to church.
Sean:  I wonder if anyone volunteers for the choir just so that they have a guaranteed seat.
Me: Did the priest just say "Our Lady of Ossining"?
Frita: What?  You don't like that he just decided that he had the power to anoint sainthoods? 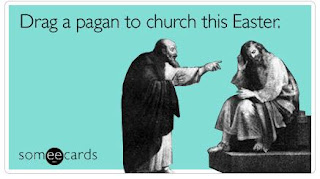 For Jackie's birthday, I got her Brass Cymbal's (to be used in the morning when the sound is the sweetest), finger cymbals, a belly dancing belt and... oh yeah, two racks of Ribs.  Random? Yes.  But I couldn't think of anything more perfect for Jackie O.  She was pretty stoked about being able to have ribs on Monday - AKA Pasta night.  She was opening up on of her other gifts when she announced, "Adorbs! That how you say adorable in Jackie." 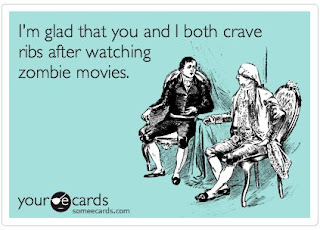 I can't even tell you how perfect Easter was.  My sister-in-law Stacy made an AMAZING dinner, and everyone was just happy to be together.  Well, except for maybe Suki, who did not appreciate another pup being around.  Good think Percy is faster.  I did have an outfit for Percy - but Stacey took that pic so I don't have it for you.   I do have one picture of 4 ladies celebrating, though: 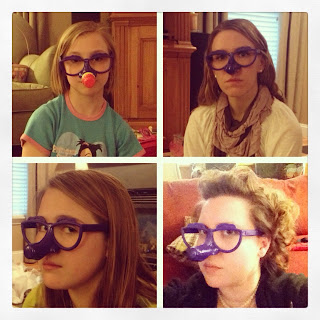 I made my mom watch Hop on Sunday night while I got some work done.  *I* loved it.   While we were watching the news on Monday:

I hope you guys had a terrific week and I'll try to get the next update out closer to being on time next week.  :) 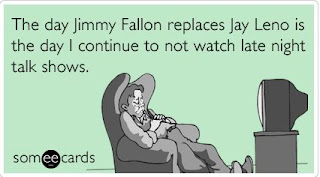