I did Yoga once in college, and afterwards, my friend told me to never ever do it again.  Ten years later, I decided to jump right into Hot Yoga, not just beginner's Hot Yoga, but POWER Yoga, with a really difficult instructor.  The office has been on a health kick, and I though, hey, I can handle one hour during lunch.  I probably should have hydrated beforehand, because I didn't sweat all that much, and I felt a little dizzy and nauseous.  The good news is I stayed the whole time, and did at least 30% of the workout.  There were some sweaty folks around me which reminded me of this:

My friend bought her fiancé a book on sex positions as a gift for their wedding night. Sort of funny but also possibly informative! On Wednesday morning, as she was taking it out of her purse and rushing out the door to work, she set it on her dining table & thought, "Good thing my mom isn't coming over because she doesn't need so see that her sweet daughter has a book called the bible of sex positions."  Fast forward.... Her mom calls and wants to know if she can let herself into my friend's house to drop off her new version of her will and leave it on the dining table for my friend (never mind the fact that they were going to dinner together!) She said sure and then when she got home she saw this: 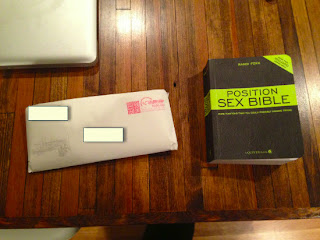 Still giggling and dying of embarrassment, my friend calls her mom and explains the book.  Her mother responded with, "Oh! I just saw the word bible and thought it was cool that you were reading it!"

I asked some friends if they had an old Razor phone (from AT&T) for my uncle.  These are the helpful responses that I received:
Laina: I don't.  I was never razor cool.  I was kickin' it with a blackberry.
Rach: My dad is still using it for his primary means of communication.
Laina: Wasn't it RAZR?
Shana: I have a pink Verizon one.  Soooo sad that it's not AT&T, since the image of Ray with a pink phone pleases me.
Shane: I had a Nokia and taped a Gillette razor to it... it wasn't as slick but I would have every time I answered the phone.
Jen: And keeping it in your front pocket kept you thoroughly man-scaped.
Shana: I would leave it on vibrate with for that... It's the same way we circumcised Fynn.
Jen: Oh man I miss you Shane.  And the way you leap over that line.
Shana: Pole vault more like it! (With style and grace.)
This quickly led to making plans for a monthly brunch and Jen volunteering me to host the first occasion.  And Laina warning us that She and Mo might not be able to make it because he was just getting back form training.
Jen:  Laina, when does Mo come home?  Do you plan on having trouble walking that day?
Laina: 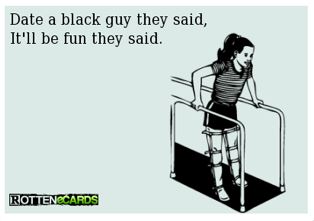 25 minutes later
Jen: Really? Infant circumcision by cellphone razor and *this* is what clears the room?  For shame.
Laina: Sorry Jen - we've all been on a new thread talking about a parenting intervention with Shane & Cathy.  I'll add you now.  But to bring you up to speed, it'll happen at one of our brunches.

Meanwhile, I was doing a practice SAT essay with Lucas, and not feeling any better about my essay writing skills.

Later I received this text from Dr. Rach:
This just happened:
Rach: Ok, I'm officially putting it on my calendar for Sunday... Brunch at Tiff's
Anders:  Don't you mean Breakfast at Tiffany's?

Oddly enough, I did think about writing "Brunch at Tiffany's" but then remembered that was a pornographic film that was available at Video Source where I worked in high school.  Still, clearly a missed opportunity. 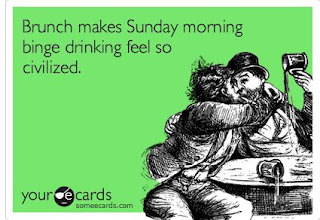 On Thursday, I went to Happy Hour with some folks from work with surprise guests, Dr. Rach and Becky.  When we went to pay our bills, I just grabbed Rach's check as well so that I could use my card.  In turn, Dr. Rach fished some change out of her wallet and handed it to me.  I dropped one of the penny's on the floor and it landed heads down.  I then said, far too loudly, "I'll just put this bad luck penny in Tip Jar."  This was promptly followed by adding good luck money to make up for it. 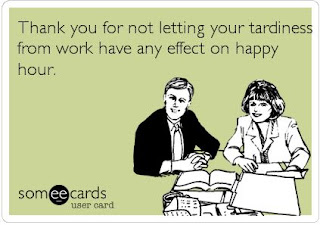 After Happy Hour, Becky and I went to The Moth in the basement of the Fremont Abby.  We both thought the MC reminded us of a mutual friend and started talking about the last time we had seen her.

Me: Yeah, that was the time I went to their house and ended up hanging out with the little kids the whole time.
Becky: You were probably happier.
Me: That's true.  They get me.

Becky went to this book club event with some co-workers in which you walk around carrying a book, and then go up to strangers and talk to them about the book you read.  The first time she went to the event, she brought a book with a cat on the cover.  She had such a good time that she decided she would bring a Bible to the following meeting.  She could carry it proudly saying, "Have you ever heard of this one?  It's a real best seller.  You might have heard of some of the characters.  Moses? Jesus?  Seriously, you're going to love it." 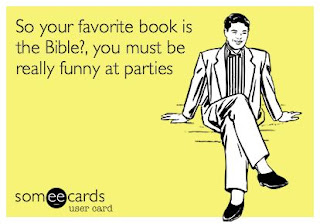 If you have never heard of The Moth, it's an event where people go up on stage and tell a story on a particular subject.  On Thursday, the subject was Envy.  It was pretty funny.

My favorite story was about a guy who grew up dirt poor and didn't have any friends.  His parents made some shady trades and he ended up with a trombone that he played until he was awesome.  Then, in 9th grade, for the very first time, he was invited to hang out at a friend's house.  Ben played the guitar so they were going to jam together.  When he arrived, Ben told him that he could go into the pantry and get a snack.  He had never had a pantry, never mind an abundance of snacks to choose from.  When he went into the closet and saw a giant box of chewy granola bars with the delicious chocolate chips he thought to himself, "F-- Ben and his box of granola bars!" and proceeded to eat an entire Costco sized box of chewy bars.   Was never invited back after that. 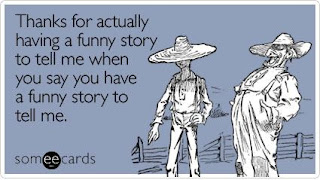 Saturday the weather continued to be gorgeous so Dr. Rach and I went on a hike.  We brought Zach, his two friends, and the three dogs.  Given that I am extremely out of shape, I was very happy to have the dogs as an excuse to why I was going so slowly.  I still felt bad that I was hold everyone up, but was also feeling a little nauseous, so I didn't speed up either.  I wonder if Dr. Rach will ask me to go on a hike again?  :P  We were pretty sleep when we got back (not having lunch might have also contributed to our fatigue.)  I gathered my last bits of energy to go to the grocery store but could not, would not, go to Costco like I had planned.  By 8PM, I climbed into bed and fell asleep until 5 the next morning when Percy was ready to get up and play again. 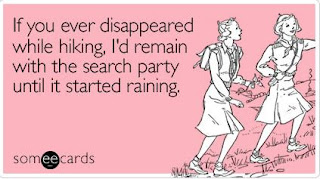 Oh! Percy lost another tooth.  Here it is hanging out to its side before Percy would eventually just swallow it. 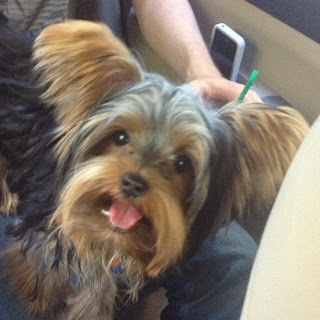 I missed Kyle's First Holy Communion, and I was feeling terrible about it.  I called him to see how the party was going and I heard a lot of "Why don't you love Kyle as much as your other nieces and nephews!?"  Way to make me feel terrible guys!  Here's a picture of the handsome guy: 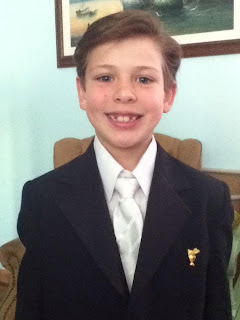 Sunday, the previously mentioned brunch commenced.  I only freaked out once, after everything was completely ready and didn't know how to proceed after that.  I think, all in all, it went well.  After everyone filled up, we headed down to the pool and then the boat because it was that lovely out.  I commented on how coordinated Jen and her two daughters were in their purple bathing suits and purple outfits.
Me: Do you just always buy purple for everyone so that you always match?
Jen: This was completely a coincidence.
Lucas: I always buy red, white and blue. I love America. Yes, I realize it is also the colors of lesser nations like Great Britain and France. 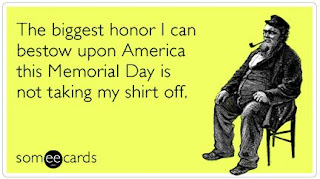 Lucas also told the people in the pool his desire to name his children Clifford and Pashmina Shaw (Cliff and Pasha for short.)
Dawne: I like how your wife has no say in this.
Lucas: No, she'll come to me and say "I want children named Clifford and Pashmina Shaw."
Michelle: And that's how he'll know that she's the one.
Dawne: I'm surprised that Ashley said she doesn't want her own kids, she just wants to take care of someone else's.
Ashley: I just don't want to have the baby.
Lucas: You can only truly appreciate through the pain.
Michelle: Spoken from someone with experience. 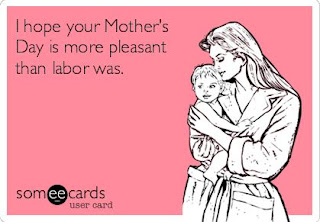 I'm not going to lie, I could have fallen asleep at 8 again on Sunday, but instead, we went to see Iron Man 3.  Maybe my expectations are low, but I thought it was a delight.  On our way in, we were talking about a song from the 20's that was about a wonderful world etc, and Lucas said, "Little did they know a year later the stock market would crash."  That's when I felt like he jinxed us all, and I wanted to make a note of it for posterity. 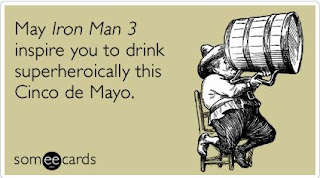 Posted by skcorynaffit at 2:14 PM