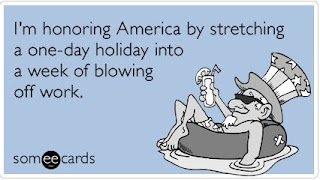 I went to Kidd Valley for lunch the other day, and there was this couple with a small child.  I mentioned that I liked that they were very matchy match.  They apparently didn't notice that the three of them were all wearing bright orange.  I asked the little boy what he had been doing with his grandparents and the grandpa said that they played some whiffle ball.
Me: Did you have fun?
Boy: Well, I didn't break any windows. 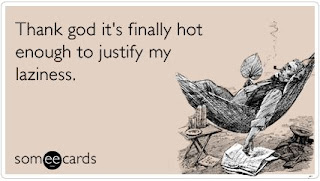 My friend has been very into getting fit over the past year.  He posted an invitation to join his beach body challenge on Facebook.  I saw the invite, but to be honest, kind of ignored it.  But then, I got a message from him saying, "Really!? I’m so glad you're doing this!"  I told Becky how I didn't have the heart to tell him that I accidentally signed up for the challenge.  Rather than correcting him, I decided to do it and wouldn't she like to join us?  After she stopped laughing at me, she went home and started to panic because she has a phobia of diets.  Luckily, Jared walked her through it calmly and now-- we're starting the beach body challenge in a couple of weeks! 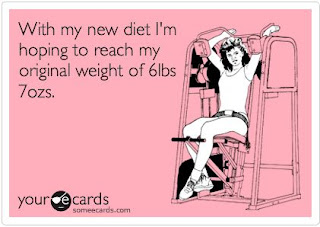 Seeing as I still have a couple of weeks, and it has been crazy hot, when Dawne asked me what I wanted for dinner on Tuesday, I said Fro Yo.  Derrick and Zach mocked my usage of the term "Fro Yo" but they also decided it was a good idea to join us, so. There. 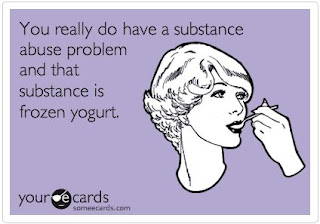 All of the puppies got Giardia last week.  Two weeks ago, a sewage pipe broke in our yard, and before we even knew about it, the dogs were all up in it.  You know, because dogs are gross.  As we took them inside to get baths Dawne said, "Now, they are going to get Giardia."  4 days later, Casper showed signs so she brought him to be tested, actually before he was positive.  And then on Monday, when Percy showed the first sign, we brought all three to the doctor where they all got IV's for dehydration and lots of medicine.
Me:  Percy seems pretty happy for such a sick dog.
Dawne: That’s because he has a mom that when she sees him have diarrhea once, rushes him to the vet.
Me: Oh yeah.  He does have one of those.

Dawne's dogs also come right up to her and practically open their mouth to get medicine.  Meanwhile, Percy, is suspicious of all treats, assuming that they all contain something peculiar.  When trying to get the eye dropper in his mouth, he burrows his head so you can get to his mouth.  Dawne said it was because her dogs know the medicine will make them feel better, I think they just love her more. 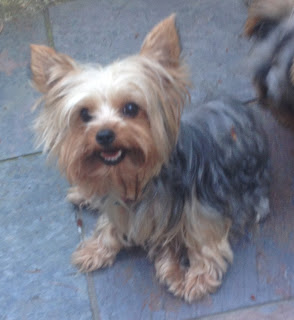 I finally saw the Avengers, and I loved it.  I also got a haircut, which made me really happy.  11 inches shorter, and back to blonde.  I *immediately* felt cheerier.  It was a long dark 7 months of being a brunette that weighed my soul down.  So happy to be back to myself - and just in time for a heat wave!   Two weeks ago, someone at work asked me to make shirts for the pride parade, and miraculously, my partner was able to create shirts in time.  As our mailing system can often be delayed, I asked the boxes to be sent to me at the Fed Ex place near the office.  This would have working out well, if they hadn't then sent it UPS.  Long story short, UPS was amazing and put me in touch with the driver who then met me at 7:30PM at UPS office.  Although, originally, it sounded like I was going to have to drop everything and meet the UPS guy as soon as he called me - which kinda messed with my plans of getting a haircut.  And no, canceling my haircut was NOT an option.  After I picked up the shirts, thankful for both receiving them and that they fit into my FIAT, I met the fam for Teriyaki and then Becky and Jared for drinks at the Malt and Vine - all with Percy in tow.  :) 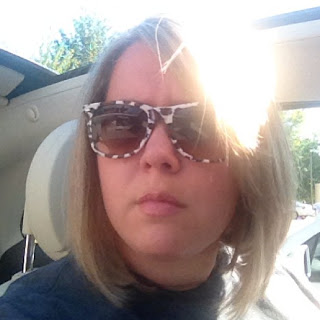 On Saturday, I am sure we did something awesome, but I can't remember ANYTHING.  Oh wait, that's not true.  We were going somewhere and Lucas, in 90 degree weather, comes downstairs in sneakers and socks that nearly came up to his knees.
Lucas: Why are you laughing at me?
Dawne: I'm not laughing at you.  You're doing something funny, on purpose, I'm laughing with you.
Lucas:  This was not to make you laugh, this was because they were the only socks that were a pair.
Dawne: Come on.  You did purposely to make me laugh.
Lucas: I give up. 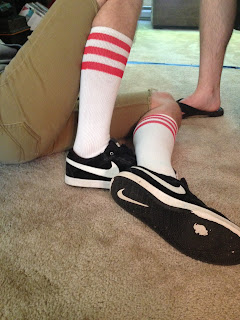 Dawne: I'm allowed to go to Luke's shows as long as I don't yell, "I'm Lucas' mom!"
Lucas: And yet, it happens every time. 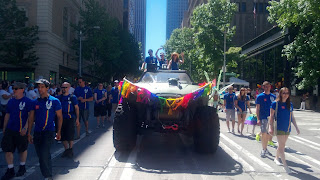 On Sunday, I got up early so that Percy and I could go to the Seattle Pride Parade and walk with the Warthog and 343.  My co-worker had a Great Dane, and the contrast between the two was amazing.  Another co-worker made Percy famous by tweeting about him.  He got bored waiting for the parade to start so he fell asleep - but once we got going he was so happy and proud walking along as if the crowd was totally cheering for him, and him alone.  At one point, a drag queen saw the Warthog and yelled, "I want to play with your toy!" and stopped the parade so she could jump onto the Warthog.  Classic. 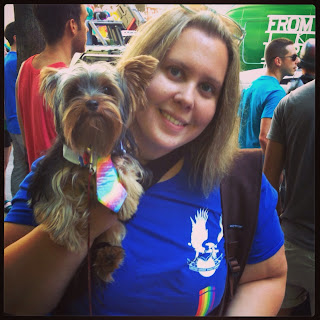 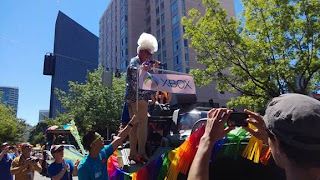 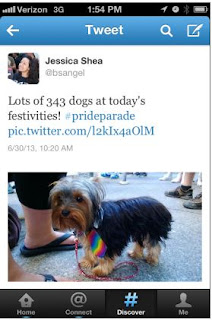 We finished up the day with some pool time and a BBQ at Diana and Jason's.  We played some corn hole, and I managed to get one of the bean bags onto the roof.  Whoops!  I hope you all had an awesome week... and that you have a beautiful fourth!

Posted by skcorynaffit at 3:27 PM