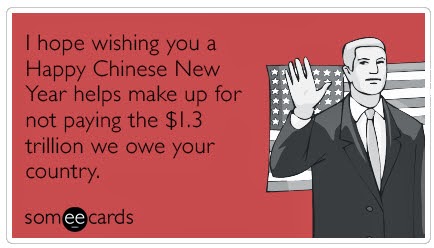 I hope you all had a wonderful weekend and are enjoying your chilly, cold or down-right freezing week.  Weird how you can be jealous of all of the snow when you’re so far away of it.  I find myself loving this year’s weather, more than I ever have in PNW.  The summer was warm and lovely for much longer than we have ever had it, and now, we’re having a particularly cold winter.  Cold days means we don’t get rain and we see bluer skies and the occasional sunshine – unheard of in these parts most years.  I’m so glad that this is the year we decided to jump full force into this walking thing, because as tough as we pretend to be, no one likes to be drizzled on in the morning.  Plus, when the ground is frozen, the dogs don’t get as dirty.  Win, win, and an extra win because that’s what the Bard would have liked. 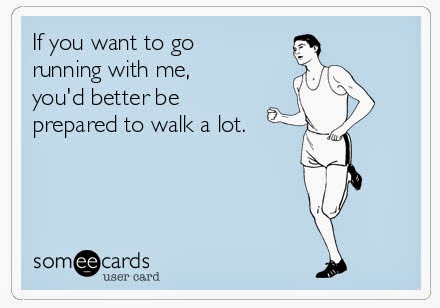 Maybe I’m appreciating life a little bit more than usual this week after losing a friend last Wednesday.  Annie was such a sound person.  Full of intelligence, wit, and good morals.  An original member of the Try New Things Club, I can’t fathom how one so young will never be able to try another new thing.  In weird twist of fate, Kelly, Becky and I will be in her homeland next week for her birthday.  I promise to have a drink for her (though not that putrid shark stuff), be diligent when editing press releases with triple spaces, and think of her every time I ask a waiter to remove the cilantro from my meal.  I’m sending you all a virtual hug (my favorite kind) to let you know that you are valued, and because you just never know what tomorrow will bring. 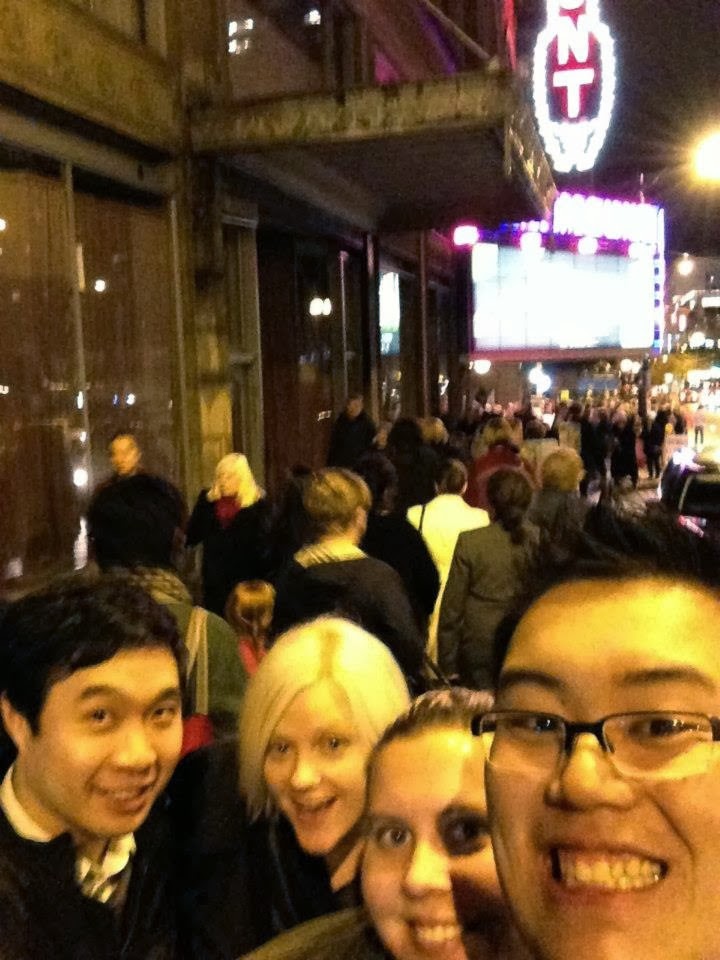 On Monday, Luke was feeling a little down, so we took a mini-vacation down to South Center (20 min away) for dinner at the Rain Forest Café.  We braved a thunderstorm, and survived the presence of so many exotic animals while having some seriously okay food.   Though, it did make me want to double my efforts to find a good trip down to the Amazon & South America.  I felt bad that we didn’t actually know where anything was, so Zach had to crutch it down every hallway of the mall.  I’d say it was good for him, but I also know that any prolonged crutch activity makes your hands go a little numb. 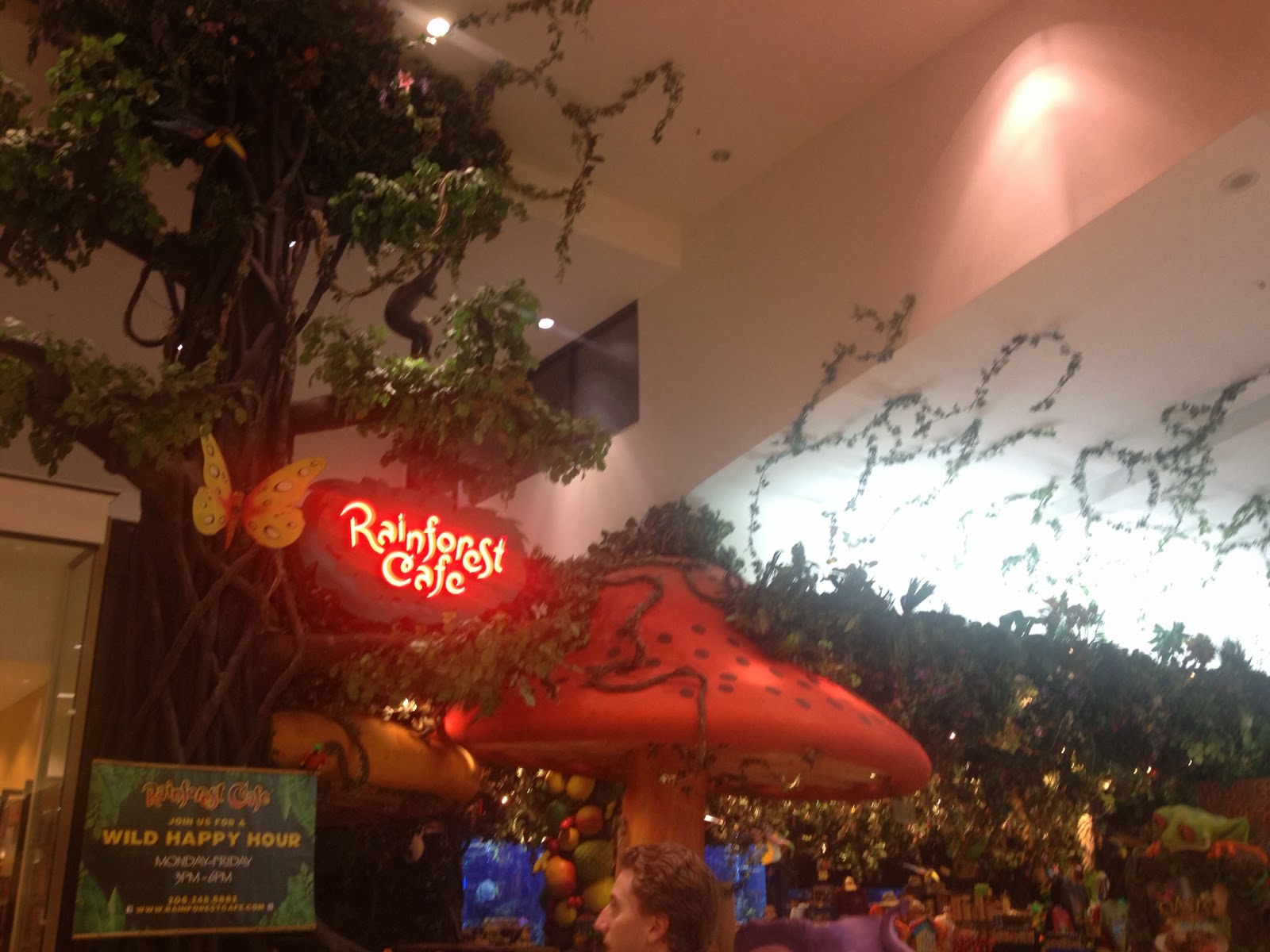 Then I think there were three nights of watching the Gilmore Girls including full length “discussions” about the merits of Jess vs Logan (no one in the house is a Dean fan.) 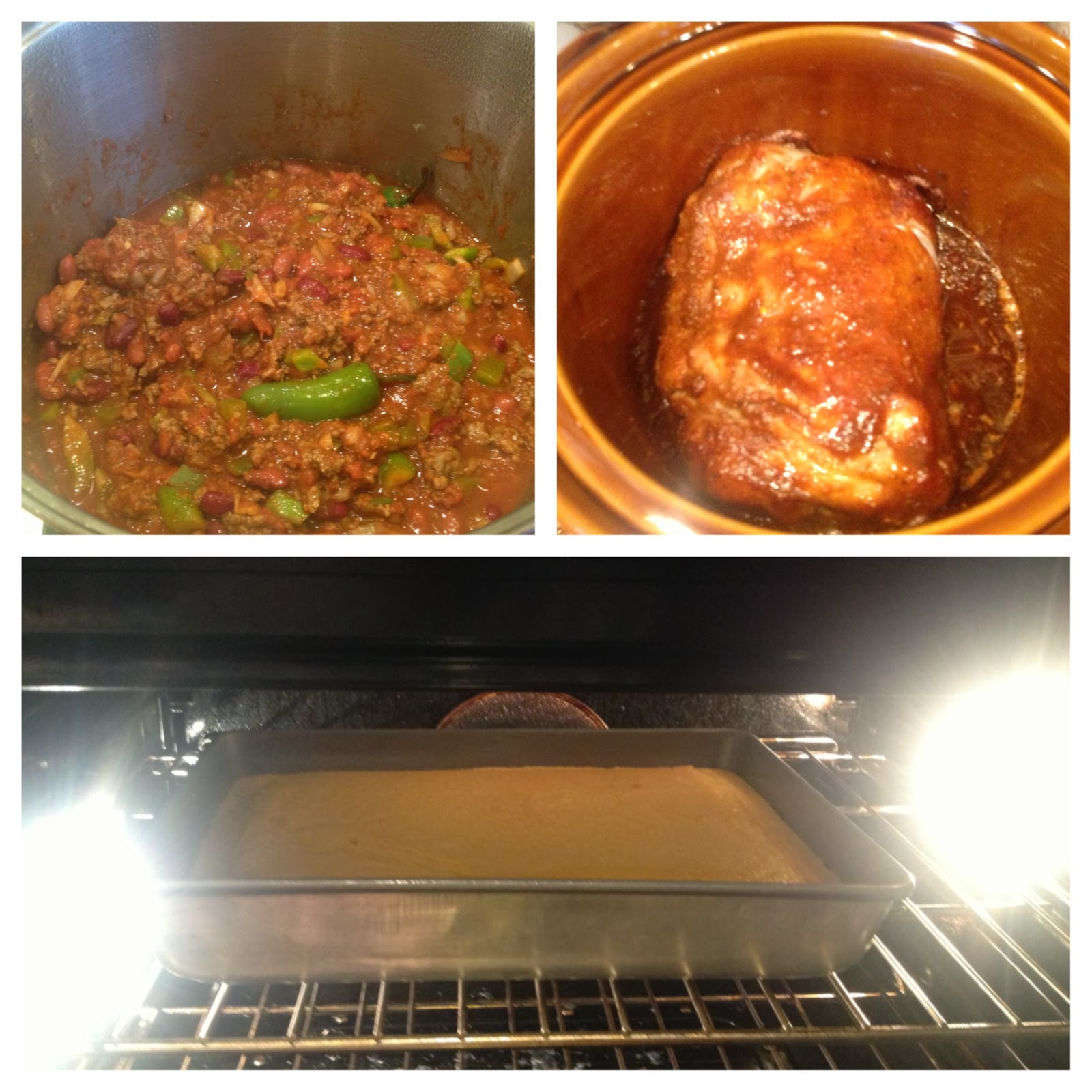 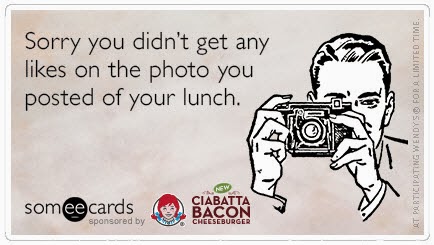 Stacey sent me some recipes so that I could recreate what she made for Sean’s birthday, for Super Bowl Sunday.  I had to go to three different grocery stores, but I finally attained everything needed.  I managed to make pulled pork, chili, corn bread, the chicken for the taco rings, and chili cheese dip on Saturday, so it was ready to go for the party the next day.  We also did a bunch of cleaning because the process of cleaning out rooms to move is a very messy one.   I also ran down to the brown house to obtain my passport, throw what I thought I might need for Iceland, and quickly packed up my whole room.  Then we moved all the furniture out of the two bedrooms into the third so that that the floors could be finished.  Skipping ahead to Sunday night, I was kinda laying out clothes that I wanted to pack when I decided to look at my passport to make sure that it wasn’t expired.  That’s when I discovered that I didn’t have my passport.  I must have gone down to the brown house, picked up my passport and then… I don’t know.  Put it back?  Left it on my bed and then rolled up my bedding and packed it? Put it somewhere else?  Trying not to panic, I walked down to to the brown house to check out this situation. I walked in and confirmed that it was much worse than I remembered.  I couldn’t get to any of the bins, the closet was completely blocked by furniture; the outlook was bleak.  But then, I saw one single bin that was accessible.  And on top of that bin was think pink box that held my passport, and without having to move anything, I reached down and retrieved my passport.  Thus using up my luck for the rest of the year.  J Whoot! 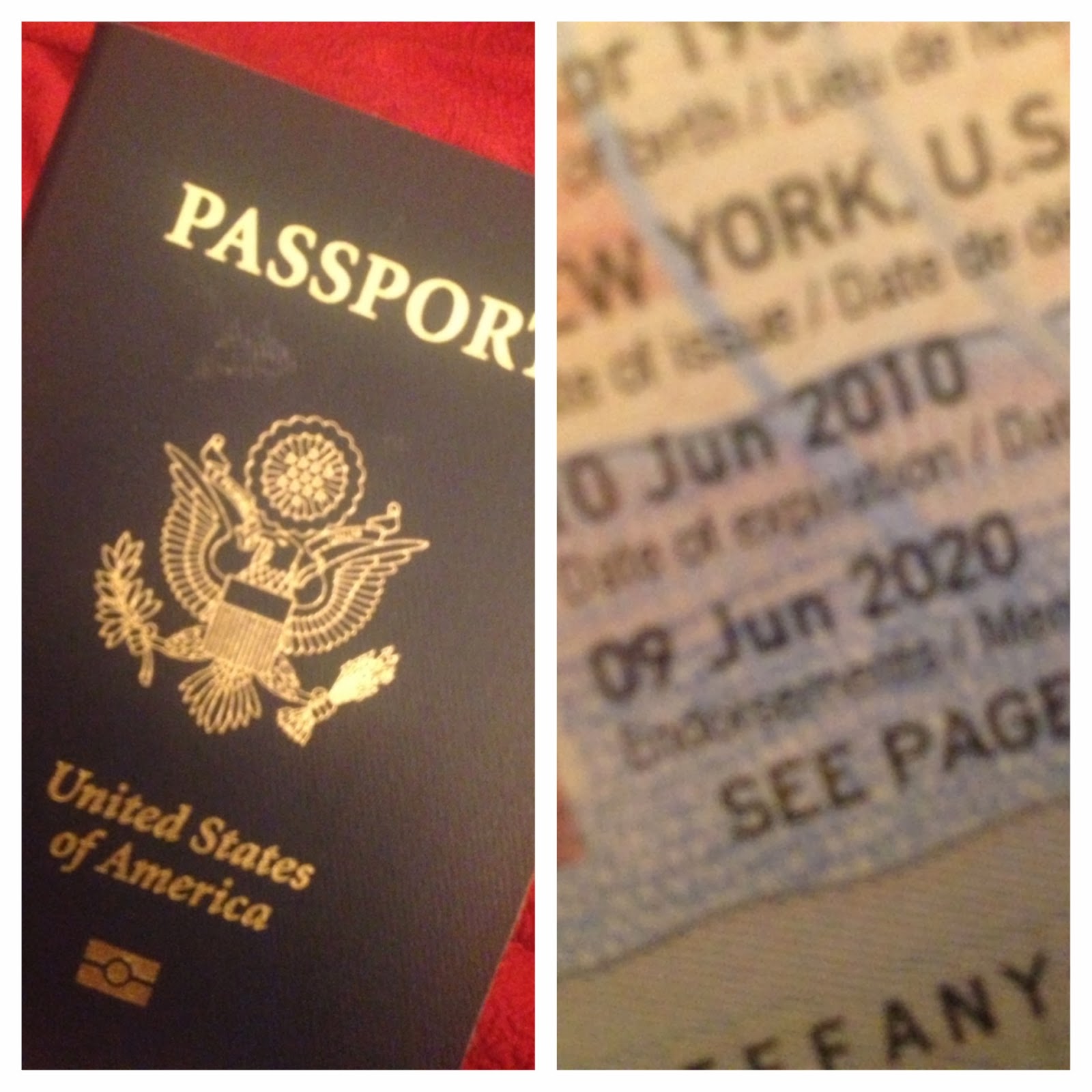 Backing up a bit, we had some people over for a little Super Bowl action on Sunday.  Food was eaten, drinks were drunk, a little of the puppy bowl was watched, but mostly, we all enjoyed the perfectly boring procession to victory. 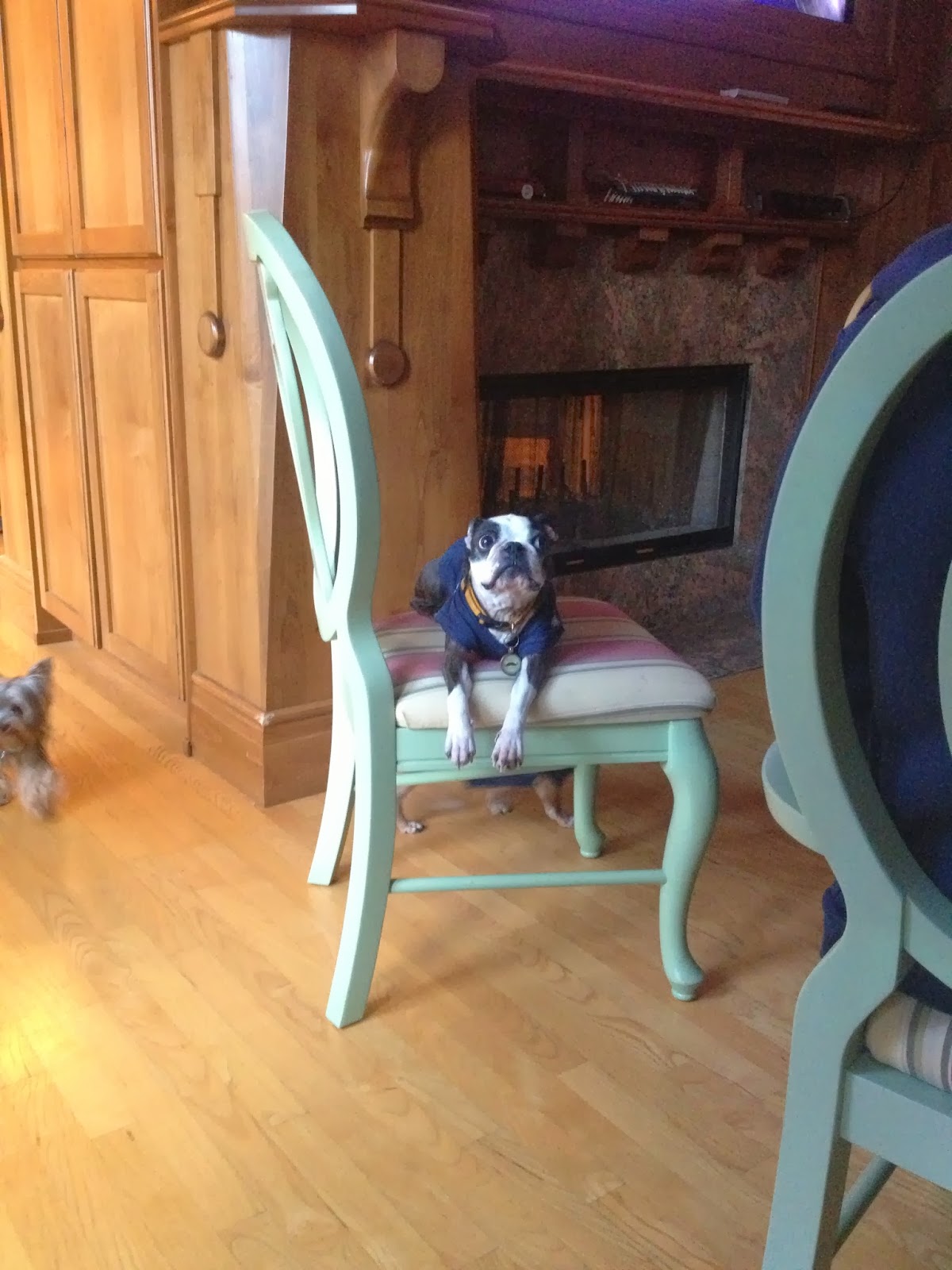 We have two TV’s on either side of the fireplace, so during the half time show, when Jordan walked to the other side, he commented, “Huh.  I thought you’d see the back of them.”

Shana: Can [Bruno Mars] and JT have a dance off and then a pants off? 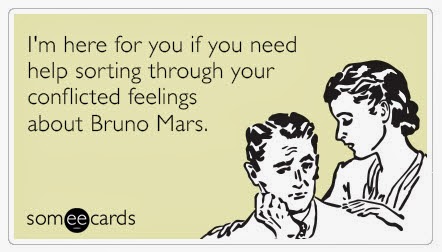 Kelly: How old is that guy? (Anthony Kiedis)
Laina (?): Are you rethinking your position on older men?

Shana was also showing us pictures of wedding dresses that her cousin Jenna was trying on.
Rach: You’re trying on wedding dresses?
Shana: Yes, I’m taking pictures for my vision board.  Tiffany, what are you laughing about?

And, in case you didn’t see this gem, here’s how Seattle riots:
http://blogs.seattletimes.com/today/2014/02/twitter-pokes-a-little-fun-at-seattles-rioting-politeness/

I think that’s about it from me.  I’ll try to do something interesting this weekend so I have something to talk about on Monday. 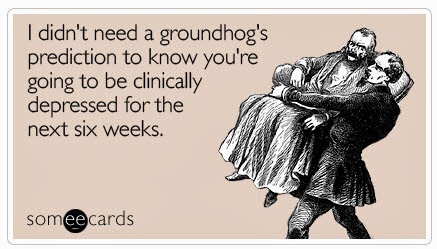 Posted by skcorynaffit at 2:36 PM