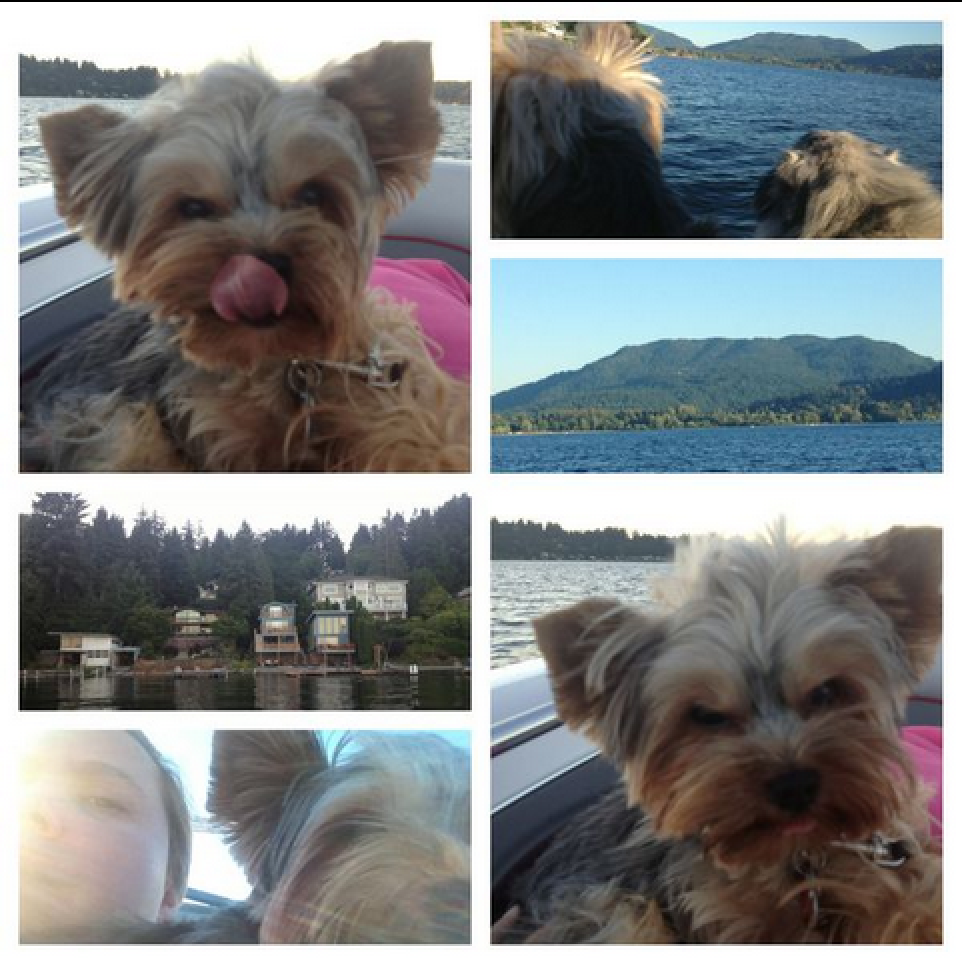 On Monday, it was so lovely out, we went for a boat ride.  Percy and Casper were big fans, and also really nice fur blankets for when the sun went down.   I'm not entirely sure how it happened, but just after the poison ivy scare in NY, I ended up with the gift of Ivy de Poison.  Though it is suspiciously located where Percy's paws prefer to perch. Luckily, it's only in a small spot, but still hella annoying.  I was very grateful for easy access to spray benedryl. 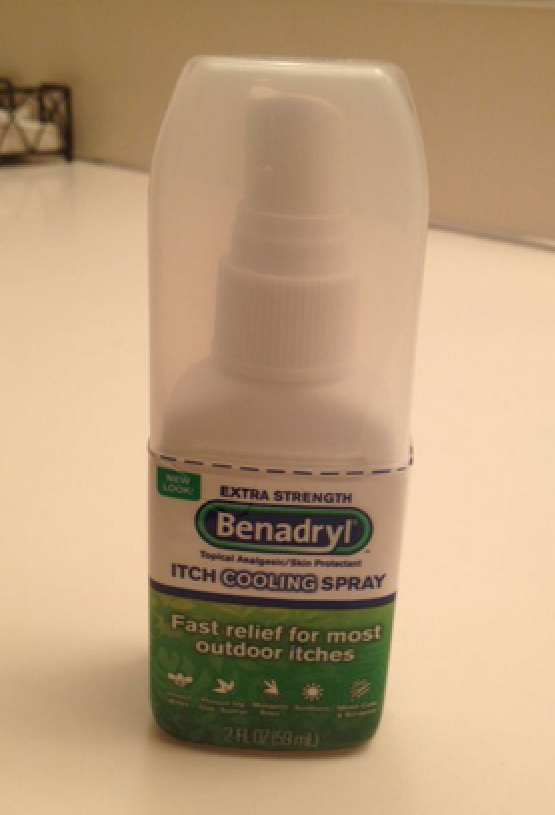 After work on Tuesday, Dawne put on a movie.  She told me it was a sweet movie about a man protecting his family.  5 minutes in a zombie came out of NO WHERE.  Percy ran to comfort me, and together we finished watching World War Z.

On Wednesday night, despite the 90 degree weather, I decided to bake 10 dozen Brookies, 5 pounds of Mac and Cheese and 3 pounds of ziti - all for the upcoming Lady Liberty Party.  It was ridiculously warm that evening, so cooking was a terrible idea.  Plus Zach was having fun in the pool with friends while I was all grumpy and hot.   The nice thing was that while making and baking, I was reminded of how my mom used to make brownies and cut all the crusts off for us.  Don't worry, crust-loving-weirdos, she put the crispy bits in a ziplock for Maureen's BFF, Doreen. 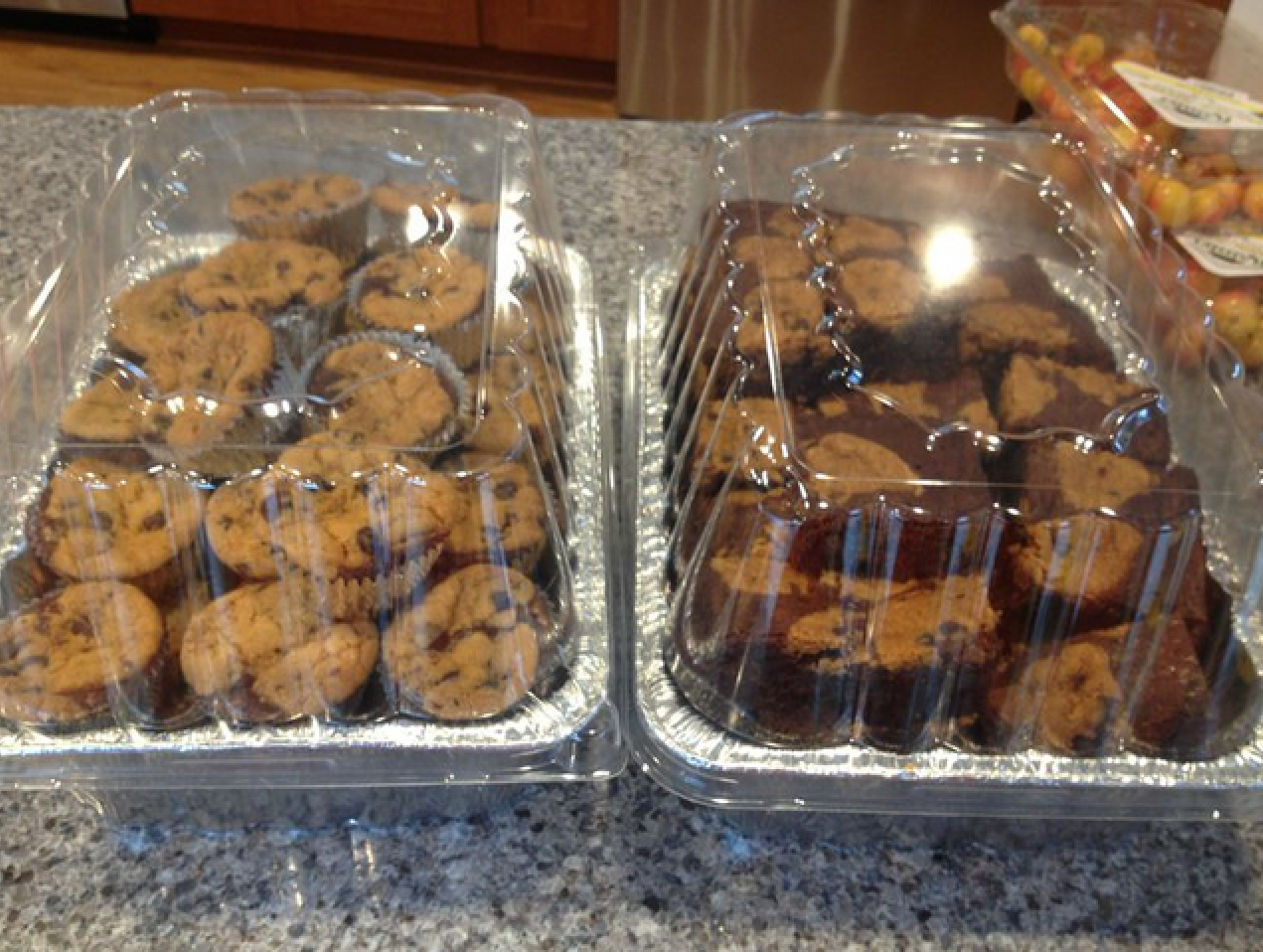 The following day, Nater arrived in from Chicago for the weekend.  We all met in Seattle to go to an art walk that our friends Sandy and Zeynep were showing at.  Prior to the event, we grabbed some coffee and pizza.  This is when I heard the following conversation between Nate & Arda.

Nater: Pie is a basic right of freedom.  It's pie, then freedom of speech.
Arda: Wait, what about gun?
Nater: Oh right, pie, guns, speech and then knives and forks.

Nater: Did you watch the World Cup?
Lucas: No, I was hiking that day.

The art walk was super fun, even though I don't know how I feel about seeing paintings from Sandy's living room and dining room for sale.  Actually, I do know how I feel: not good.

Sandy: I went out with my book club on Saturday for dinner.
Me: You're in a book club?
Sandy: Well, it's more of a wine club.
Me: Do you still read books?
Sandy: Yeah, but we don't actually read the same book.  In fact, last week we went to go see Funny Girl together.  However, we do all know HOW to read.

Dawne: Jordan and I went to a wine and paint class last week, but I was so embarrassed by our work I wouldn't let him take them home.  He offered to bring them for the bonfire, but I was afraid part of it wouldn't burn and it would get back to us. 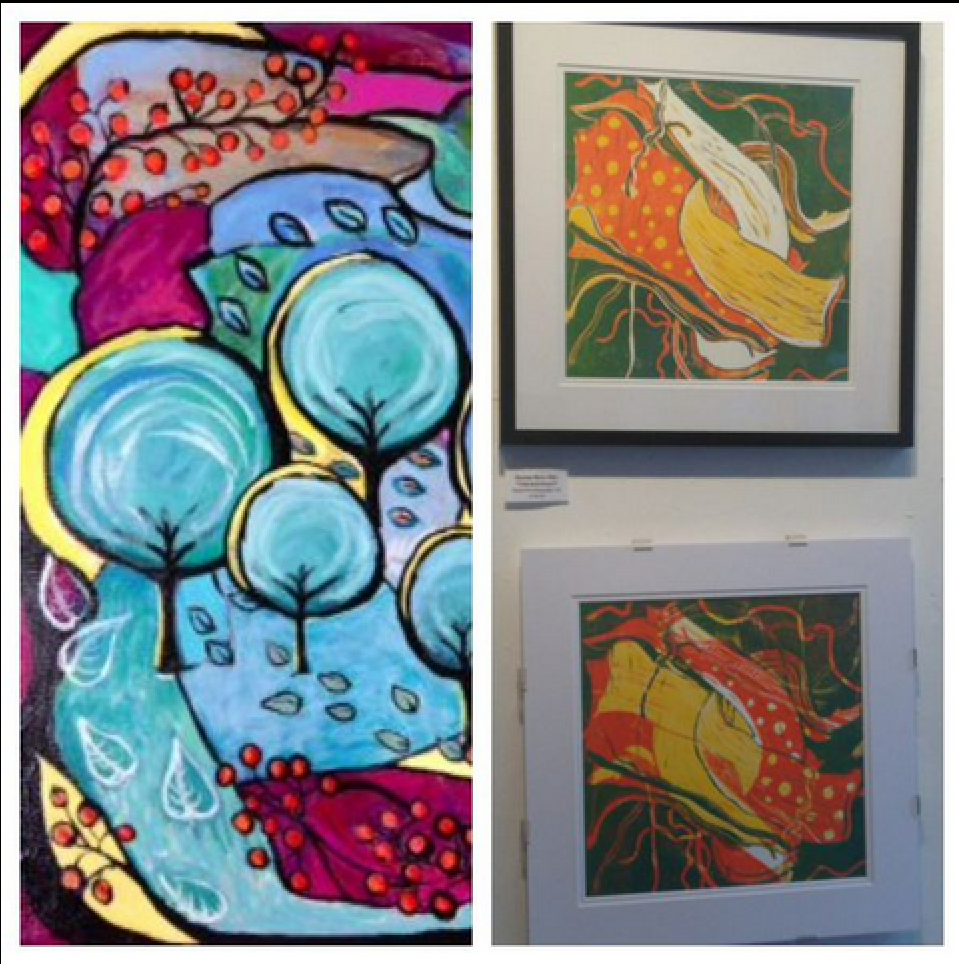 The boys were all deep in discussion on Friday morning when I heard Zach say, "Hey, (insert name of his alma mater) isn't hell.  It's just a low bar.  Maybe the definition of a low bar."

Friday was also the big party day, so there was lots to do before hundreds of people arrived. Lucas and I took separate cars to do our errands.  While still in the driveway, we put our windows down and I heard Lucas say, "Siri play Tarzan soundtrack." When I left the party store and was trying to get the balloons in the car, a woman came up to me laughing and saying, "What's really funny, is there is a guy over there, also in a Prius that has his own share of 50 some balloons that he's trying to shove into a car just like you!" Yeah, that was Lucas.  For lunch we went to McD's, the most American place we could think of.  I then made us stop off for even more ice on the way home.  We had to park the cars up at the other house for space, but luckily, Lucas helped me carry the ice.

Me: You're so strong!
Lucas: That's why they call me macho man. It's not just my affinity for disco. 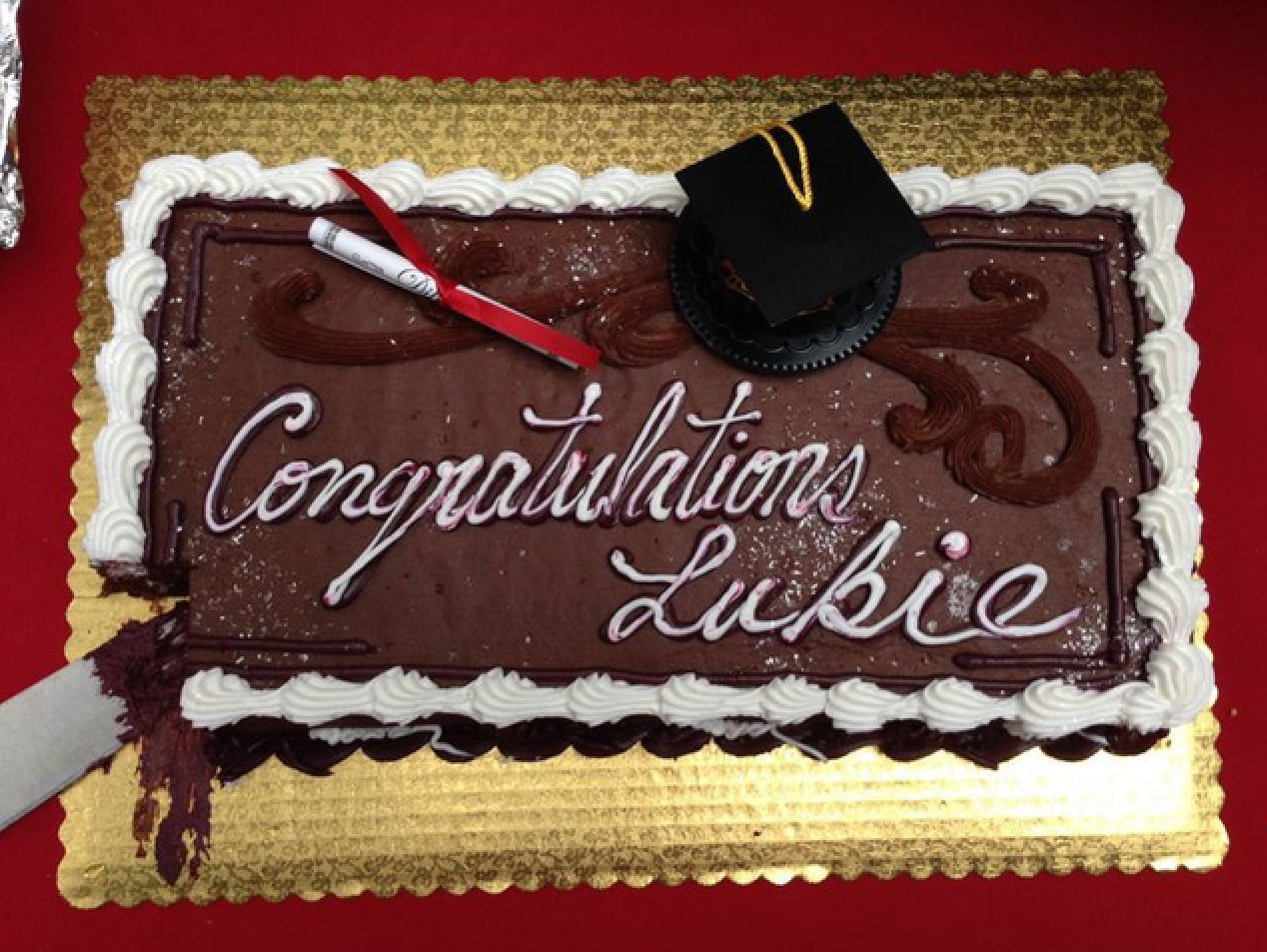 During the party, Amy and Tyler arrived - Amy holding a baby and Tyler holding a dog.
Me: Did you bring me a dog?
Tyler: Kind of.  I found him on the road.
When we asked Dawne if she had ever seen the dog before she oohed and aahed, took him into the house and called him Jack, on account of the fact that he only had one eye.  Then she proceeded to get upset that he wasn't responding to his new name.  I told her repeatedly that we were NOT keeping Jack, the one-eyed pirate.  The pups had a kind of rough night actually with the fireworks, in fact at around 1 am, Casper and Nala ran away.  Well, Casper ran like 8 blocks away, and Nala was hiding under the bed.

After the drama of looking for Casper we were so emotionally exhausted, we just went to sleep... forgetting to clean up anything.  Including shutting off the grill (which had a pot of chilly simmering on it), and never unplugged the crock pot and a host of other sadly wasted food.

Otherwise, it was a pretty successful party.  We went through over 200 plates, which is kind of the only way to explain how many people were there.  On the following day, we were cleaning up and we found a yo-yo on the ground.

As we were cleaning up some of the condiments, Luke told me, "When I was lil I used to feel bad for ketchup b/c it didn't get the same respect as all the other sauces.’Oh ketchup? You can get that over there.'  Why isn't it with all the other sauces?"

Oh! And we brought Jack over to the vet and found a flyer so we could return him home.  The rest of the weekend was spent in the pool or on the boat.  Seriously, all day.  And I know I'm old enough to know better, but I didn't reapply my sunblock enough, and got super burnt.  I think I was trying not to put the lotion on my sunburn, but instead I just got sunburned poison ivy.  Not my best work.

Lucas: I need to get my phone from your car.
Jordan: What?
Lucas: I mean, your car that goes in the water. 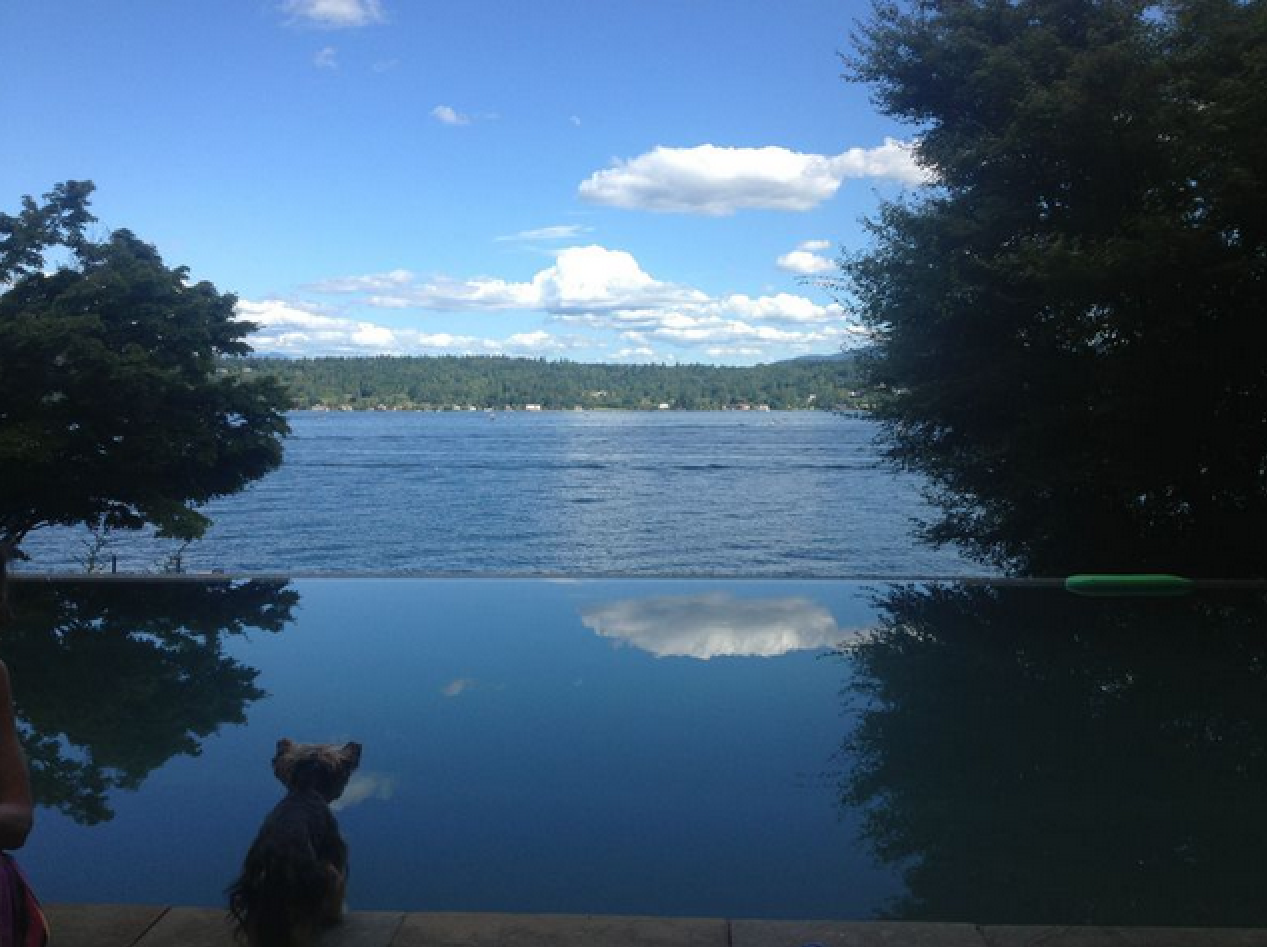 On Saturday night, I was supposed to meet up with an old college friend, but he plane got delayed.  Instead, I saw this on Instagram from my other college friends, which is almost as good as an in person visit. 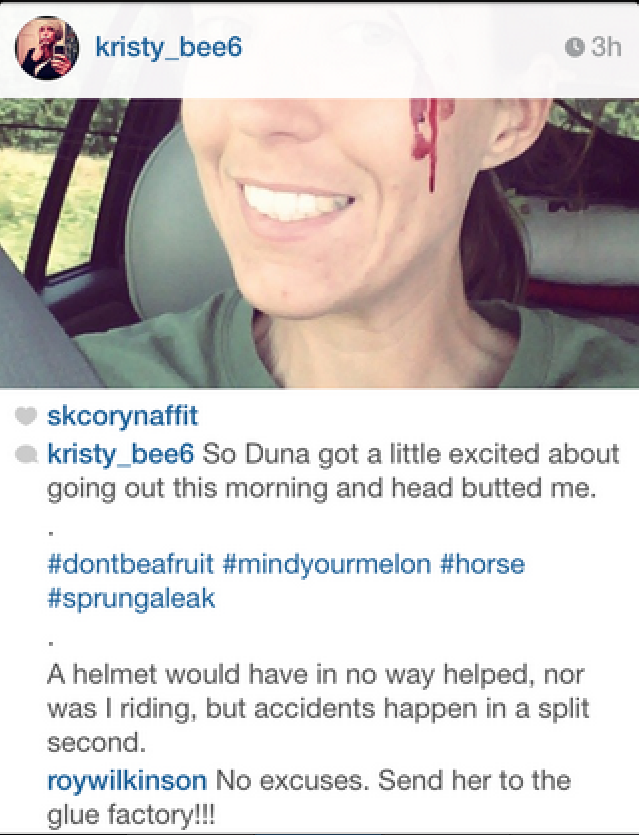 Becky still hung out with me on Saturday though.  We went to the iPic, but the fancy expensive seats were already sold out.  As soon as we sat down Becky turned to me and said, "I feel like a peasant."  I mean, seriously.  We had to bring our own adult beverages from the bar, and no recliners? Ridiculous.  :P 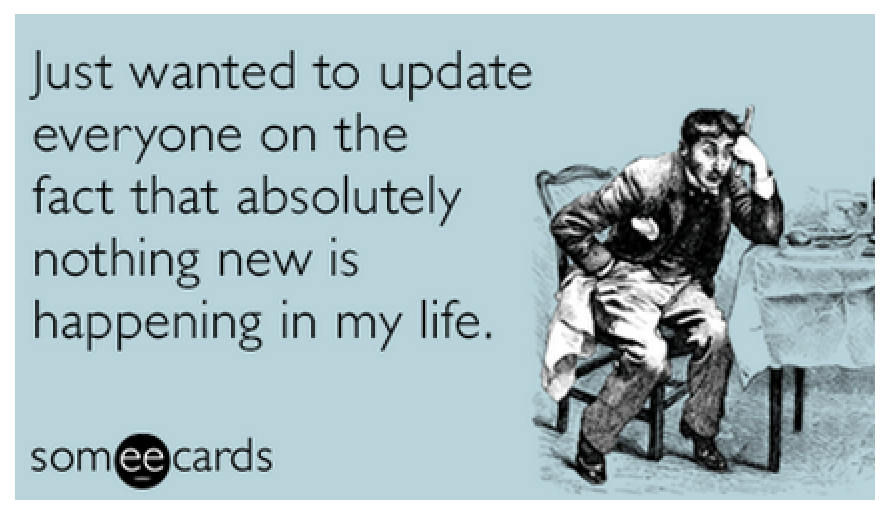 Hope you had a lovely 4th (if you can remember that far back. :)

Posted by skcorynaffit at 9:49 PM