After lunch, I was getting into my car, and had to do a double take when I saw this (you can go "ahead" and add your own caption): 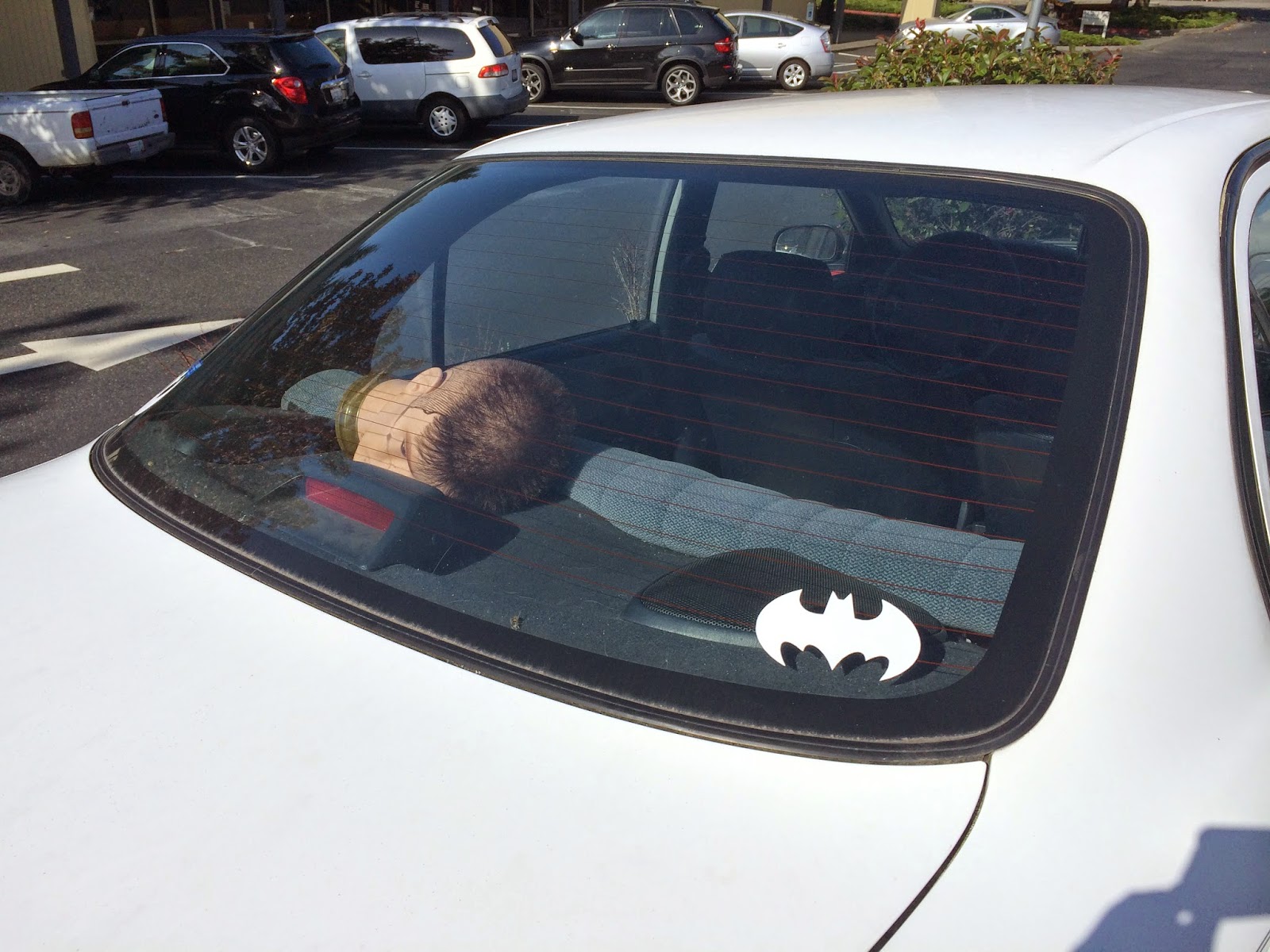 Speaking of "Dad Jokes," we spent a good portion of Tuesday evening pointing out every time a dad present at dinner made one of these gems.  We moved family dinner last week because Aunt Pat and Uncle Ray left on Wednesday.  I asked Nicki what was going on with her, and she told us a little bit about being in chorus.  She told us that she was technically a Soprano, but she asked to be placed in with the Alto's because all of the Soprano's whine a lot.  Later, Ashley was telling us a story about Nicki complaining about something (the details elude me), when Dawne interjected, "Wow, what a Soprano, huh?" Burn!

Zach: If you could spend ten dollars a month for a super power, that was really only worth ten dollars, what would it be?
Raymond: I'd wave my hand and have 100 water balloons filled and ready.
Jordan: I'd be able to make carbs disappear out of any food I looked at.
Me: Or, you could just ask for an really high metabolism, which is definitely what I would ask for.
Nater: You know that feeling when you really need to pee? I'd be able to touch someone and transfer the need to them.
Me: Winner.

Around 8 months ago, I searched the whole house for my Friends collection.  We were doing a lot of moving and packing and were were putting on our old friends like, the Gilmore Girls, to keep us company during all of the work.  The problem was I searched and searched and Friends was no where to be seen. And because we were packing up every room, I knew that it was completely missing.  I was so upset about it, I almost bought the whole set again.  Then, on Tuesday, I lent Raymond my T25 video's and on the shelf was Friends.  Dawne and I are convinced that, like many other things in our lives, someone stole, I mean borrowed it, and then returned it when they realized we were upset about it.  They must have had a helluva time getting it back into the locked house too.  Livin' on the compound and keepin' it weird since 2004.  I can’t tell, can you see it in this picture? 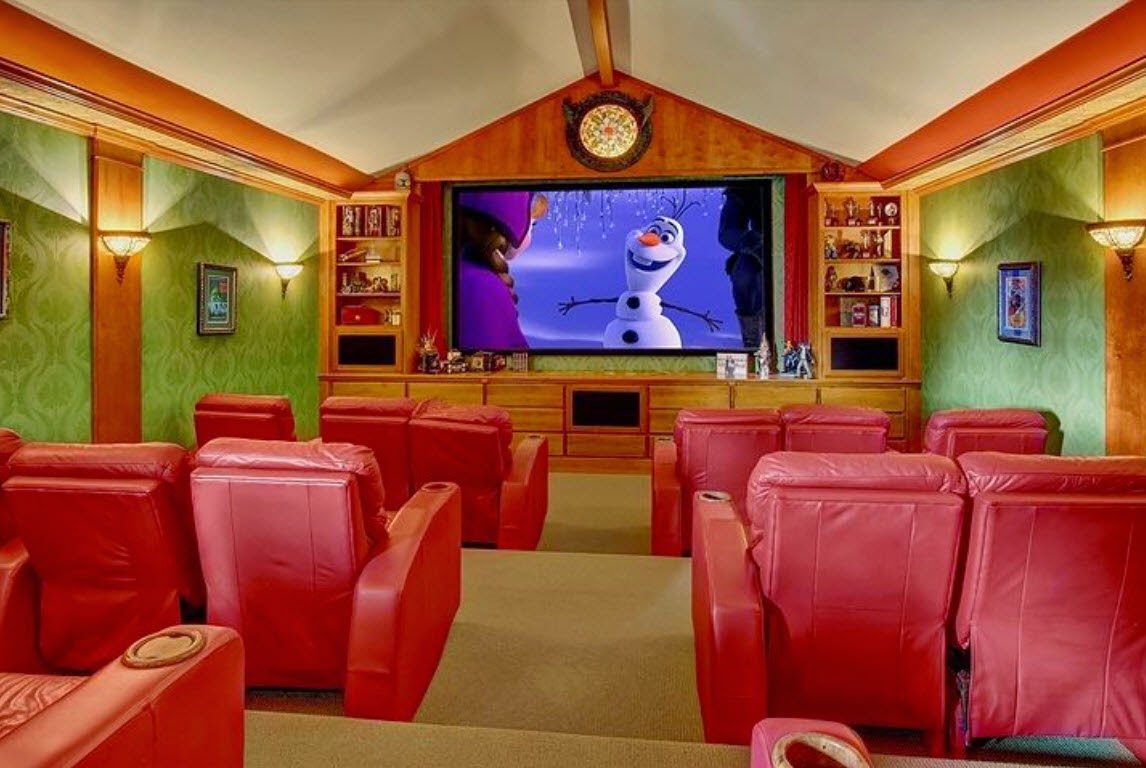 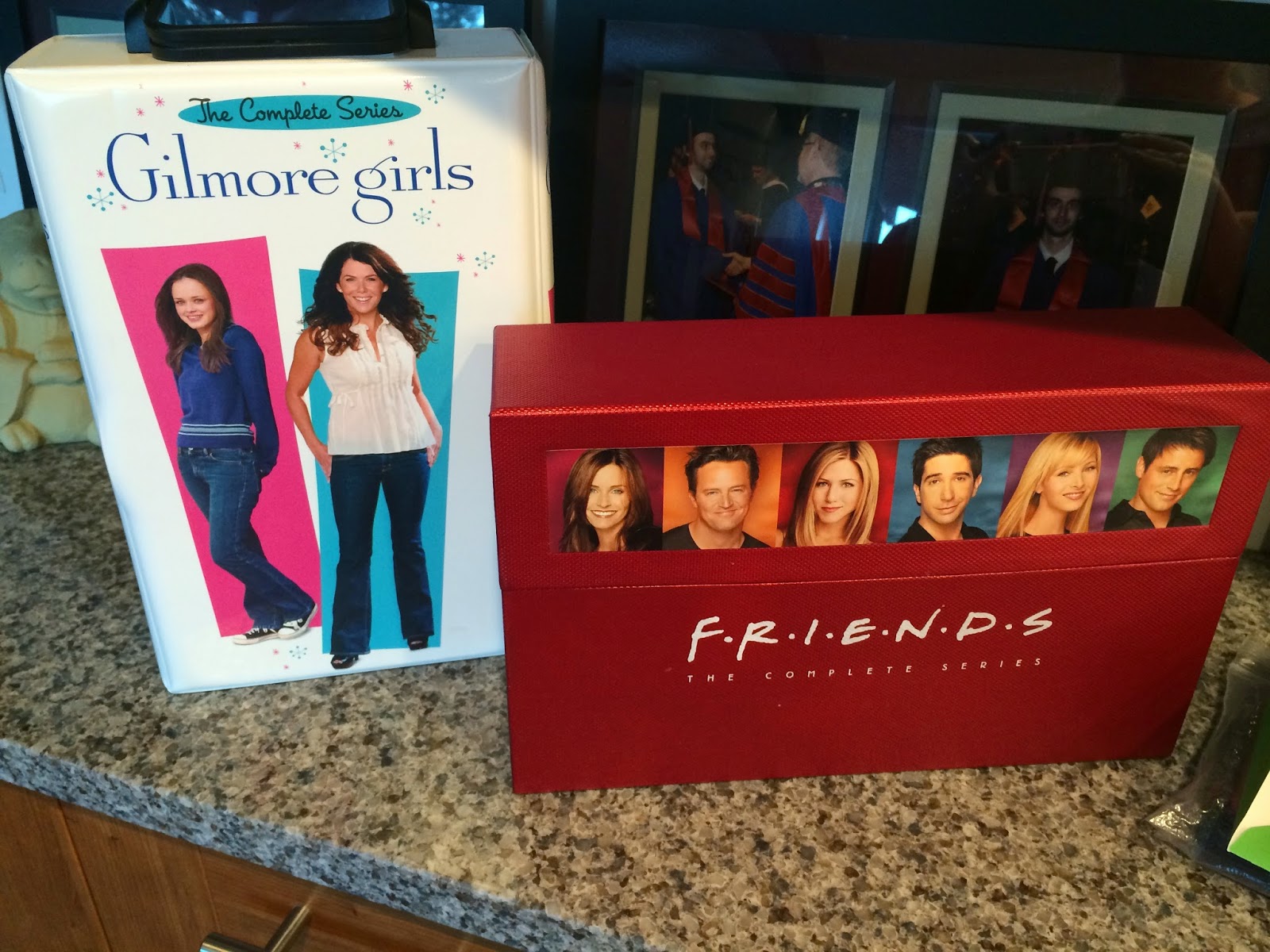 Zach & I watched some Gotham when everyone left.  Nater didn't join us; something about our invitation wasn't persuasive enough. "Hey! Want to watch this awful show, Gotham? We're hoping the second isn't as completely terrible as the first."  Either way, it was the first time I saw what Lucas named his Netflix account, and it made me giggle. 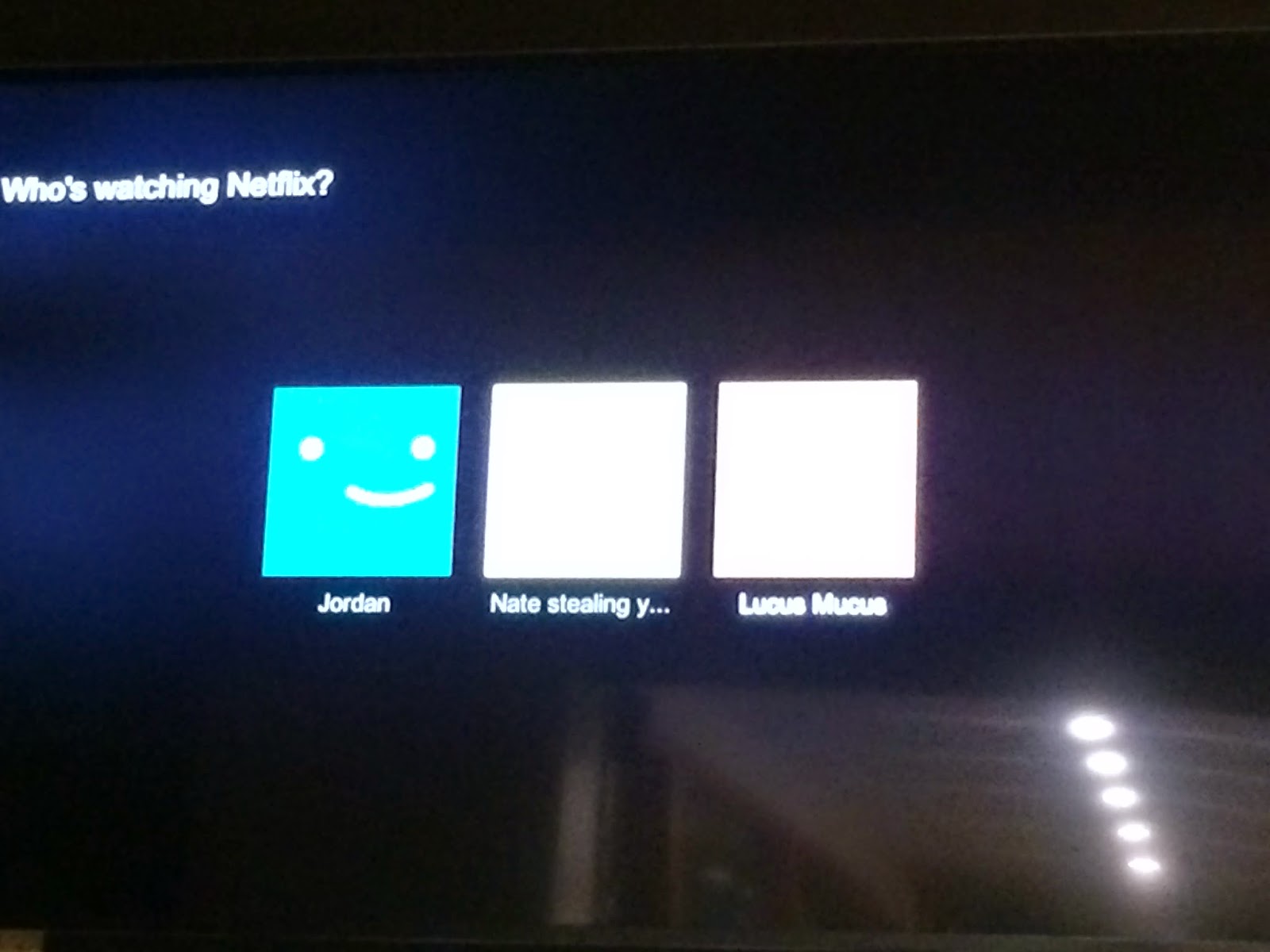 On Wednesday, I was telling my mom about the evening before, and I mentioned that Diana and Jason didn't make it.  I wasn't sure if they just forgot or got the days confused because I wasn't the one sending out the invite.  My mom helpfully replied, "So what are you are going to feed them if they show up tonight?"  Grrr.  Just in case, I picked up soup and ingredients for grilled cheese, for which Jordan and Nater were grateful.  Especially because Dawne ended up having a migraine for a day and half.  The change of the weather seems to be the worst. 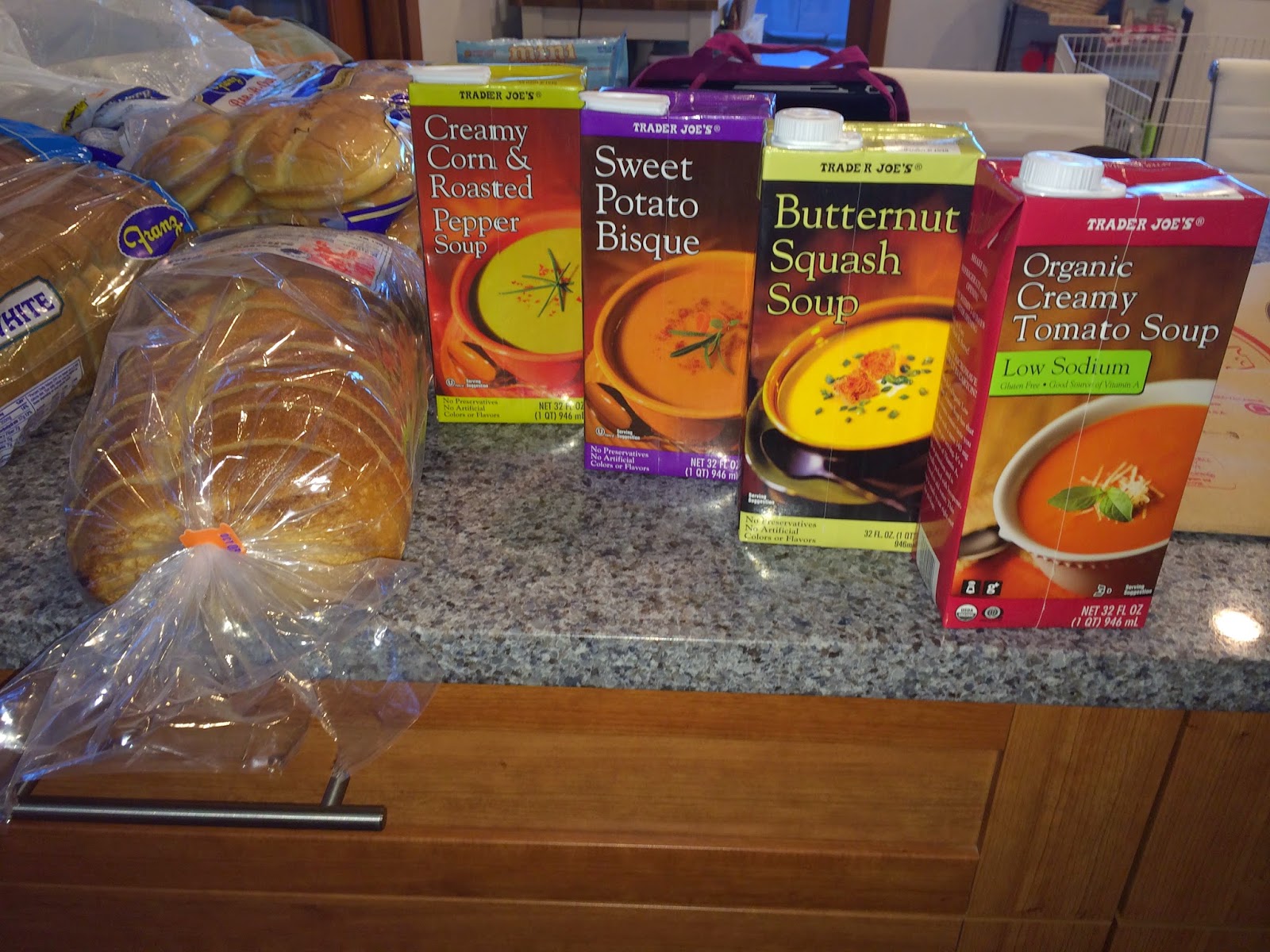 On Thursday, I was super jealous of Kathi.  And here's why: 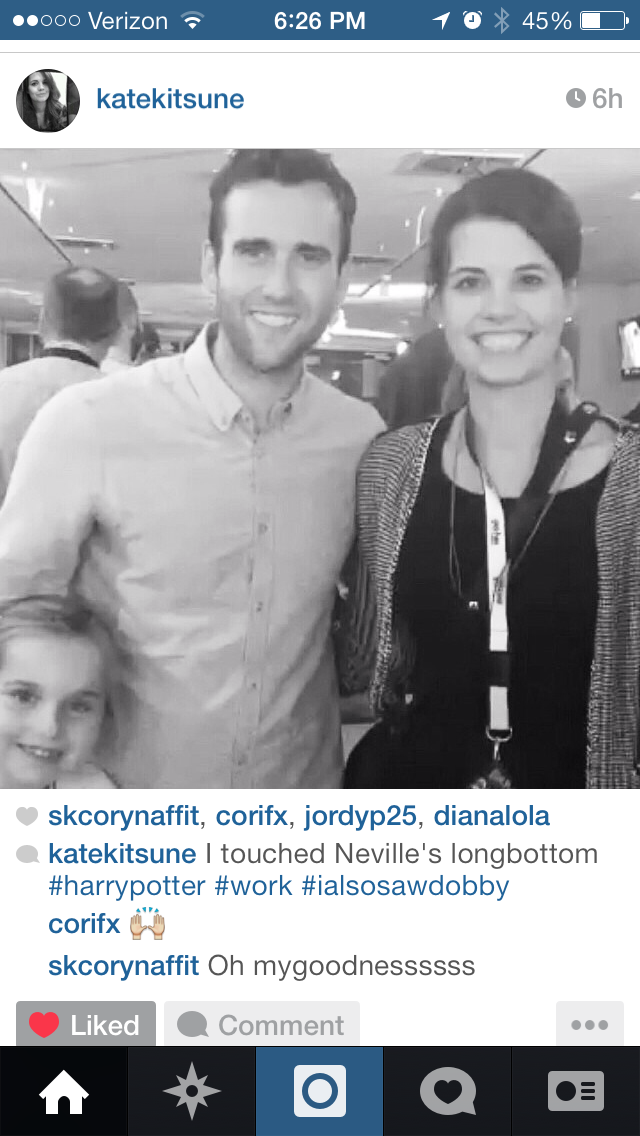 Did I mention that Doctors Rach and Anders are going to go as Hermione and Dobby for Halloween?  Dr Rach will be in her glorious and official Hogwarts robes, complete with wand and time-turner, and I guess Anders will be in a raggedy tea towel/sheet and a sock?  Can't wait to see pictures!

We all went to trivia, which was nice because we missed a couple of weeks there.  One section was all quotes.
Answer: "Get off my plane!" was said by Harrison Ford in Air Force One
Anders: That's President Harrison Ford, thank you. 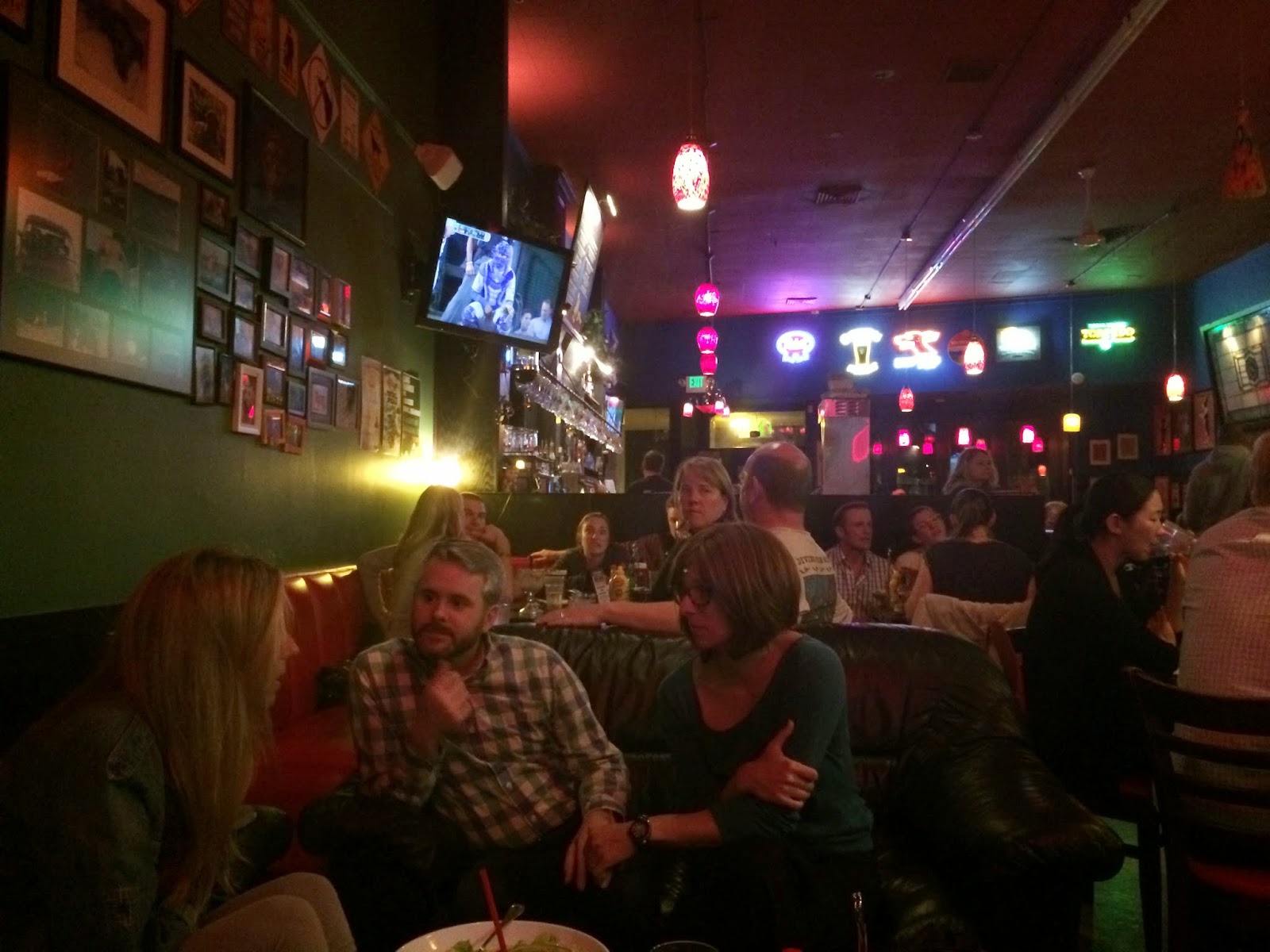 On Friday, I had set up a meeting with this guy as a reference for potential licensee. When I got on the phone, he immediately gave me a hard time and called me Tiffers.  My reply? "Oh, you must have been talking to Shana.  She's the only one that calls me Tiffers."  I love that, "She's cool" translate to "You can mock her, no problem." :)

Me: So I guess Jordan is back on carbs?
Dawne: Why?
Me: Well, I can see four loaves of bread from here.

About an hour later.
Jordan: Challah french toast for dinner?
Dawne: It's your holiday!

Saturday morning, I met with a new dog walker for the pups.  I told her the story about Percy peeing on the trainer so she fully understood what I meant when I said that Percy is the feisty one.  Then I got some errands done before I called Zach to see if he wanted to hang out with me.  We decided to get tickets to see Jon Lovitz at 10.  Obviously, I had to take a nap as soon as I made the reservations.  I didn't feel too bad about the old lady nap taking because when we got there, my 25 year old cousin complained about how loud it was, and that no one should have to listen to that kind of noise.  When we got our seats, we were like 4 feet away from the stage.

Zach: Great, now I'm not going to be able to look at my phone if he's terrible.
Me: Yeah, you should just never do that. 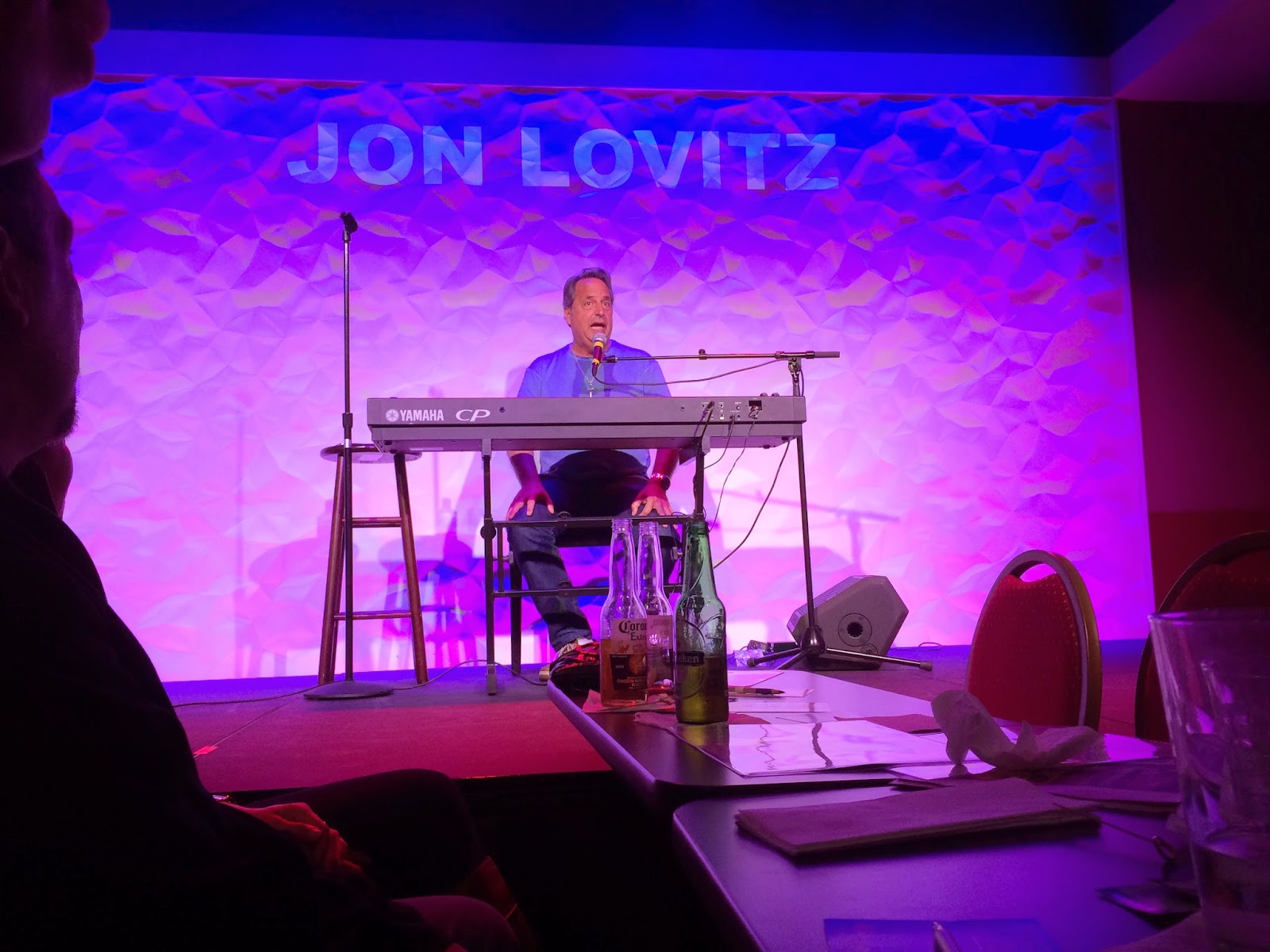 I slept in the next day, and when I did finally get up this is how cool the lake looked.  So cool in fact, we decided to jump in the pool and admire it for a while before we had to leave. 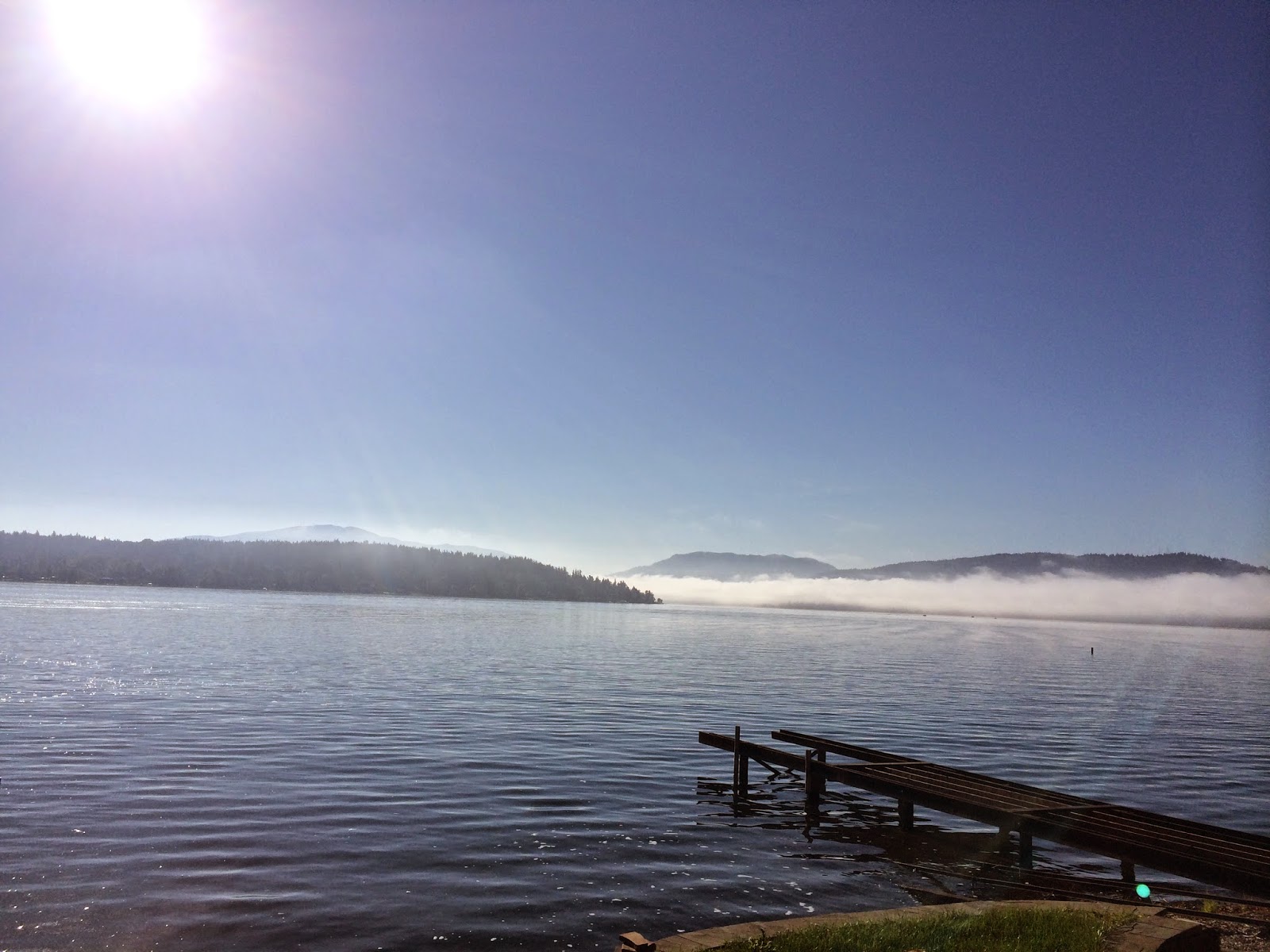 Then we went to Kent for our annual Corn Maze, Fun Day!  When I told Maureen that we were going to the corn maze, she brought up her trip to Seattle 7 years ago.

Mo: Ugh.  I hated the corn maze.
Me: WHAT?! It's only the most fun day of the year!!
Mo: No.  It is not fun.  I thought it was going to be family fun, but instead it was a competitive race! And I was left behind, trudging through the mud and darkness with Lucas dead last, not knowing if I would ever find the end.
Me: Oh man! But the racing is the best part!
Mo: No.  No it isn't.
Me: Agree to disagree.

On the way to the corn maze:

Becky: I hope you're happy.
Me: I am! Thanks. End of conversation.
Becky: No... I wasn't done yet.  I hope you're happy, now that you and Kelly are going to be gone next weekend, I'm dragging Jared to the Icelandic taste testing festival.
Me: Oh man, Jared.  You're going to hate that!
Jared: No more than I hate any other taste testing event.  Most food smells terrible to me.

He proceeded to tell me his least favorite smelling foods including Strawberries, Cantaloupe, Pickles & Sauerkraut.
Me: What are your favorite smells?
Jared: No one's ever asked me that question so I haven't ranked them yet.

We established that BBQ sauce was on the top of the list.  Also, that Becky's through closes up at the smell of hot sauce so when she is cooking it for Jared, outside on the grill, she pathetically coughs the whole time.  That right there is love.

Before we began the race, I explained to everyone the rules and asked everyone to break off into teams.  I was very surprised to see that Dr. Rach told Anders that she had to team up with me because we had been reigning champs for the last 8 years.  I agreed to let Anders and Zach on our team, especially since I knew that my lame foot was going to drag us down this year.  Nate told us that he likes to change up the rules by reframing what "winning" is.

Nate:r I like to take my time so that I can feel the power of having so many people waiting for me at the end.
Someone else: You have to be okay with losing.
Dawne: Nate is very comfortable with that.
Me: With being a loser?
Nater: Thanks, Mom.

Becky and Jared won both races.  They said it was because Jared was the corn whisperer. 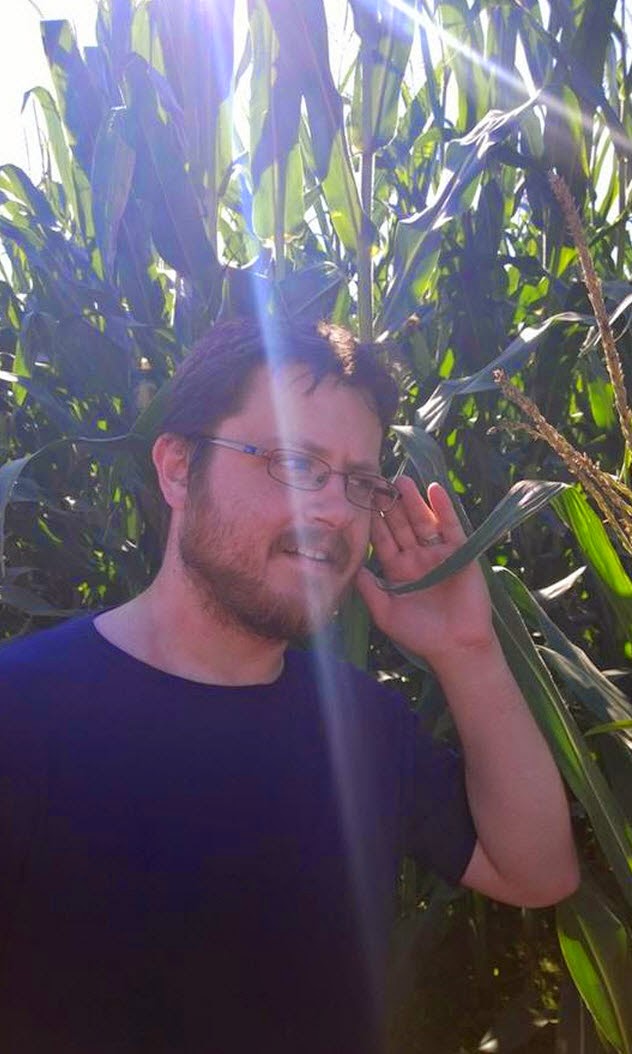 This morning, I was telling my mom the story and she replied, "Sounds like a lot of excuses to me."  And then later, on FB, my mother commented, "There was a rumor that you didn't win. Boo Hoo."  Thanks, Mom.  Dr. Rach said it was cool, b/c the real prize was going home with 80 pounds of pumpkin.

Afterwards, we grabbed lunch at Wild Buffalo Wings (still not sure how Becky was able to breathe in there.) And then I nursed my foot, watched a couple of episodes of Doctor Who with the boys, and vegged out for the rest of the evening.  And that's how I managed to get this out on time! Yeah! 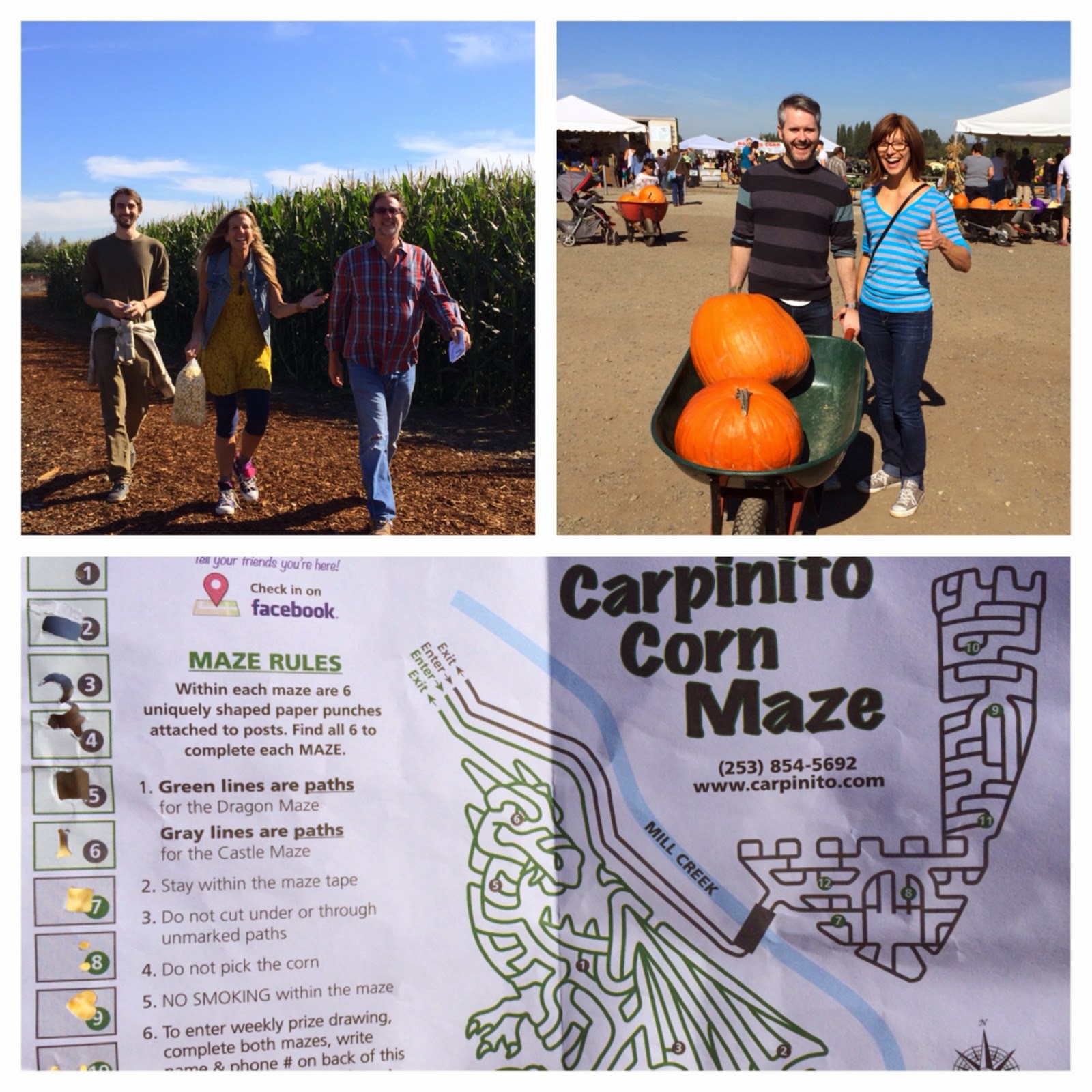 Posted by skcorynaffit at 4:31 PM