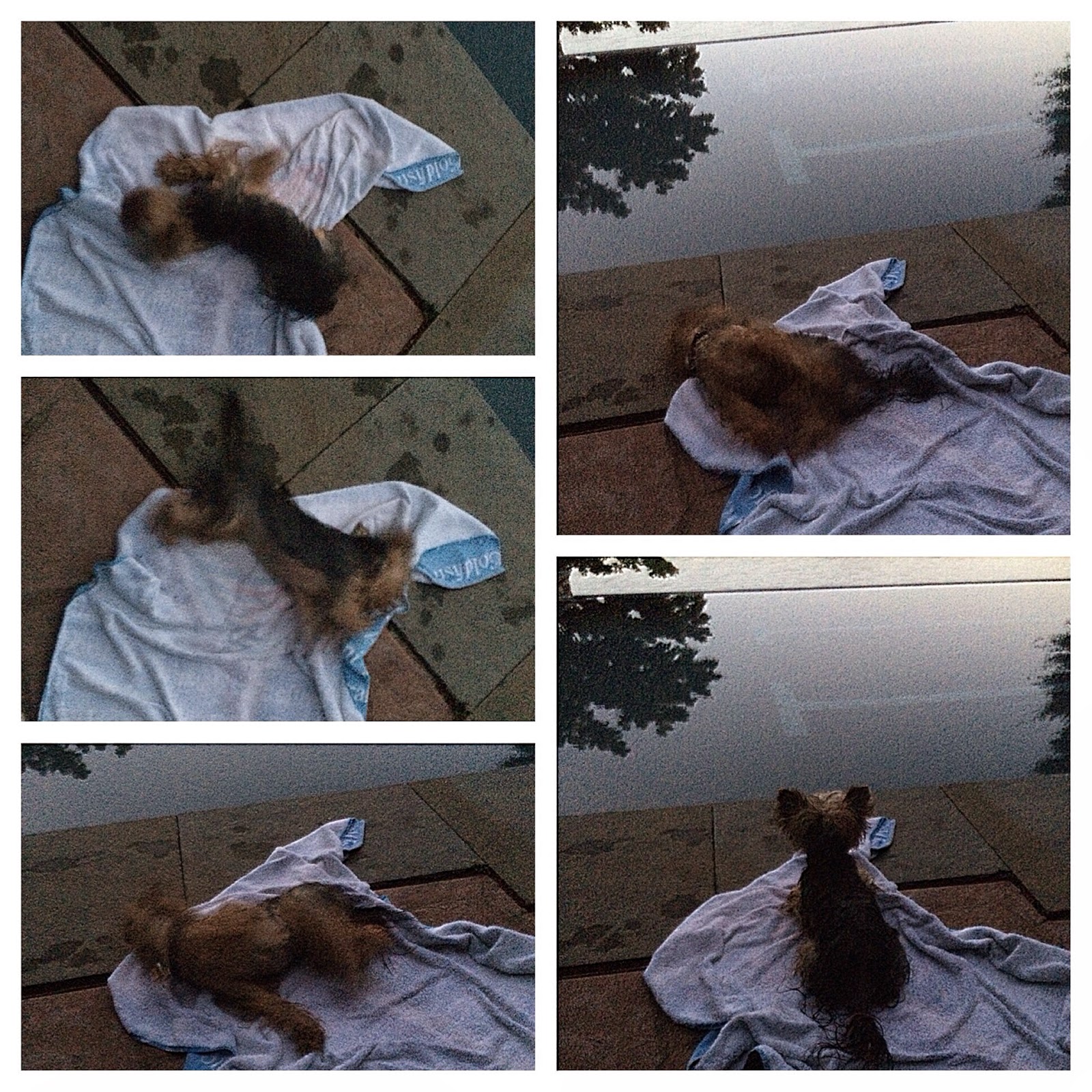 On Monday, I came home and Percy demanded to go swimming in the pool.  It's an unspoken rule between us that he doesn't go in the pool without me.  He decided to speak about it on Monday though.  Finally, I took everything out of my pockets and told him he could go in without me.  After 7 or 8 laps in the pool, he got out, dried himself off, and we went inside.  He's the coolest.  On Tuesday, I went in with him and we played fetch for 30 min straight - he thought it was a blast, and I was excited that he might be a little sleepy on the plane. :) 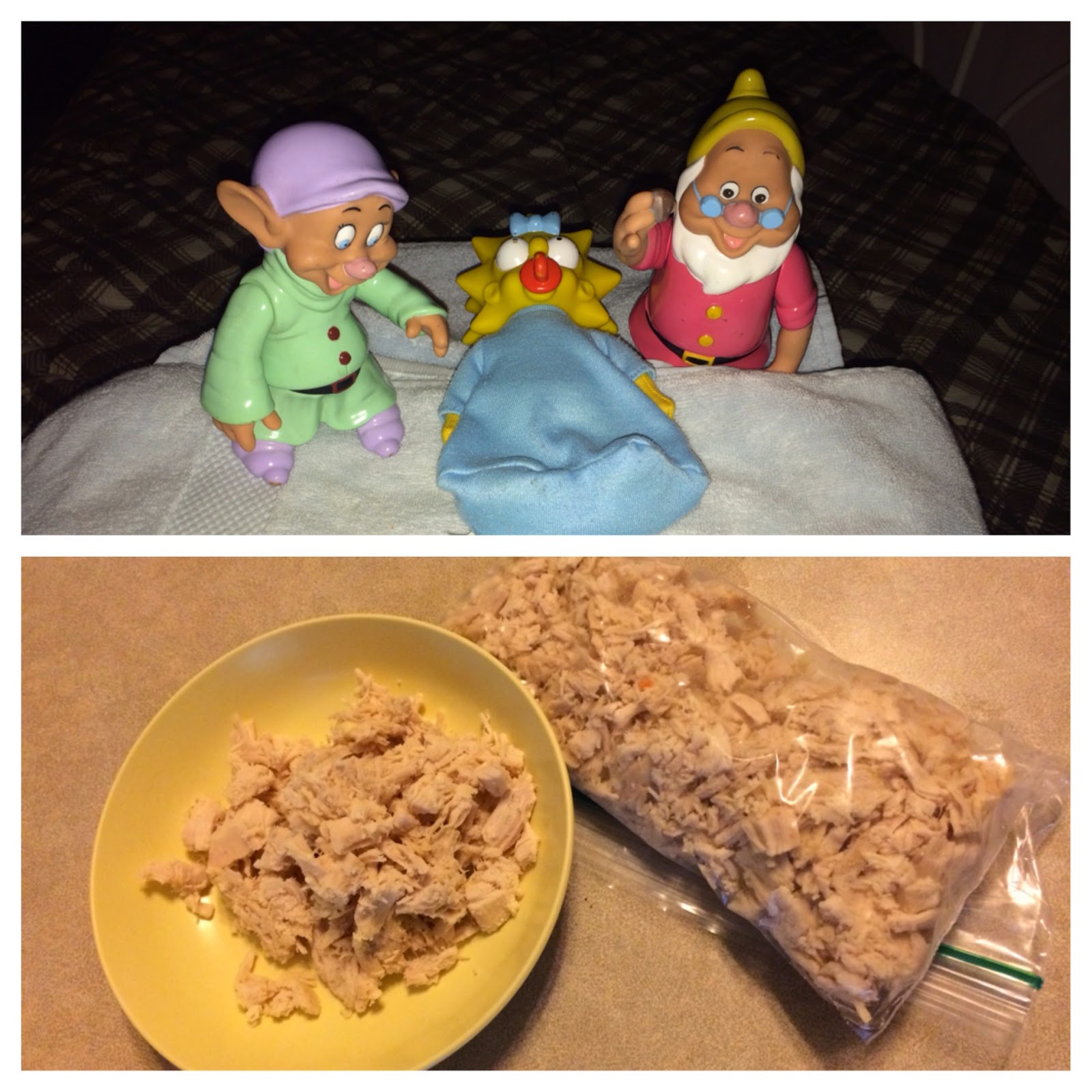 When I got home, my mom had new toys for Percy to play with and she had made chicken for him, cutting it into teeny little pieces.  Later she told me he doesn't like the big pieces, which true, but I like that I'm not the only one who baby's him. Both my mom and my dad also had wrapped birthday presents for their grand-puppy too! Wednesday, I had to work to do... but because the office didn't really open until noon, I drove up to see Debina and her babies.  Matthew looks like a mini Christopher (Deb's brother), and because I know little Chris better than I know adult Chris, it was really cool to see the mini version.  On my way home, driving back on the Taconic, I was in awe of how beautiful New York is in the fall. 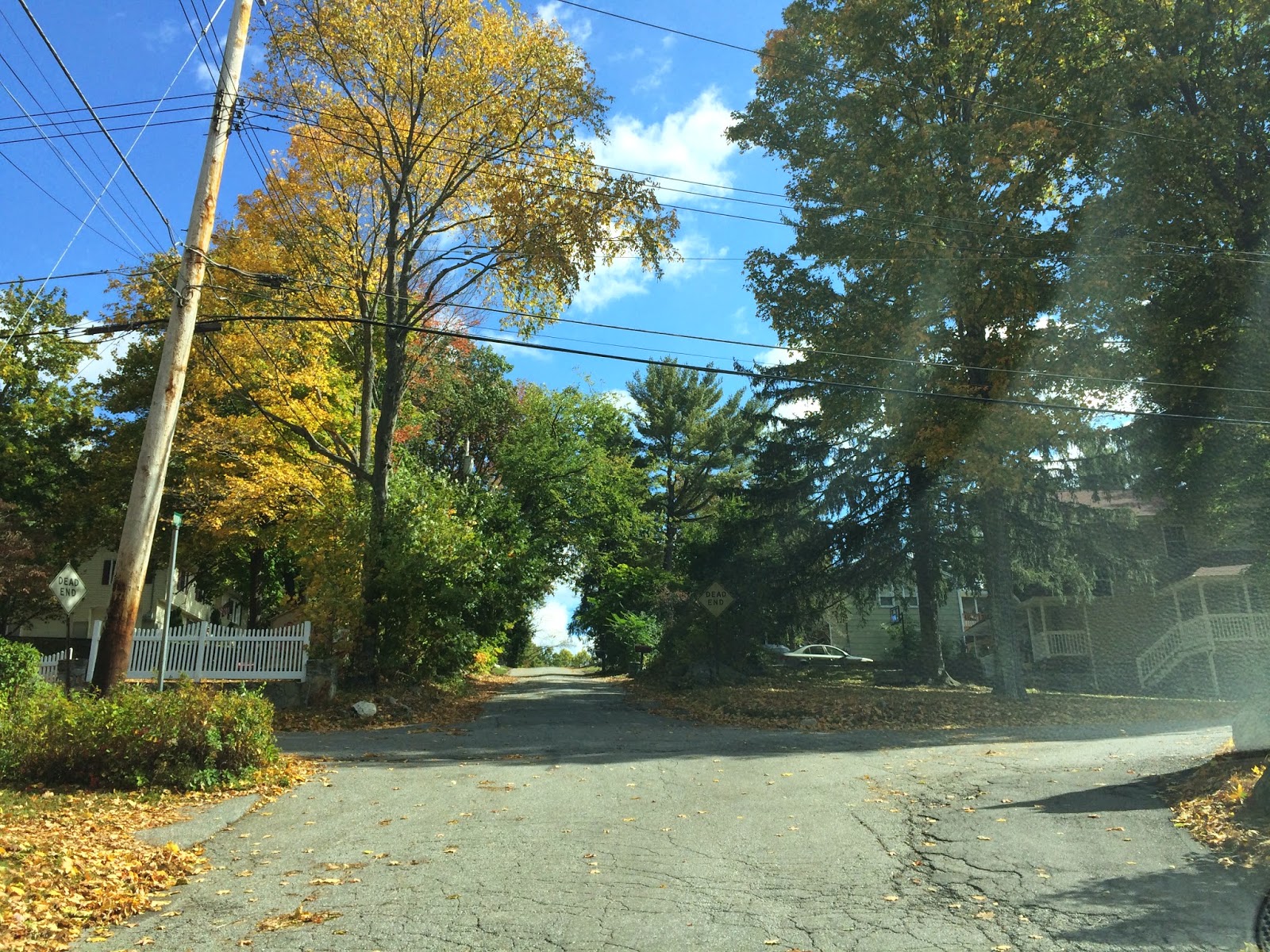 Spent the rest of the day working outside with my parents to keep me company.  Doesn't really get better than that. 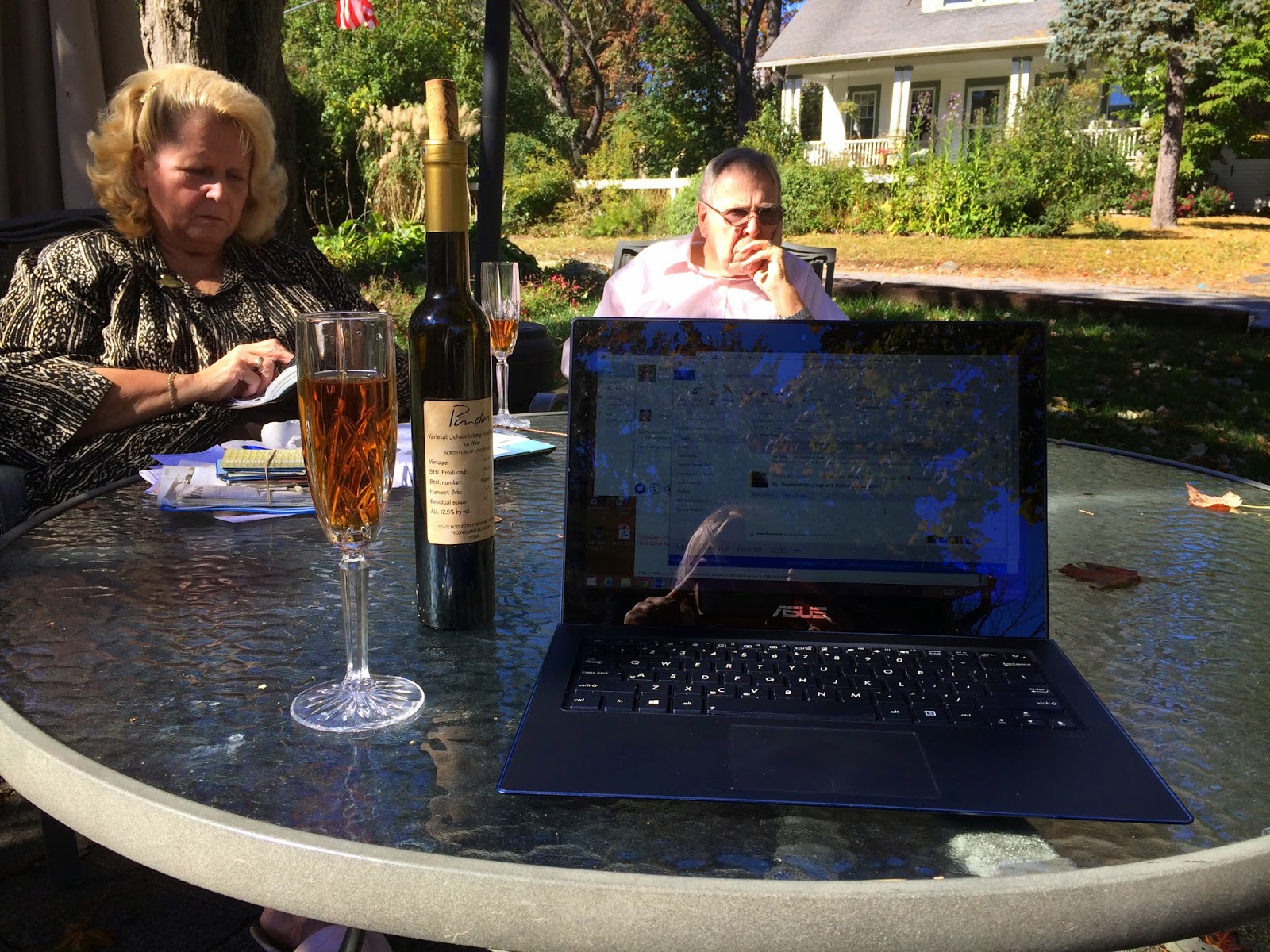 Headed down to NYCC for a couple of days for work.  I was super grateful that I just had meetings and didn't actually have to set up a booth.   And I was also uber grateful for uber because I am the worst at getting a cab.  (Remember that time a Canadian told me I needed to be more aggressive - and then took it back and told me I was better off just getting a cab at a hotel?) 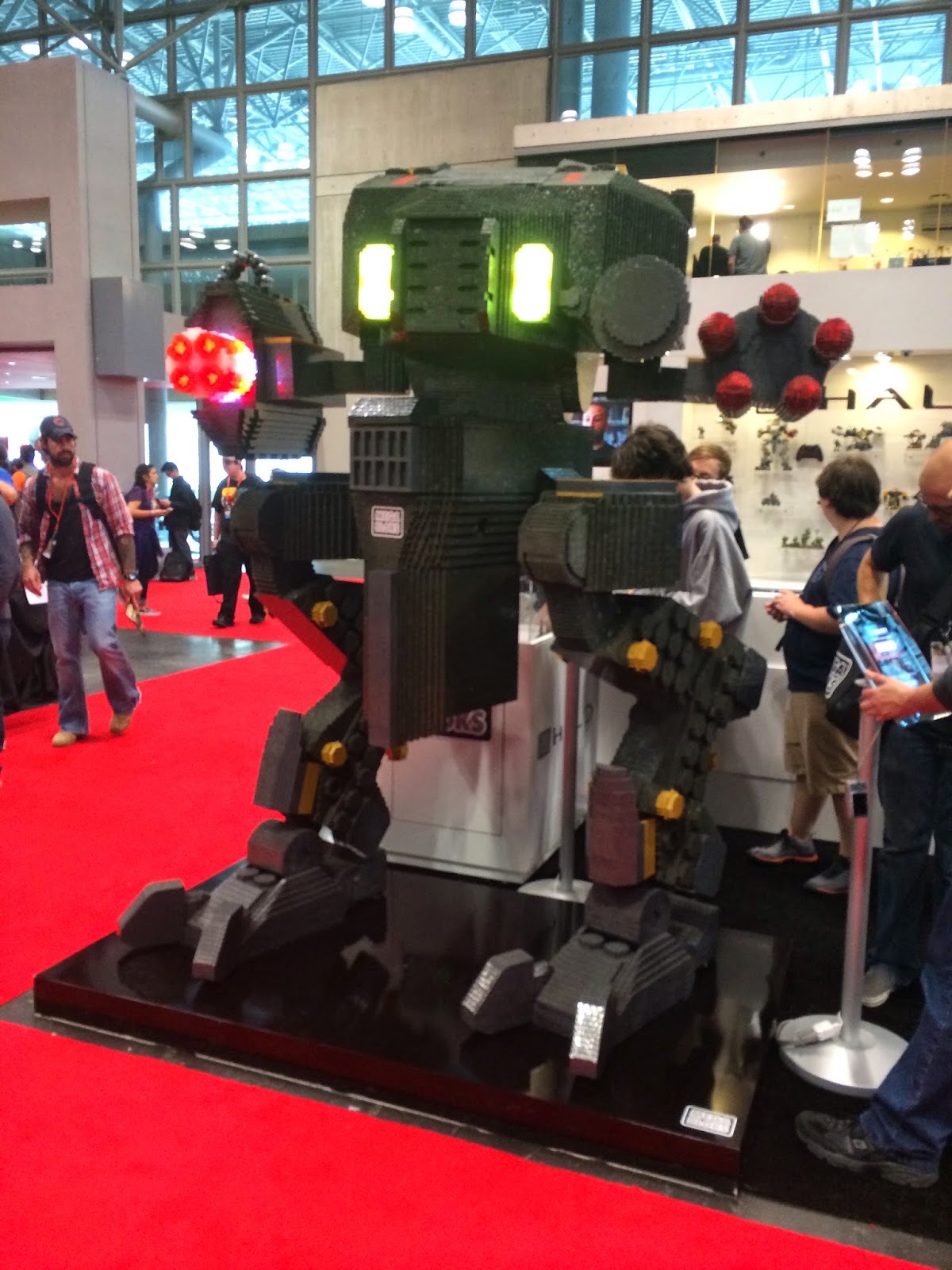 My co-worker and I met up with a couple of his friends at this shuffle board bar in Brooklyn where they had this gourmet grilled cheese food truck inside the bar.  And because I hadn't eaten all day, that grilled cheese was super-duper amazing.  As if that wasn't good enough, James' friend was in three episodes of the Gilmore Girls!! EEK! 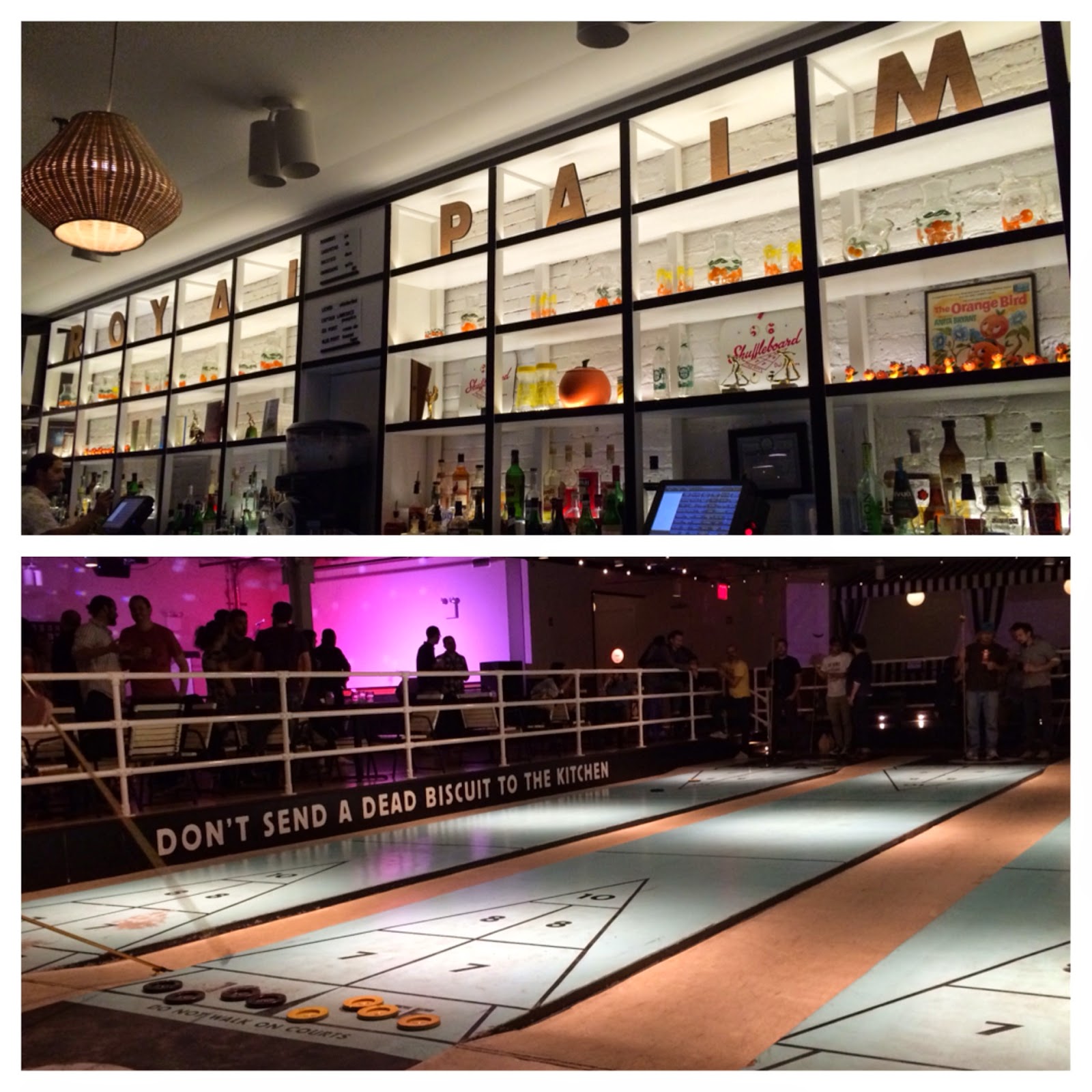 One of the members of upper management went to the convention, and because I don't want to get into trouble when I quote him, we'll call him Sam.  Sam got the show, and immediately got some Pokemon items for his kid.  This meant that he had to carry around a shopping bag.  Before we left for dinner, James offered to up a different bag to Sam, which he accepted, but had to dispose of the cheap shopping bag first saying, "This bag is so offensive that I don't want any part of it."

While Sam was doing a signing, I was communicating with the office trying to get some assets approved.  In order to do this, I had to email a somewhat urgent email to all of upper management.  Sam stopped mid-signing to reply, "Ask my face!"  Whoops!

When we were waiting for a table at dinner, we stepped upstairs to the rooftop bar.  I still had my backpack on, and made a comment about how uncomfortable that was.  Sam replied, "Yeah, and you're double strapping it so you look like a doofus. I did that once and it was comfortable and easy, so naturally I never did it again."

Our partner also told us a super in appropriate story that you'll have to ask me about in person.  We went to a bar though that had a room with a ping pong table.  The guys we were with informed us that no matter who played in there, they ended up hooking up by the end of the night.  It must be a magical ping pong room!  The rest of the restaurant was also pretty magical, but in a different way. 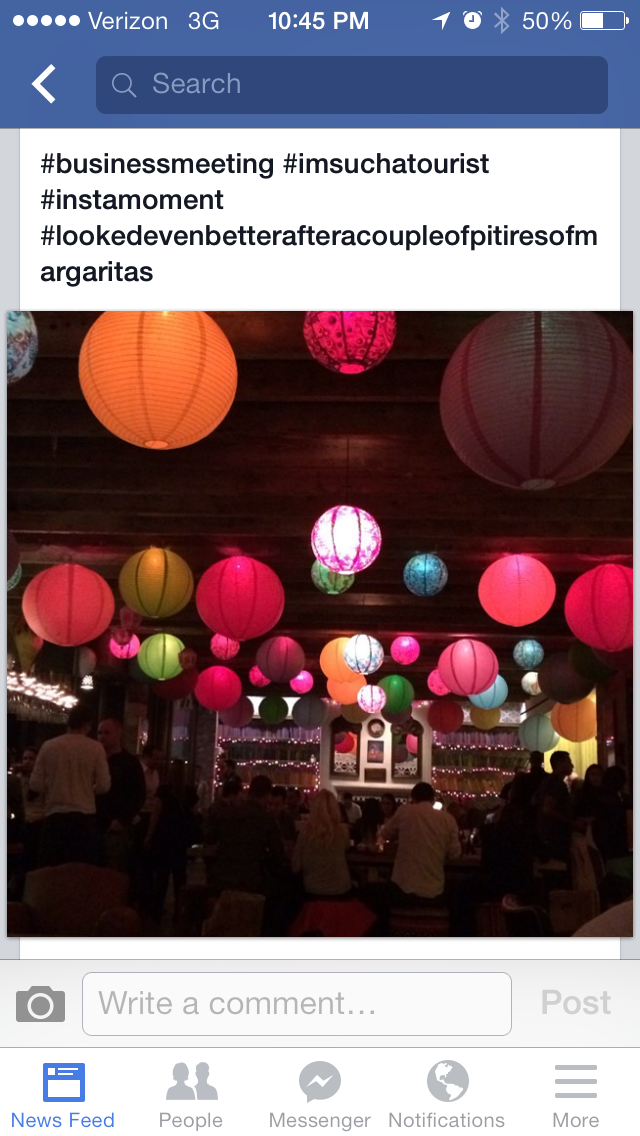 I went home after a couple of days in NYC.  Percy became attached to my parents, especially my dad who was taking him out all the time.  Percy also made my dad open the car up every time they went out so he could check to see if I was in there.  Maureen and I went to Stew Leonard's.  Mostly, for funsies, but also to pick up a couple of things for Stacey's party.  I asked Sean what he needed.  He said he wanted brats, but that we shouldn't get them. And back in forth until he proclaimed, "Definitely no brats" to which Mo responded, "No brats? Does that mean that Patrick, Kevin and Kyle can't go?"  Sean said, "Only if you soak them in beer." 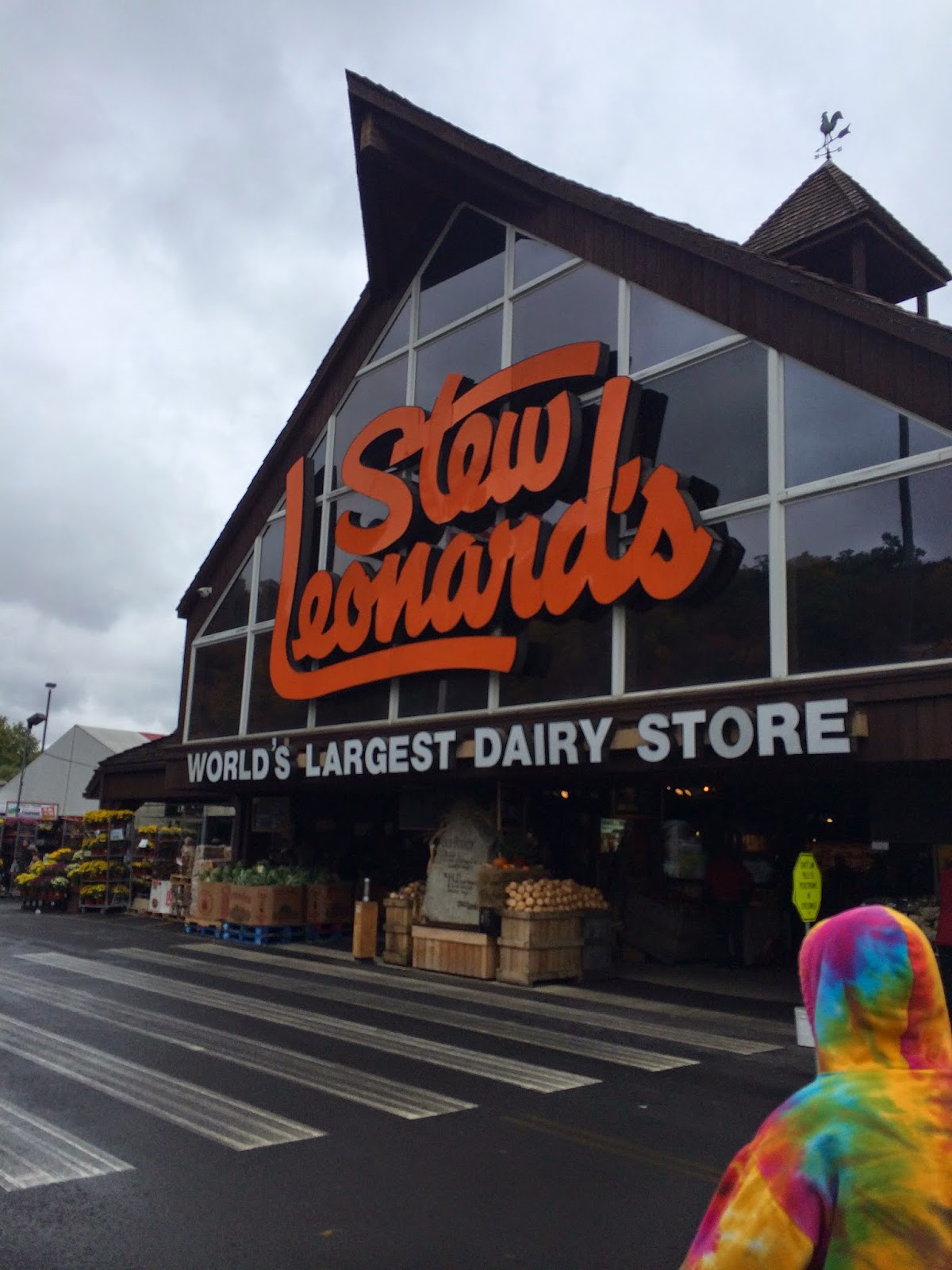 And momela made me ham! 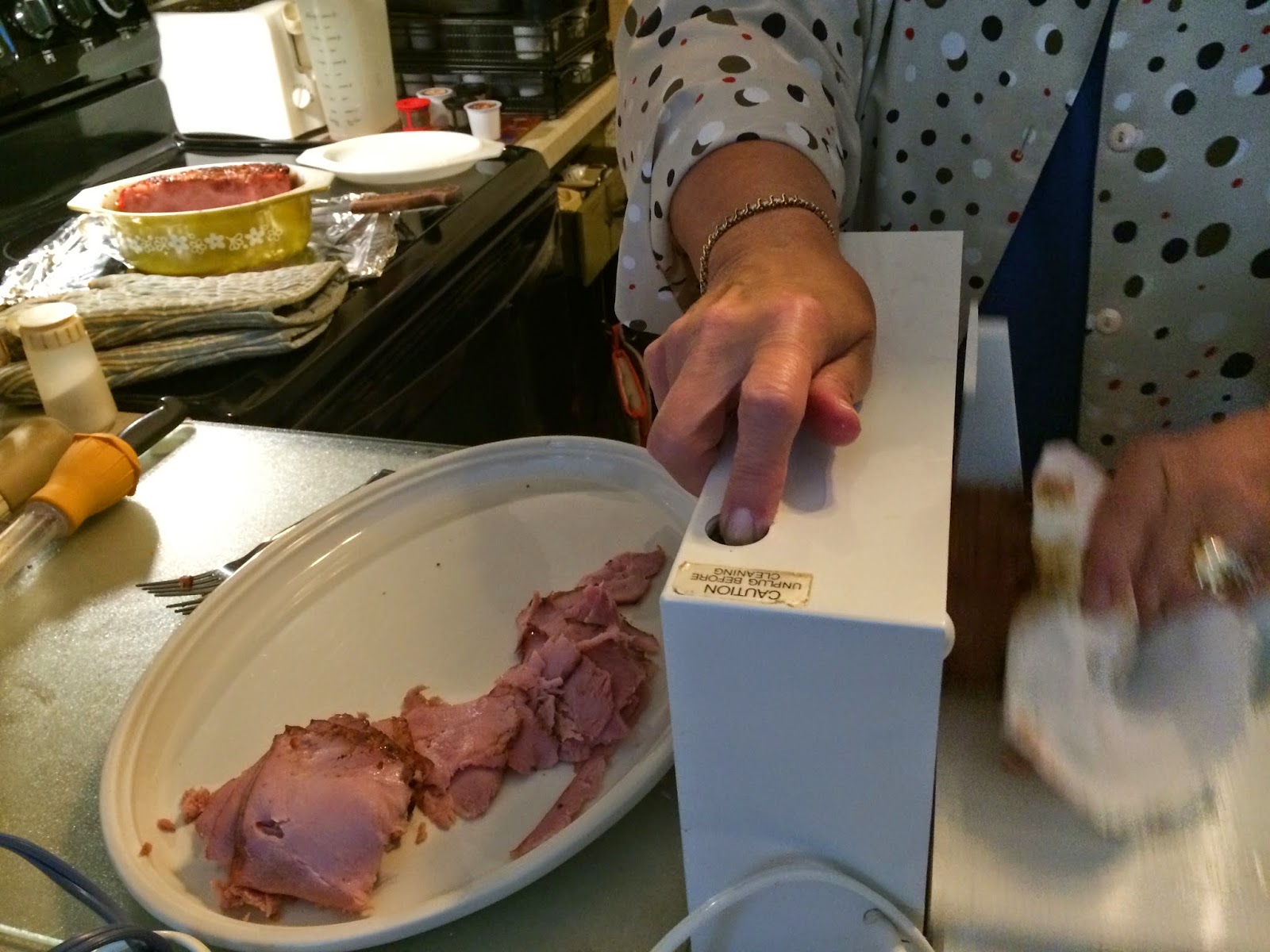 While I was in the car with Maureen, I noticed that Kyle's screen saver was a picture of my oreo tasting party.  Mo's family all share the same iTunes account, which means my 365 grateful feed goes to the whole family.  This is how Kyle got the Oreo picture.   When I made a comment about it, Patrick said, oh yeah! My screen saver is your friend Eva's kid [Freddie] giving the finger! 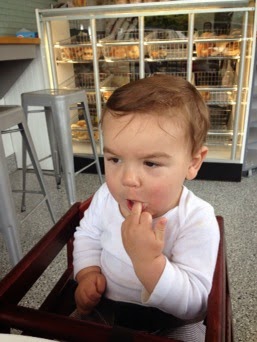 Briana & Austin were able to make some time for me also, so we went for a little walk.  I was so pleased to see how happy, content and comfortable she was being a mom.  Not that I thought she wouldn't be, it's just that everyone seems to take the whole parenthood role on differently.  And since I'm not a mom, but I have a lot of new mommy friends, it's nice to learn what works for everyone.  I'm taking notes ladies!

Speaking of which, we had a little mommy conversation while we were at Sean and Stacey's.
Carla: Bails, can you just have a baby for me?
Mo: Tiffany offered to have a baby for me once!
Carla: See! You were going to have one anyway.  Just have an extra one for me. I think adoption looks really good on your college applications.
Bails: ----
Carla: Our nieces said that they really want to have another cousin.  They made me a deal that if I got knocked up, I could have the baby and leave them in the spare room, and they would help raise it for me.
Bails: Tiffany, you could have a baby too, you know.
Me: I'll give you a cousin at the first opportunity.
Bails: Really?
Me: Same deal though, right?
Mo: Yeah, that doesn't seem like something you need to clear through, Stacey. 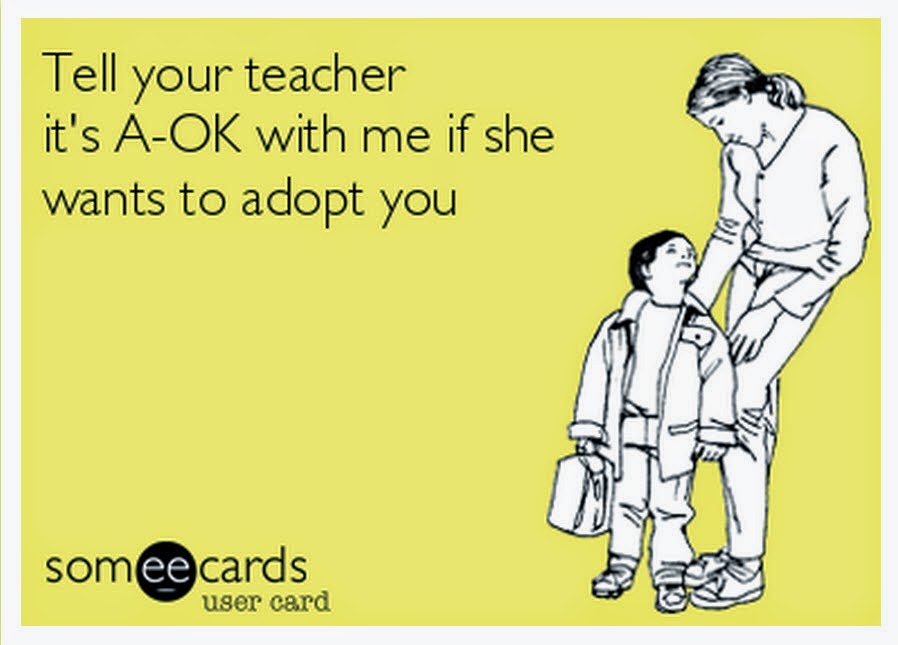 Carla: I have an unhealthy love if Taylor Swift's "Shake It Off." I'm kind of embarrassed about it.
Me: No you're not.  That's why you're telling us about it when we weren't talk about music at all.

Carla and Stacey got some bad news at one point in the party.  My solution was to make Stacey and Pat open their presents immediately so that we could play Telestrations.  Before we sat down to play, I said I needed to run to the restroom, because we were going to laugh real hard.  Carla replied, "Oooh! Pee your pants worthy game!  I can't wait!"  Here's how Bails turned baby shower into (Awkward) Biohazard Emergency Shower 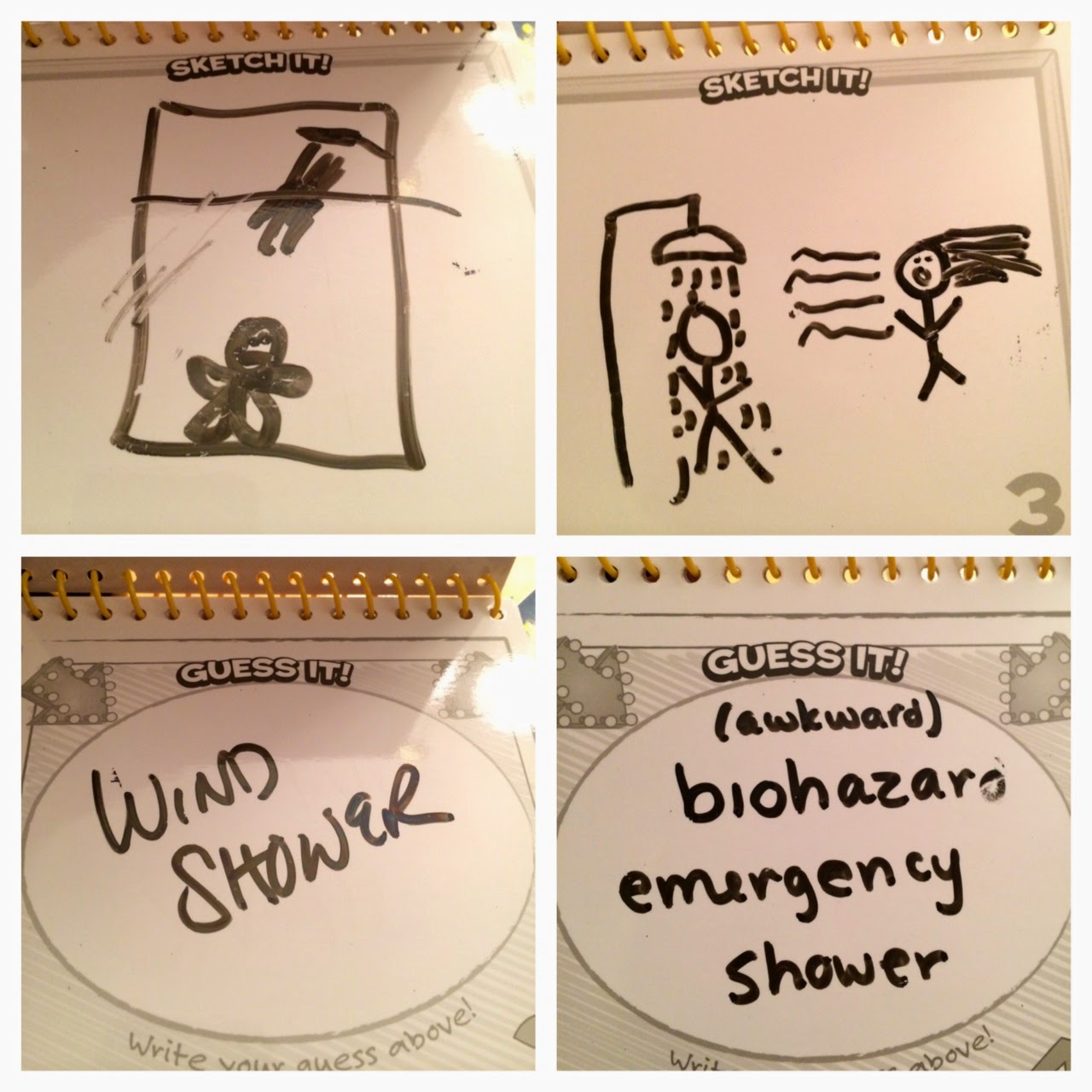 Bailey's Friend: I haven't slept well for a week.
Me: Why?
Bailey's Friend: Because I haven't been able to sleep in my own bed.
Bailey: Oh.  I slept 'til ten.  I only got up because my mom made me.
Sooo supportive.

We were talking about different types of haunted houses.
Carla: Sharon and I have bought tickets to one haunted house every year for the last 5 years, and have never actually gone.
Jeanine: There's a haunted house in CO that takes 4 to 7 hours to go through, and only one person is allowed in at a time.  But it's free!
Yeah, sign me up for that one!

We were commenting the new ottoman in the living room.  Sean said, "Oh yeah! Someone was moving.  I asked if they had an extra ottoman, and when they did said I'd take it!"  Stacey, of course was amazed and appalled that he agreed to take it sight unseen - and that of course it matched perfectly.

On my last day in NY, I met up with Evivova and Freddie at JV Bagel.  She said she could only meet for an hour b/c they were scheduled to go to Gymboree.  When I told my parents, my dad asked me how much it cost to go there.  I told them that, knowing Eva, she was probably going for free.  Turns out, not only was I right, but she was going for their 4th free "trial."  Some things never change.

Three more of these and I'll be caught up!

PS I'm totally leaving the time that Beth told me that her dog was cuter than mine - for obvious reasons.
Posted by skcorynaffit at 2:50 PM