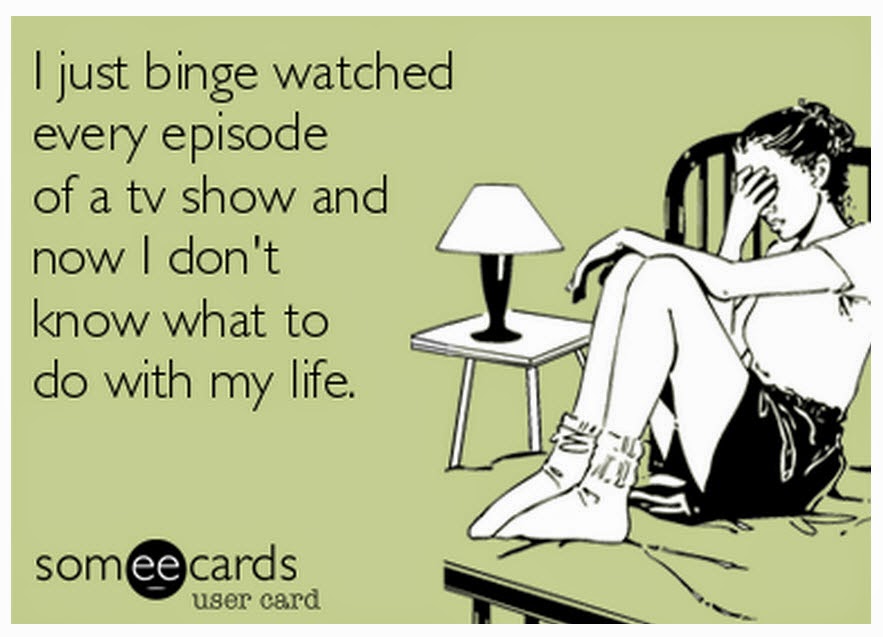 I started watching a show that I knew from the beginning that Zach and I would love to watch together.  It was a cross between Smallville, Eureka, & Lost Girl, and I loved it from the very first episode.  I thought, "I should wait for Zach to watch the rest of this." And then I thought, "Naw that jerk left me to go to Germany for three weeks.  Imma watch it right now." And I did.  All 4 1/2 seasons in fact.  This means that while I am actually behind in my updates, I have very little to update you on beyond plot points and that Lucas Bryant is dreamy.

When I got back to from NY, I found a tick on Percy so I had the pleasure of removing said tick.  I gotta say, this little guy sure knows how to be a brave boy. 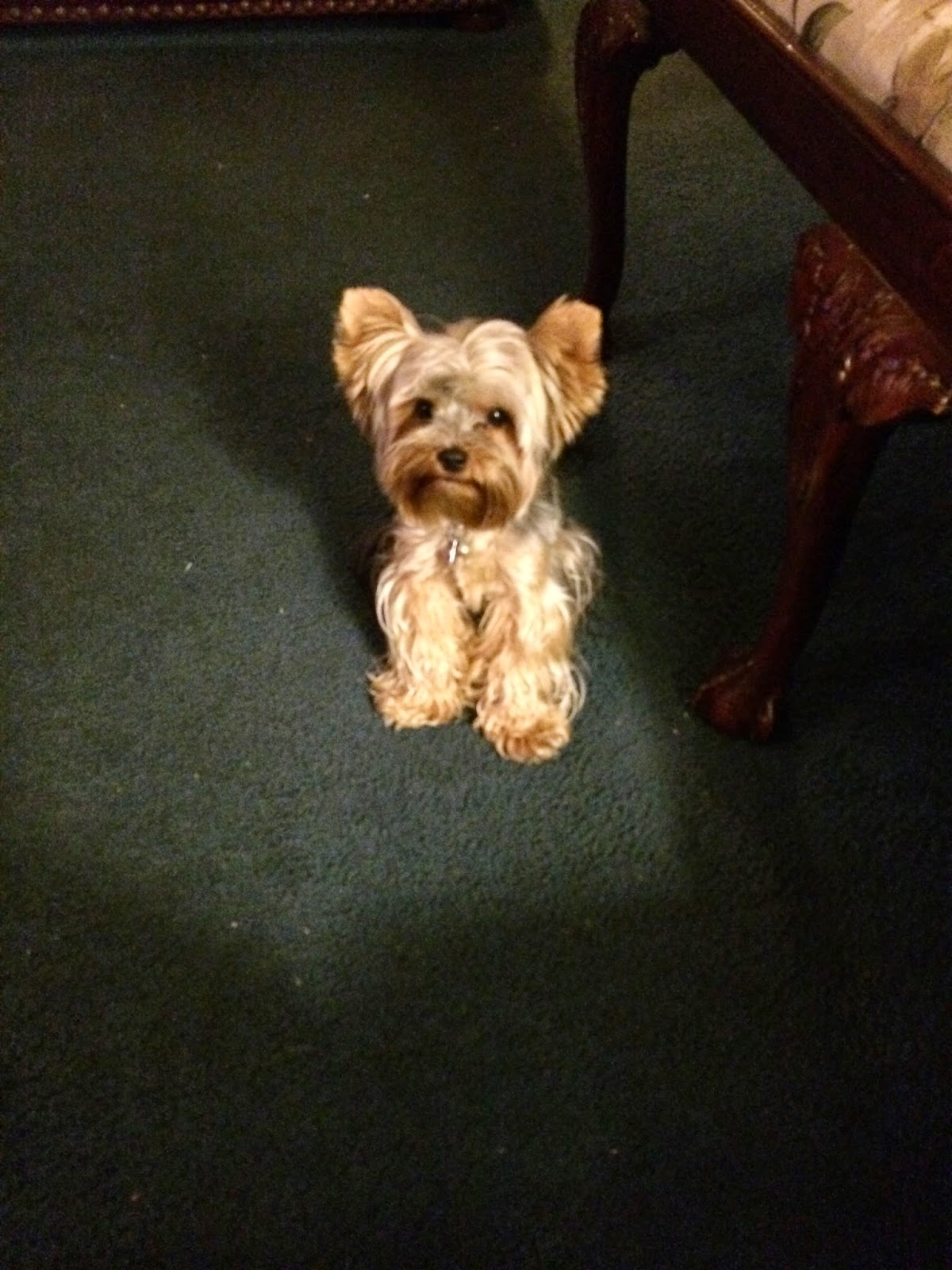 On the same day, I saw this lovely conversation between friends that I thought you'd enjoy: 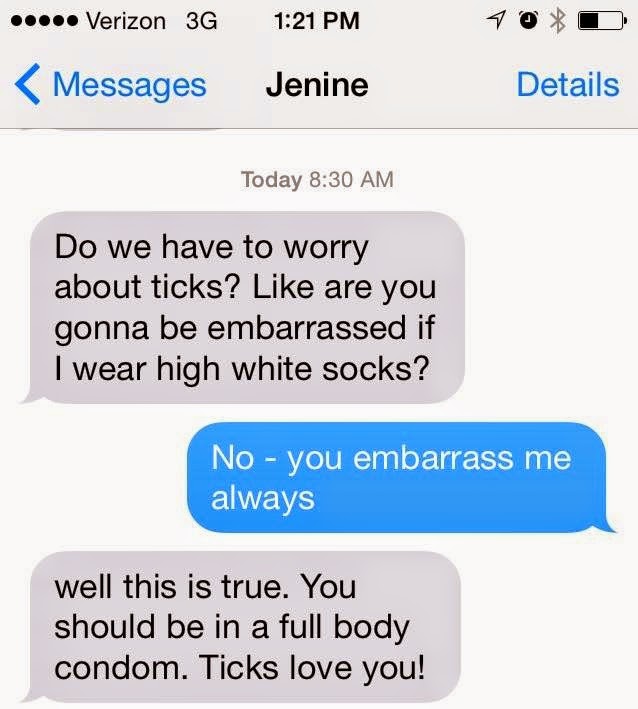 Looked behind me at work and saw this.  Ryan: I wanted to be a part of the conversation, but I also wanted to get some work done. 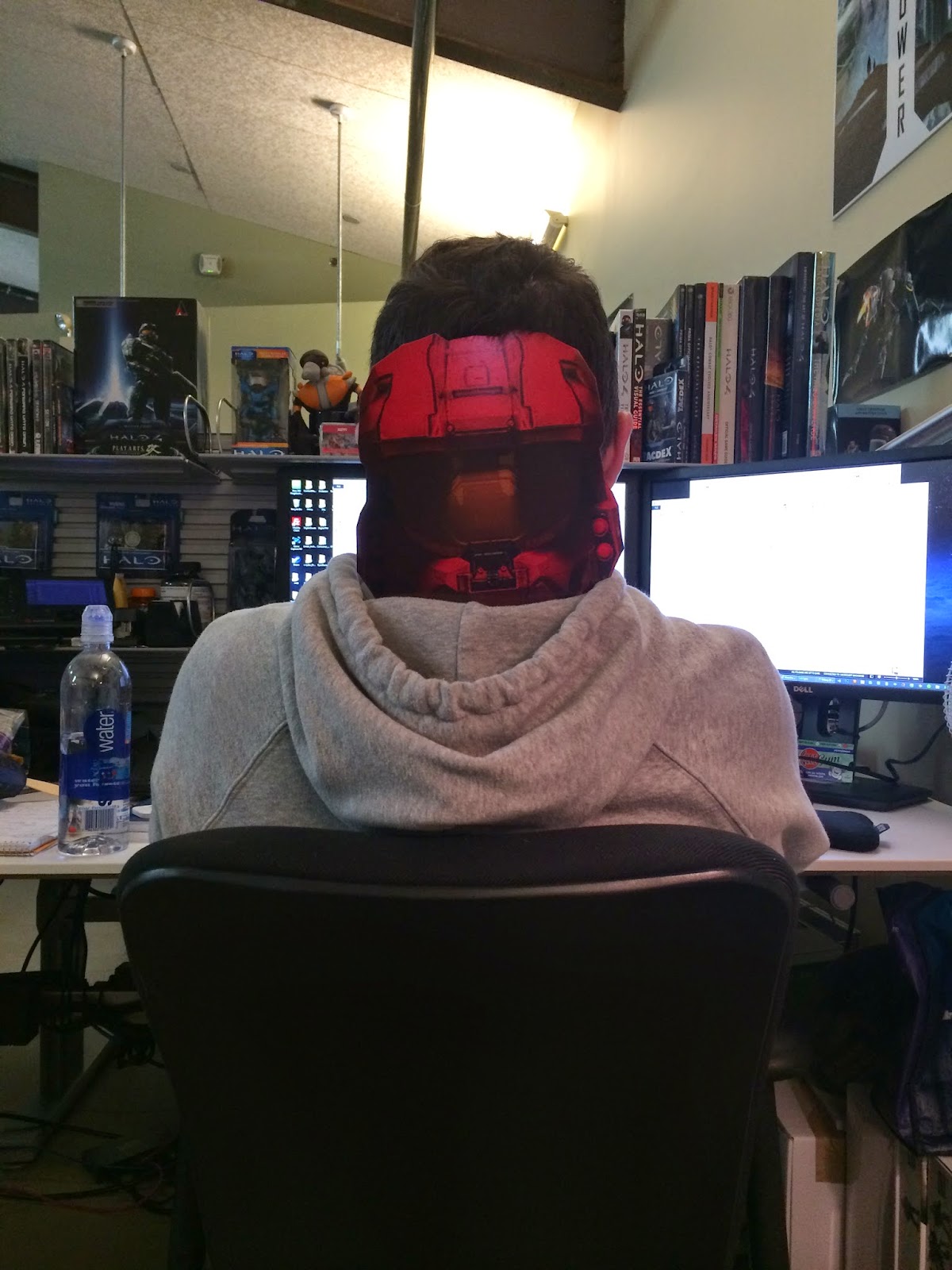 On Wednesday, this is what I walked into the office at 9 am.  Then I moved a couple of beers over to get to a coke zero.  Ah the life of a game company. We got together with Rollie, Matastic, Ryan and Kelly.  This lunch is planned once a month, but we really get together every 4 or 5 months.  Planning is clearly not our strong suit.  Or maybe we are just so dedicated to our work that leaving for lunch is too hard.  I wish it was just a planning problem.

Kelly was telling us a fun little dating story that involved a little bit of intrigue and facebook sleuthing.
Matastic: Wow, you're like a detective, Kelly. Are you sure in the right field?

I agree, she's quite good - though it sounds like Matastic comes from 1 part being happily married for several years and 2 parts Kelly having some FB dramatic college friends.  Either way, we learned a lot that day.

Me: How's parenthood going?
Rollie: Good.  I know a lot more about girl’s anatomy now.  Especially now that I need to protect rather than [banged the table.]

Rollie: My mom asked me if I would change her name.  Like the first thing she said to me after I told her that Ava was born she texted me, "That's nice, but wouldn't it be better if it was spelled Eva?"

On Saturday, Dr. Rach and I went to Becky's tea party.  Okay, it was more of a charity event at Becky's church, but there was a contest for best table, which Becky totally won!  There was a style show that I learned nothing from.  I'm not saying that it wasn't very helpful, I just don't like being told what to do. During the silent auction, Dr. Rach and I kept a very close eye on our bids.  I felt like everyone else at the tea party wasn't taking the auction very seriously.  That's when I lost a little respect for them, and then rechecked my bid.  Both Dr. Rach and I both won; my prize was handmade cards from Becky that I have every intention of sending to here with a note on the back "Made with love by Tiffany." 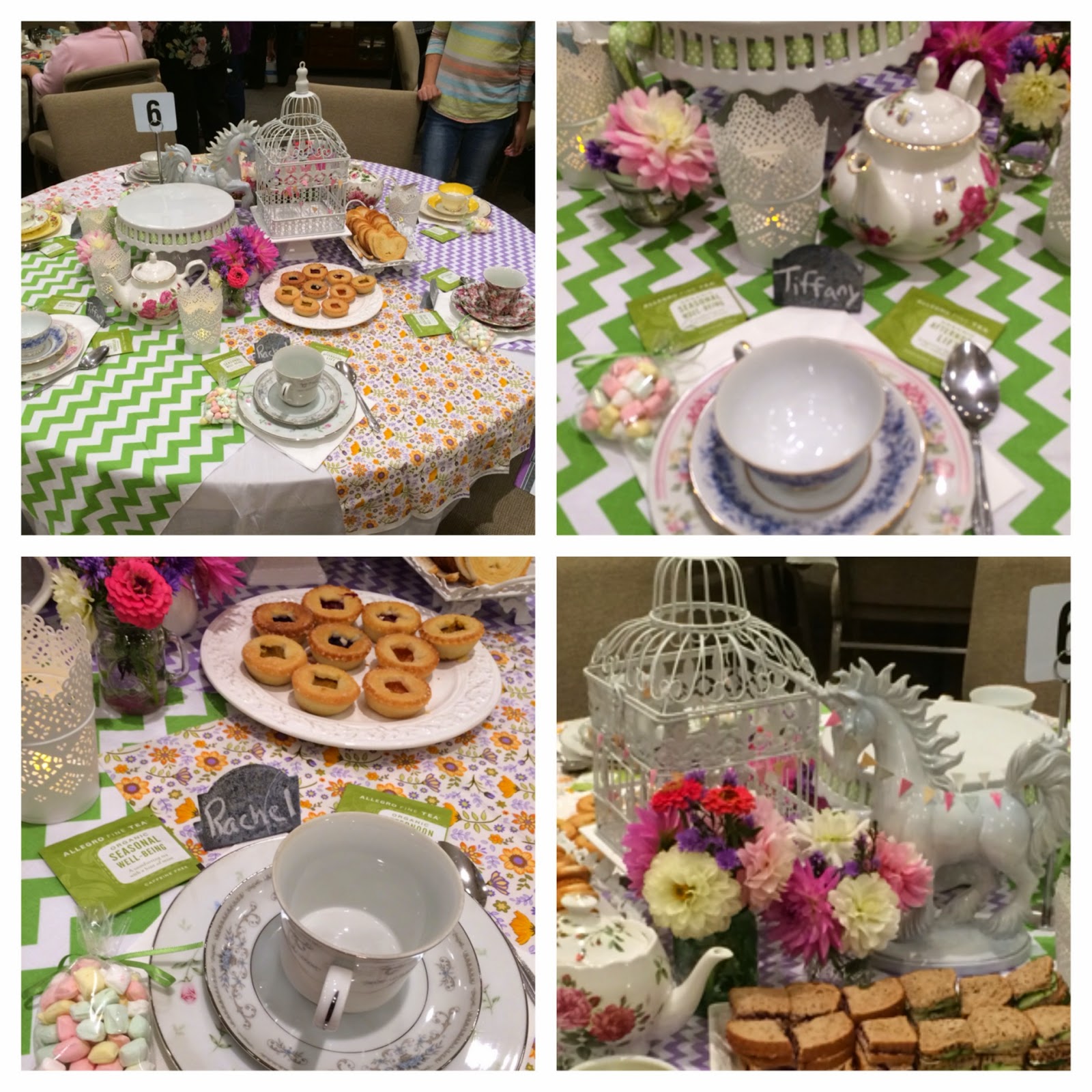 On Sunday, I went over to Doctor's house and made cookies!  We also watched the Addams Family.  I was really thinking about dressing up as that fake German chick with the terrible accent.  Mostly, b/c I loved the idea of talking like that all night with the added bonus that I would be a character so obscure, not even I knew who I was. 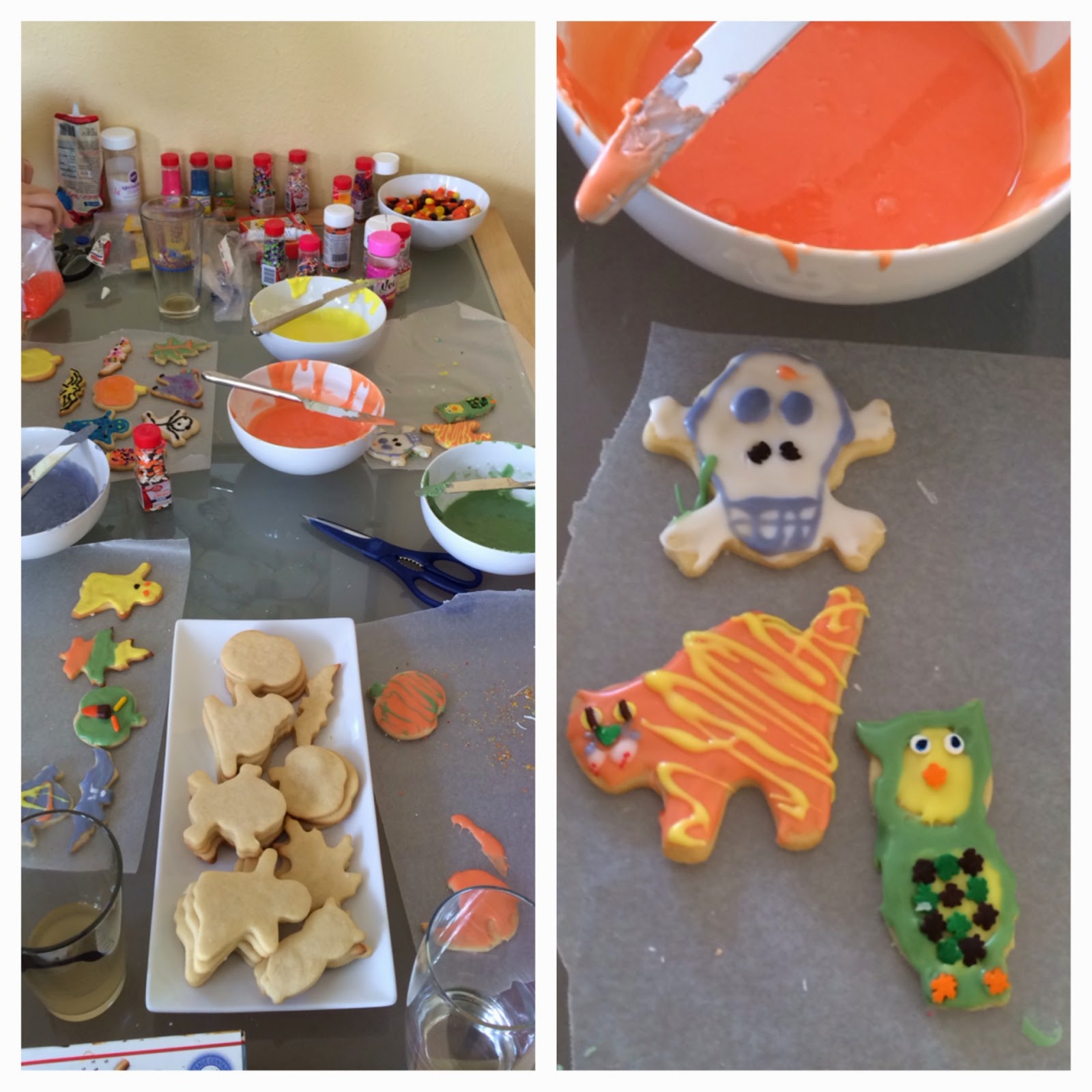 I'm saving this story for last, even though it happened early in the week.  I was getting the pups all situated in the morning, grabbed my stuff and then called Casper to get into the car.  This is when I realized that he had a diarrhea problem that had spread all over my car.  I pulled him out of the car, and took him inside.  I changed my outfit quickly, yelling at Casper not to jump on ANYTHING.  Then I lifted him into the sink for a butt bath, followed by trying to get him relatively dried off.  Next I needed to wash and disinfect the car, which is when Casper and Percy ran outside and up to the neighbors to bark.  When I got them back into the house, Casper kept trying to eat the treats out of the puzzles I left for the littles, and by the time I got it all figured out and Casper back into the car, it was like 30 minutes later.  Frustrated, grossed our and a little exhausted, I called my parents.

So, I tell him my lengthy Casper story.

Frita: I know what will make you feel better.  I was looking around in the Pantry and I found some creamer from FoodTown.
Me: Food Town?  I can't even remember the last time I saw a Food Town.
Frita: Yeah, well, it had an expiration date of '95.
Momela: Let me see that.  The copyright is 1984!
Frita: I tried it, it tasted fine.
Me: Frita! You don't even like creamer!! 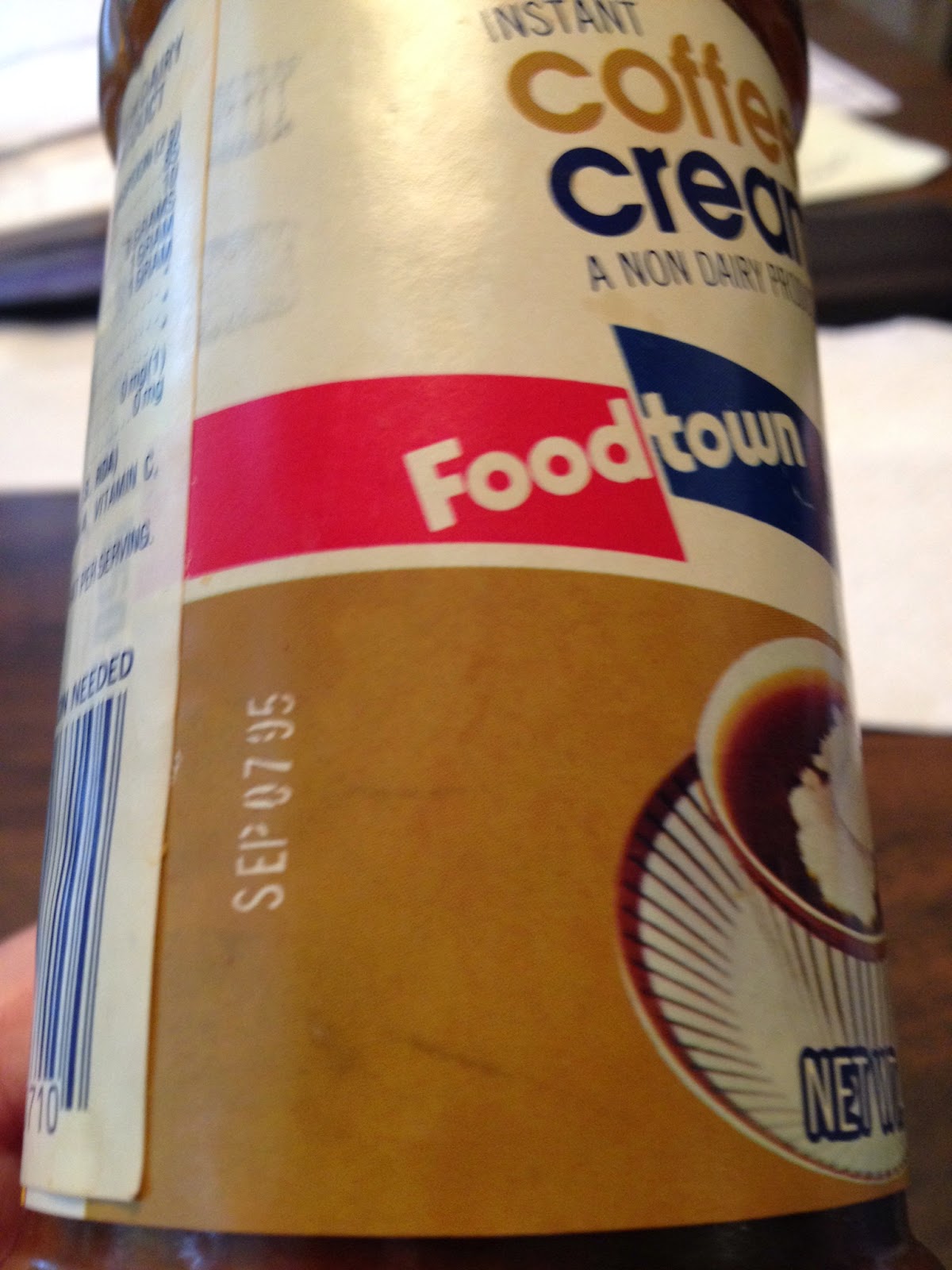 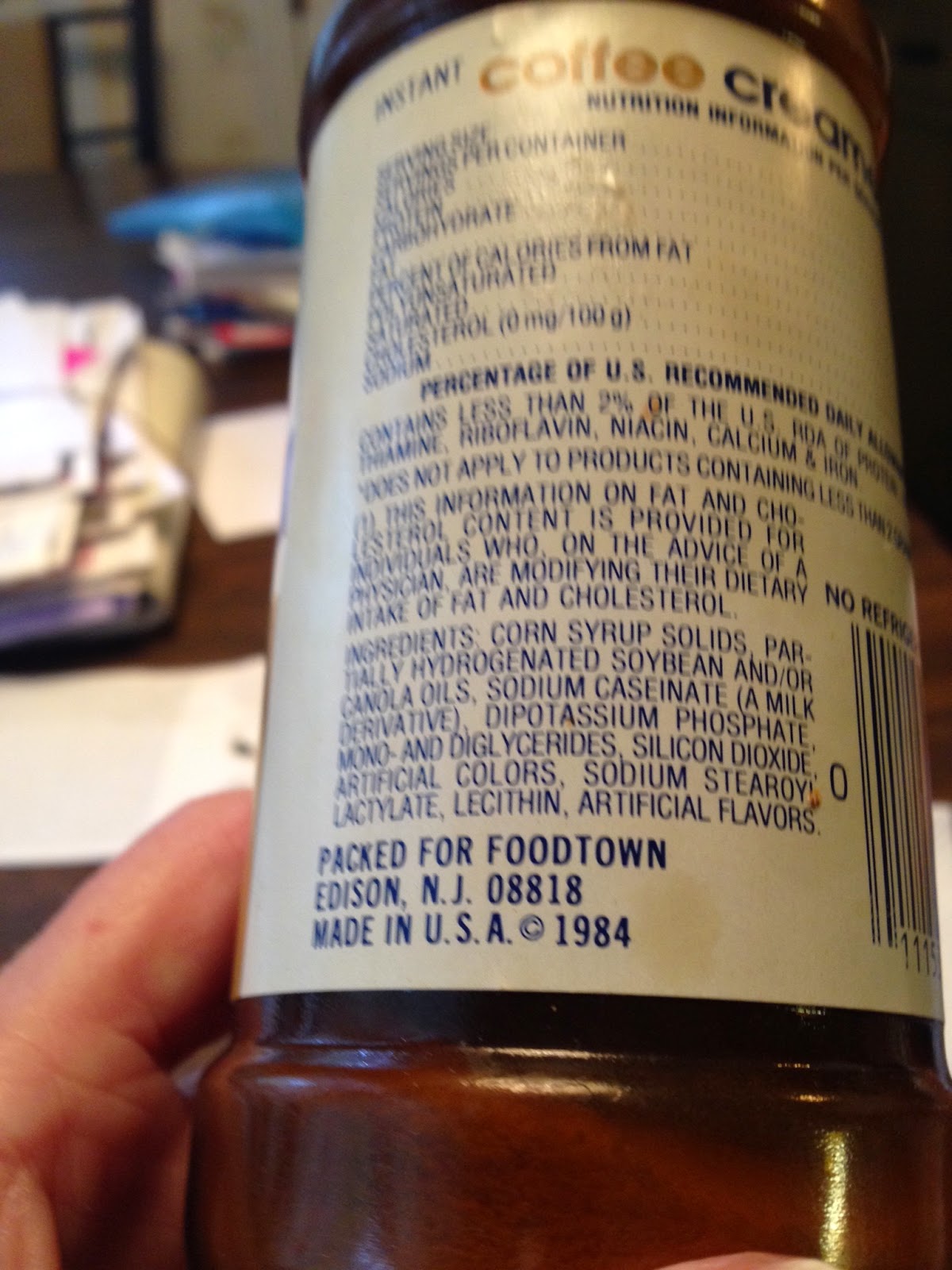 Waste not, want not I guess.

Posted by skcorynaffit at 4:06 PM