6/22 - 6/28
We spent a lot of time at the park and in the pool this week.  And then sometimes, we just looked out at the lake in peace and tranquility. 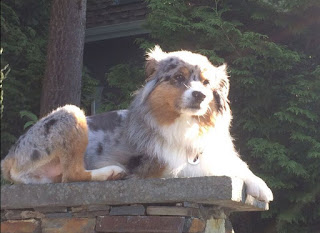 My Amazon is now recommending "Defiance" for my top picks - thanks Kelly! (Who am I kidding, I would probably have gotten to that point eventually on my own.) 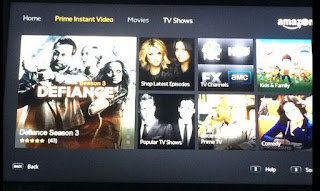 Uncle Ray found the brochure from when he was accepted into Stanford. Check out those tuition prices! 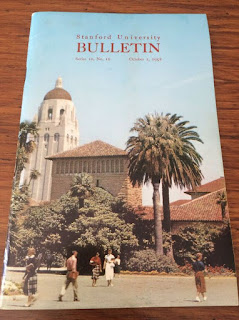 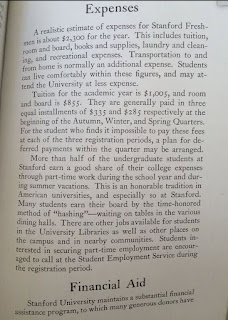 On my co-worker choosing a car.
Me: You're a little fickle.
Co-Worker, outraged: Have you just met me? I'm a lot fickle!

Co-Worker 2: Hey! We're on a work email together!
Me: I know! So official.
Co-Worker 2: And neither of us have any action items.
Me: Managering

Co-Worker 3: Are you going to see Magic Mike 2?
Me: Probably.  Although the first one had a little more story than I was expecting.
Co-Worker 3: I know! I told my wife if I was a woman I would have asked for my money back.

I went to the eye-doctor for the first time in 3 years.  She had moved locations but I found her.  When she asked about it, I told her honestly, "Yeah, the last time I was here I scratched my cornea and you didn't yell at me, so of course I came back."  She had her assistant do the initial tests on me, one of which required them to touch my eyes 12 times.  That didn't go over well with me and I may have remarked, "I don't even KNOW you - you expect me to trust you to poke my eyeball?"  So maybe they'll be okay if I don't come back for another 3 years.

My appraisal came in for my house this week (lower than my offer), and I went from content, to crying, to absolutely livid in about 12 hours.  Jason must love working with me!  The good news is, I got the price lowered AND they are moving out a week earlier.  Yeah, buddy!

I met up with Kelly for drinks on Wednesday.  I picked up the pups from daycare and dropped them off at Kelly's house before walking down the hill to Kirkland.  When I met up with her I explained that trying to get out of the house was a lot like that time we put them in the Blue House. (http://www.sweetandsarcastic.com/2014_06_01_archive.html) We had a long talk over apps.

On Thursday, Corrinne and I invited people out for a team event at Flat Stick Pup.  I think people had fun, even though mini golf was supposedly 3 Par at every whole, but there is now way.  I was cheating and I put down 6 par on each and still felt like a winner.

I woke up on Saturday having every intention of finding a relaxation station.  I went to 7 different stores and didn't find anything.
Me: Ugh.  We're going to have to "rough" it.
Kelly: Yeah, lake side.
Me: Oh wait! We can use the old tube! That'll do.

Then a bunch of baby ducks came to hang out with us.  Here is some of the commentary around trying to feed the baby ducks.
Kelly: I wonder if they like Salt and Vinegar chips.
Me: Or maybe they like Sour Cream and Onion, let's test it.

The Kelly got one to eat out of her hand. 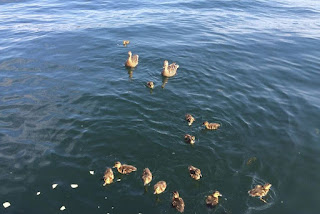 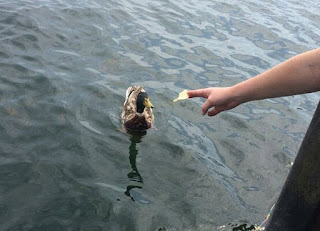 Me: No! I want the baby ducks to eat.
As they were leaving us...
Me: I hope you guys live forever!

Discussing the life span of dogs.
Kelly: I think Piper is a liver.

Percy was a non-stop barker.  He barked at the ducks, and the neighbors, and the big aussie on one side of us, and even a big lab that walked right up to him.  Impossible little boy.

Kelly: Do you think he'll get used to it down here?
Me: Do you think if he barks for 5 hours he'll get tired?
Kelly:  I can't wait to see your kids
Me: Yeah I'll probably let them bark too.
Kelly: I'll just put a bark collar on mine
Me: I'd throw him In the lake but I'm afraid he'll die.
Kelly: There ya go, he's in the Captain's Chair now.  Finally quiet. 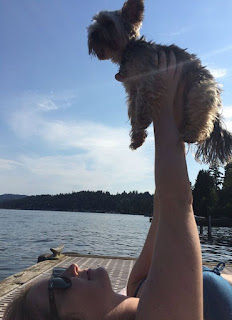 Kelly: Yes! He tired himself out!
Me: He just ran down the pier.
Kelly: Percy you tricked Me! Why don't we struggle with something that weighs 3 pounds?
Me: He weighs 5 If that makes you feel better.

Then the baby ducks came back again.
Me: Oh yeah I forgot to ask them if they like Doritos... Taco time!
Kelly: How do they tell each other a part? I bet you it's by voice.

Over all, I think they preferred the Salt and Vinegar chips - though I'm still not entirely sure they were good for them.

On Sunday we went to the park with Kelly's parents followed by what I like to call breakfast, lunch and dinner.

Little boy looking at my dog: I could lift that dog with one hand!
You and everybody else kid.

Kelly told them about my cousin asking me to take a Kayak from Florida to Cuba.
Kelly's Dad: If I had a say, I'd really like you not to kayak to Cuba.

Kelly's dad told us that one of his boss's used to say that he should carry a bomb on the plane with him when he was flying because, "what are the chances of having two bombs on a plane!"

Me: We have Friday off!
Kelly: Short week!
Kelly's Dad: Throw Back Tuesday!
Me: When you say it like that, all I can think of is throwing back beers.
Kelly's Dad: Exactly! 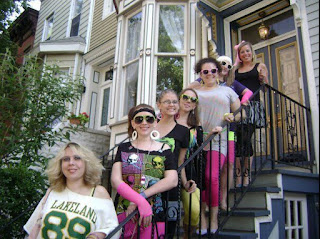 I hope you're enjoying life!

Posted by skcorynaffit at 10:12 PM