That Ain't No Honey Bun 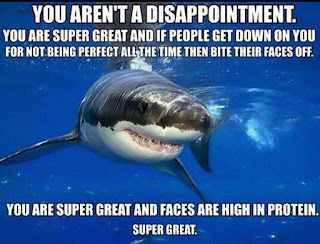 Dawne & Lucas picked me up from work to go to my inspection.  I happen to work in the same town that my new place is in, which is why I thought it was funny when Lucas said, "Hey! Tiffany! This is your new hood!"  We met Jason and the inspector, and I got to spend more than 15 min in the space.  That's when I got REALLY excited.  We measured everything and later Dawne would make me these really cool floor plans so I could place house! 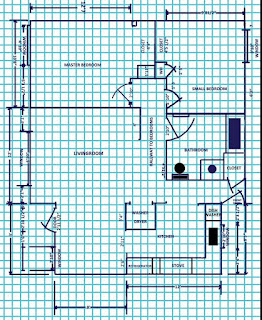 We have been trying to meet up weekly to play games at Zach's only, it's been so nice out that it's difficult to stay inside.  Instead, we met at a park in my new hood, and Kelly and Zach's current hood.   I think maybe I said I would bring catch phrase to the park, but I also got confused and ended up forgetting that I said anything about Catch Phrase and we ended up having to enjoy each other's company.  All Cassidy wanted to do was get Gelato, and I thought that was an amazing dinner idea so we left the park after 20 min.  Unclear why it took my so long to park, but when I was driving around, I saw an old co-worker.

Me: I saw John just now.
Tristin: You saw your mom?

And then an hour later when Tristin was trying to convince us we needed a real dinner.
Tristin: You know what Grandma always says?
Me: What?
Tristin: Dessert first.
Kelly: Actually, that was her mom and she just ran into him.

Kelly had walked away to FaceTime a friend.  We were pretty occupied and didn't notice she was gone, until I did notice, and then I walked over to her.  Zach followed me, sitting down saying, "So... who are you sexting!?"

Then we saw a Frisbee in the water.  Now this is a man who likes free things: 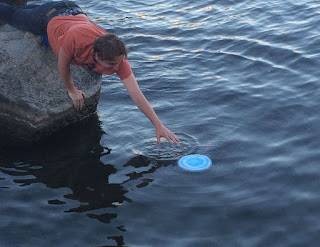 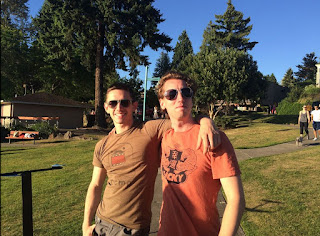 In other news, I watched Legally Blonde and Legally Blonde, Red, White and Blonde and then proceeded to try to debate the movies with my entirely male co-workers.  Bridging the gender gap: Am I doing it right?

I received a phone call from my nephew on Wednesday.
Kevin: Guess what!? I have the same skin is you!
Me: What?
Kevin: I don't have my Mom's skin, I have your skin!
Me: What do you mean?
Kevin: I got poison ivy all over my face! Isn't that great!

I grabbed brunch with Becky, which frankly I don't do often enough.  Then I worked a bunch which is boring.  I also dragged Dawne to Home Depot where I looked at every possible choice of flooring.  As Kelly says, "It's beginning."  I found some really cool tile / stone flooring that I'm in love with and Dawne learned I like the color of sage green.  I pointed out that Stella is totally sage green, though none of the paint colors quite matched Stella.  Several days later, Valerie came over to visit (shortly after climbing Rainier - a feat I really have no desire to ever do.)  I had to take a picture of her dress because it had the three colors I had envisioned in my living room - proving that they work quite nicely together. 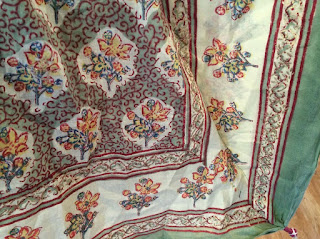 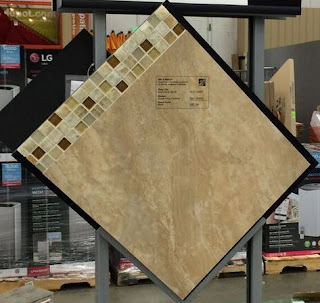 On Wednesday, Paisley and Jeff came over, and Paisley made us a glorious dinner that we ate outside on the deck.  There were many laughs, which I will attempt to summarize and share with you now. 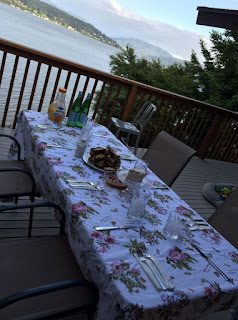 Paisley's niece married a man she never kissed.  Apparently, this guy came out to Idaho for a concert with a group of friends, which is where the niece met him.  Then, they chatting and facetimed for a 6 months, got engaged, and then she flew to Seattle, and got married without ever kissing.  Apparently her niece is very into eating organically, and after marrying and moving in with her husband, she called Paisley and said, "He told me he liked Honey Buns, but he REALLY loves Honey Buns.  He buys them in bulk, and that's the only thing he has in his pantry."

Jeff: When my brother graduated from college my dad didn't have a lot of money, but he found a way to save and buy my brother a car.  My brother, religious man that he is, turned around and donated it to the church.  My dad was outraged.  I bring it up all the time.  I make fun of my dad because he hates it.

Paisley: We went to see the Kurt Cobain documentary and it as really amazing.
Dawne: I would have liked that.
Lucas: It's probably got a sad ending.

Jeff: Thanks for getting the cake!
Jordan: It was the least we could do and we calculated!
Jeff: Whatdayagot there?
Jordan: Toaster Pastry.
Jeff: That ain't no Honey Bun.

Jeff, on getting their house ready for the market: All that house needs is a good sellin'

Dawne: What happened?
Uncle Ray: Some moron dropped the pump on my foot.
Jordan: First thing you do is fire that guy.

Did I mention that Uncle Ray dropped the pump?

We were talking about VR company and how in order to really make a really amazing experience the product would come equipped with a beer tube and catheter.  To which Jordan said, "They haven't figured out the ins and outs of the thing, yet."

Paisley collects bath soaps from all over and she keeps them in a big jar.  One of her friends brought her back a soap from Tahiti that smelled so good that she hid it way on the bottom of the jar for later.  A couple of weeks later, she found her soap in her son's bathroom.   Despite always inviting her family to take what they wanted to use (she has all boys, and she insists that "They like flowery soap.  I didn't force them to use it.) She had to tell her son that she wanted her soap back.

Son: I took a long time to pick that one out!
Paisley: I know! I was my soap.
Son: I wanna smell like Tahiti!

Paisley was telling us a story about finding a ridiculous video on facebook that she then sent to her most staunch and staid friend.
Jeff: Tell them how you found it.
Paisley: I was searching, "Pink Fluffy Unicorns."  I sent it to Bob and liven up his day.
Jeff: We tease him b/c it hurts.

Then we were talking about burying St. Joseph in order to sell your house, and Uncle Ray made fun of it. Paisley responded, "It's not a superstition and I'd appreciate if you would say that in my presence."

Paisley, about Nala: Do you put sun in in her hair?
Me: Haha
Paisley: Seriously, do you?

On Friday, I got a surprise visit by my brother-in-law's brother, James.  We met up in downtown Bellevue, and had some dinner and drinks.  Then I took him for a quick spin around Seattle.  I'm pretty sure I haven't seen him since our Godson was baptized, so it was super awesome to see him! 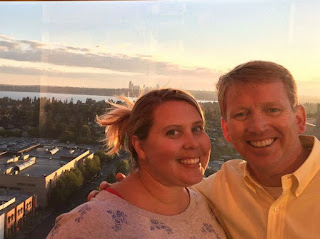 The next morning at breakfast

Dawne: I don't remember buying those pants for you.
Lucas: That's b/c they are Eliza's.
Jordan: Are you saying you're trying to get into your girlfriends pants?
Dawne: No, he's already in them.

I'm pretty sure this is a random quote from Erin: My worst nightmare isn't being at school, it's no having shoes on the train.

On Saturday afternoon we went to Katsu Burger.  It was like having a try new things club without the TNTC dictator - and I missed Kelly.  But also, it was really yummy, even if it was twice the size of a normal type burger. 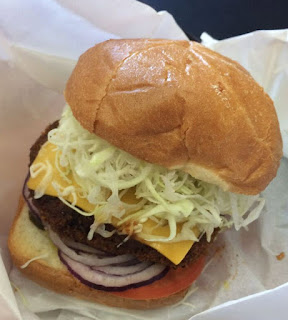 We finished up the week with a lot of pool and boat time which suits me just fine.

Posted by skcorynaffit at 8:33 PM