Dawne on the new neighbor: So far she's done everything I would have done which means she's a good mom. 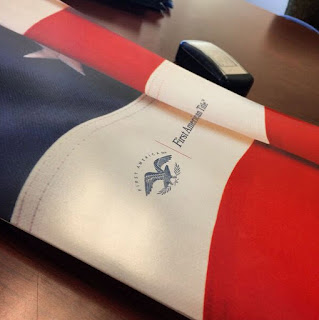 On Wednesday, I very patriotically signed countless pieces of paper to become a home owner.  When I got home we went down for a boat ride.  First, Dawne & Aunt Pat tried to salvage this pretty flower. 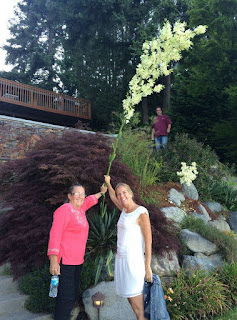 Following that, Percy the Powerful performed once of his favorite jobs, telling everyone to "GET OFF MY LAKE!" 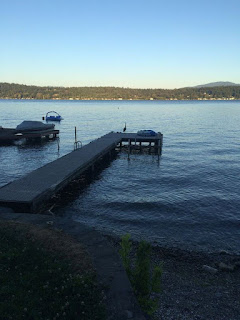 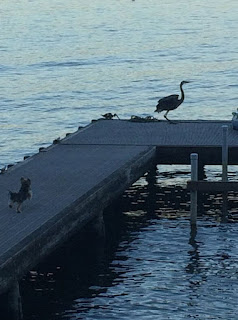 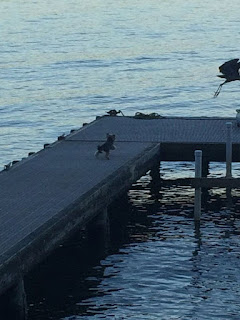 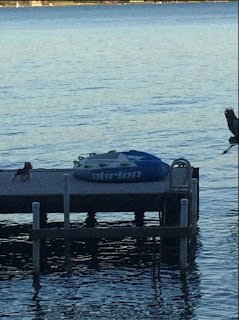 Eventually we did get to go on the boat though, and it was lovely. 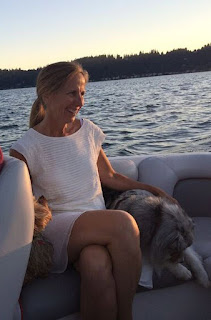 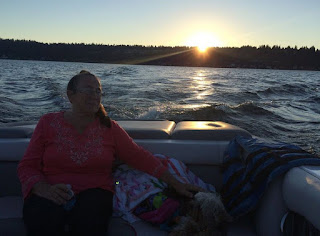 And on Thursday, Jason and Diana brought over my KEYS! Yeah that's right.  I became a home owner and a land lord all on the same day! (I have to wait until the 9th to take possession.)  As if the day couldn't get any better, I got to hang out with the NY Wood Street crew! I had them meet me at Norm's because apparently that is where I take everyone.  Also, it was trivia night. 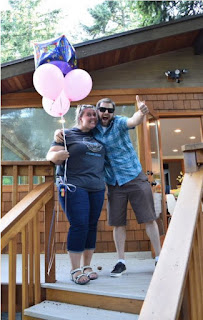 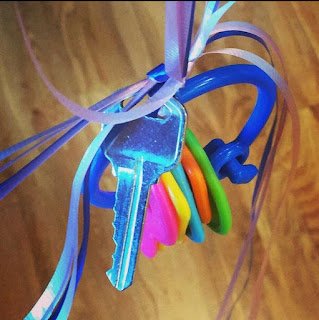 Liz:  Tell me honestly, did Maureen call you ahead of time?
Me: What do you mean?
Liz: Did she tell you we had to go to a trivia place?
Me: No! This is what I like to do on Thursday nights - we're just that in sync!

Trivia: What does SCUBA stand for?
Jenine: Julie! It's your favorite question to ask at parties!

Jenine: The bathroom is the coolest spot in here.  I could have hung out on that toilet seat all day. There was even an outlet!

During one of the scoring parts of Trivia
Liz: Oh sh*t! We were close!
Me: Were we?
Liz: No.

Trivia Question: What does FUBAR stand for?
Mo: F*cked Up Beyond All Recognition AKA Mo's 20's.

Before the night ended, I brought the ladies over to the Fremont Troll for an obligatory picture that I should have used flash for. 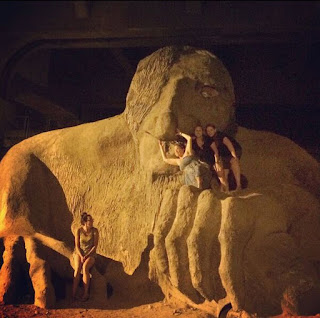 On Friday, we got up and had some coffee before getting ready for the party.  In fact I made 14 batches of brookies and 15 pounds of Mac & Cheese and Ziti.

Uncle Ray: I once tried to fix a Carburetor.  We tried everything.  Finally, we looked at the booklet it came with and on the front it said, “When all else fails read these instructions."
Dawne: I guess they know their audience.

We did eventually get to a good place in the party readiness so we jumped on the boat Casper and Percy got to go tubing. 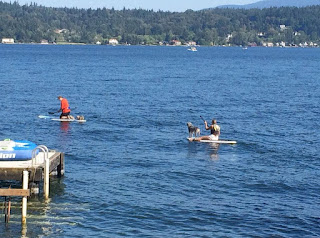 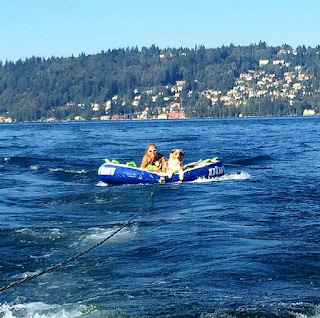 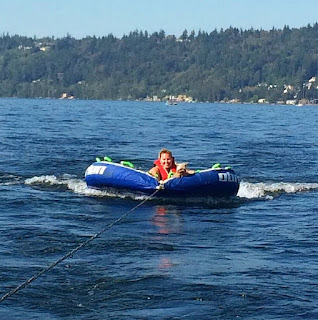 When Jordan lost his hat: I have two other art directors, Tristin - I only have one hat!

Nala chose not to go with us, but I suspect she regretted her decision because she got "lost" or more likely, hid from us for 3 hours. Fun!  The following morning, Dawne & Jordan took their new paddle boards out so I took that opportunity to meet up with the NY ladies for breakfast.  Only, I totally forgot it was a holiday and everything was closed.  We ended up at Fado, and Irish bar that only had one couple in the whole place.  Naturally, we loaded into the booth right next to them.

Erin: Are people doing shots?
Liz: It is Americas birthday! 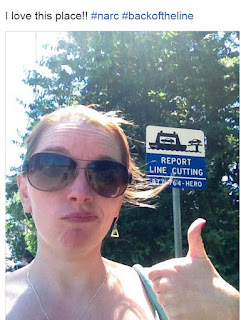 The NY ladies came on time which basically means two hours early - which was awesome because then I had more time with them.  I believe their exact words upon arrival were, "Are you freaking kidding me right now?!"  I guess that means that they were excited to be there.  Did I mention that I had invited them a couple of months earlier when I heard that they were in town.  About 3 weeks out, I checked in to see if they were still coming.  Apparently they had been bragging about going to a party on the lake to everyone, including our mutual friend Debina, but had failed to RSVP to me.  :)

Liz: We're such jerks.  First we take all the good seats by the pool and then we hog the relaxation station.
Me: You got here early and you traveled the farthest, I think you can be anywhere that you like.

They also brought tattoos, one of which I placed on my face.
Dawne: You have something on your face.
Me: It's called American pride.
Erin: Maybe if you had any you'd recognize it. 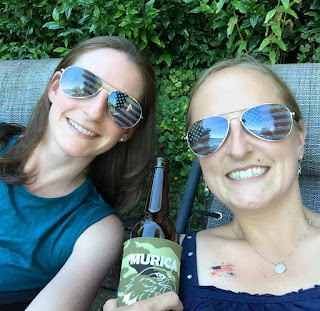 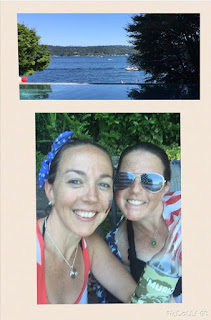 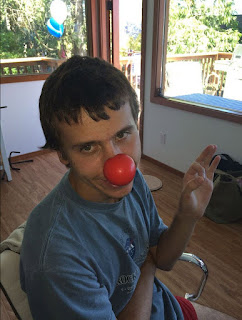 As the ladies were leaving to go to up to Vancouver for the World Cup.
Me: Are you sure you don't need anything, are you okay to drive?
Mo: It's like the summer of Lyme's disease.
Me: Excuse me?
Mo: I couldn't drink that summer so I was DD the whole time.  Thank God my dad gave me a curfew so I had an excuse to come home early.

Erin: I took everything that was nailed down, I hope that's okay.
Me (to Liz): Have a great wedding in case I never see you again!

Me: Can you do me a favor? I need you to help me take the dogs out.
Kelly: Sure, but my mom says I'm slurring my words, though.
Me: I'll give you a little one then.

Kelly: I made it!
Me: Yay! Wait, what?
Kelly: I was stranded at sea.
Me: Oh yeah, I saw the boat had problems.
Kelly: No, I don't think you understand.  I needed to pee before the boat stopped, and then we had to wait until someone helped us, and THEN it was the longest trip back ever.

It turns out that they just needed to press a button on the boat.  Dawne mentioned later that she too had been stranded (though not uncomfortably so like Kelly.) No one was around to help her at that point so she just fiddled with things until she pressed a mysterious button and all was well! 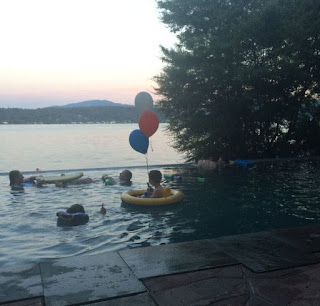 I got to hang out with Mike who seems to have a weird memory bank that forgets people as soon as they are removed from his life.  He told me to be grateful that he still remembers me, but he also never called me by name.  I also got to see his wife Sharon, who remains to be one of the most wonderful human beings around, and not just because she said she read my emails and that she never gets angry when I'm late, she's just happy when they do arrive.  I seriously need more Sharon in my life.  Talking to anyone for any length of time was very tricky, and I seem to have poured 10 beers and didn't finish one.  Oh man! I just remembered that I forgot to return the keg! Doh.

The fireworks that Jordan set off we're spectacular - I watched from the deck this year instead of the fire pit.  It had less s'mores, but the view was top notch.  The next morning we woke up early and cleaned up.  At 9, Dawne said, "okay, let's carry up the tables and chairs."  I said, "Nope! At least 8 people offered to help us clean today.  Let's wait until they show up and do it together."  See - I have my brilliant moments.

And not so brilliant moments.  Apparently, Dawne and Jordan carried two coolers of beer and capri sun's down to the lake front.  I had no idea, so I made countless trips up and down the stairs getting people beverages.  Sigh.  The good news is, those same beverages were used on Sunday in the relaxation station.  Glorious.  Because I got a super cheap float, we have to fill it every time you try to use it.  It's still wonderfully divine.  Hannah, Kelly, Zach and I spent all afternoon in this thing.  That's my kind of perfect day.

Zach: I wish my day wasn't so stressful
Kelly: Your shirt is inside out and backwards.
Zach: I just told you I don't need any more stress in my life!

Kelly: Look at all these Capri Sun's.  Somebody is drunk.
Here is a pic of the aftermath: 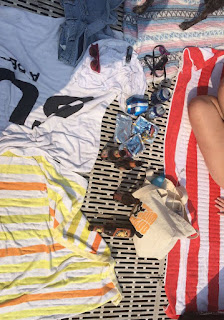 And then I showered and went to be early - what a fabulous weekend.  I'm sure I'm missing some of the finer parts, but in an effort to be caught up before I leave town this weekend, I'm putting a lid on. 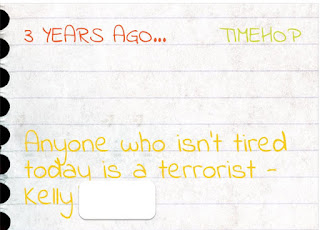 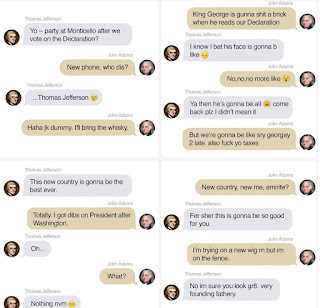 Posted by skcorynaffit at 9:53 PM