Sorry, I’m a lil late but I got distracted yesterday!

I'm not going to lie - the most exciting thing that happened to me all week was tiktok teaching me how to make a quesadilla in the toaster.  I can't wait to eat these for every meal until I never want to have a quesadilla ever again!

Monday, a dude came out and was here until 10PM putting in a new water heater.

Me: (trying to be a pollyanna about the whole thing)…. There was only like 2 or 3 towels of water…
Becky: I like your new measurement of liquid: Towels of water.  Jared wants to know if that’s a metric towel or an imperial towel.

Tuesday, I dove deeeep into educating myself on white supremacy and then you know, felt awful and cried.  I’d be lying if I said this only lasted one day.   Mission accomplished?

Wednesday, Jen made a surprise visit and we walked around my little parking lot for like 30 minutes.  So lovely!  The sun was out and we were able to make an exchange with Claire (6 dozen Brookies for some magical brown butter salted chocolate chip cookies.)  It was such a nice day out that my left shoulder got a bit of color.  That’s right, just the one.

Also… Sean & Stacey’s 25th anniversary was actually on Wednesday, and my mom continued her tradition of bringing ice cream over to celebrate.  (Sounded like that was a good thing because Stacey was a bit disappointed over the weekend when only balloons were delivered after the parade and they didn’t come with ice cream.  Expectations have been set and they must be met!)

I decided to do a HP trivia, so I asked my two HP buddies, Dr. Rach and Bails.  And then I got this: 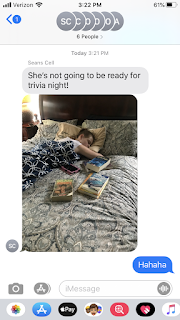 Thursday, it turned out to be gorgeous, so at around 4:45, both Percy and I had HAD IT with being inside and we called Lucas and Dawne to meet us at the park.  A much much needed walk.

We had kind of a rainy weekend, so there were a lot of hugs for Percy.  We found a break of sunshine on Saturday so I dragged Fran and Zach out to the dog park, and then shared a ding dong with Lucas over an intense discussion of the times.  And then Sunday was declared “Jordan’s day!” AKA early Father’s day so there was swimming, games, steak and Artemis Fowl. 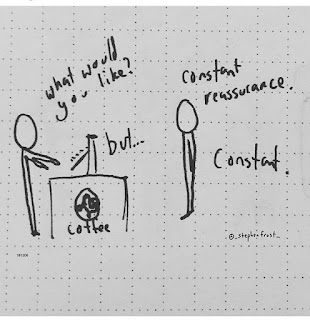 In 2019
Apparently, super boring and I spend most of this week at E3.

In 2018
I’m including pictures one of the greatest car decoration I have ever seen and the two buddies, Casper and Percy.  (I also went to E3 and stayed at a wild and weird hotel and got to have breakfast with the Smalls.)

Raptorific:
If I were Harry Potter I would have addressed Voldemort as “Tim Riddle.”  He’d be like “IT’S TOM RIDDLE. ALSO, IT’S NOT TOM RIDDLE,  IT’S VOLDEMORT.” Ahahahaha classic Tim.

Slaphat:
The epilogue for the last harry potter book should have just been thirty-year old harry forwarding dozens of cat videos a day to mcgonagall with the caption “if this u” on all of them.

In 2017, I decided to put together an extra special baby shower present together for my godson-to-be.  The most significant part about this present is that while trying to seal the envelope with fancy wax I managed to light the wax, card and myself on fire.  This magic stuff can be dangerous without proper training!