I’d say the main takeaway from this week was that I started a “diet”, tried to eat healthy, limit alcohol, work out, and go to the dog park every day, and after 6 days of this I had gained ten pounds – so that’s depressing.  But the good news is I actually lost weight in the beginning of the pandemic when I was depressed, anxious and drinking every night so I guess I have a choice right now… and the health of my liver is in the balance.   The meeting at the park every day again has been really nice though.  Percy and I are big fans.

My nephew, Patrick is on the left in this amazing recreation photo: 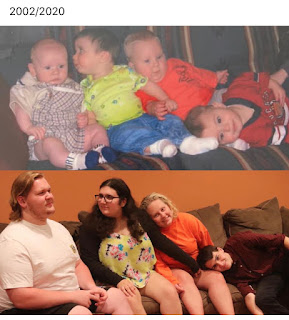 I decided it was time to meet for some social distanced sipping and sitting because I had not seen Dr. Rach since February.  This is a peek into the planning of said event: 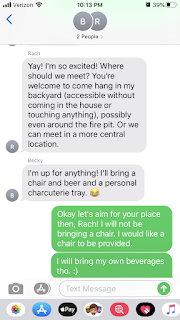 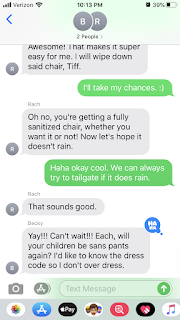 (Each = Rach)
And now we see why Becky needed to bring her own chair...

Our third and final round of Harry Potter trivia happened on Wednesday.  Now the first round we had placed 12th and then on the second round we placed sixth, I think, and on the last round we placed third!! I think it’s fair to say that I had some time to study and got real lucky on the questions.  Here are a couple of them that we did get

What is the name of the band that plays at the Yule ball?
What does the US president call the Ministry of Magic in his head?
Why was Harry Potter going to the teacher’s lounge when he saw Quirrell tending to Snape’s leg in the first book?

I’m not gonna lie, on Saturday I slept until noon, and it was glorious and then I was doing some chores around the house in a very short dress that I had slept in without any underwear underneath (yes I’m setting the scene) when Percy starts barking and I kind of went to look to see if someone is at the front door but I didn’t see who it was I thought maybe someone is dropping off a package and then suddenly Zach and Fran walk in. Now, I love having visitors but I usually like having visitors when, you know, I’m wearing underwear and also when I don’t have stuff all around at my house getting ready for a trip. So we’re talking and chatting and then Fran basically asks “why are we here?” I offer to maybe play a game (Zach was totally up for that of course) then I said, “Great! Why don’t you grab a game while I go put some pants on!”

Saturday night Becky and I went to Rachel’s for some social distancing fun (and I’m not even going to tell you who was wearing pants). I laughed hard and number of times during this evening as you can imagine but I think I left the most when Rachel was telling us about helping someone with their phone and having to teach them how to delete open pages of Safari and how many pages were open and I was able to open my phone and show her that I had copious amounts to scroll through that were all open - and I know how to close a tab!

Sunday, I felt very accomplished because I managed to replace the broken toilet seat that my cleaning person had broken earlier in the week and then I went to get my oil changed and found out that sometimes when you go early they just top off your oil which is pretty rad (free charge - thanks Jiffy Lube!) and then I vacuumed my car and got it all clean so that I could sleep in it this week. Then I went to pull out all the supplies I would need including my Pee pockets (which past me had folded little pieces of toilet paper and a wet one into each pocket!!)

After five years of living in my home without incident I had an incident. I had some groceries delivered on Sunday night and as I was showing my ID my next-door neighbors boyfriend passed by. We said hello and then both the neighbors boyfriend and the Amazon delivery person left.  This all happened with my door open as I always do, and I went to grab my groceries and suddenly my dog goes running out and immediately beelines to sneak underneath the neighbors fence and then apparently he got through the barrier that was put up for their dog not to get into their front yard. Percy gets into the backyard and is surprised by 100 pound dog barking at him so he made a quick U-turn and ran back through the fence and then the other fence and back into my house...All before my neighbor could come outside and say “What the hell just happened?” I apologized profusely, and she just said “Well, I guess the dogs have met!” And we laughed (me very nervously) and then went inside to have a serious chat with Percy.

And then just as both of us were calming down, Janette called to finish up the weekend perfectly! (Did I find out that one of the things she checked off her to do list was calling me? Yes. Was I incredibly proud and happy to help check something off her to do list? Also YES) 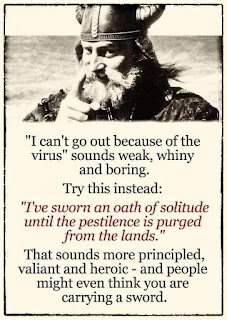 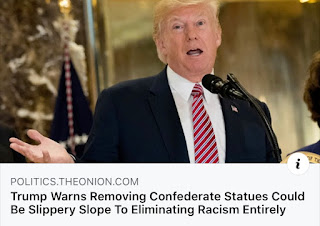 2019
It was again Emmett and Anderson’s birthday party – and I remember Emmett taking each adult he could get a finger hold on inside the house, showing them his cake and asking them to get him a piece.  Amazing work here, Emmett.  You made the adult feel special, and you were so cute, I’m surprised anyone was able to say no to you.

In 2018, I went to a commercial shoot for Halo: Fireteam Raven (the arcade game I worked on).  I met the voice of “KILLTACULAR!!” and learned what “Lady Drinks” are.  And also went to Emmett and Anderson birthday.

2017
“Ugh, Mom!  Why did you give me these genes! You know I like khaki’s!” Sounds like something Lucas would say.

Posted by skcorynaffit at 11:30 AM