Sunrise is Very Off Brand for Me.

Boy do I drag my feet writing you when I have really dull weeks.  After almost 6 months, Percy and I are finally getting into a groove working from home.  I have abandoned my “desk” set up.  It was going alright when it was just a folding table and chair, but then I brought my gaming chair from work, raised the height of the folding table and now, I feel like a lil kid whose feet don’t touch the ground and I’m reaching up high to try to type.  Ultimately, that room “AKA: Zach’s room AKA: the room Zach moved his stuff into, slept for two nights and has never returned to” gets a lot of sun, so if I close the door on hot days, I can maintain a reasonable temp in the house.  So, now, I have picked a spot on the couch that works perfectly. It’s close to a side table, has good lighting, and the wall behind me is neutral but fun. (I have a ginormous mirror I stole from Dawne, so it’s a bit of an Alice through the looking glass situation but without the jabberwockys.  This means that in certain spots, you have a full view of all of my books and games, which would be fine if they were more organized… but I have stared and thought about reorganizing for so long now, that I know it will never happen.)  I work from my kitchen table when I need to be professional, and I stand up at a bookshelf when sitting is unbearable.  Percy moves around a bit, but mostly snores softly on his Mister Chief pillow, and I take daily pictures of how adorable he is, and then abandon the pictures because my phone cannot capture the full power of cuteness.  And we make sure we get a couple good walks in to stay healthy.

My work week was crazy-town.  Though, it did prove once again that when everyone is freaking out, I get super calm.  (Conversely, if no one is freaking out, I do, because someone HAS to.) Maybe I should have been a 911 dispatcher?  Or maybe that would be awful for the calm callers…  Either way, I had a lot of work calls to make, and on the top of my notes page, I wrote “NO ONE IS READY FOR JOKES, TIFFANY.”  I thought this note worked, until my co-worker thanked me for cracking jokes in all the calls.  Just imagine if I wasn’t trying to be serious!

I learned on Friday that the “gaiter” masks I was wearing while walking outside are worse than not wearing a mask.  Well isn’t that just kick-ya-in-the-head-spit-on-your-neck Fantastic! Not a real big deal, but as Maureen pointed out, the idea that someone might wear a mask into a store and be told it’s not good enough is definitely going to cause more tension.  In happier news, Ryan made the trek over towards me on Friday, and we got a good long walk around the park and tuckered out the pups, and then I headed over to Rach & Anders’ place for socially distanced catch up.   Saturday & Sunday I spent at Dawne’s.  It was wicked hot, which is probably why I woke up with a migraine, but after two cups of soup and a Gatorade, I was able to leave the house.  We lounged in the lake, then Nater and Lindsay came over, and we had a lil picnic on the boat, followed by a lovely evening of chilling on the deck before watching French Kiss in the pool.  Sunday was much of the same sans headache.

Lucas is settling in well in his new pad.  As I mentioned before, all 6 of them are musicians so it’s the perfect scenario for him.  They have basically been having dance parties every night, and because Lucas is the only one with a 9-5 job, he’s justifiably exhausted.  It reminds me of that summer that there were a bunch of college kids at the compound, and Matty and I tried to stay up every night drinking with them.  It was a super good time, but I remember the weekend they all left to go back to college I had the best sleep ever, and my liver sighed with relief.  I’ve never felt so old, and that was a good ten years ago.  We asked Lucas what he’s been eating and how they are handling food in a house with that many people.  He said they just eat whatever is in the house and then venmo the owner for what they ate.  Such a simple and elegant solution, and one that I totally didn’t have access to back in my day.  But then, I had a roommate who’s mother sent her back to school at least once a month with a freezer worth of meat, and all I had to do was pick up the smiley fries / sides.  Lucas also explained that a couple of the roommates work at Pagliacci so they get lots of free pizza – which I think might be almost as good as the freezer of meat.

I chatted with Mo on Sunday because they were in Ocean City, MD and it was raining on Sunday which meant that they were doing a puzzle in the hotel room.  Apparently the rest of the trip was amazing, though.

Pat: I think this is the best trip I’ve ever had down to Ocean City.

Mo: Really? Even better than the time you proposed to me?

Pat: Oh yeah that was a pretty good time.

Me: Patrick is with you?

Mo: You’re just like Kevin. As if we would ever drop off Patrick at school and then have a family vacation.

Me: I don’t know. You all dropped me off at college and then went on a cruise to Alaska.

I got a text from Erin saying she found a picture of us together in Verona in ’99, (and Tuscany and Venice and probably Rome).  My brain hurt a little trying to remember everyone in the photo.

Erin: I am literally wearing a different sweatshirt or coat in every photo.  I can’t imagine how heavy my suitcase was.

Me: I am fairly certain that I wore that same Ireland jacket and that exact pair of jeans on every vacation I went on for 3 years.

Me: Do you remember when [our Jewish friend] Lee yelled, “JESUS IS COMING!” during the parade in Florence?

Me: and how I threw a fit about not going to church on Palm Sunday until finally I was allowed to take a cab with Janette to a Church at like 5 am.  I told the cab to come back in an hour and half b/c Palm Sunday is the long one, only in Italy it lasted 30 min and we got to walk around the city at dawn.  #suchateenager #myrebellionincludeddemandingigotochurch

Erin: That’s sweet. I obvi didn’t care.  I do have a pic of us in the dark on the roof of our hotel waiting for the sunrise.  So you were a real early riser that trip.  I look hella pissed about it.

Me: Who organized this?  It’s like we decided maybe we could achieve a robbery if Heather Ann hadn’t decided to wear WHITE.

Erin: Victor told us the sunrise was amazing and a small group of us got up early and went. Sunrise is very off brand for me. 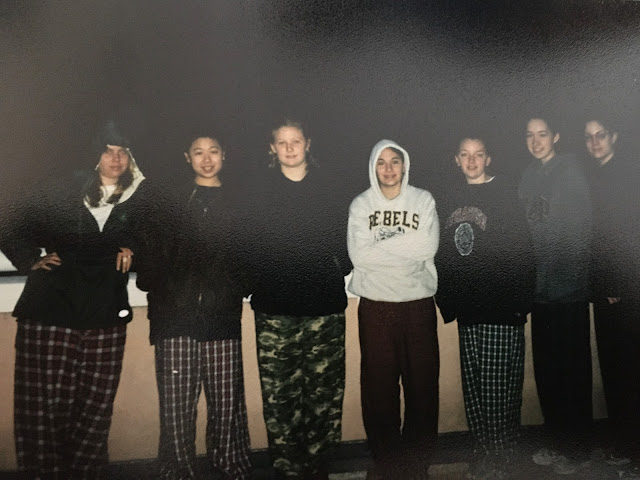 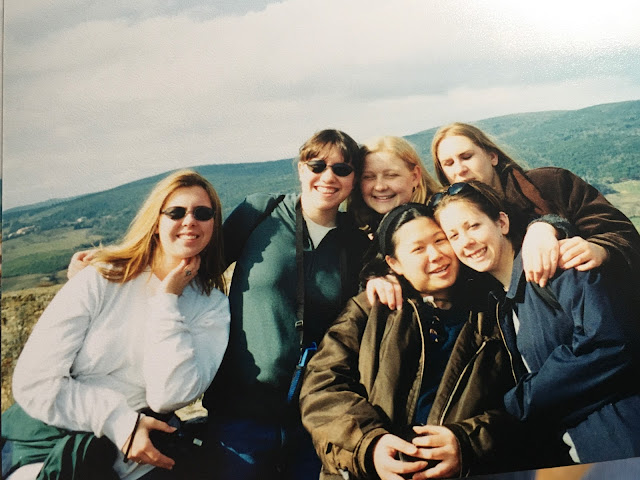 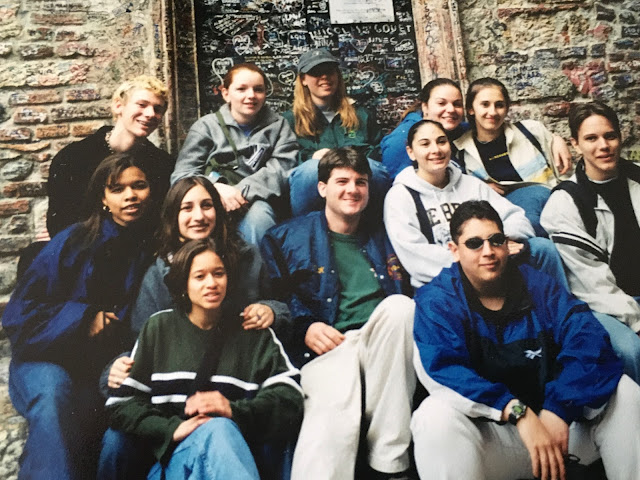 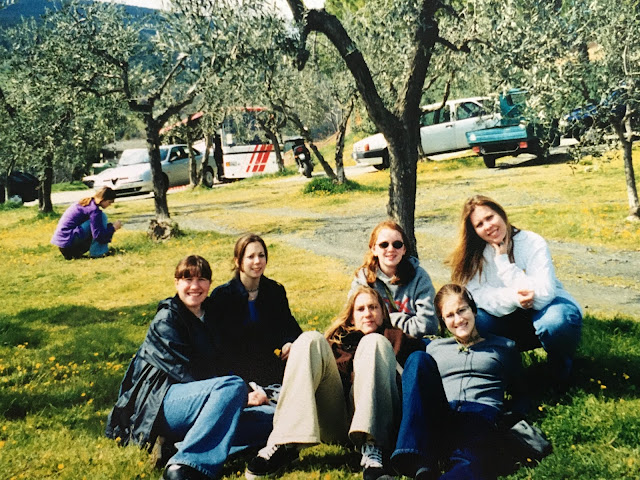 Erin: I had almost booked a flight to VA beach….and like that day they asked that people save the lines for people that needed to make Covid arrangements.  I had to call because I was using miles.

Me: I like that you had to explain why you were calling to make sure I didn’t think you were a weirdo.

Erin: Totally.  I was like Tiff will think I’m lying about an alleged trip. 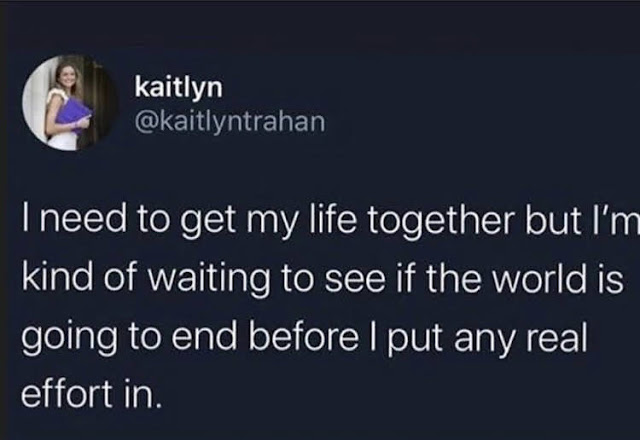 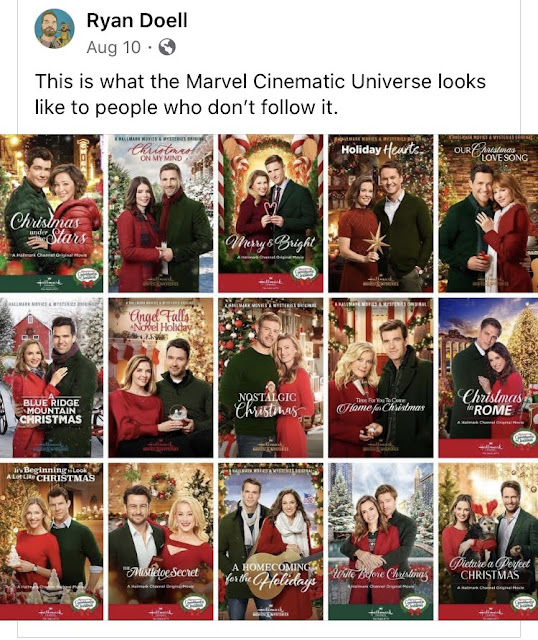 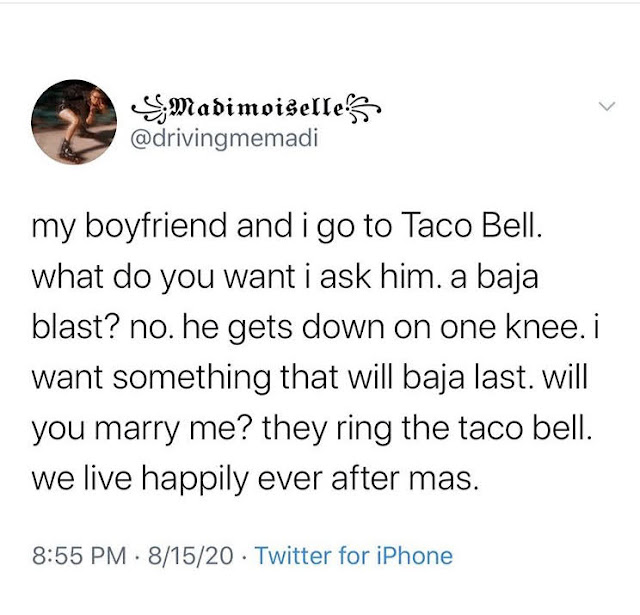 Okay I think that’s about it for this week! Love you! Mean it!