There is a furry friend that lives next door.  He pops his head up in this spot, which is inches from the window in my place, and it puts Percy into a tailspin (pun totally intended).  He doesn’t particularly love it when he sees him on our way into the house either.  No matter Percy’s reaction, this friendly fellow just looks on curiously. 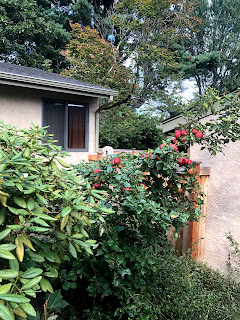 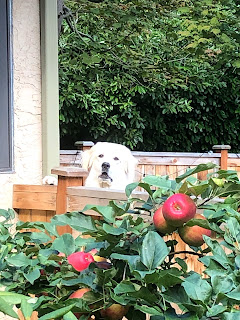 To follow up on the saga of the robbery / Percy bag: My co-workers, T-Pat and Ryan offered to run over to pick up the bag while I was in a meeting.  (I had asked T-Pat to go with me and just have 911 on speed dial but they had time when I was in a meeting and they are super awesome people.)  I had Ryan share his location so I could watch them progress towards the target while on a conference call.  When they arrived to the house was when I was at peak terror, and then I got a text saying that it was lovely elderly couple and they had the bag.  They had also picked up some of the items that had been emptied out including some paperwork, THE KEY TO THE HOUSE, many Percy bow ties, and his favorite toy.  I guess my method of taping a key to a piece of paper in hiding it in with other papers worked! The moral of the story is that there are many many awesome people in the world! 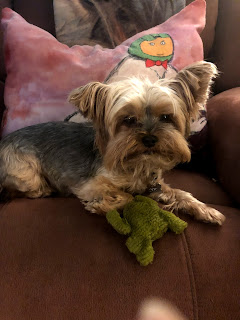 My parents have one less resident in their home, so I suppose this means they are ready for me to visit for a couple of months (right Momela?!) I made some changes at my house too.  When I say *I*, I obviously mean that I paid 4 people to work 9 hours to “trim” this English Laurel that is supposed to be the size of a bush but actually turned into a massive tree in my back yard.  The results are miraculous.  I cannot believe I had been living so long without the glorious rays of sunshine brightening up my home.  Even as I type, I have yet to have to put the lights on – and usually I have to put them all on first thing!  Very very exciting.  Now, I just have to wait until the rainy season arrives and I’ll get my grass seed down. 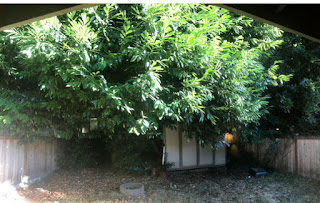 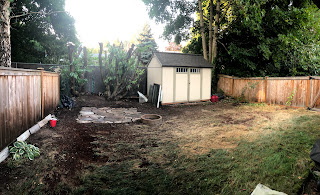 I got to see a lot of my cousins this week.  Thursday, I went over to Ray and Michele’s for a socially distanced dinner.  I haven’t seen them since February, so it was great getting some 1 on 4 time. 😊  And then on Saturday, they packed up and moved into the lil blue house at Dawne’s.  We established the social distance rules right away (basically keep a mask on, stay outside as much as possible, and stay 6 ft a part while eating.)  And, it worked out really well!  Saturday was a lil over cast and cooler, and the pool heater broke.  So, when I agreed to go in with Ashley, it was an act of pure love.  We also got to see D&J’s new office space, and generally had a chill time.  Saturday and Sunday, I decided not to go on the boat, but I had Dawne take Percy with him b/c he loves the boat.  What he loves more, though, is to stay by my side so he ran back up to hang.  Instead, on Sunday, we went in the pool again (once again, showing my love by getting into a chilly pool).  Buddy, Raymond and Michele’s dog, followed Percy where ever he went.  At one point, Percy runs down by the water, and Buddy runs over to me to tell on him.  I tried to apologize/explain that Percy gets to do whatever he wants, but Buddy still seemed to need an explanation for the pipsqueaks behavior.  I was very pleased that Buddy and Percy were getting along because this meant that Percy finally forgave Buddy for systematically destroying every squeaker in ever toy in the house the one time we left the pups together when we went for dinner.  (Percy was so appalled that day that he took me to each toy in the house and had to show me  the destruction.)  Luckily, Percy is over it, and also took Buddy down to the water with him.  The Buddy kept following him up and down the stairs until one point when Percy popped up and Buddy did not.  That’s when we found Buddy, soaking wet, on a pier two doors down.  Adventure time for everyone, I guess! 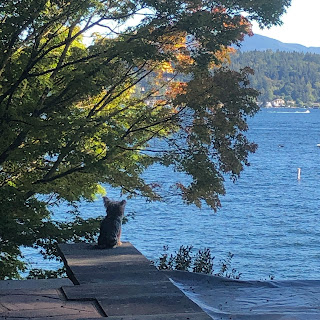 Sunday, I saw on Facebook that one of my cousins on the other side of the fam was wish us a Happy Cousin’s Day.  What an awesome coincidence, since I was with a bunch of cousin’s! Happy Cousin’s Day to all! That is until Raymond questions the validity of the date, and I actually looked it up, and it was a different date.  We decided that it was much more fun to celebrate right then and there, and started texting cousins!  Raymond tried to ruin the day by wishing Sean a non-cousin’s day – but I feel like by the end of the best cousin’s weekend ever, he was on our side about embracing the joy!

Let’s see what else?  At one point, Zach and I were unwittingly a part of a Trump parade as many boats passed by the house, and I got a bit of Journey stuck in my head while I made some friendship bracelets.  We also had a nice bon fire on Saturday night (before the crazy wind shift for the fires.)  We got down to the fire pit, arranged chairs so we could safely consume s’mores and then Dawne was like “We forgot the music?”  We asked if she wanted us to play something on our phones and she said, “No! Call Lucas and tell him to bring his guitar!” And he did.  He and his friend Izzy were our own personal juke box (even though he specifically told us, “I’m not a Karaoke machine!!”  He managed to learn each song we wanted within minutes of our requests (although, in that minute or two, as we started humming along he would promptly yell, “DON’T GET ATTACH TO THAT KEY!”)  It was pretty magical.  At one point Nikki and Ashley were looking around for something.

Dawne: Hmm that is weird.

N&A: Do you not get the moon over here?

Dawne: What if we can’t find it?  Who should we call? The Police?

Zach: Naw… definitely the fire department – they have the ladders!

Jordan: Oh no! The Jewish holiday’s are going to be really messed up if we don’t find the moon.

Lucas: How will we know it’s Cousin Day?  It’s clearly a lunar holiday! 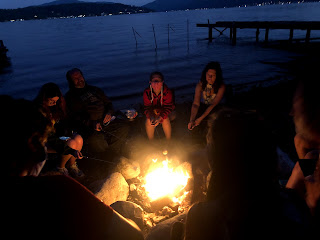 Monday was more gorgeous weather. Michelle and Ashley went on a bike ride, Nikki and Dawne (and Percy!) went on a paddle board ride. Lucas and I jumped in the lake before he left to hang with Arda, and I pulled out the big blue mat.  It seemed like the perfect day to try to play with all the toys, so next we had a lovely boat ride.  Percy was super happy! 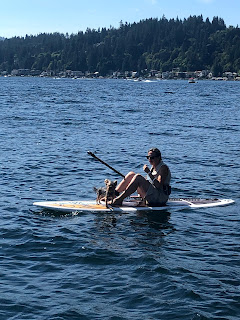 Last week a year ago two very exciting things happened – I became a Harlem Globetrotter (please see official jersey as proof.) And, I managed to take Ryan and Joe through California Adventures and Disneyland, including reservations at the fancy new Star Wars bar, all before 5PM.  Which also meant that I was showered and taking a nap by 5:30! I don’t know if I have ever felt such sheer joy in an accomplishment before.

In 2018, I went to see Zac Brown Band with Dr. Rach – another native from Georgia!

And in 2017, I went to a music festival with Nick and Shana and we got to see the Roots and Lorde.  Not. Too. Shabby. 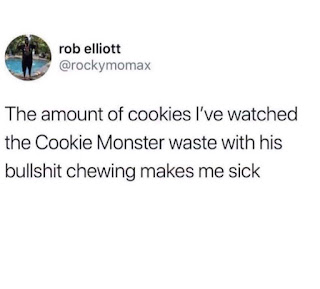 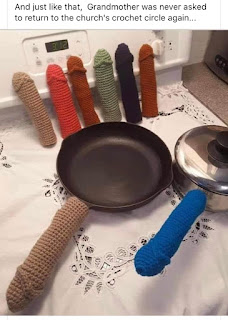 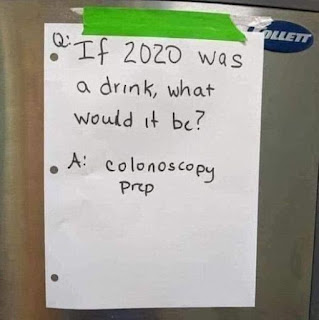 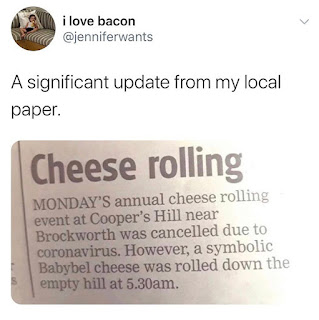 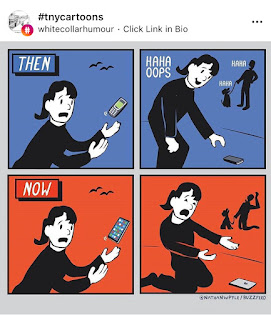 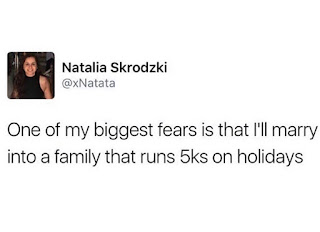 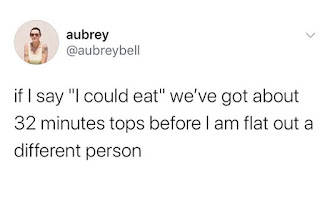 Alright – that’s about it! Hope you are all falling into Fall nicely!

Posted by skcorynaffit at 7:31 PM