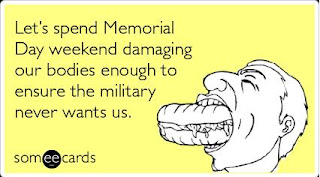 My last week at Pokemon was pretty mellow.  Becky was out of the office, I finally got the VP to clean out boxes that had been sitting next to my desk since he had moved from the NY offices two years ago (going through papers actually made him work up a sweat), and received 5 out of 6 friend requests from my favorite Barista’s. (I have almost caught ‘em all!)  Friday, I woke up at 5:30, put on the T-shirt I had been planning on wearing for weeks, made mac-n-cheese for the Judy’s 75th and then decided it wasn’t appropriate, and changed.  I did however, wrap one up and give it to the Brand Approvals Manager :) and… Becky wore it off site: 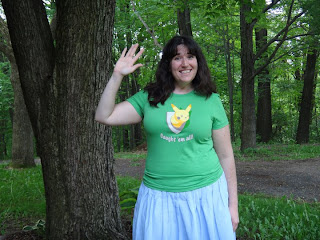 Due to the fact that Becky was out gallivanting, she left some care instructions for me to cube mates (you know when I need to be coffee’d and that sort of thing.)
Chris: you're like David Koresh.  He even kind of looks like you. 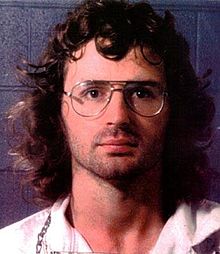 http://en.wikipedia.org/wiki/David_Koresh
Me: It’s over-rated to work where all of your friends are.
Chris: That’s why I work here.
Chris: Especially for someone with one foot in the grave.
Me: I don’t like where you are going with this conversation.
Chris: You are going to die.
Me: I understand where you’re going, I just don’t like it.
Me: Have you ever listened to the lyrics of Hallelujah? They don’t make any sense.
Chris: You don’t have a soul.
Me: I do too! They aren’t good.
Chris: This isn’t the first time I’ve thought about this.  You don’t have a soul.
Doug: That song brought me out of the depths of depression in a darkened room.
"Hallelujah"

I've heard there was a secret chord
That David played, and it pleased the Lord
But you don't really care for music, do you?
It goes like this
The fourth, the fifth
The minor fall, the major lift
The baffled king composing Hallelujah
My Response: Fine.  I was wrong. 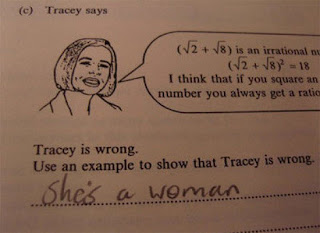 What Zach says instead of helping: You know you now you won't be able to use either of the TV’s.
Jordan: This is your fault. 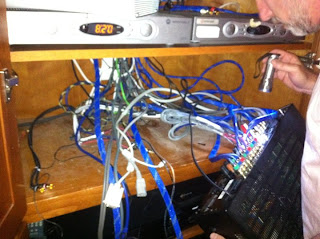 Jordan and Zach finally got both screens on either side of the fireplace to play the same thing.  Very exciting.  When I told Cathy what we did on Saturday however, I said, “Jordan got a new VHS player. Wait. Nope. It’s not 1987.  He got a super fancy machine that plays DVDs and Netflix and Pandora.  Slightly different than a VHS.” The first thing Lucas did after installation was to play rock band.  Only, now we got to hear it on BOTH sides.
Lucas: Hmm. That’s unfortunate for you.  I’m going back to the roots to remember the good times.  Call me a fundamentalist but rock band one is the best and everyone should know.
We had a Mad Men themed 40th Birthday Party on Saturday Night for Shane.  Super fun, Cathy gave an amazing power point presentation.  At one point there were slides that featured “Lesbian’s love Shane” and “Kid’s love Shane” signs with kids and lesbians surrounding Shane.  At this point, Lucas turned to Shane and said, “Why are you always holding the sign?” 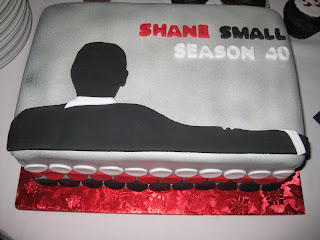 Before the party, I went to Common Folk, an extremely girlie Martha Stewart like store to get a card for Shane (b/c they have funny cards.) The ladies there asked me if I was looking for a present.  I told them that I was, but that it was for 40 year old man, so maybe this wasn’t the store for him.  I went to purchase my cards and the lady came out from the back holding an old machete and asked “Do you think he would want this?” and I replied, “Why yes. Yes, I think would.”    And then they proceeded to wrap it with cellophane and pretty ribbons.  I wanted to give it to Shane with a huge audience but I got distracted.  So at the end of the night I asked him to open it… and upon taking it out of its sheath, he raised it above his head and announced “The umbilical cord shall be cut with this!” Cathy said they should put it over their bed… and I replied “Bed!? This should go over the CRIB!”  He’s excited about getting a sword for his birthday, but I still think it’s a machete. 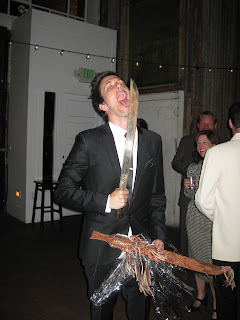 New couple (I do occasionally talk to people outside of the circle): Do you have the baby-sitters number?
Chick: Um… no.  But she knows that we’re bound to come back eventually, Right?
Same chick: How do you know Shane?
Me: Um, well Dawne and Jordan are my cousins.
Chick: OH! You’re Royalty! You must be stopped on the streets of Seattle all the time.
Me: Actually, It’s been years since someone has given me the respect I deserve.
Lucas came up to me during the party with a plate and a half peeled orange and said, “Worst idea EVER serving navel oranges! How am I supposed to eat this?
Me: Honey, those oranges are for the drinks. They aren’t serving them. 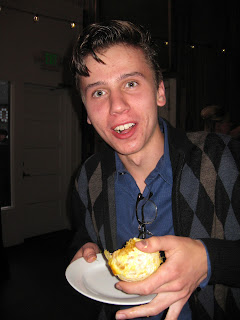 Brett (Shana’s new bo): I think we've met before
Nate: Don't worry about it.  Shana and I don't get along.
Brett: Really?
Dawne: You’re short.  Did you know how short you are?
Me: Yes.
Dawne: You were standing next to Shana, and seriously.  You’re little.
Personally, I think we all look short next to Shana. 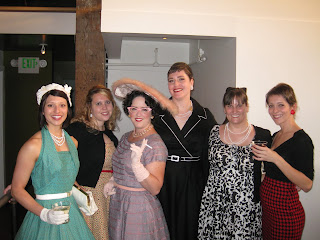 We went to the Tin Table after the party for some dinner.  Shana was telling us that she had gone out the night before and they were all sitting around comparing phones.  She was talking about how awesome her iPhone is and Tyler was pontificating on benefits of the HTC surround Windows phone when Brett pulled out his phone and said mine is just a normal ordinary phone… nothing special… and then dropped it into a glass of water.  To prove its water resistant abilities, Brett, dropped his phone again, into my water and then said, “Oh man.  The only thing she said she wanted was a glass of water and I just ruined it.”
Jen (Upon people telling her Hays’ glasses were just as good as her costume glasses with the outfit): Maybe if I was Ethan in 1993.
Me: Oh that’s going in the Monday Email.
Jen: You just can’t throw out an insult about someone who isn’t here anymore.  Be sure to insert the pic. 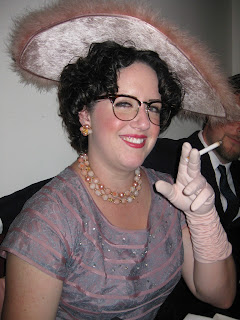 There was a lady at the party with a tattoo on her arm as well as a tattoo on her breast that was ½ covered with clothing.  Brett mentioned that he thought her tattoo was cool (meaning the one on her arm) and she made a comment like he was looking to see the rest of her tattoo.  Brett, retelling the story, said, “Did you see the woman I walked in with? Pulease.”
Jen: Not many people would understand that reference.
Me: What reference?
Jen: Benny Hill.
Me: Oh! The old guy.  And by old I mean dead.
Jen (as she spilled her drink): My Tom Collins!
Rach: It’s okay.  She’s just drunk.
Jen: Cheer’s to me! (and clinked her own water glass.)
Hays: You know we have booze in the basement.
Me: but then she wouldn’t be socially drinking with us.
Hays: If she's on facebook isn't that drinking with friends?
Jen (on waiter bringing us several bills at different intervals): I think he's trying to flim-flam us.
Hays pulled out his wallet to play for dinner and Rachel commented, “Is that a 12 year olds wallet?  It has Velcro? Do you put that in your fanny pack?”  and then proceeded to tell us a story about getting caught in the rain with Hulk Hogan’s family and he was wearing a blue camouflage head-kerchief and a big fanny pack.
Shana: So who's sitting on the child tonight?
Me: Imma get the Floozy Burger.
Jen to Shana: Are you a floozy…? I don't mean are you a floozy because you know…
Shana: Given!

Shana (About Jen’s fake cigarette): Careful. She'll literally blow smoke up your ass
As we were walking to our cars after the party/dinner there were a bunch of hoodlums standing outside on the street and one of them commented, “You look rather dapper this evening.”  After thanking the young gentleman, Shana said, “Dapper huh? That Gutter punk has quite the vocabulary.”  Jen, “Indeed.  Throwing in an SAT word.”  Hays, “I hope he didn’t just let his secret out to all of his friends.”
Watched some “Drunk Kitchen” episodes which I would like to share with all of you:
“Deluxe because we deserve it.”

If you want to see more pictures of the party you can find them here:
Mad Men Party 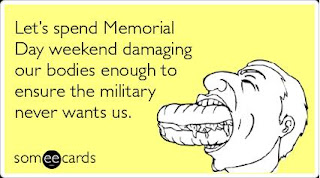 Lucas: I just poured a nice glass of lemonade into a dirty glass.  The world is against me today.  I poured it into a clean glass so we’re okay.
I would like to issue a formal correction of last weeks issue.  The hilarious quote from last week was actually said by Rachel E. Nelson (reposted for your enjoyment):
On Cathy becoming a citizen:
Shana: You can't vote
Rachel: You're a woman; you can't ever vote.
Congrats to Cathy for becoming an American Citizen, officially making her my whitest African-American friend.  Here is a picture of the American Flag (made in china) that I bought you last week and keep forgetting to give you (Casper might have gotten a hold of it as you can see…) 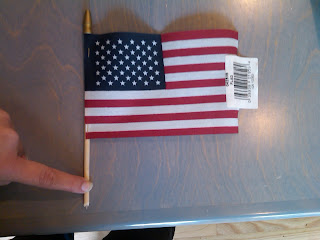 I start a new job tomorrow! (There’s nothing funny about that I just wanted to tell you.)
Posted by skcorynaffit at 3:20 PM