How I Wear "Pretencious."

My friend Cathy, when she started going into labor, posted “Owwwiiiiee!” on Facebook.  The comments that followed included my oh-so-helpful “Have you had that baby yet? This is TORTURE for us! Let me know when to bring over champagne and cupcakes.”  This led to Jen saying that I could bring them over to her place at any time, and Laina telling me to stop by her house first on the way.  Shane reading the story unfold, said to Cathy, “I don’t know what just happened, but I think we’ve been uninvited and the party is moving somewhere else.”  I told my sister the story and she said, “Yea.  They should get used to missing a lot from now on.”

Shane told us that Cathy was a real champ (even making jokes throughout the labor).  He also mentioned that he was told that the birth would be horribly messy, like the worst mess imaginable.  He, therefore, imagined holding up his son, hands so drenched in blood that it was dripping down his arms and shirt.  So compared to THAT, it wasn’t so bad. 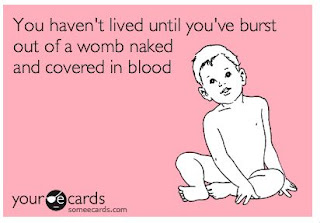 Cathy: My dad brought his favorite teddy bear from [South Africa].
Dawne: I’m sure that he saved something special for each of his grandchildren.
Me: NOPE. Cathy is his favorite. 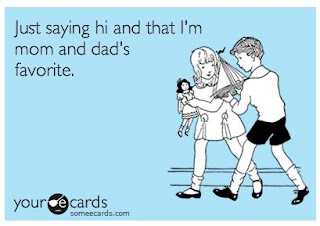 Lucas: I better make sure that the woman I am going to marry has a high pain tolerance before I ask her to marry me.
Me: How are you going to test it?
Lucas: Sorry, I pushed you down the stairs. Accident! 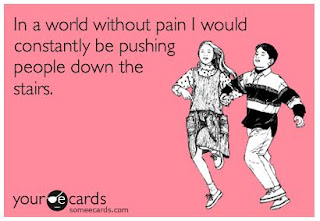 Shana brought all the things you can’t have during pregnancy like soft cheeses and a baguette
Lucas: Nice! A sword training so he can be a young beast master.

Lucas: What does this “Baby code” and “Adult code” mean?
Shane: It’s a new ID system.

Lucas: My inner sole is worn.
Me: Metaphorically? Your soul is tattered and torn by the hardships of life?
Lucas (point to shoe while I give him a hard time): No – look.  It’s worn down to the core. Use your eyes! 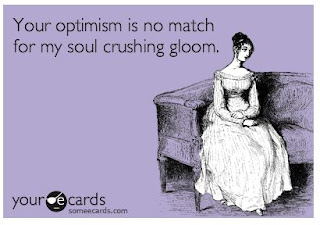 I went over to Liana’s on Thursday night to watch “It’s Always Sunny in Philadelphia.”  Funny things were said:

Laina: Do you watch big love?
Mark: I like the idea.

Watching a commercial:
Mark: I believe in not using a dirty catheter.  That's a good message but I don't want to hear it.
Jen: Is this a big enough problem that it needs to be a commercial? That’s the real concern here.


Mark: I was reading Morley and Me to a girl and I was getting choked up but she was bawling.
Me: She must have looked like a mess – you should have slammed the book closed.
Mark: And said “Is this how you're going to behave!? DOGS DIE. That’s right.

I am hanging out with the Lucanator and two puppies this week while the real adults are off in Chicago watching Kara and Amy play Volleyball.  Friday morning, Casper’s exuberance caused me to be punched in the nose.  I thought for a moment he broke it, but then it was fine… until I suddenly had a monumental headache... or maybe it was me taking nail polish off in an enclosed car... one of those for sure was the culprit in my teeny crisis. I guess love really does hurt (ooh! Maybe Luke can use that on his future bride!) 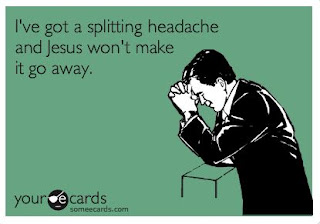 So, we’re in the car driving to school…

Me: How about that planet made of diamonds they found.
Lucas: I bet diamonds are so not a big deal to them.
Me: Today, I bet they’re version of D-Bad is Diamond Bag (Instead of Dirt Bag).
Lucas: I think most people mean douchebags when they say D-Bag.
Me: I know, but that ruins my joke.
Lucas: Speaking of which I’m making a list of all of the things I hate.
Then he actually pulls out of his book bag and physical list of things he hates, including broken guitar strings and douchebags
Me: Do you hate the people who are douchebags or the object?
Lucas: The people – maybe I should but that in parenthesis.
Me: Or just write “You know who you are.” 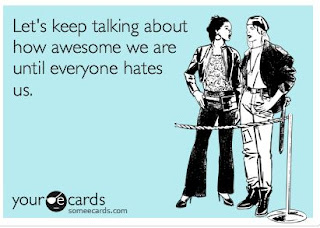 Me: I'm fired up, frankly.
Rollie: that would be a great shirt, front: FRANKLY, back: I'M FIRED UP.
Mat: we should start a T-shirt company, Tiff you write all the T-shirts and I'll design them. Better yet Tiff you just talk and Rollie will tell you when something is T-shirt appropriate and I'll design them.
Me: My assignment: Talking. Done and Done.
Rollie: I like that, when do I get paid?
Me: up front preferably.
Mat: when you produce results, and you have to go through a review process, and set goals yearly.
Me: sounds like a lot of judgment. I don't care for that.
Mat: Could that be a T-shirt?
Rollie: Frankly I’m a little less fired up about all this. 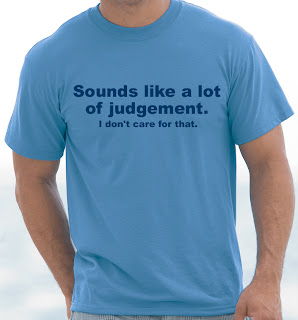 This weekend, I had every intention of partying so softly.  Friday was totally low key.  Saturday, just like Thursday and Friday, we were all up at 6 am (when I say we, I mean myself and the puppies.)  Since I was up, we made another trip to the dog park (three days in a row Dawne, if you were keeping track.)  Then stuff happened that’s not important, and then Luke and I ran over to the Bravern in Bellevue (Sooo classy.  We decided that, like Julia Roberts in Pretty Woman, we were candidates to be asked to leave at any moment.)  Being able to walk out with 120 Trophy Cupcakes might have been the only reason that we weren’t.  This was followed by some disappointing news for Lucas, so I asked him if he wanted to some Jamba Juice.  Lucas replied, “Yea, I could use something sweet in my life.”  After taking the first sip, I mentioned something about a taste explosion happening, but Lucas made it better with, “It’s like a party in your mouth and everyone’s drinking.”

The cupcakes were for Becky's big dinner.  Becky managed to get 92 homeless people to attend her big feast at Fare Start  where everyone was super excited to be there, got lots of good food and left with a brand new back pack of supplies.  Becky didn’t want us to give the impression that we were perfect goodie two shoes (that’s a weird expression isn’t it?) We ensured the message would be received my making our own shirts with a list of our faults, and then she wanted us to write “Who would you give a Second Chance?”  I know, it WAS hard to choose from my many faults, especially on the fly, but I went with:

I can’t take anything seriously.
I’m not so good with the Listening.
I am not a hugger. Seriously.  (I also don’t have a thesaurus or a dictionary.)
I am a Chatty Cathy (named Tiffany. )
To whom would you grant a second chance?
I am also pretentious. *

*But I spelled it “Pretencious” ironically.

Later, we were kidding around about no one being perfect and that everyone’s hands are metaphorically unclean.  I was like, “Man! That’s what I should have put on my shirt, “My hands are unclean.” And then people would have been like…uh, you didn’t make my dinner did you? Gross. 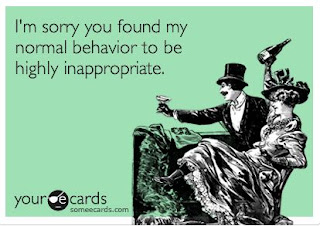 After that, I headed over to Hudson’s for Jen’s belated birthday dinner where the topic of Google + and circles came up.

Hays: I just have one circle for “Nutjobs.”
Jen: Michael has one of those too with a totally different meaning.

Then we headed out to Goldies/Bogarts for Karaoke where I crashed and burned trying to sing I Try but Macy Grey (I totally don’t know anything beyond the chorus, now I know.)  But didn’t COMPLETELY butcher the Sesame Street Theme Song, so I guess we’re a-ok.  Now, I also recorded Shana singing some Cher for Jen, but I’ll have to post that later because I’m having some technical issues.  But when I do... it's going to wrap this up REAL NICE.

Posted by skcorynaffit at 10:57 AM