How NOT to Leave an Impression

I got into work on Monday, after a week of vacation, and all of my stuff (including my monitors etc.) were missing.  Awk. Ward.  I did finally get my stuff back today so I went ahead and told everyone I was taking more time off next week, and then again the week after that. :P

Lucas: I need to get some pumped up kicks.
Me: They are pretty cool.
Lucas: Yea, I just listened to a song that was talking about shooting people with pumped up kicks, so now I want them.
Me: Super advertising.

Me: How’s the new band sounding?
Lucas: Not bad.  Well, more like somewhere between not bad and really bad.

Maureen: You cannot keep my son.
Dara: I know that.
Dara's son Jason: It's in Kevin's room! (as in, the room Dara has given my nephew.)
Maureen: Seriously.  You cannot keep him.

Lucas: I slept in my brother’s room because it’s darker in there.  I figure if I don’t have crabs, then I win.  But I haven’t checked my pubic area yet, so the jury is still out.

I had breakfast with Becky on Thursday at Microsoft, and I noticed this sign in the courtyard: 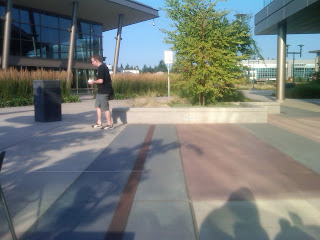 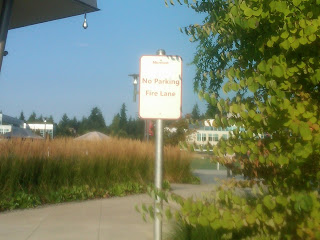 Dawne: Lucas has been having us watch this Karma show that has been teaching us to be better people.
Me:  It’s not called Karma.  We’ve been watching My Name is Earl.
Jordan: How sad is it that we are taking life advice from My Name Is Earl?

Lucas: Jason Lee is my favorite skateboarder.  He signed a poster in Zumies by writing, “Bellevue Zumies is the best Zumies.”  He’s so cool.

Lucas: This guy at the Skate Park told me I’m so straight edge that it is impossible to communicate with me.
Me: Why would he say that?
Lucas: Well he was talking about Candy…
Me: like LSD or Ecstasy or whatever?
Lucas: Yes, and I was like… Candy!?  I Love Candy!!

I went out to a dinner party on Thursday where I met a guy who shares my love for all things Christmas.  Rachel's friend was sitting near me, and at one point she commented about my eating habits.  The gentlemen next to us asked if we knew each other.

Me: Nope. Never met.
Gin: No, but I can tell from looking at her she is a super picky eater.
Me: Yea, and frankly I think she is terribly overweight and shouldn't talk.
(Did I mention that Gin is 8 1/2 months pregnant?)

Lucas went to see Avi Buffalo on Friday while I was out having drinks with Missy and Charles.  I guess the lead singer made a comment "This guy's facial hair looks like my grand pappy."  To which Lucas, up in front, laughed hysterically. The lead singer looked right at him and said" What are you laughing at? Nothing is funny about my grand pappy."

We were shopping last week, and when we got to the car, I was unloading the shopping cart.  I looked up at Luke and said, "Luke! Are you going to help?" to which he replied, "Sorry, I saw my reflection in a mirror. You know how it is." 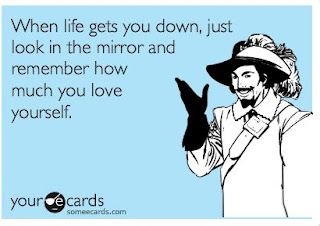 Saturday morning was the traditional, sitting around drinking coffee and playing on our own individual electronics in the kitchen.
Me: What did people do at breakfast before technology?
Uncle Ray (iPad in hand): Be social, communicate with each other.
Me: We are collectively working on sending out an invitation, how much more social do you want us to be?
We went to Seattle for breakfast/lunch and hunted for backpacks at rite aids.  On our way back, I invited Jen, Hays and Lily over for some pool and boat time which was VERY fun.  Then Becky came to pick me up to go to Dave's BBQ.  This guy had like 70 pounds of ribs, homemade sausages, lamb shank, brisket and salmon.  It was meatopia. 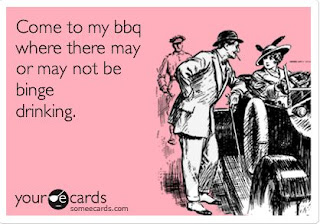 I have been trying to explain to people that I am not memorable.  And every time someone protests, there seems to be a perfect example that comes up to confirm my suspicions.  There was a guy that I met at the WizKids store 8 year ago, we had hung out, played apples to apples together, I thought we share a moment, but alas, when we met on my first day at Pokémon, he had no recollection of me whatsoever.  Naturally, when I was inebriated at the BBQ on Saturday, in front of huge group, I decided to bring it up, all in good fun.  While I am telling him, it’s totally okay, lots of people don't remember me, this guy Eric sits down next to me.  He's looking at me like he totally has never seen me before and introduces himself.

I told my Uncle Ray this story the next day, and he was like, "People forget things.  How long ago did you work with him?"  3 months ago Uncle Ray.  3 months ago. 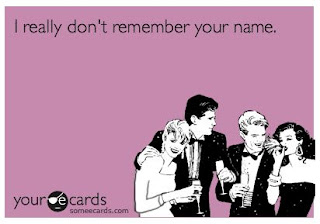 There was a girl at the party who had two underwear mentions. First, that she could put her foot on her chest, but not right at that moment because she was wearing a dress and no underwear.  And then, later, that when she was little she thought changing her underwear meant putting on another pair over the ones she had on until she was in a changing room at JC Penny, and he mom was like "Why are you wearing ten pairs of underwear."  I don't even know if I caught this lady's name.

Me: We need to hit up Border's before they close.
Lucas: They have dvds and cds so you don't have to touch those paper things. I learned that from my grand pappy.

In more ‘uke news (I’m trying out a new nick name), ‘uke bought a mini, hot wheels branded, skate board covered in chalk from the small child that had it before him.  He plans on rockin’ it at the skate park today.  I can’t WAIT to see how that goes. 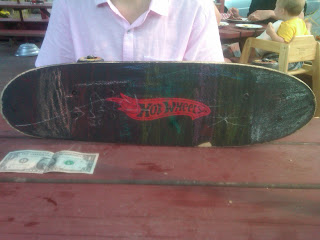 I was totally convinced that Cathy was going to have her baby on Saturday, 9/10/11 at 8pm.  Shockingly, I could not WILL it to fruition – but today is the big day! Yay! 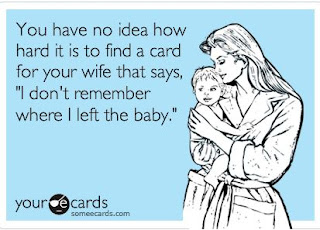 I ended up leaving Borders with 20 pink backpacks - in case anyone was curious.  OH! That reminds me, Becky, who you hear about all the time is doing yet another thing that makes us all feel like we should be better people.  She is throwing, on her own, a big banquet for 100 homeless people next weekend.  She is asking for people to sponsor/donate backpacks containing a toothbrush, toothpaste, floss, soap or wet wipes, deodorant, bottles of shampoo and conditioner (can be bigger or a some small ones), 2 or 3 pairs of socks, a comb or brush, razors, band aids or small first aid kit, and a bottle of water or two.  If you are in town, and want to help out, I'll pick up the supplies from you before Friday.

Posted by skcorynaffit at 12:50 PM