Happy Monday!  It was a glorious weekend!  I haven’t put the top up on my car since Friday.  Partially, because it’s gorgeous out, and partially because I’m afraid of putting it up and down after 6K later, I just picked it up from getting a new, not cut top.  The windshield is still on order from Sweden. 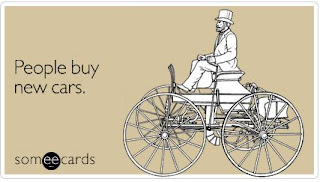 I’m going turn back time, to a moment pre-weekly updates.  4 or 5 years ago, after we did some shuffling of rooms and I ended up with a really awesome deck, I went out and bought some chairs.  I invited Rach up to hang out with me on this awesome deck on my new chairs.  Dawne and Jordan came home and were walking up to the house and I yelled down:

Me: Check out my new chairs!
Jordan: I just bought new chairs too!
Me: Oh yeah!?
Jordan: Yes!  They come packaged inside a new Porsche.
Me: You’ve completely stole my thunder.
Jordan: Okay. I didn’t buy it yet.  I saw it, and I decided to come home and if I still wanted in an hour, we’d go back and get it.  So… will you drive me back there in 15 minutes?

There is a reason that I told this story.  A couple weeks ago, Dawne and I decided that seeing as we already had matching purses, the next logical step was to get matching Jeeps. On Friday, Jordan traded in his bright orange Porsche (with 1200 miles on it) so that Dawne could get an orange Jeep.  Dawne picked up her Jeep on Saturday, and it really is super cute.  Though, yesterday, Dawne and I were laying out on driveway in the sun (as we have been doing since I was one) and I was very pleased that I did not get a matching Jeep.

Me: The car dealer guy said that the top was easy to take off if I had a significant other, and as I’m watching your significant other and son take this top off, I realize I haven’t put in the years of creating manual labor that you have.  I mean you made three of them from scratch.
Dawne:  Yeah, I’ve put a lot of years in and it’s finally paying off. 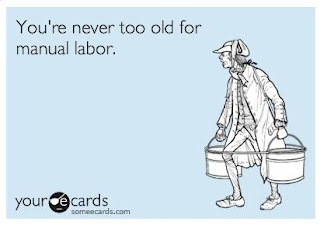 I’m going to test drive another car today, so I’ll let you know how it goes when I’ve finally purchased a vehicle.  (I don’t want to ruin it.)

Friday we went to see Dark Shadows, which was just okay.  Saturday we grabbed brunch with the Smalls.  When I went to ask for a table, Zach stopped me and said, “But what about the small, Small?”  Good point.  Fynn, AKA our entertainment, does like to show up with his parents these days.  Lucas ordered the Beignet’s which came with a sauce that looked a lot like condensed egg nog.

Lucas: I think this is egg nog.
Me: No, I hate egg nog.
Lucas: Taste it again.
Me: It does taste like Nutmeg.
Lucas: Ugh. It’s so gross that it is called Nutmeg and it looks like that.

(There were copious amount of someecards that were so appropriate for this area that it was gross, but in the interest of keeping it clean….) 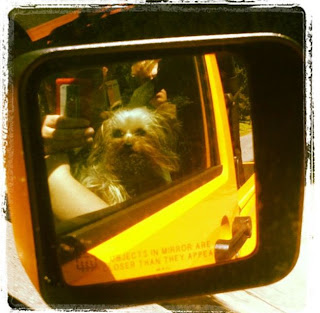 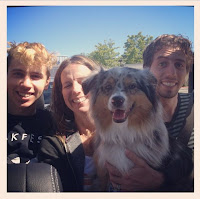 Lucas made a rap song for Dawne for Mother’s Day.  She handed her phone over to Shane and Cathy to listen to it and when it was over Shane looked at Zach and said, “What are you doing for Mother’s Day?”  Zach had gotten her a fun T-shirt, but first he handed her a card with Monopoly stickers from the grocery store to make it look like that’s all he got for her.  Zach said that he was at the store with his friends when he suddenly said, “Wait!  Mother’s Day is coming -  give me your stickers!”  He clearly knows what Dawne needs in life. 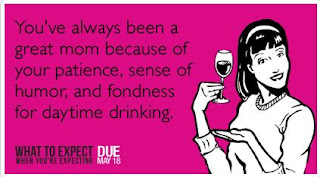 The rest of Saturday was spent in the pool, followed by dinner at the Lunchbox Laboratory with Zach, Lynn and Kelly, followed by wandering around Pioneer Square until we randomly met up with Diana and Jason.  Sunday, we piled into the Jeep for coffee and random errands (like getting matching leashes for the Jeep) followed by more pool time, then boat time and finished up with Zach and I watching The Addam’s Family while we applied aloe on any parts that didn’t get lotioned properly.  (Why isn’t lotioned a word?) Becky and Kelly finally met, worlds and lunch buddies combining.  Becky told me she got a birthday present in the mail – a pink purse from her mother.  Only, instead of packing peanuts or bubble wrap, her mother used dollar bills.

Becky: I can’t post that story on fb.
Me: Why?
Becky: Because my mother sounds like she’s the 1% that uses dollars as packing material.
Me: Honestly, I’ve done it before.  Only, I didn’t count the bills – I just put them in until the gift was properly filled and then I got a phone call from Erika asking me if there was a reason why I put $67 dollars with the present. 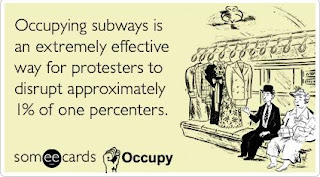 Last week I posted something on fb, and my father who never comments on anything, responded with, “Than I.”
Maureen: I thought she wrote that good:) (Love that we can torture dad on Facebook now:))
Me: And bonus! He can grammar slam us in public!
Frita: nobody sees the humor in grammar!
Me: Oh I think we do. We see it boldly with 32pt. font. :)

Then when I spoke to him he got all upset that I was telling people he needed to read a big font.
Me: I was just trying to translate “hear you loud and clear” for type.
Frita: Oh sure, you just wanted to make me sound old.
Me: Of course not!  Man, some people.  They turn 75 and get all sensitive.
Frita: No true.  I’ve always been sensitive.  My mother said that all the time.
Me: Now I know where I get it from. 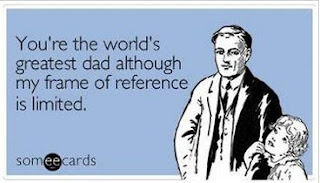 Frita: Please do not go comparison shopping. You will be so disappointed!
Me: Not a chance, Frita. I mean seriously - I've got a lifetime guarantee on this model that only requires maintenance hugs. Plus, where would I find another that has matching eyes and sarcastic wit?

Frita: Kevin routes for anyone who is playing against the Rangers.
Me: That’s what I do at Mariner’s games! 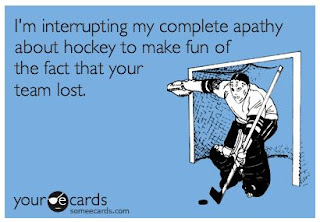 And, finally, Happy Belated Mother’s Day to all of the Mom’s out there.  And a very Happy Birthday to Frita, Maureen, Kyle and the 30 and sober Debina! 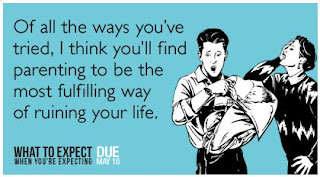