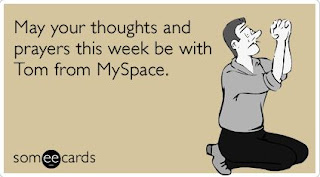 After finding seeing the bill for nearly 6 grand to fix the cut into my convertible top, and having to wait an hour for someone to find an air filter that fit my car, I decided that I should probably get another car.  On Saturday, I saw a picture of the car I wanted.  On Monday, I went for a test drive at work and then on Monday night I came home, convinced Zach to go down to Tacoma with me, and we went down and bought my very first new car.   Her name is Stella Adorable. 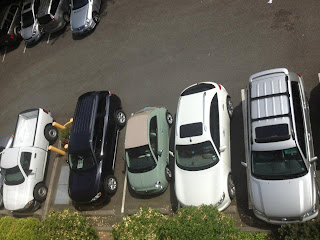 Guy at the dealer: Can I grab those keys, I need to wash and fill it up and I'm not going to push it.
Me: Careful it's new.

I felt bad about the way I left my Saab.  I did pause to take one last picture. 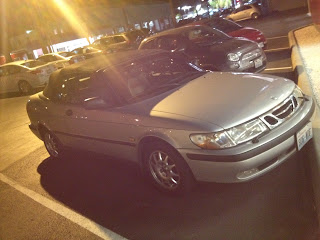 I also had to spend some time explaining why Saabs have "Stealth Mode" - which is basically a button that you push and all the lights and gauges go off.  Strangely enough, yesterday, as Zach and I were trying to play, "Name what Disney Movie this song came from", without looking at the name of the song, we realized the real, true reason, one would want to Stealth Mode in a car.

It took much longer than I thought, and I'm making a formal apology to Zach for not only subjecting him to this torture, but also because I didn't feed him and by the time we left the dealer, both of us decided getting home was more important that food.  Tuesday night, I brought Stella over to meet Rach.  As we were driving out of her neighborhood we heard someone compliment Stella and say, "I drove a real one in Italy!"  Then we parked it on the street, and ate outside at a delicious Puerto Rican place so that we could still stare at Stella. (When we ordered drinks, I was told that I was making a terrible decision.  I guess... Thanks?)

Lucas: So how are you liking your car?
Me: I'm lovin it.
Lucas: Like McDonalds?
Me: Yes.
Lucas: So when you're done driving it you feel a little bit bad about yourself?

Shana: Thank goodness it's a convertible otherwise your personality wouldn't fit in it.

I got an IM from my boss that said, "We are outside looking at Stella.  Come on out when you're ready."  Clearly, I'm not the only one who is filled with joy upon looking at Stella Adorable.  OH! This has nothing to do with anything, but there is this super talented artist who works at 343, and he friended me on fb.  He.  Friended. ME.  (I'm ignoring the fact that he has 1700 friends.)

On Wednesday, I met Becky for a birthday breakfast.  I had tied balloons on her chair and had cupcakes and candles on hand.  Meanwhile, she walks in with a foot tall birthday crown.  Naturally people kept wishing her a "Happy birthday!" She then turned to me and said, "How does everyone know?" 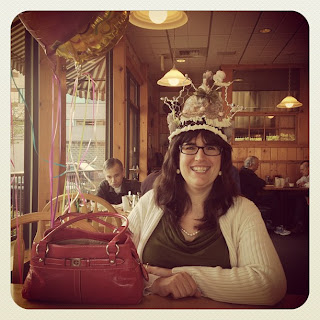 After work, I met Becky at Gold's Gym for a She Bam! Class.  Basically, it was awesome and made me want to switch gyms just so that I could take this class with her all the time.  (She Bam is basically like jazzercise with less structure.) 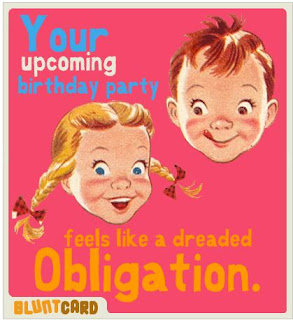 Thursday and Friday, I did a 2 day Pandora tribute to Donna Summers and I swear it caused my whole system to be wrecked with anxiety.  Note to self: Disco is for Dancing, not working.

Me: Stop using your toes to open the refrigerator.
Lucas: It's more efficient. Our ancestors have been doing this for years and years!
Me: Opening refrigerator with their feet?
Lucas: This is about evolution!
Me: Let me get this straight; because of evolution, if we don't use our toes to open the refrigerator, toes will be bred out of existence.
Lucas: Yes, because people will only want to mate with people who use their toes! It is because of people like you we've already lost our opposable thumbs on our feet.
Zach:  It's still gross.  Stop doing it. 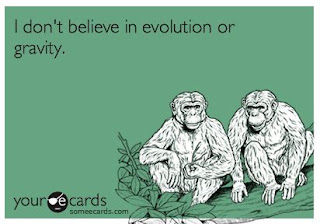 (After Lucas said something funny that I don't remember:)
Zach: What's that from?
Lucas: It's not from anything; it's from life.

Bright and early Saturday morning, we went down to the clean up the beachfront.  During the winter, the water level of the lake gets so high that it comes up all the way to the studio.  When the water level goes back down, we end up with sand, rocks, and random stuff all along the beach.  (One year, a Jet Ski had washed up on shore, last year all of the slate from around the campfire area had been dislodged, and we had to find and reassemble the slate.)  This year, we basically had to shovel a lot of rocks and sand (it was nearly 4 feet high in one area.)  Lucas and I ran to buy a wheel barrow and extra shovel, and as we were leaving Ace Hardware, a woman yelled to us, "Have Fun!"

Me: That was weird.  For all she knows, we could be disposing a dead body.
Lucas: With a wheelbarrow and a shovel?
Me: The wheelbarrow to carry the body, and the shovel to bury it.
Lucas: Why do you know about this method?
Me: Because I've watched TV before. 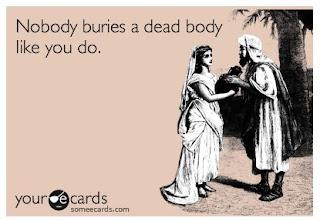 This is what the bucket that we were using to haul rocks said: 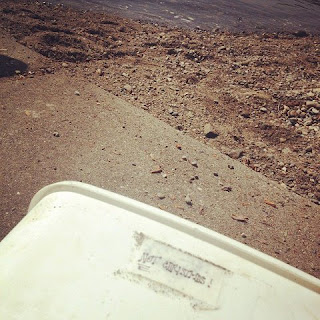 When we were all done, I was feeling pretty good about the whole project.
Me: That wasn't so bad.
Dawne: I'm exhausted.
Me: Yeah, but it's not nearly as bad as when we carried cement blocks up the stairs for 4 hours.  It's all about perspective.
Zach: You know, if we had kept those cement blocks down at the beach, we probably wouldn't have to do this every year.

We then rewarded ourselves with lunch (we took Daisy the Doozer (Dawne's new Jeep) and Stella to Tu Casa) and  then took a boat ride.
Zach (looking at a house on the lake): You know it's fancy when they cover the drive way.
Me: Not the fact that they have a helicopter pad? 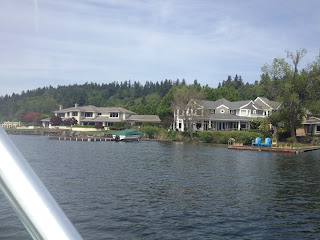 Then we took a swim.  Nala jumped right in and started swimming around, and then, soaked was huddled in a towel.
Zach: Heh.  Nala is an ongoing joke.
Then Casper also got out of the pool and used my towel to dry off.
Me: Casper!
Zach: You should never have taught him how to dry himself off.

Saturday evening, Jordan's cousins Lynn and Mark came over to hang out.  We headed out for a casual dinner, and due to the fact that it was a prom night and restaurants were full, we ended up at Ruth Chris'.  Naturally.  Then we came home and Luke and I vegged out in front of the TV to watch some White Collar.  The internet was a little sketchy and kept pausing.

Me: This is rough.
Lucas: This is soul crushing
Jordan: Maybe we should watch this tomorrow.
Lucas: I want it now. I want it all.

On Sunday, a similar situation happened.  We kept blaming Zach for downloading something upstairs.  This time when the show paused, Zach was just pulling into the driveway.

Lucas: Zach is clearly downloading something on his phone.
Me: Seriously, Zach?

I was totally kidding of course.  Zach Rocks.  And to prove how much he rocks, he took yet another ride down to Tacoma with me yesterday to get this protective plastic coating put on.
Zach: I'm surprised you didn't just say you could do it yourself with a little shellac.
Me: I got this! Hand me the saran wrap.

As I was signing paperwork, and getting the keys to the loaner car, the dealer guy was explaining some things about the car.

Zach: Did you say the car had a half gallon or half tank? Is this like, "Just see if you can get to a gas station I dare you?"

Me: My cousin, who just got a Jeep, is also bringing her car in to get the protectant on it.
Zach: I didn't realize my mom was your cousin.
Me: Which part did you forget, the part where I call her dad Uncle Ray or the part where she calls my mom Aunt Karen?

Zach and I drove a little further and also ran around the Capitol building (in Olympia) and I Instagram'ed the hell out of that place.  I figured we qualified for oversized parking: 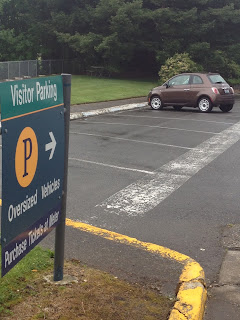 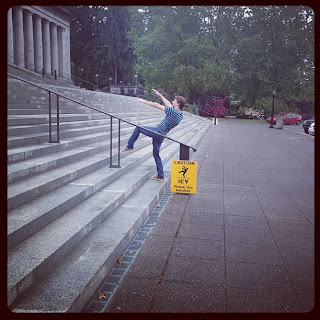 Later at home, Jordan pulled in, saw the Fiat in the driveway and said, "Tiffany's car changes color in the rain!" And no joke, Lucas said the same thing when he saw it this morning in the driveway, only he thought it was an awesome bonus feature.  :)

In case you all haven't seen it yet, this made me giggle a lot: 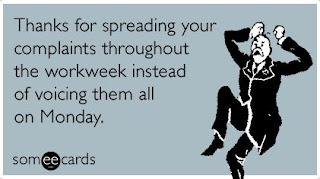 Posted by skcorynaffit at 1:56 PM