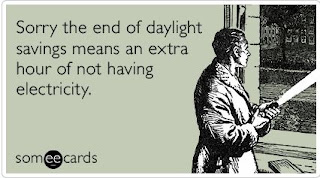 On Wednesday we went to see The Addams Family at the 5th - hilarious, really well done (she said knowing you won't be able to see it because it took so long for me to write this).  We met at Purple which is always Winerrific.

Rach: I'm still getting used to these glasses.
Me: Look at all of those fake heads!
Rach: I don't see them.  They [glasses] don't work ALL the time.
Me: See, there are fake head up there in the empty seats.  I guess to fool the actors?
Rach: It's a full house!  You guys are doing great! 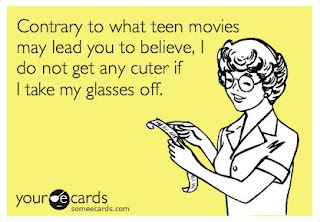 Halloween was pretty uneventful, though Lucas did buy fish.  Genetically altered fish that glow under black light.  I'm sure they love that. I spent that time in the store with Percy thinking that everything was too big for him.  Maybe one day.

On Friday, I walked out of the office with Halo 4 in my grubby little hands and immediately thought, "I hope I don't get mugged."  Then I proceeded to pick up the dogs and tried to take them to the park in the rain while I texted Kelly.  The conversation roughly went like this:
Kelly: We should play Halo 4.
Me: We should have a party and have everyone over to play!
Kelly: Like a LAN party?
Me: YES?
Kelly: Are we allowed to play?  What if we get banned for life?

Eventually, I picked up Lucas and said I was going to set myself up so we could play.  He told me that was going to take all night.  He was wrong.  It only took two hours.  Loaded up with my gamertag, extra bonus stuff and the ability to play with others, Lucas and I played the first mission and then went to bed.  (And by play, I mean in half of it we ran away from the enemies to get to the check points as quickly as possible.) 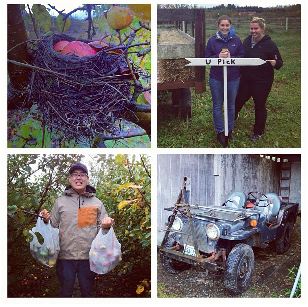 On Saturday, I went apple picking with Kelly and another co-worker, Albert.  We are all in the "Try New Things Club", and for Albert, picking apples was a new thing.  We get into the car and Albert says, "We're gonna be like locust on these trees. Don't let an Asian near something cheap or free."  Then we grabbed some Starbucks before driving an hour and 40 minutes to our destination.  Kelly asked me to go Apple picking a month in September, and I feel bad because if we had gone in September there might have been some apples.   We saw some apples on the ground so Kelly yelled, "Hey Albert! This is how you make apple sauce!" and proceeded to stomp on the fallen fruit.  I walked off to search for some apples and returned with 7 apples.  Kelly had 4 apples on her.  Albert, had two very full bags.

Me: How are you picking so many apples?
Albert: Asian!

There was one other family walking around.
Little girl: Am I the only one looking for apples?
Mom: We are going to spend a dollar fifty on apples and fifty-five on gas.

Albert, full of apples: Look at how much of nature's candy there is!! 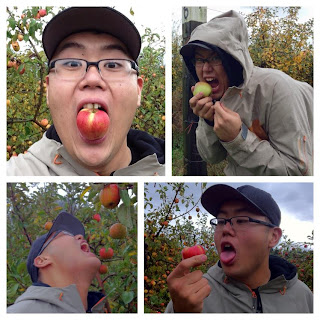 Kelly walked over to possibly get a 5th apple, (did I mention it was raining?) when the grandma in the other family said she was going back to the store area. I immediately said, "Me too! I'm going with this stranger! Have fun, Kelly!"  On the way home from the apple farm was when Kelly and I got back to the subject of the LAN party and decided we could totally make this happen.  Kelly was in charge of texting using both of our phones.  And before I knew it, I was running to the dog park so I could get back, clean the house, and figure out how I was going to hook up three Xboxes so we could all play.  When I saw Becky walk in the door I was so excited, I can't even tell you.  It was like sunshine and sanity walked in the door.  Oh and dinner and cupcakes.  In the end, I think people had fun - plus we can add "Had a LAN Party" and "Shredded a Halo 4 disc" to the list of new things we've tried. 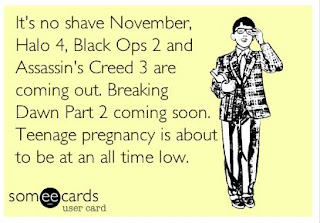 Lucas:  I remember these being super realistic like I thought they were cut from magazines. 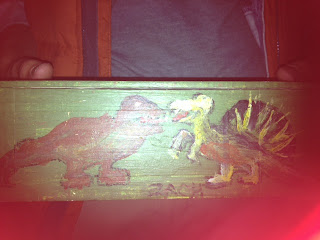 Sunday, due to our guest staying until 5 am, caused Zach and I to want to have a pretty chill day.  Around cleaning up, we managed to watch Captain America, Thor and Tommyboy.  Oh! AND Percy, at just under 4 weeks old, had two whole days of no mistakes.  As Lucas commented, he's a Potty gee.   Even last night, he was running around the kitchen, ran back to the potty pad and then went back to running around. 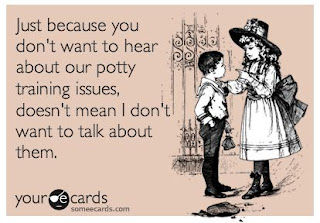 Momela: You should keep commands to one word.
Frita: If you could get Tiffany down to one word it will be a miracle.  More likely it will go like this, “Now Percy, be prepared for the command that I plan on giving….”

In the words of Rollie, “Where problem?” 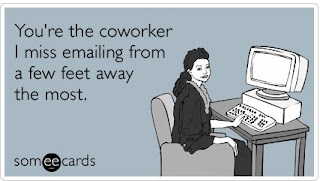 Posted by skcorynaffit at 10:52 AM