Capital B for Bruce 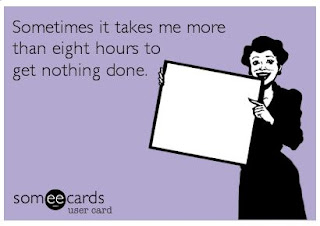 I have to back up a bit because I forgot a story last week.  Momela asked me not to get her anything for her birthday, which I read as "don't spend any money."  I think I told you that for Christmas, Maureen had given me a Penn State jersey that her sons had worn when they were teeny babies.  She had been saving it for my first born.  See, my mom has a wall in the kitchen filled with pictures of all of her grandchildren in Penn State attire.  The boys in the jersey and the girls in cheer-leading outfits.  You see where this is going right?   Dawne helped me take a picture of Percy and then she put it on a Sears-like professional background.  Then, I made two copies, one 8 X 11 picture for the fridge and then one 5 X 7 which was put into a hand/paw made popsicle frame complete with Percy's blue paw prints lining the bottom.  And, because I wanted Momela to have the full effect, this little gift included a card with Percy "singing"/barking happy birthday. 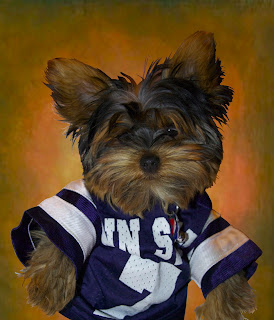 This picture was taken pre-grooming.  I took Percy for his first pro-bath and hair cut (me having to cut gum out of his paw doesn't count.)  It pained me to cut those eye brows, but I knew that seeing was probably an important part of his life.  I missed my little ragamuffin immediately.  The chick at All things Pawsitive said to me, when I dropped him off at 8:30 that she was going to take her time and give him time to rest if he got too stressed out but that she was sure she could finish by 5 PM.  What!? It only took an hour and half, but when Pam took Lucy, it took until 4PM and the chick cutting Lucy ended up cutting herself and had to go to the emergency room.  Cray Cray. 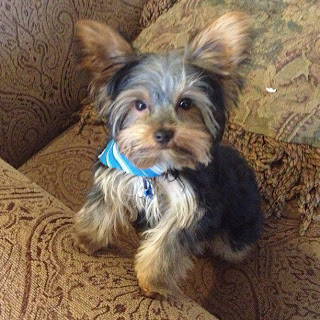 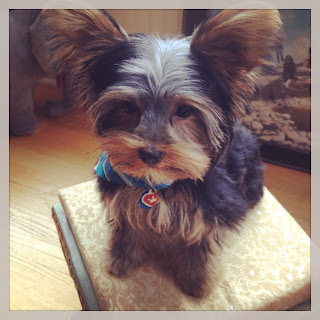 A new German came to live with us last week.  He's cool, his name is Alex.  I felt awful though because no one told him about the dogs, and he's never been around animals before and I guess he pretty freaked out about them.  It didn't help that Casper went to work with them, and that there is golden retriever at work as well.  Not only that, because he didn't tell Jordan about his apprehension towards the animals, Jordan had Alex drive Casper home on his own on Friday.  So, now we know he's a pretty good sport. 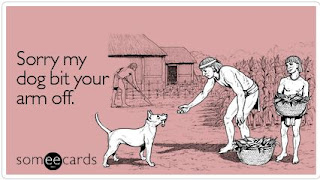 Took Percy on a little trip to NY on Thursday evening.  He got his own seat and thought that was pretty cool.   He even liked his new Percy Purse.  On the way back from NY though, I picked up the bag to check on him.  He popped his head out and surprised the chick next to me.  She said it was okay if he walked over by her... which he did.  First he hid his rawhide in the scarf on her lap, then curled up on her tray and fell asleep.  When he woke up 15 minutes later, he walked back over and into his bag where he stayed for the rest of the trip. 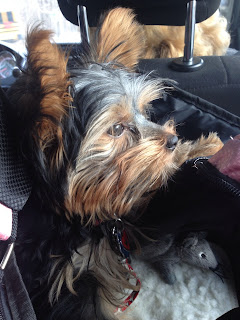 On Friday evening we went out for a "bachelorette" dinner at Traveler's Rest, which I chose - not knowing that Eva's uncle and cousin would be at, upstairs, playing jazz.  This same duo would be performing at Eva's wedding - and I had invited her cousin to dinner - but she couldn't make it because of a family thing.  What are the chances?  I had fun.  I figure, any time that we can get Evivova to laugh so hard that she cries a little, is a good night.  Here are the highlights:

Eva: Joe (her husband) loves Bruce Springsteen and wants to name the baby Bruce.  He even promised to walk the dog for the duration of Dino's life if we name the kid Bruce.
Maureen: Ask him to throw in changing diapers, and you've got a deal.  I didn't get to choose the name for my first son, and I got nothing out of the deal. 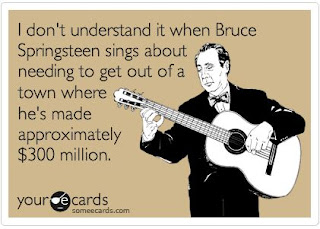 During dessert, a cart was brought around with cordials.  Jessica couldn't decide what she wanted so Eva's mom, Mary Ann told her to get peppermint schnapps (something green anyway) while Mary Anna got an amaretto.

Jessica: I think this is actually Nyquil.
Me: Now you know.  If you don't make a choice we'll make a bad one for you.

We told Eva should go with a cherry cordial because "Bruce will love it."  At that point, the waiter understood that the bride drinking Shirley Temples all night was pregnant.

Waiter:  Oh you'd going to be a b or d.
(We all start laughing hard.)
Mary Ann: I don't get it.
Me: I think he means the shape of letters because you'll have a baby bump.
Eva: I was thinking capital letters!
Mary Ann: I still don't get it.

Saturday morning, I met up with Carla (Stacey's sister) and the girls for ice cream and waffles at the dinner.  Morgan had given Carla 6 dollars so that she could get a Hot Cocoa.  I don't know why I thought that was so amusing.  Maybe telling the girls about becoming a minister at the Universal Life Church so that I could officiate wasn't the most responsible thing for me to do because immediately Bailey wanted to know how old you had to be to perform ceremonies.  After the diner, we went to Starbucks where Morgan wanted to acquire some straws because every day she ends up spilling her chocolate milk all over herself due to the same of the tiny cartons.  I sympathized, but didn't let her take more than a couple of straws.  As we were pulling out in Stacy's FJ and there was a lot of people at the intersections, Morgan informed us that "My dad always says biggest car always wins."  I told her she probably shouldn't listen to him, and also probably shouldn't listen to me either after I thought about the stories I had told that day already.

Then we went to get our nails done.  I heard Jackie chatting up the guy doing her nails including when she said, "Could you do something exotic on my nails?"  And, that's when he brought out the fancy nail polish.  Afterwards, I stopped at CVS and got three different colors of peeps.

Morgan: I don't like Peeps.
Me: Me neither.  This is for the Peep Wars. 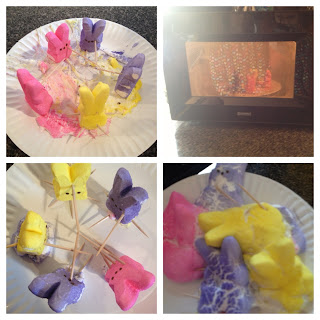 I told the girls I could probably stay a little bit longer, if I could also practice the wedding ceremony.  Naturally, the girls got all dressed up, the maid of honor and best man both had flowers, the fireplace was lit, and Morgan, in her first holy communion dress walked into the formal living room to the beautiful notes of the wedding march.  At one point, I asked the girls to hold hands, and Jackie said, "geez Morgan, we're not really getting married.  There's no reason for your hands to be all sweaty."  The two ladies giggled the ENTIRE ceremony - as I kept a straight face which told me I was ready to do this.

On Saturday night, we met at Evivova's to work out any last minute details.  Eva's brother, Alexander and his girlfriend was also there.

Alex: Should we decorate the car?
Me: Totally! You can get some of that window paint!
Alex: What about cans?
Me: Well, there are 6 soda cans on the table right now.  If you give your sister 30 cents, you might be able to take them.
Evivova: Seriously, I like collect and return all the cans.
Me: Not surprised. 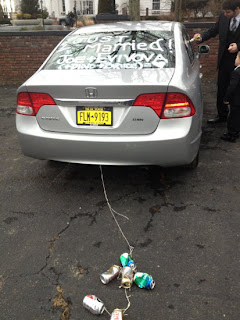 When I got to the Haymount House on Sunday morning:
Mary Ann: Eva's needs help.
Me: Eva! Your mom says you need help - mental or physical?
Eva: Both!

The whole wedding was lovely.  I was a little overwhelmed by how many complements I received actually.  My favorite part of the ceremony was the vows, which they wrote themselves and didn't share until that moment.  Eva, at one point said, "I promise to name our baby Bruce.... HAHA Just kidding! I'm not doing that." 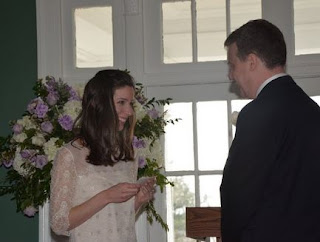 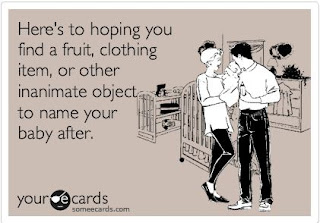 How short do I look in this picture? 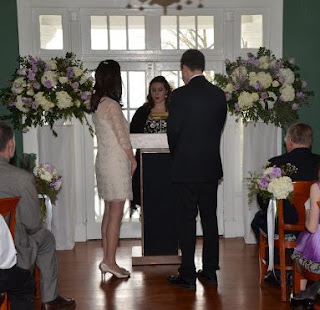 At the reception, there were little candles as favors on the tables.  Eva's dad, Peter picked one up and said, "Oh look, a garbage can." 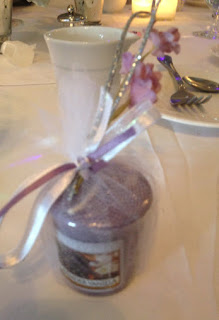 Peter likes a good argument, and frankly so do I.  I was a little disappointed that he didn't bring his A game though - and didn't mind telling him so.
Peter: Technology is ruining our lives.  Now, the SS department won't send me a check in the mail - they are now FORCING me to have it be direct deposit.
Me: So you hate convenience and frankly - the environment.

On our way to the airport, my dad says, "City is clear. There are a lot of buildings over there!"  Amazing how much of NYC is revealed when the clouds lift. :)

OH!  I know this is Tuesday, but it'll be weird if I wait to post it next week.  When I got home, the very next day, Dawne comes out dressed for the day in this outfit to which I immediately sent to Eva in an email entitled "How to re-wear your wedding dress." 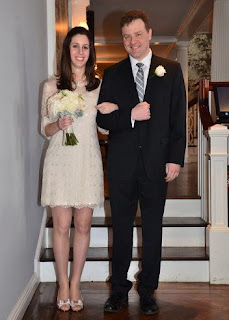 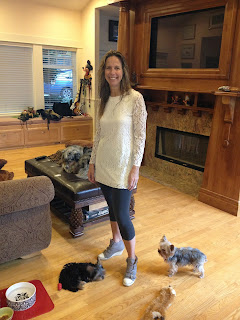 Posted by skcorynaffit at 6:44 PM