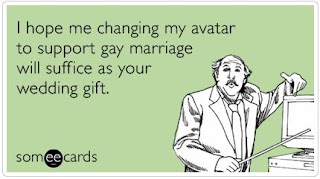 Late again!  I think it’s fair to say I’ve been busy, but I already said that the last couple of weeks so I won’t say it this time, so instead: 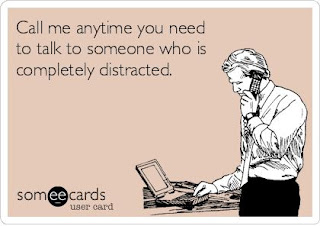 I had a dream about my Nana on Monday night.  She was in my parents’ bed, and asked me to grab her makeup bag out of her suit case.  Odd request, I thought, given that I don’t remember her ever wearing makeup, but I went on a search, because she wasn’t getting out of bed without her face on.  I opened the valise to find no less than 40 smaller cosmetic sized bags.  To her frustration, I did not locate the one filled with makeup on the first, second or even fifth try.  Finally, I handed her the correct bag.  Then, I said, “Oh man, Nana, this is awkward.  I didn’t send you an Easter card.  I’m so sorry – but to be honest, I kinda thought you were dead.”  To which Nana replied, “Yeah, I’ve been getting a lot of that lately.”  (PS: She passed away in ’93) 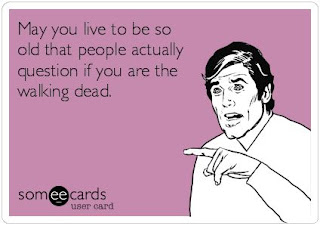 On Tuesday, I went to see Cirque du Soleil.  I'm pretty sure I've been to too many of these when I leave and everyone I'm with is all, "I've seen better."

Dawne: Anyone else think that Juggler was far too muscular to just be throwing tiny red balls in the air?
Lucas:  I'm pretty sure he was Harley Quinn's first boyfriend. 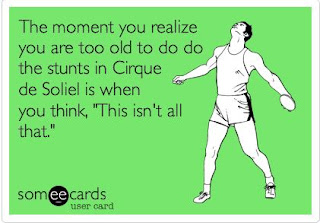 Becky had a hankering to go back to Ireland last week so naturally she went online and entered a bunch of contests to win a trip to Ireland... including one that required her to name a goat.  Naturally.

Lucas:  If taught English as a second language, every time a student spoke a sentence to me I would say, "Nice.  Now add 4 more like and end it with a though and you've NAILED IT!"

I noticed that Lucas had started cooking his breakfast and then walked away and was at the kitchen computer.
Me:  How do you make sure that you don't burn the Panini?
Lucas: Uh, I have faith.
5 minutes later, lifting the handle up and seeing a perfect Panini
Lucas: See?  Faith. 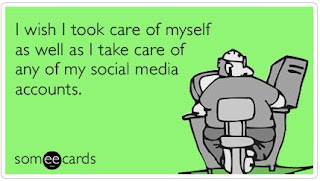 Friday night we went to see Jordan’s niece in “The Music Man” at the 5th.  Rosie was fantastic but I don’t think the Music man is my favorite – even the title font bothered me.  Up side? Got to hang out with Laina loo. J  Meanwhile, Zach had a paint war birthday party inside the house.  This was the aftermath – 4 days later.

Had breakfast with Becky last week and she was telling me about a co-workers friend who lives in Japan.  I guess it is a cultural expectation for preschoolers in Japan to have Bento Boxes for lunch (see below).  Parents create little characters out of the food every single day.  Well the mom in Japan was complaining to Becky's coworker about how she just couldn't make the lunches every day.  Becky's co-worker mentioned that there was an Indian school that served curry every day at lunch... so the mom switched her kid into the Indian school.  She said her kid comes home smelling like curry every day, but it's totally worth it. 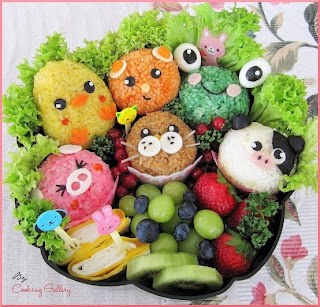 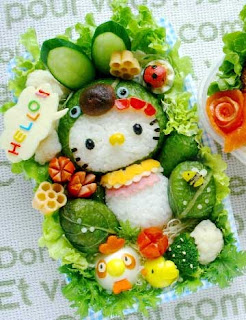 Speaking of cultural foods, for Passover, my cousins were assigned a vegetable to bring for dinner... so of course they opted for Bacon and Brussels sprouts.  On Saturday, we went to Pike Place Market to get candy plagues for the Monday Passover dinner.  Typical weekend, I looking for "Pestilence" in a candy store. 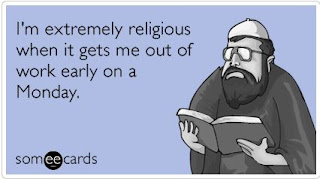 We took the pups to the park on Saturday.  I looked up into the beautiful blue sky and overhead was giant bald eagle circling.  It was close enough that I could see the talons.  I immediately picked up Percy and wouldn't you know... the eagle flew away.  Simultaneously, I heard someone behind me say, "Percy!" not Tiffany - Percy.  On his second trip to the park, he was recognized, by my boss.  :) 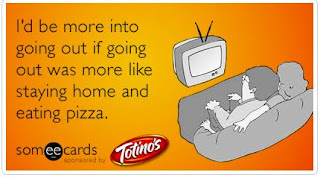 On Sunday, we went back to the park with Dr. Rach.  As Percy went running straight for a patch of high grass she spoke for him by saying, "Oh wait.  You're not a dog, you're a bush." 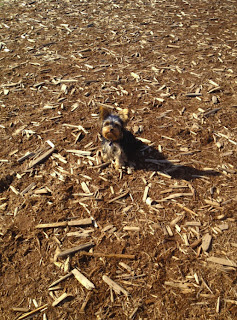 Finally on Monday:
Tiffany: So... Percy went to the groomer today
Rebecca: Hello!!!:D
Tiffany: they did a terrible job
Rebecca: Oh no!
Tiffany: anyway he's at work being awesome, but I have needed to pee for an hour now and I have a headache and could use some aspirin but I don't want to wake him.
Rebecca:  LoL, that's so sad... You get him a terrible haircut and he's being an angel for you. Oh man! This is where I wish I lived in a move and could be all like, "aw, that sucks" and then 2 seconds later walk up behind your desk and drop off aspirin and a pee bottle in person.

Alas, it is not a movie - and I was forced to wake him. 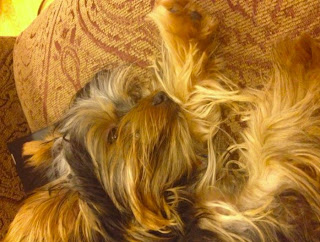 My boss had asked me to bring him to work after the groomer.  I didn't have anything with me to entertain him so my boss put on the floor a pigeon stuffed animal that was covered in fake blood and was bigger than Percy.  Shockingly, he felt the need to bark his displeasure.  Later that day, I received office wide email about security and visitors of at the office.  Boss: She's talking about your guest today.
Me: Sorry H.  I had a talk with my guest – he won’t share any of the pictures he took.  You can feel free to share this one of him though if you want.  :)
H: He is sooo cute. You can bring him in and hide him under my desk any day. I’ll have him put a paw print on an NDA. 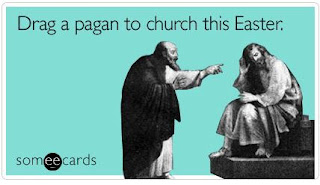 Posted by skcorynaffit at 9:33 PM