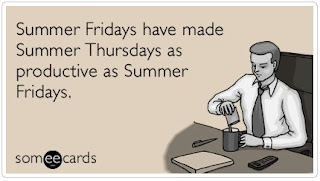 I re-discovered the joy of longer days last week.  Longer days means that when I get home, I can go for a walk at the dog park and all of a sudden it's 9 and I still think it is 5:30 full of energy and happiness.  This is the opposite of winter time when at 5:30, it feels like 11PM and all I want to do is just crawl in my bed and hibernate forever.  I imagine other people are doing better things with their new found energy - but going to the dog park seems to be choice activity.  Dawne introduced me to these secret paths through the tall grass that only dogs know about.  Now, I have to say Percy LOVES these paths.  Meanwhile, my deep rooted fear of ticks that my mother has ingrained into me from birth along with my ability to get poison ivy just by walking a field that might have poison ivy, causes the entire process to cause me great anxiety.  Then I found out when you do a path like this at 9 am, both you and your dog leave the path soaking wet from all the dew.   I guess what I'm really saying is, my life has become pretty dullsville when this is my opening story.  :) 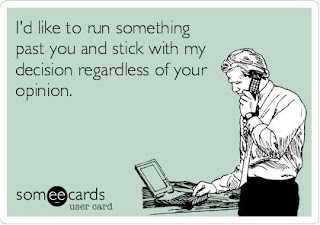 On Friday, I went to a "Laina is 40 and Mo is leaving for Kuwait" party.  Obviously, I had to get them two different cards.  While sitting at the kitchen table chatting, Mo walked in from upstairs on a conversation not at all about Mo.

Mo: Who wasn't born here?
Shana: You.
Dr. Rach: And your mom.
Kelly: Wait, what?
Me: It’s funny because it’s a “Your Mom” joke and it’s actually true because they were both born in Jamaica. 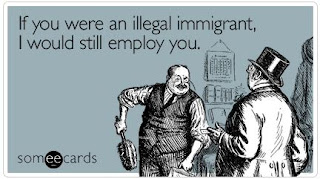 Someone told Mo that they liked his T-Shirt, and he was all excited about getting to go on the new Seattle Ferris Wheel.
Laina: We were walking out of the Four Seasons this morning, and Mo is wearing his “Great Wheel Seattle VIP” shirt and someone asked if he needed a map of Seattle and I was like “No, we live here.” 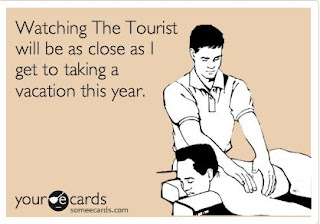 Anders was telling us about this patient who was an extreme hoarder and couldn’t move around very well.  After he was admitted to the hospital, a professional cleaning service arrived to the apartment (the kind of cleaning service that cleans up crime scenes) and they opened the doors, stepped two feet back and declared that the home needed to be torn down.  Apparently, because of a series of issues, the resident had begun to just use the every room the house as a restroom so everything had seeped into the walls and floors.

Anders: I am relatively certain that guy isn’t getting his security deposit back. 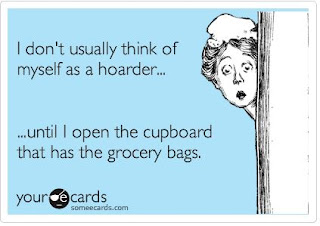 Anyway, the patient was in for testing and needed to have urine samples taken and how difficult it was to collect enough over a 24 hour period.  At this point in story, Bobbin, another one of Laina’s guests overhears the conversation.
Bobbin: You’re talking about a pet right?
Anders: No, I’m talking about a person.
Bobbin: And you’re collecting his Urine?
Anders: It’s a part of the job.  I go to homes and collect urine from people every 24 hours; it’s usually in a jug of some kind.  Actually, it's very much like a toilet.
Bobbin: What?!?
Anders:  Actually, I’m a doctor. 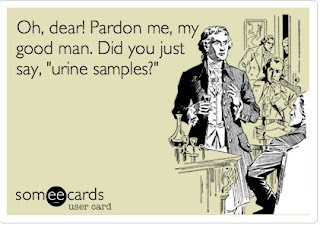 When we had gone over to Laina’s for brunch a couple of weeks ago, Mo had misplaced his wedding ring (I guess he’s been wanting to wear it early – how sweet is this guy!?)  They looked all over the house and couldn’t find it for over 36 hours.  Then, Mo wakes up, and sees it on his nightstand.
Mo: You found my ring! Thanks!
Laina: I didn’t find your ring.
Mo: It was sitting on the nightstand when I woke up.
Laina: Oh I know what happened. My dad must have found it and put it there. He does that.
Mo became immediately spooked out because of course, Laina’s father is deceased and he is creep-ed out about living with a ghost.  A couple of days later, when Mo couldn’t find the Cards Against Humanity cards, Laina found them.  She found them and put them on his nightstand, without explanation, and waited for the call.  Before Mo could get out “Did you….?”  Laina started cracking up and confessed. 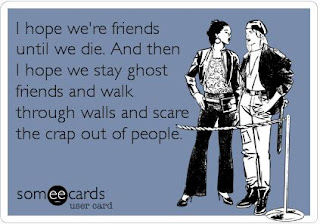 Laina’s friend Aimee was at the party.  I haven’t seen her in a while, but she was pretty proud of herself for staying up all night as a chaperone at Grad night for one of her kids.

Aimee:  Was at grad night when a 6 foot tall kid started throwing up.  When I asked what was wrong, his friend told me that he had eaten 300 gummy bears.  I asked him if he wanted some tums, and that’s when this 6 foot tall teenager, in the sweetest voice asked,” do you think it will help?”

She also has a 5 year old who has some pretty amazing quotes.

"Mom....can we listen to resting (classical) music in the car? I can't listen to rock and roll cause it will make me too aggressful at the skate park and I really need to stay loose." Greyson, 5 - Anger Management Consultant

"Mom, don't worry, nothing will ever take me away from you or tear us apart...except a Cyclops, a Cyclops could DEFINITELY tear us apart, but just that". Greyson, 5 - Safety and Risk Management

Greyson: Mom I think I’m Chinese.
Aimee: Why?
Greyson: I know how to say “Hola, Gracias and Adios.”

Greyson also asked Aimee, when her mother died, if Grandma was a zombie now.  He then described what happens after death in that you get buried, decay, your eyes start to pop out of your head, then you eat brains, someone kills you again and then you become and angel and go to heaven.  Aimee responded with, “Grandma is not a zombie.  She was cremated and sitting in that vase over there.” 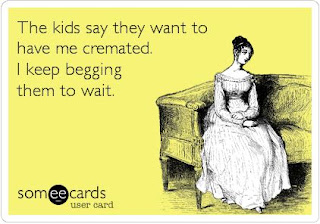 I want to say that we asked Laina how her actual birthday was, but I think she just volunteered this information.  Laina: Mo woke me up wanting sex on Thursday.  I told him it was my birthday, not his and I want sleep! I'm 40 now, I could break a hip!

On Saturday, we met Diana at the dog park.  Afterwards, we went to Starbucks, saw a car show, shopped the Redmond farmer’s market, and then met up with Jordan and Jason in Kirkland for lunch (all with the dogs of course.)  When we got home, we went in the pool, which of course Percy loved.  He still used the towel to dry himself off, but then he thought he was sufficiently dry and started running around with Shorty.  When he came back over to me he had an entire pine tree in his fur so we needed a bath. 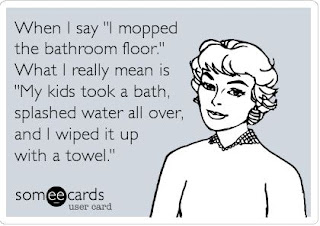 Me: Happy Father’s Day!
Frita: Your mother let me throw something out today!
Me: What was that?
Frita:  I pulled out a can of Pectin out of the Pantry.  She told me she bought it before you were born so it was probably time to throw it out.  I guess after you were born we had all the sweetness we needed in life.

Remember when I told you I had an argument with Uncle Ray about cards?  Well I decided for father’s day to create a card out of dollar bills – and he LOVED it.  J 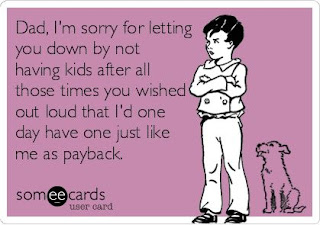 Lucas went to the eye doctor and found out that he has an ever so slight vision issue because he has a negative number? And that makes him more sensitive to external factors.  Naturally, he walked out of the doctor’s office with a receipt 800 dollar glasses.   When Dawne told Jordan, he was flabbergasted (as was I.)  But the glasses are from Denmark and look like John Lennon’s!  To counter balance this extreme purchase, we went to DSW to get some shoes (to replace the ones that Percy has destroyed and because I think the weather is forcing me to wear something other than my Uggs to the park.)  Dawne and Lucas find shoes right away, but decide not to get them because of the 800 dollar glasses debacle.  As we were leaving, they do some math and Dawne announces, “We basically saved 150 dollars today.  We should go to the outlet malls, count up all the things we would have bought there and then Jordan won’t be mad anymore!”  I don’t think that’s how it works, Dawne.

Finally, we ended the weekend with a little comedy. Aziz Ansari has a show on Netflix now, Dangerously Delicious.  I found it very amusing. Here is a little taste for you:

Posted by skcorynaffit at 3:40 PM