I need a favor.  Can you click on this link/picture and like the picture? My parents just got a new car and 100 likes on the BV Westchester side will give them a discount. Thanks!

This here is the problem with being behind on these emails, I have absolutely no idea what happened last Monday and Tuesday.  I'm pretty sure that Monday night, D&J went to IKEA and got chairs and picked up a nightstand like table for me while I vegged with the pups and caught up on the Mindy Project and Hart of Dixie.  And on Tuesday I ordered presents for the birthdays of Frita, Mo & Kyle and Mother's day (there were a lot of co-presents happening, but I think it was a good decision.)  I also worked a lot, which is a lot less interesting.

Dawne did find this gem when cleaning out her stuff though… 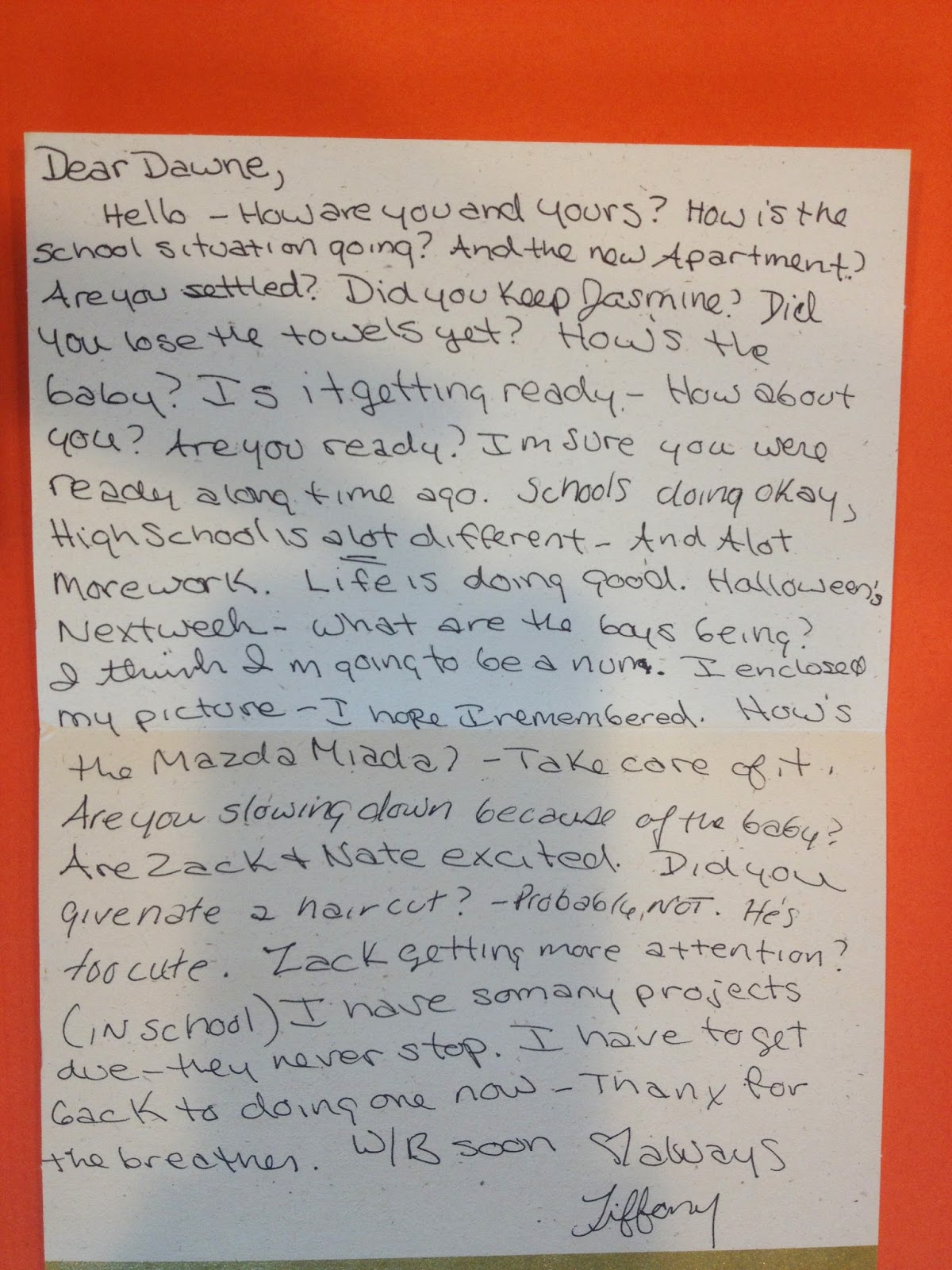 Wednesday it was a gorgeous day out, so I went to the park, naturally.  At one point Casper got a little friendly (read humped) another dog.  He then ran out of the tall grass, but the other dog was delayed a moment.
Owner:  She's getting dressed.

During another park visit, Kelly and I were walking a long when this woman from Finland unloaded a tale to us.  I guess she was driving to the park in her Audi, when a Pruis passed her in the right lane and then cut her off.  This caused her to slam on her breaks, nearly hitting him.  He then stopped, and got out of the car to yell at her, calling her a gas guzzling monster who doesn't care about the environment.  There was a dispute about ecological foot prints as well as shear rage over driving safety.  The story continued to the very end, when the woman realized she had wandered farther than she wanted to in the park and turned around.  Glad we could be an ear! Hope to see you again soon on YouTube! 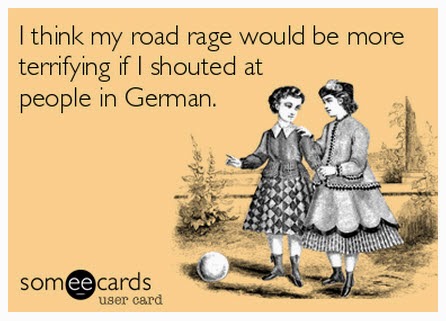 Laina asked me to go to an event, and I said, "I'm in!" without even knowing what or who it was (as is my usual.)  But when Laina asked if I was ready to see the comedian, I felt like it was my responsibility to tell her that we were actually going to see his rap/musical performance rather than his comedy routine.  15 min later, I had not only posted the tickets for sale, but I also had someone respond that they wanted the tickets.  Here's me happily excited about how easy it was to sell the tickets, and how much I heart those beautiful moments when I have the top down, SBUX on hand I'm headed to meet Percy and Friends at the park! 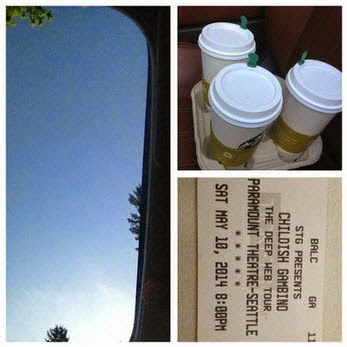 I think I might have mentioned a while back that both Dawne and Sean have similar tastes, and that independently of the other, have made design decisions and purchases that are nearly identical.  Like the time Stacey asked for a birdhouse and Sean bought her a metal pig bench instead.  Then, a little later, Dawne brought home a slightly longer version of the same pig.  As we were packing things up, Dawne suggested that now that she was moving into a smaller house that she should swap pigs with Sean.  Hahaha until I have to find a way to check that on the plane, right?  As the real estate people were walking around the house, they were asking if Dawne was willing to leave the furniture.  My first thought was a potential buyer saying, "You're leaving the pig, right?" 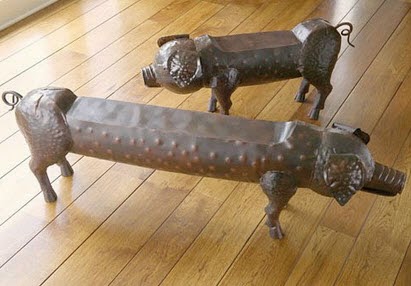 Did I mention that Lucas will be participating in a program called "Rite of Passage" this summer?  In the briefest terms, kids go out into the wilderness, without food (water is okay), and no contact with others (outside of leaving an "I'm not dead" message) for three days.  He said he was only going to pack a guitar.  Ever supportive, I told him, "You bring more for an hour plane ride."  I also mentioned that I've never been completely alone for three days, even with entertainment.  Plus, he gets real cranky when he isn't fed. But you know, I'm trying to let the little birdie fly, so... 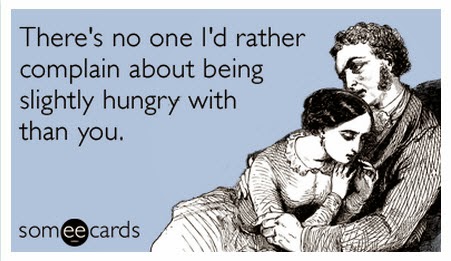 Friday evening Nater arrived from Chicago for the weekend, so on Saturday, we gathered as a fam for brunch and games.  I think the general consensus of the house was that it felt like a super fun tree fort.  Brunch was yummy, followed by a game called "Ladies and Gentleman."  Basically, the women shop for the perfect outfit for the ball and then them men have to pay for it.  Kinda great.  We hung out some more, then grabbed "linner." Then I got to hang out with Harper for an hour or two, giving Diana and Jason some time to play Ticket to Ride: Europe.   So, Diana and Jason (who are my age) are Aunt and Uncle to Matty and Dawne.  Matty is a big fan of calling Jason "Uncle Jason" b/c, why wouldn't you.  However, we were thinking that they next time they play soccer together, Jason mention that he's bringing his "Little nephew, Matty... I hope you don't mind..." 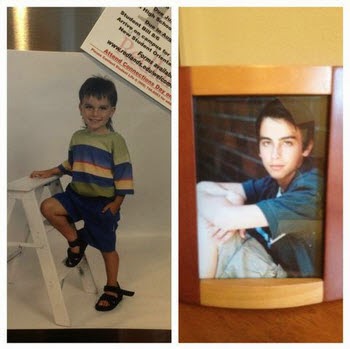 Sunday, was both Frita's birthday and Mother's day.  On the west coast, we started the day with a breakfast of blueberry pancakes followed by a visit to the zoo.  Zach is convinced that everyone on Mother's day is going to the zoo, so on our way to and from, he kept saying things like, "wrong way to the zoo guys!" and "wow, kind of late for going the zoo guys."  We ended up parking in a spot that only a Fiat or a smart car could fit into, thanks parking fairies!

Me: I love how Flamingos are always standing on one leg.
Lucas: They are really into yoga Tiffany.

We pasted by an informational panel with an elephant skull and I overheard a tween girl say, "There are dinosaurs in here?!" 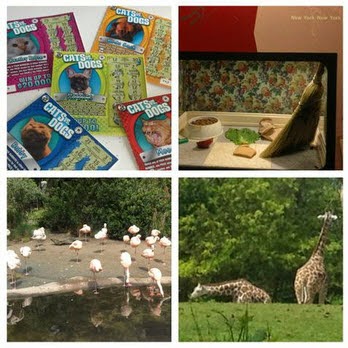 In the upper right hand picture…that is the cockroach exhibit with real live cockroaches from New York, NY!

Then we jumped in the pool, an event that Percy especially was pleased with.  After wards, Lucas wanted to watch this show called Cosmos, and Zach said he was going to go home instead of watch it with him.
Lucas: You're in a box right now called "unwillingness to learn" and I didn't put you there. 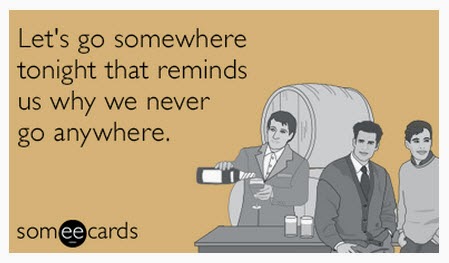