The next door neighbor stopped by on Monday to ask if he could use some of our parking because he was having people over.  Dawne said that he was more than welcome to use the parking, but that Lucas also was having people over.
Neighbor: We should coordinate better.
Dawne: Yeah, especially because Lucas has four bands coming over.
Neighbor: Oh! Live music!
Dawne: Oh no, this is going to be terrible music.  I’ll be surprised if the police don’t show up.

Such a supportive mom! But seriously though, it was LOUD and sometimes obnoxious, think white noise.  It was also wicked hot, and the party was somewhat interrupted by a rare thunderstorm.  I’m not sure what upset Casper more, the “music” or the thunderclaps, but either way, he was not as cool, calm and collected as Mr. Perseverance.

I think I may have mentioned that a couple of us have been doing this “365 Grateful” photostream thing.  I mostly remember to post something because Laina is always on top of it.  It’s a struggle though because while I have a lot to be grateful for, I don’t always take a picture it.  While Laina’s been on her honeymoon, I’ve gone a long time not updating and then posting 6 in a row.  Jen suggested that we all just decide to quit, and my first reaction was, “NOOOO!” I’m really appalled by the idea of not finishing something that I’ve started.  Or breaking a patterned action that I said was going to do.  Like going to trivia on Thursday’s and Family dinners on Wednesday. Or writing update every week. :P  Maureen said we get it from my parents.  It’s probably also why both of us HATE being late.  Mo said the only way she can be late for something is if she actively plans to be late, and even then, it’s stressful.  I haven’t asked Sean yet, but I think I know him well enough to know he’s in the same boat.  Either way, quitting doesn’t seem to be an option.

D, J & Z all left for Gen Con on Tuesday.  I know there are a lot of people whom I have not seen in many many years, but I can’t say I was sad about not attending.  Especially the mad dash to get everything done before you leave, and the incredibly long hours working the booth.

I think it was Wednesday when I asked Ally, the little girl down the street, to come over and walk Percy and Nala while Casper was at Marymoor.  She came over, and Lucas handed her Percy to look for Nala.  Aly put Percy down, with the door open, and he ran off.  So then they couldn’t find Percy or Nala.  I got a call from Lucas over and hour later saying that they couldn’t find Percy, even though Lucas and Uncle Ray had been walking the neighborhood.  I came home, walked in the door and called Nala to check on her and both Nala and Percy came running out of my room.  Later, Uncle Ray would say to Percy, “I’m not talking to you b/c you wouldn’t talk to me today!” That’s tellin’ him!

Lucas: I know that little girl is young…
Me: Yeah, she’s really young.
Lucas: But if she’s going to be in the dog business, she might want to learn to secure the dogs while the door is closed.
Me: Yup.
Lucas: Also, while we were looking for the dogs, she kept looking at me weird.  That’s when I noticed what shirt I was wearing.  I immediately put on a sweatshirt even though it was 95 degrees out. 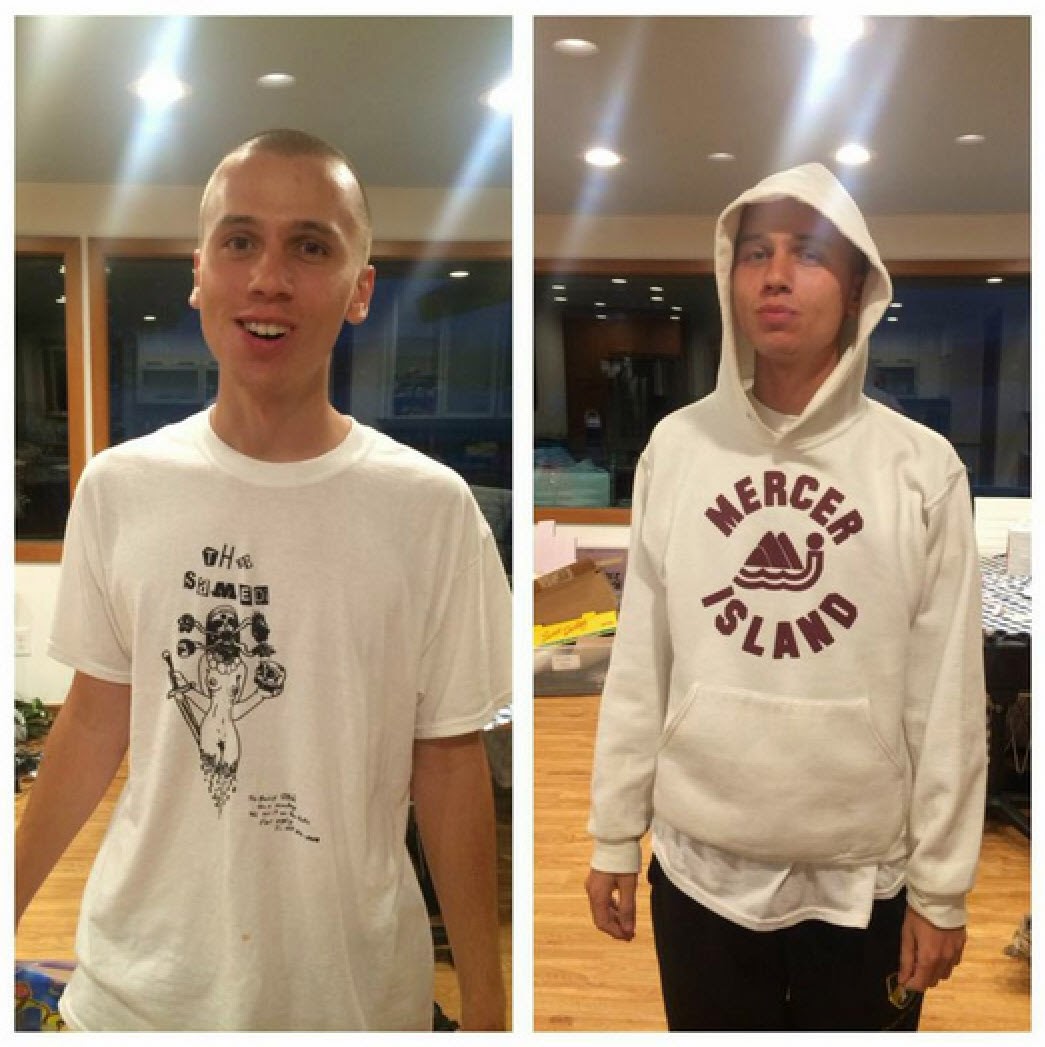 I’m going to miss gems like this around the house.  Entitled: Free Painting, 10 Dollars.  Although, it looks more like $9.99 to me.

I want to give a shout out to Mo.  While teaching summer school, she guided a student to go from a 13 on his Regence, to a 76!  The other teachers told her she was an over achiever because kids only need a 55 to pass.  Can’t argue with that. J

We named our team at Trivia, “Beat Me in St. Louis.”  Only the MC was amused.  I had spent the week reading every single article and video on Robin Williams, which is why I was super disappointed when one of the categories was “name every RW movie you can think of” and we only though of 17.  Still it was a record high score of 22.5!

Lucas’ friends had one last show on Friday.  Because of the amount of bands that his BFF Arda was in, they called they show, “Arda Fest.” Here’s a picture of the flyer, and why yes.  That is Arda’s head on artichokes. 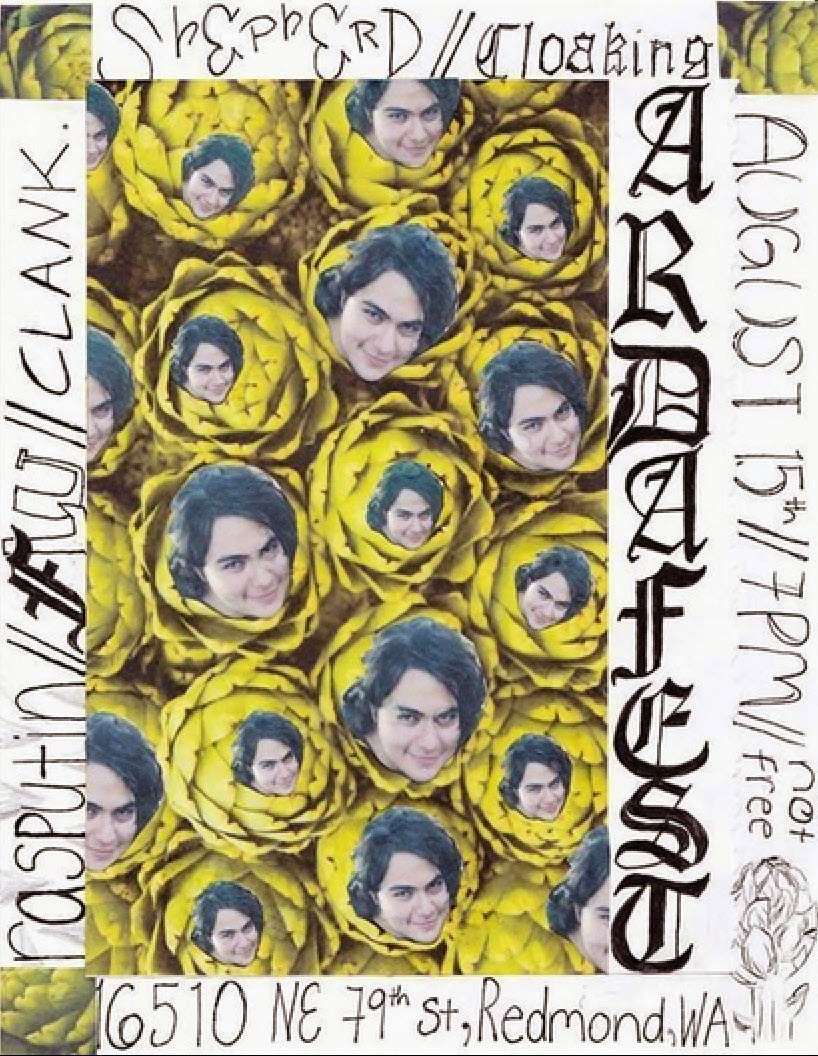 The moment that we’ve all been waiting for.  Scratch that, the moment that Lucas has been waiting for all summer long, the DECOLONIZER arrived!  I don’t know if you can tell here, but it’s almost 4 ft tall and 3 feet wide.   Which of course he brought to school with him.  He thought about taking just the cab, to save space. 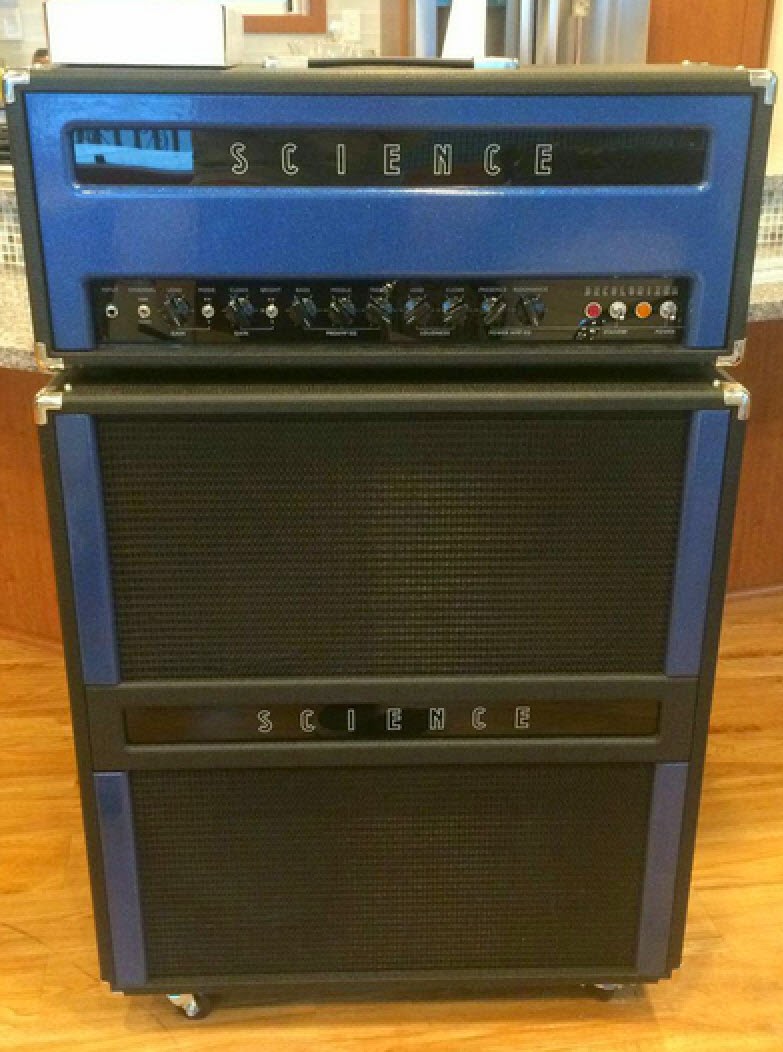 “Luckily,” the decolonizer fit into the car, and the records (still no way to play them), skateboard, and I *think* he brought a guitar, but honestly, I didn’t have a visual of it.  When I handed him a Tiffany & Co. bag filled with quarters he said, “FOR PINBALL!” Or laundry, b/c he only brought 4 pairs of socks.  I guess he had to make room for that amp. 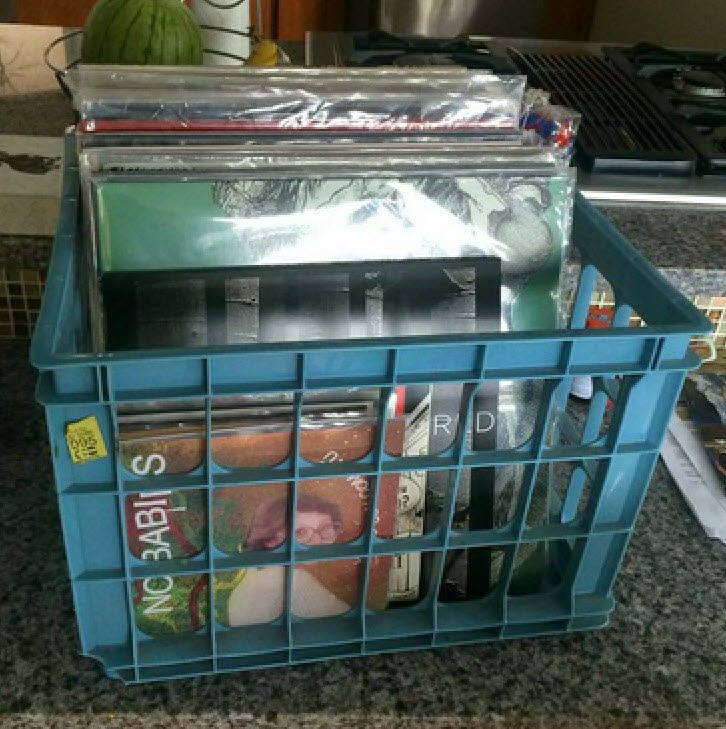 Honestly, it was a bit of a whirlwind week (and summer for that matter.)  Mariana took vacation, and spent most of it helping Lucas clean up his room, pack and get last minute stuff done.  D&J were in indy for Gen Con (I hear Jordan and Raymond had really great shows.)  Dawne came back early on Friday night at Midnight, which was about the same time that Lucas walked in from the show.  Then, we all got up early so that Lucas could run over for the second part of his TB shot, a friend stopped by to say adios, and they ran off to Bella’s Bat Mitzvah.  I went to the park with Kelly, and made a reservation for D&L at the beginning of the redwoods.  I also made 4 dozen cookies for the road, and put together a little road trip bag.  Before I knew it, the car was packed they were gone.  I was sadder than I thought I would be, not gonna lie to you.   As I was straightening up the house, I did notice that Lucas had left me something from Monday’s party – proof we should never order salad. 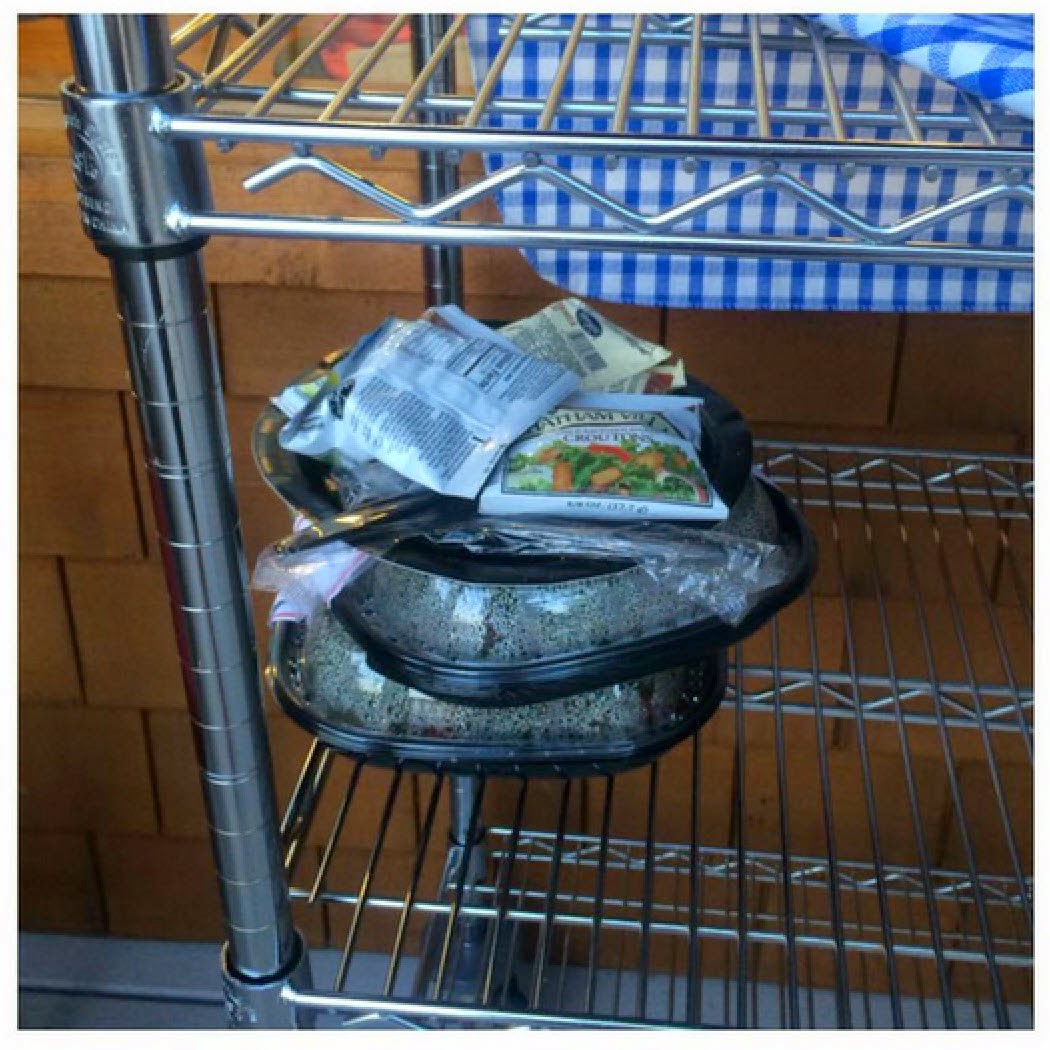 Kelly came over that night so she could watch HP for the first time.  She also showed me how well Piper does “place.”  Really impressive.  I’ve been trying to have Percy do it too, but I don’t have the same kind of patience that Kelly does.  After about 3 minutes, I’m all, “Break! I want to play with you now.”

Then the pups let me sleep in, and can’t remember how the rest of the weekend ended! I do know that Casper and Nala know how to keep their distance while still being curious as to what Percy is up to. 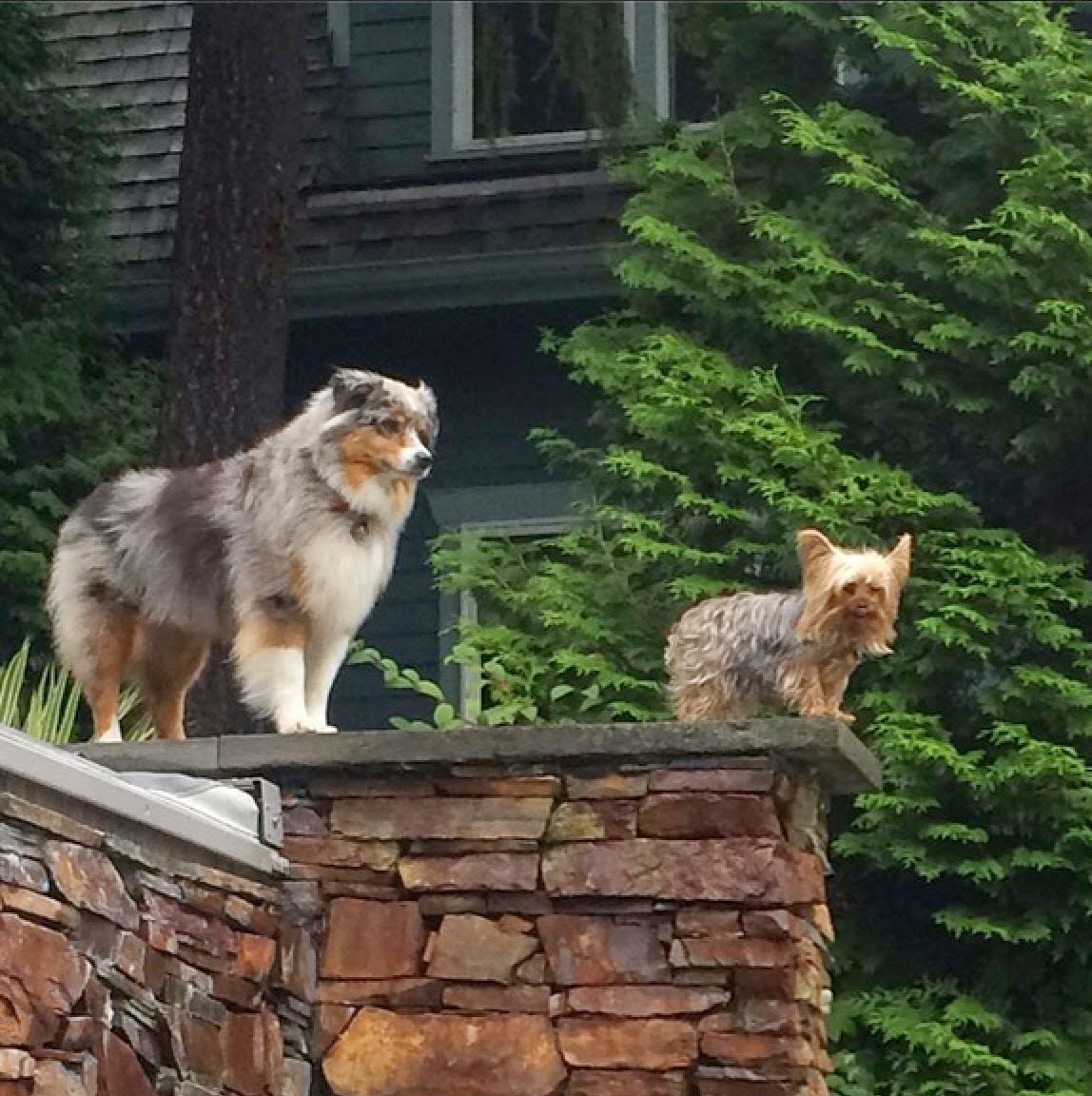 And then they take a 360 approach to their lookout. 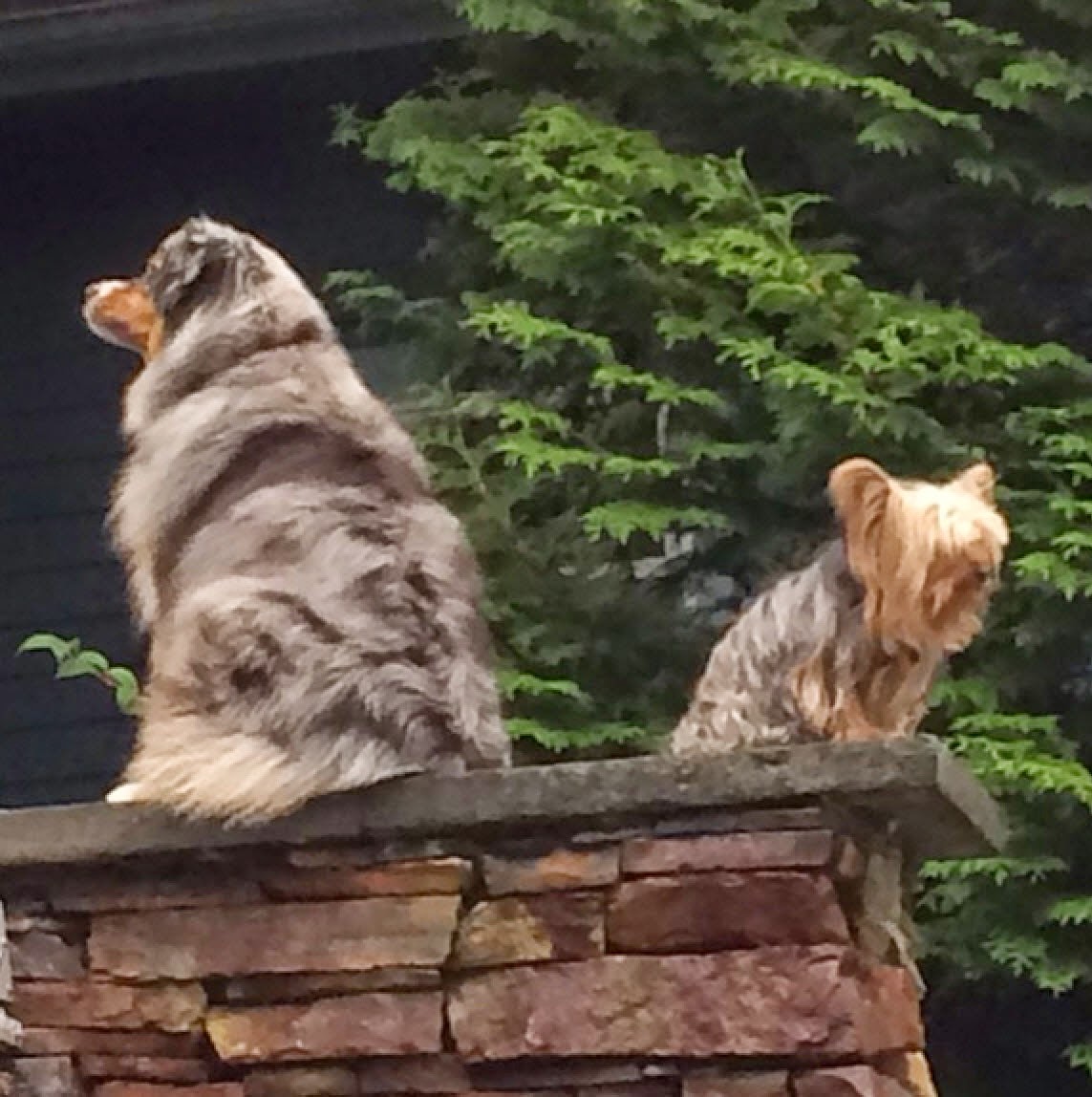 Although sometimes, Casper is still sleepy in the morning.  Don’t we all wish we should sleep sitting up. 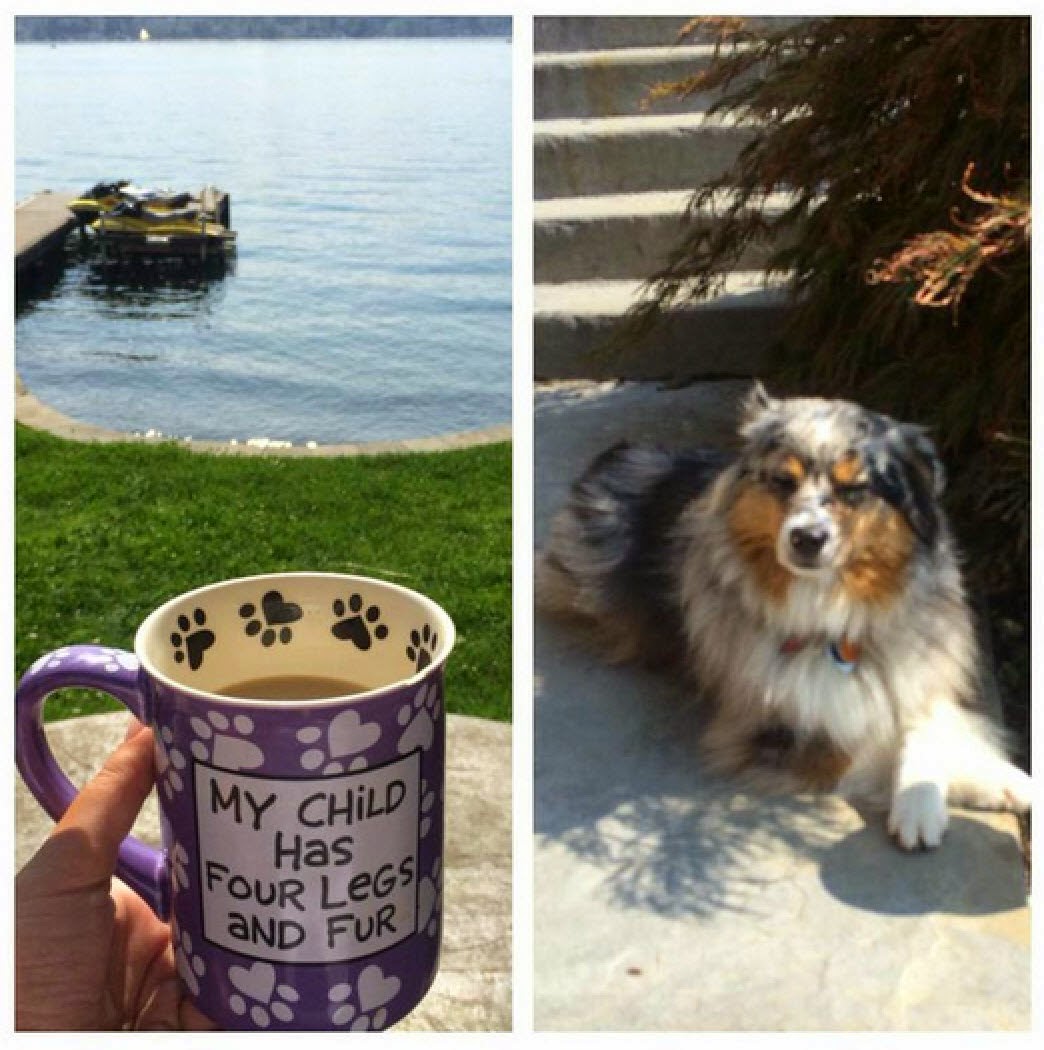 Posted by skcorynaffit at 7:33 PM