Power and money - my favorite things!

I'm sure you are shocked to hear that I am, for the umpteenth time, re-watching Friends.  At one point, Janice on Friends said, "Aren't you a puppy!" to Chandler and Percy just woke up and started looking around like someone was talking to him.

I'm not entirely sure that Percy is liking doggie day care, in that he shakes and pants on his way to day care, and then, every day he spent much of his day on a book shelf.  Here is photo proof of his secured location: 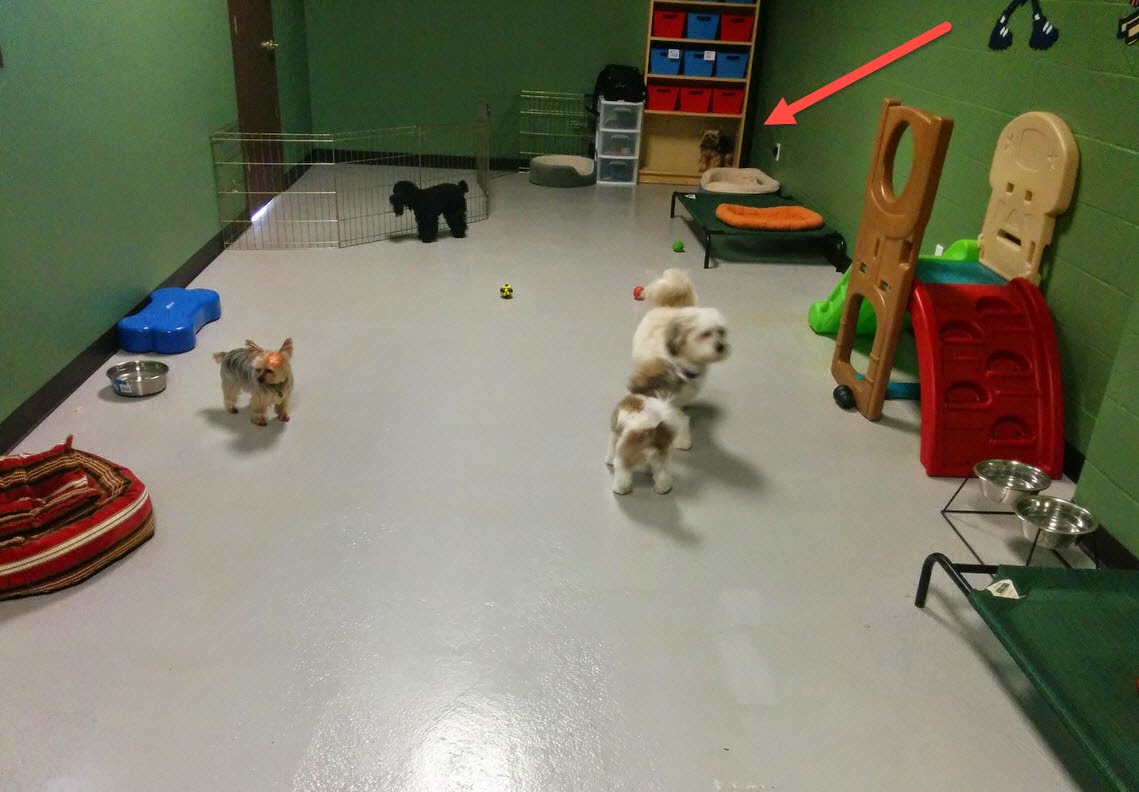 I can't remember if I told you this or not, so now is as good a time as any to say it again.  When I got back from my trip, there was a card waiting for me from Becky.  Not a Christmas card mind you, but a Valentine's Day card from last year. 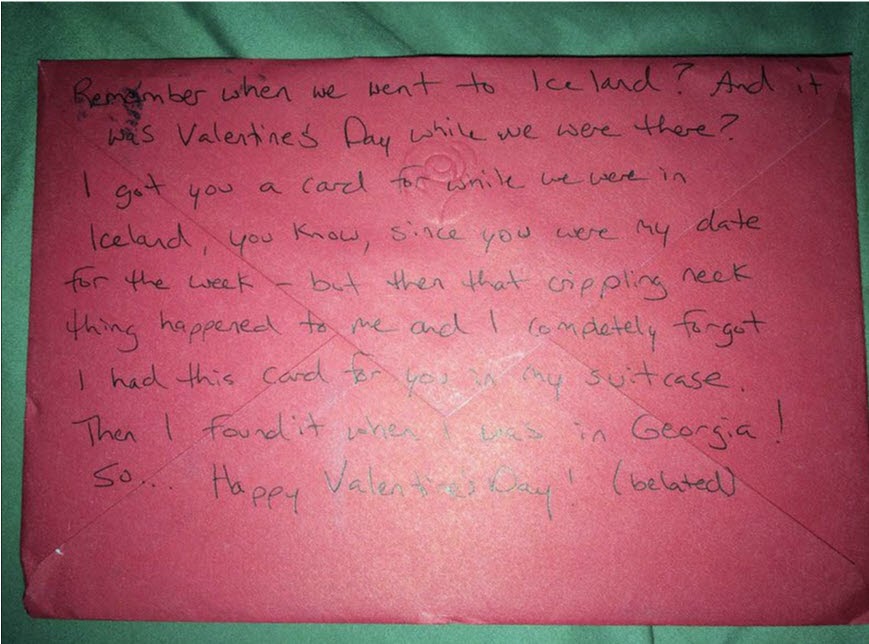 In a delayed resolution-like style, Corrinne and I started walking at lunch.  We did this a couple of times, and we found a pretty cool railroad turned trail to do said walking on.  I didn't want to tell her, but my foot hurt a bit from not wearing proper shoes, and the fact that she pushes me to walk WAY faster than Kelly does.  Now that I know this, I've just left the proper shoes in my car so I'm ready to go at any time, but I can still wear the kool kix my brother got me for Christmas.

I know that for the next couple of updates, my stories will be sparse.  Just imagine, every day, me coming home, opening my computer to finish a Monday email, getting distracted by Friends, and feeling like a failure, and you'll be caught right up.  The one weekend that I did get a bunch of emails out (and by a bunch I mean two), Elizabeth sat with me and every once in a while she'd say, what number is that? (I had told her I was 5 weeks behind.) Still #2 Elizabeth!

Over the weekend I met up with Kelly, Hannah and their parents at the dog park.  As I was walking from my car, Kelly handed me a bag with an extra battery charger and the cash I had forced her to take before I left her in Thailand. To which I said, "Nice. Power and money - my favorite things!" Unfortunately, Elizabeth was super sick all weekend, and I felt awful that I couldn't do anything to help.  I was also just as certain that I was going to get whatever she had, given that we were sharing a bathroom, which is why I was very excited when I didn't. (Although, a couple of days off of work wouldn't have been frowned upon.) 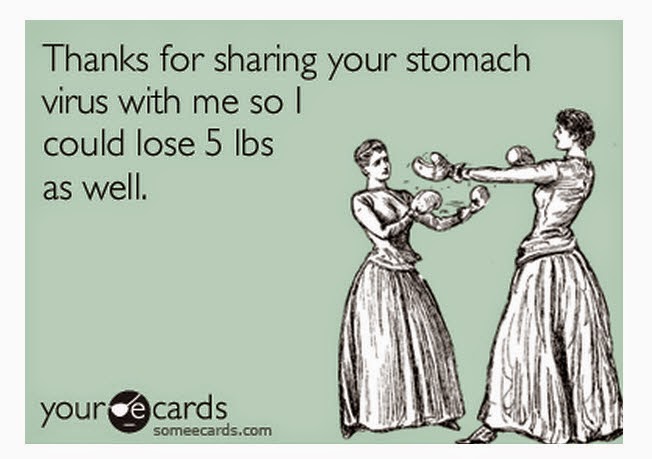 Which brings us to the Super bowl! Doctor Rach and Anders hosted, making some amazing ribs by the way.  Seahawks scored the first time I went into the kitchen, and scored again when Dr. Rach went into the kitchen, so obviously that meant that someone had to be in the kitchen at all times.  By the end of the game, when things were getting dicey, I jumped up and ran to the kitchen - helping any way that I could - but I think it was already too late.

After the Turbo Tax commercial that took place during the Boston Tea Party.
Hays to his children: That was actual footage.

June: Hey Shana, what are you doing?
Shana: Cleaning your orange (like you asked me to).

Jen: Where has Missy Elliott been?
Shana: Losing weight and slowly gaining it back.
Jen: Ah yes, and I see oversized clothing really does equal hip-hop.

I brought the Oreo's from Thailand that had a "serving size" of 4 all wrapped up.
Hays: This isn't what Jen thinks is a serving size.
Jen: A serving size is one row, three servings per package.
Hays: Our biggest argument has been over double stuff.
Jen: I wouldn't call it out biggest argument. 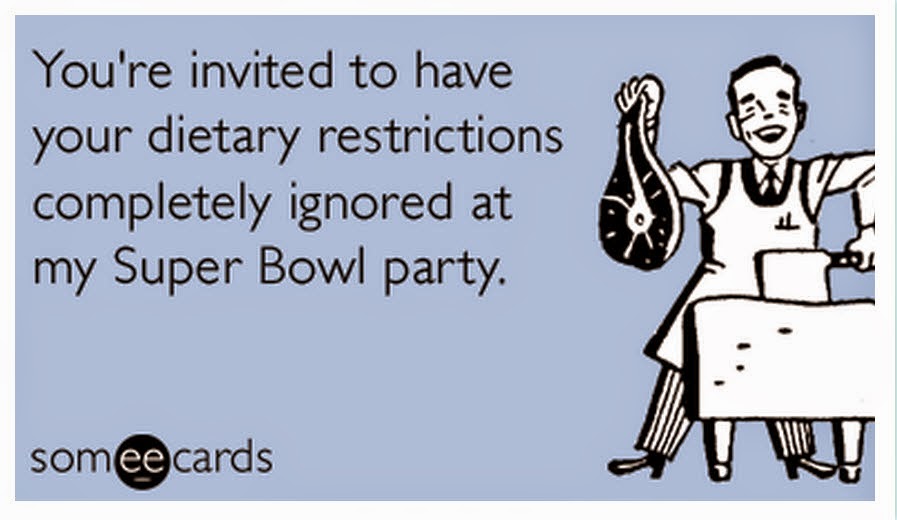 On Katy Perry and the number of prosthetic commercials.
Jen: She really trusts that rig.
Me: Wouldn't it be sad if she fell and needed new legs?
Shana: So hot right now.

Jen: Rachel can I use your bathroom or do I have to outside?

Jen: There are brownies over there.
Dr. Rach (looking very disappointed): Paleo brownies.
Jen: Also the makings of the ice cream float...
Dr. Rach: Are also paleo? Get out of my house!
Jen: ... Are in the kitchen

Shana knows how to bring ice cream floats to the next level.  She not only brought the best of the best ice cream, root beer and cream soda, she also brought makers to pour on top.  She is not kidding around (nor was she crazy enough to bring paleo ice cream floats - which was lucky for all involved.

Nater just walked upstairs and looked at me with disdain that I was still talking about the super bowl - so I better get cracking on the next Monday email!

Posted by skcorynaffit at 11:07 AM