This was a pretty big week for my friends.  Janette's baby Azalea arrived on Sunday 4/12 and Christy's baby Amelia arrived on April 14th.  I can't think of any better way to kick off this update than with adorable baby pics. 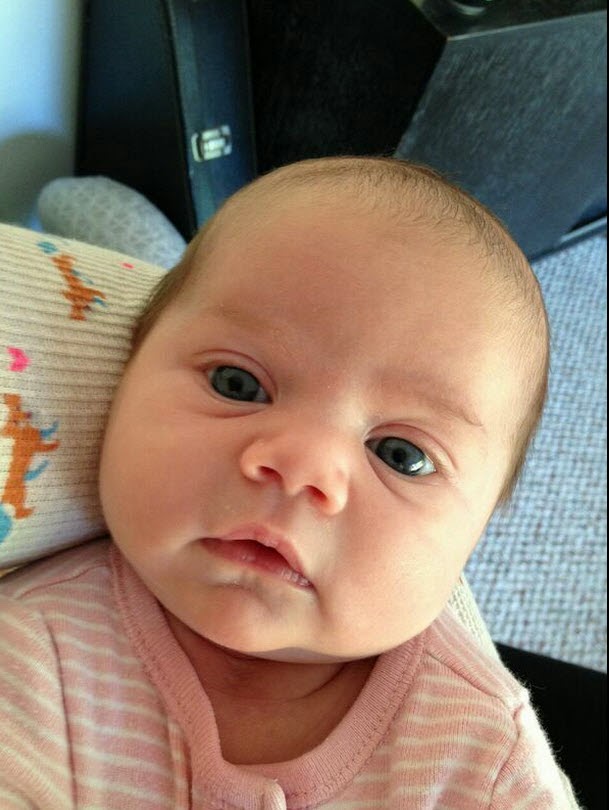 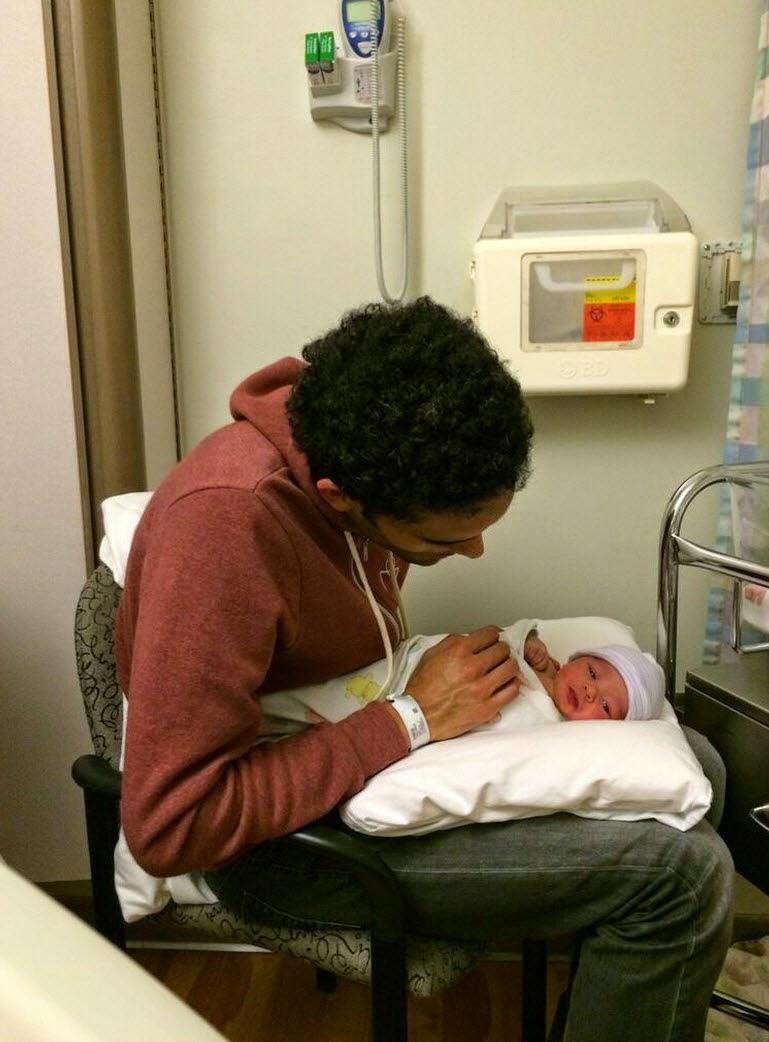 Ryan and I discovered an injured duck at lunch.  The first day we gave him half our lunches, and then left a stash of additional food for later.  The next day, we tried to find him again and got a little sad when we didn't see him.  That was under we saw him swimming.  We once again over fed him.  After the weekend, we worried very seriously that something had happened because he was gone.  Tuesday, I grabbed lunch with Tony at Deru followed by a stroll by the lake.  That's when I saw a huge pack of ducks and there he was, our lame duck.  Not so lame any more though, b/c he was totally able to fly.

Tony: I had a couple of gay ducks that used to hang out by my house.  Seriously, they were two boy ducks that were inseparable.  At first I was like, "that is so cool that there are gay ducks!" and then I was like, "Ugh, I can't believe even gay ducks can find mates and I'm still single!" 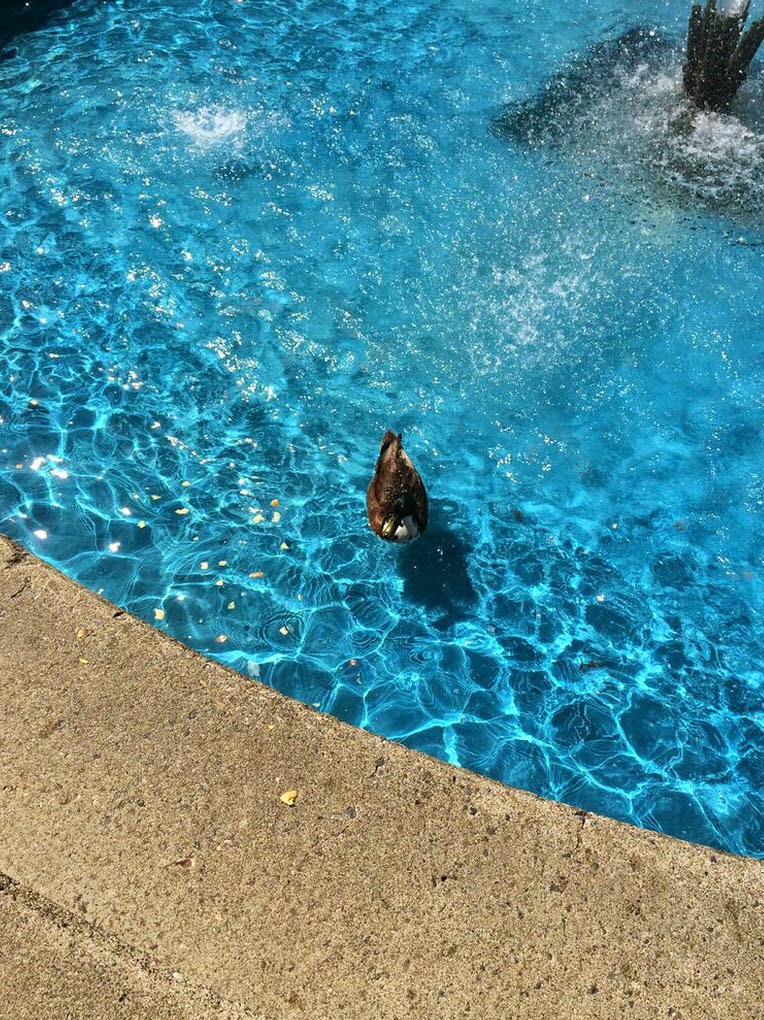 Dawne & Jordan are traveling again.  I hung out with Casper for the first weekend because Zach was going to a convention down in Portland, and then Zach was going to hang out with him for a week.  Dawne packed individual containers of food for each day because Zach said he was only going to give him dry food because it was easier.   Dawne felt compelled to tell Zach how important it was that he feed her dog.  That it was one thing to kill her fish because of lack of food, but quite another to starve her dog to death.  Zach didn't think this was very fair, but appreciated the containers of food.

On Friday, I came over to Zach's and we went for a nice walk with the pups, picked up some teriyaki and then watched the Hobbit.  We were going to catch me up on Game of Thrones, but since the recent move, Comcast wasn't working properly.  Now, if that had happened to me, I would have waited two weeks before calling to fix it (b/c I would have waited until it was during work hours and then work would have happened and I would have completely forgotten... okay maybe it would have taken more than two weeks.)  Tristan came home and immediately got on the phone.  He had it on speaker, and do you know for the hour that he was on the phone, he was ridiculously pleasant.  I mean, super sweet and funny, and not at all frustrated.  Even when they said that they couldn't fix it and would have to call him back the next day, he gave the lady his number and said, "Put it on speed dial!"  Have you ever heard of such a thing?  A-MAZE-ING!

Super disappointed that I have no idea what this note is about, "Hunting candy, Bambi" Especially because I don't know if Tristan said it or if it was said at the baby shower.  Doh.

Saturday I did a lot of errands that I just didn't get done the weekend before because was sick.  Kelly and I decided to meet for a walk, only I decided I had time to make Mac and Cheese and bake a cake before I met her, which I didn't, so she had to come to the house and wait for the cake to finish cooking.  Then we went to the park, followed by her coming back to the house to watch me fail miserably at making a cake.  It should be noted that I used 4 boxes of brownie mix (I thought it would be a good base) and 8 boxes of cake mix (the first batch was a failure because I forgot eggs.) Because I was in a rush to go to the park, I didn't really let the cake cook all the way, combine that with the fact that the brownie was WAY too heavy for a layer cake and the fact that it didn't really come out of the tin well because I didn't bother to grease the pan, well... we were not off to a good start.  I told Kelly not to worry because I would just cover it all with icing.

Kelly: Didn't you try to do that with that cake competition?
Me: Um, yeah, but that was different because we also using cool whip and pudding. And I covered that with a garbage bag which is not an option here. 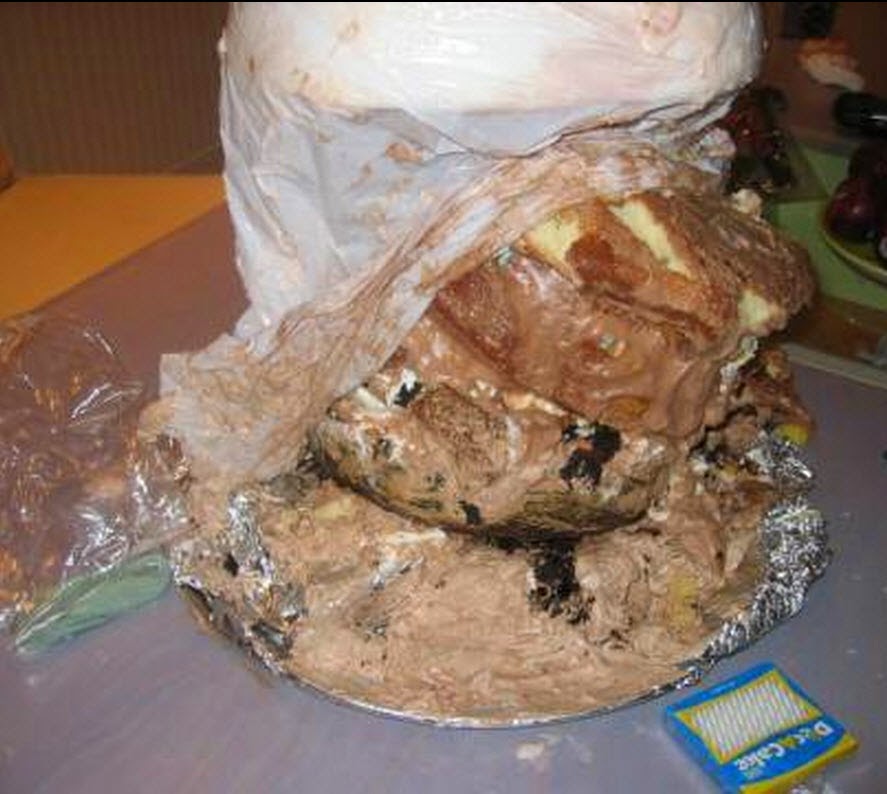 Kelly: Okay.  Isn't the cake important at these things? I mean people take pictures.
Me: It'll be great! (Putting on the 4th tub of icing).
Kelly: You know you could just bring it work and ppl will eat it there.

Turns out, I was too embarrassed to bring it to work.  Instead, I thought I could salvage it by taking the second layer off.  Unclear why I did it with my hands, though.  Found out through this process how under cooked it all was and blamed the lack of structural integrity on that.  That's when I texted a picture to Laina and she offered to buy the cake which saved me the soul crushing task of buying a cake that I could have picked up hours and 12 boxes of mix ago. 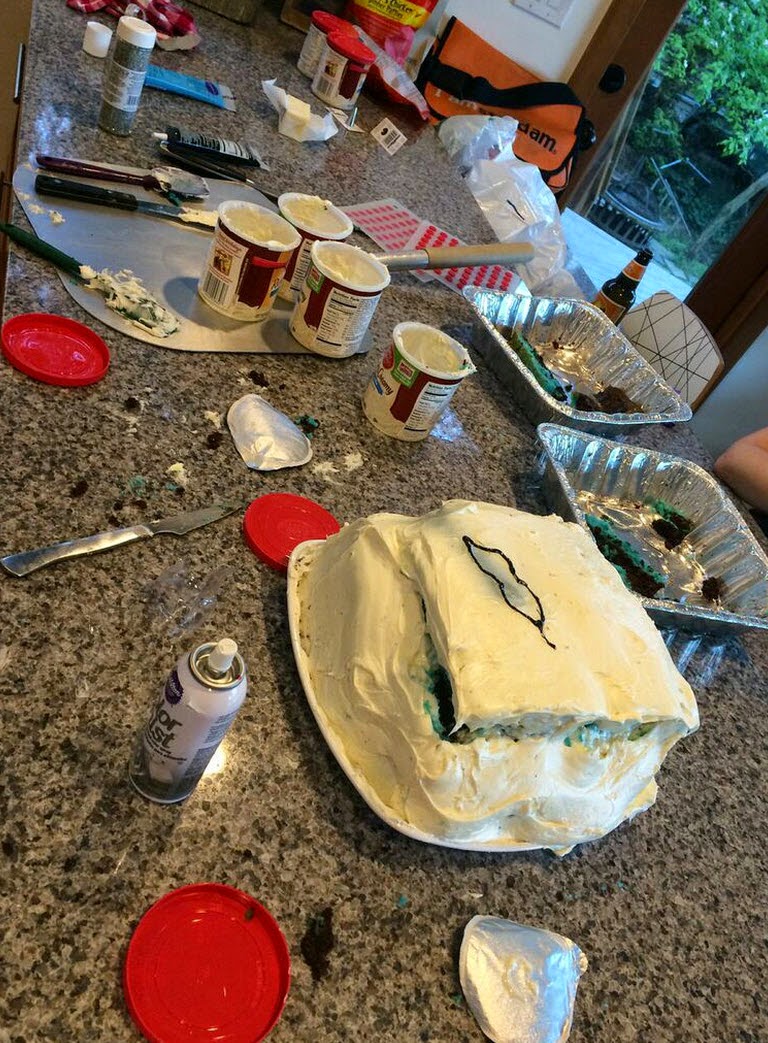 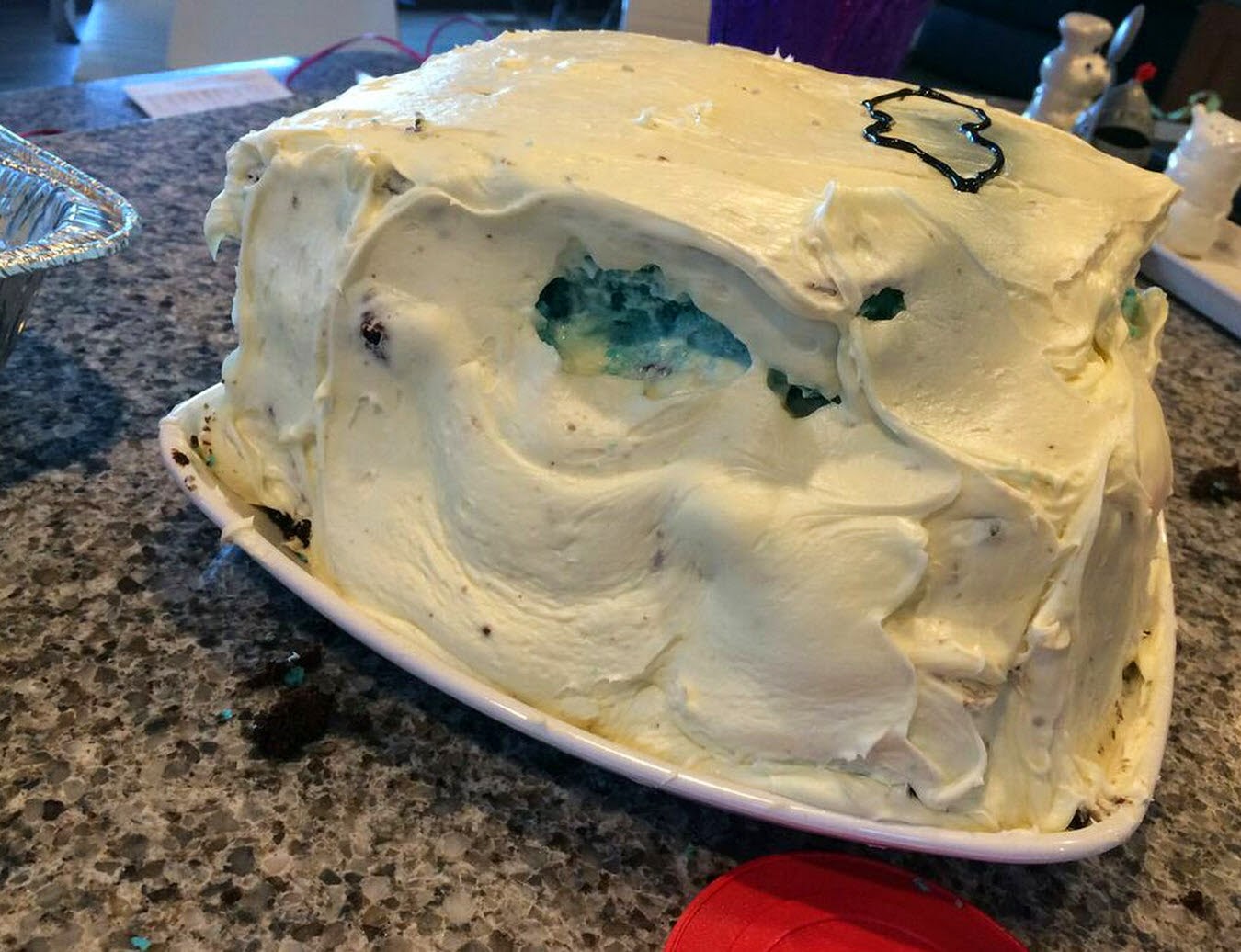 The next day was Dr. Rach's baby shower.  I co-hosted with her friend Lauren.  I had really wanted to make it a "How to raise a boy in the Pacific Northwest" theme.  Lauren really wanted a "Grey and White" theme.  Lauren won because I was trying to be on my best behavior.  I couldn't resist getting a few helpful books and including a suggestion box for PNW parents.  I also got them a flannel shirt and skinny jeans, socks with sandals, moustache pacifier (the third that they received), hiking shorts and a onesie that said, "I'm told that I like hiking."  Here are the books and the fancy store bought cakes from Laina and Mo: 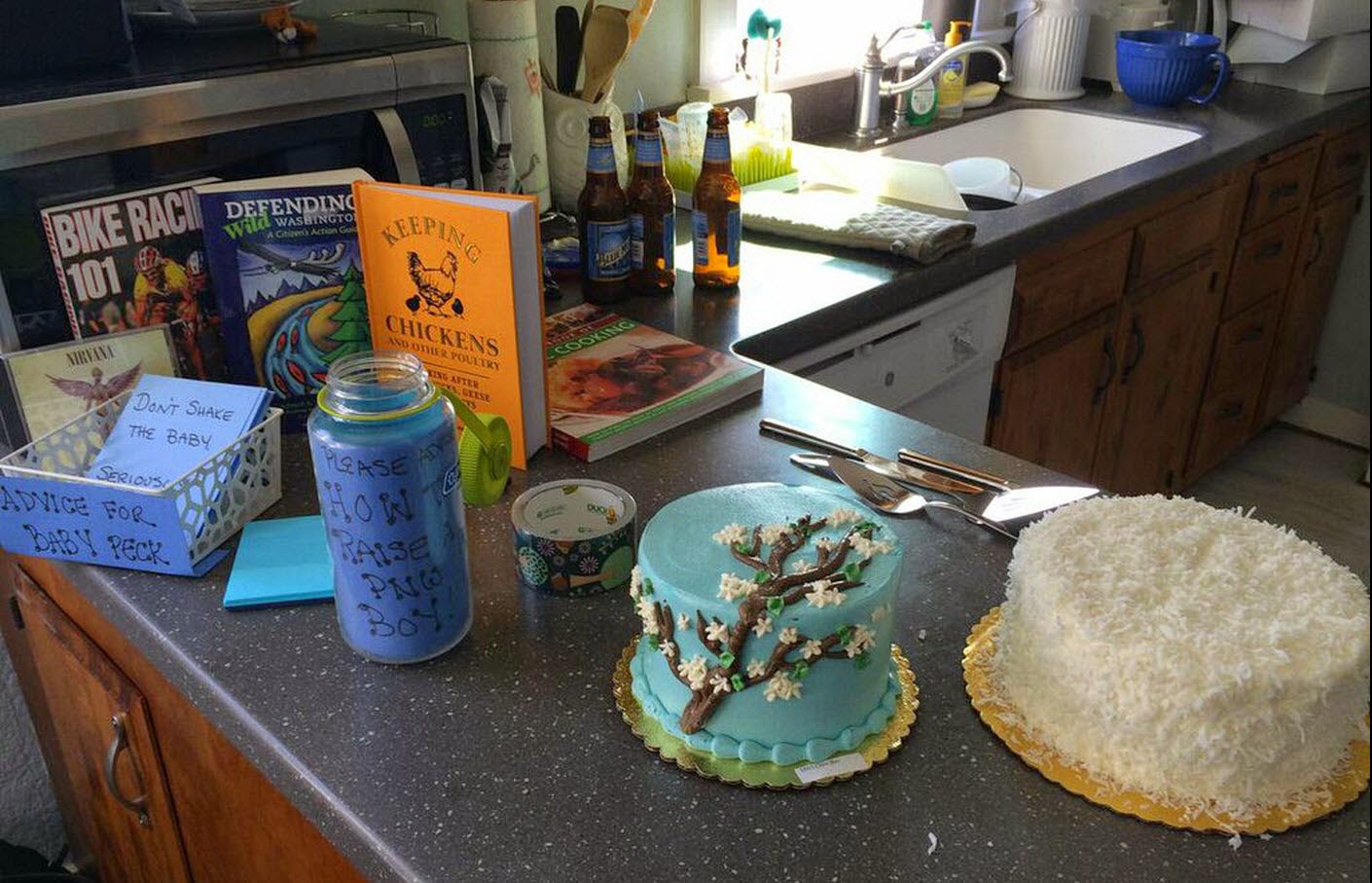 It was a gorgeous day so we opened presents outside.  Shana's gift predicted that their child would be a "Lottery Winner."  That's legit, lots of doctors win the lottery. 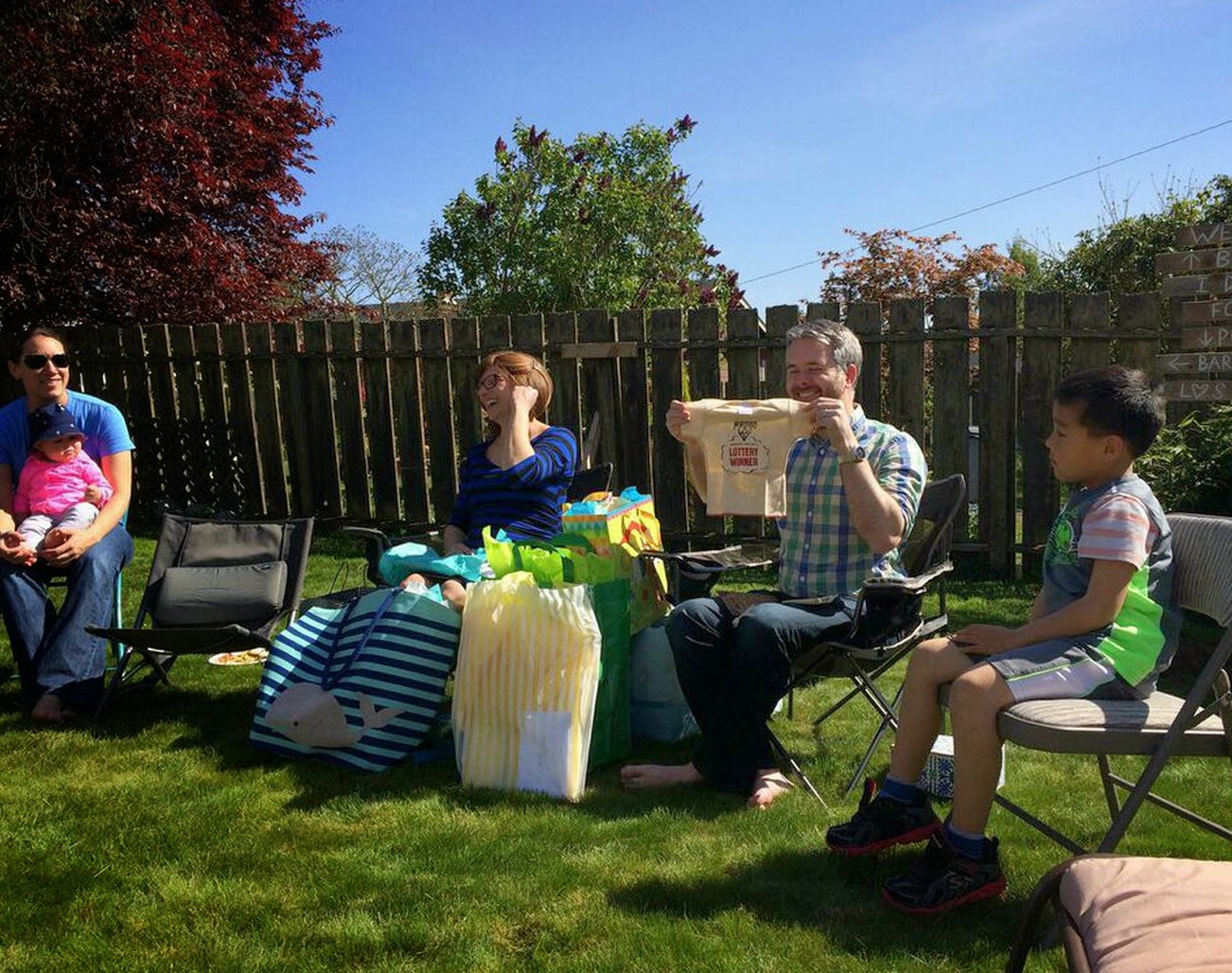 Jin (to her complaining child): Can you just figure it out yourself?

We decorated blocks, trying to get through the alphabet.
Shana: I like that you and I both wrote our names as things that begin with our letters.
Me: So did Laina!  This must be why we're friends.
(Mine also had a self-portrait even though Mo didn't think the portrayal was accurate what with my black arms and red hair. A girl can dream can't she?) 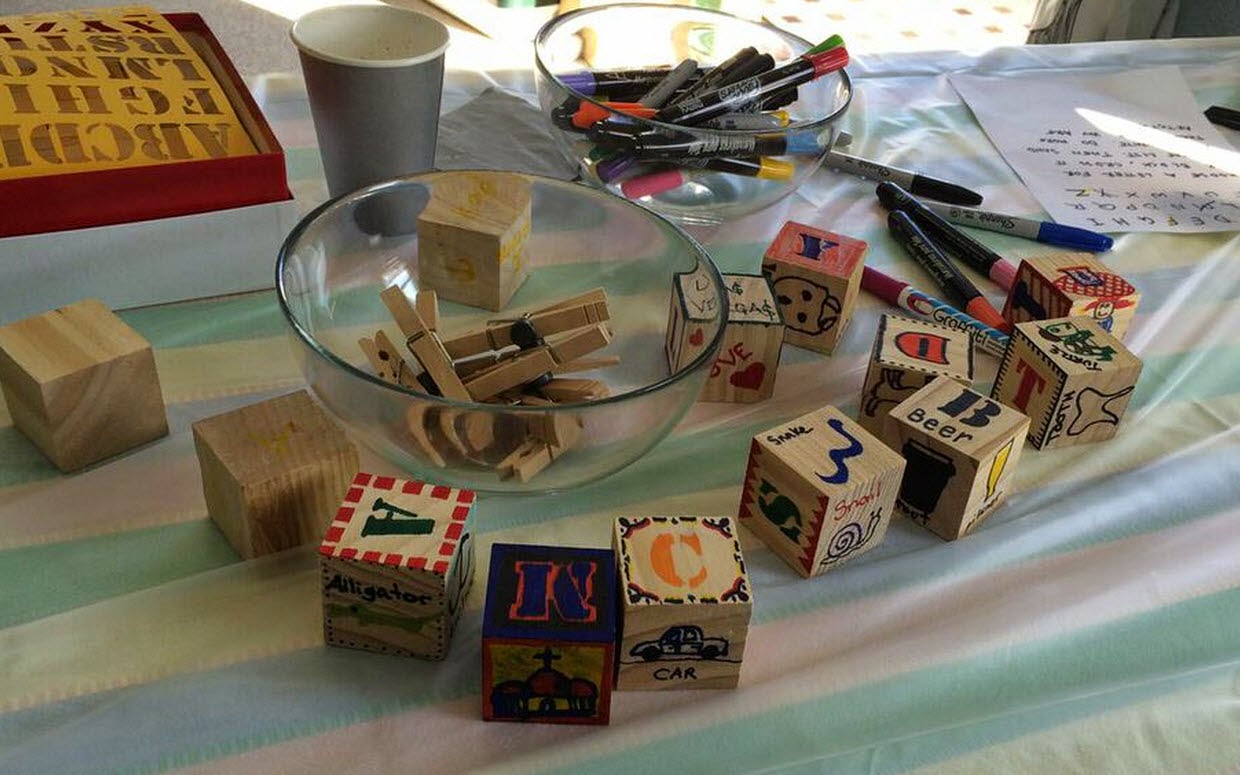 I think I might have mentioned earlier that it was suggested that they name their child Abcde (even if it is clearly a girl's name), so I decided to make them a onesie with his name on it. 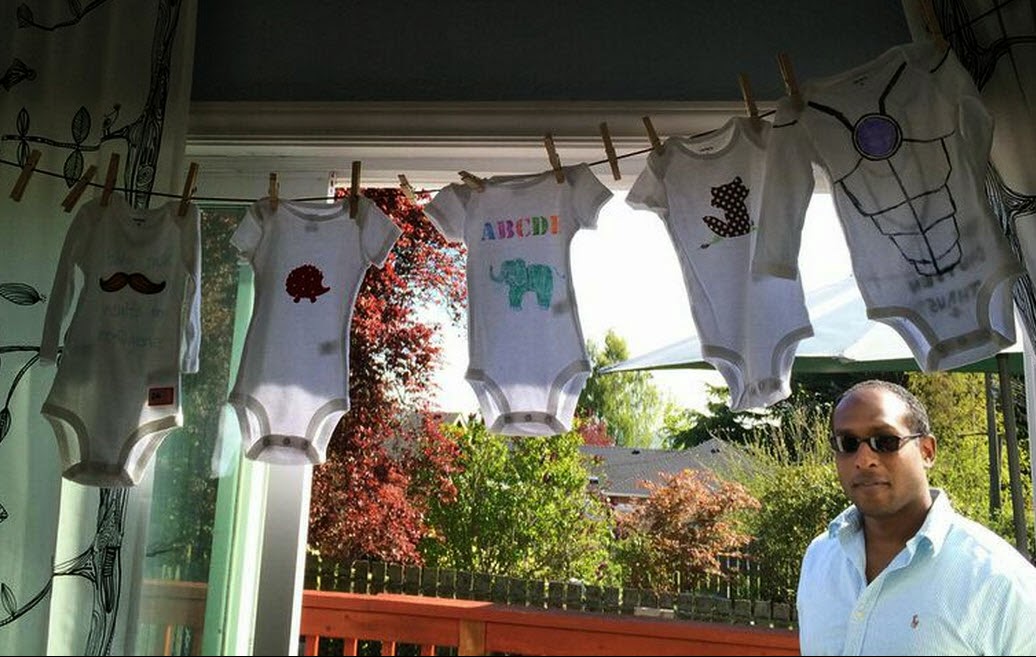 Posted by skcorynaffit at 8:50 PM