On Monday, it rained while I was watching TV and when I looked outside I saw a beautiful rainbow.  Alas, I was too lazy to get up and take a good shot of the rainbow with the lake and mountains, so I just took this for you. 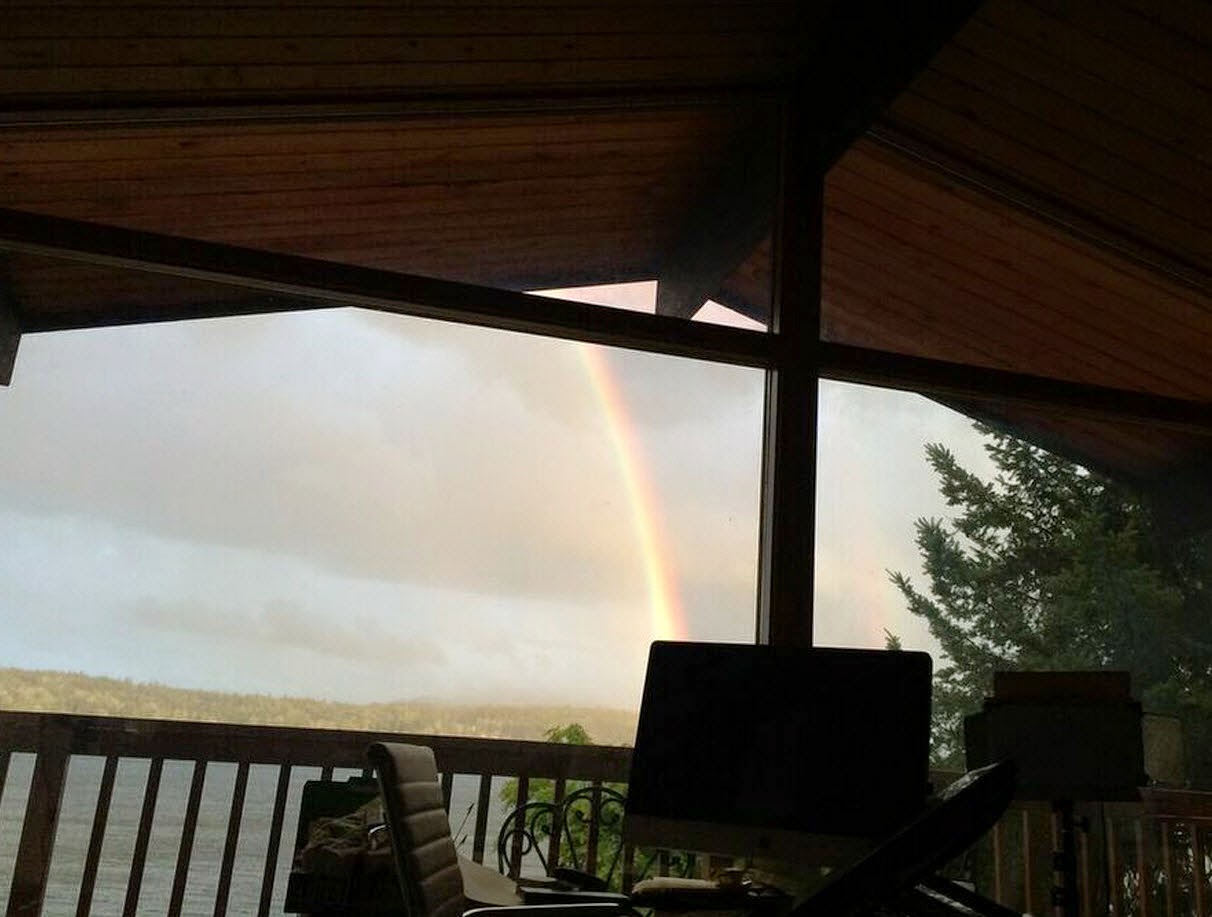 I celebrated Earth Day by driving 3 blocks to Homegrown with Ryan for lunch.  J 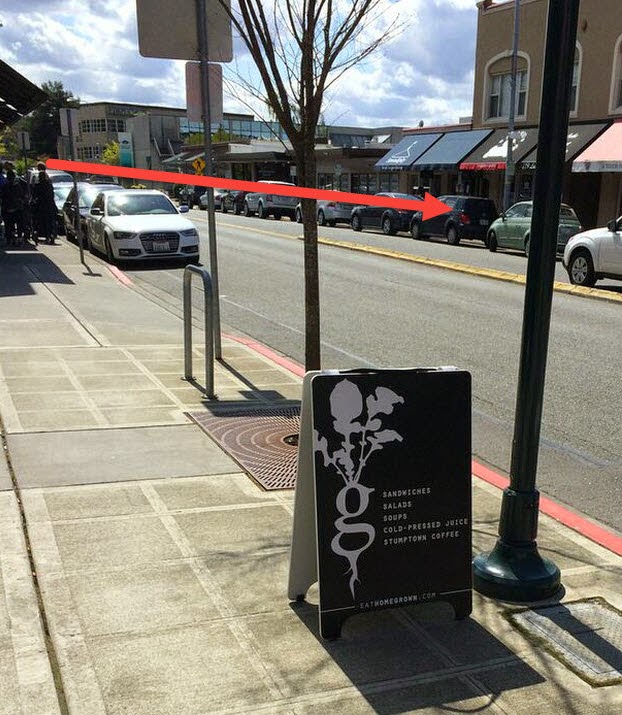 Tuesday evening, I was hanging out, watching the Gilmore Girls for the umpteenth time, not writing my Monday email, when Kelly texted me to meet her at Trader Joes & QFC for some late night shopping.   So, I put some pants on and shoved Percy in a bag and drove over to Redmond.  Very early in our relationship, Kelly found out that I didn't like tomatoes.  She was highly offended and told me that her grandma called them "Gifts from God's Garden" and then threatened to end the friendship right then and there.  I'm not entirely sure what changed her mind, but here we are.  I mention this, because she put tomatoes into the shared cart and looked at me as if I might be repulsed by the fruit-that-disguises-itself-as-a-vegetable was so close to my bananas.  I wasn't, of course.  As long as they aren't too close to my mouth, raw tomatoes and I can get along just fine.  On our way out, I was chatting up the chick who was checking us out.  I mentioned that I wanted go to a blow dry bar, and from there, all of a sudden, Kelly was my "High Maintenance Friend" (which I found hilarious because of how far from the truth it is.)  But then, Kelly brought up our "friends" that we made while waiting for Dollar-Rent-a-Car, and I started wondering if I talk to strangers too much.  Nah.

On Wednesday, Percy got his summer cut.  He had some matting so Tess had to cut way more than I would have liked, and he ended up looking, well, naked.  I felt really bad for the skinny, furless pup.  I even dropped him off at daycare with a, "will you still love him, even though he's ugly now?" She said she would, so I guess I should also.  (I'm just kidding, people.  I still love him, and I totally know that in time I'll love him more b/c it will grow back. :P) 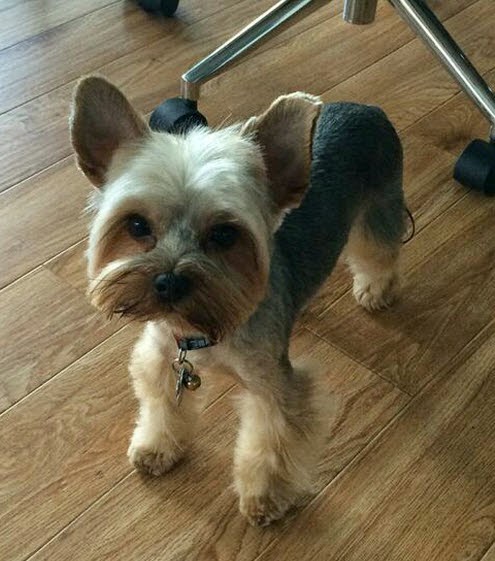 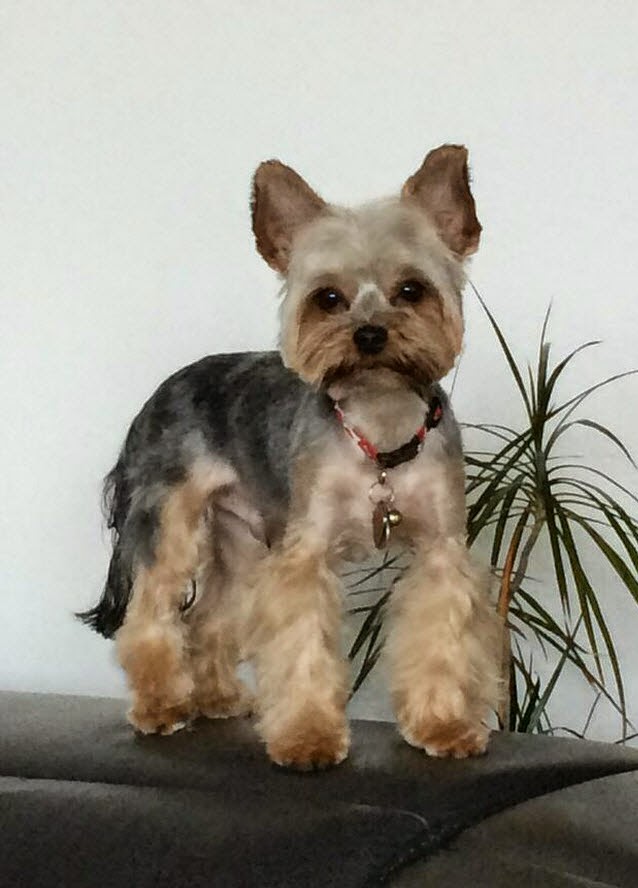 I'm going to skip right to Friday when I started a road trip by flying down to LAX.  Mucas Lucas picked Percy and I up and we headed to the Four Points Sheraton.  Lucas: I told my dad we were staying at the Four Seasons.  This makes more sense.

We got to the room and then listened to Arda's band perform via a web radio.  For a while though, we were just listening to people chat, which felt very creeper like because it also felt like we might be the only ones listening in from afar.  Percy was not used to all of the in and out of our guests and I felt like I was up hourly to let him know that it was okay that we were surrounded my awake strangers so close to us.

Luke's care was packed with all of his worldly possessions, like his guitar which Percy proceeded to play.  I guess he got a little bored in the back.  We drove from LA to Pleasanton (outside of San Fran) to see Erika and Kenny.  Even at 7 am in LA on a Saturday, we managed to run into traffic. 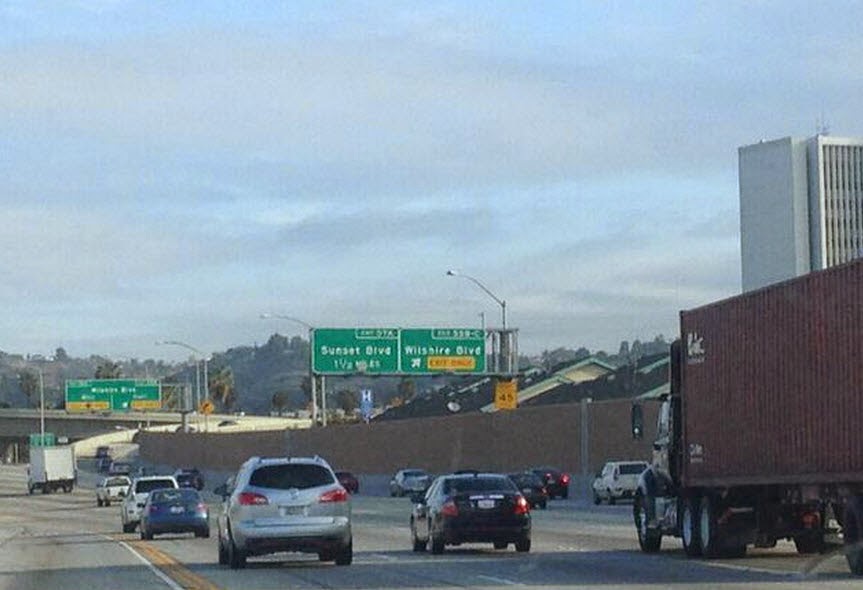 After filling tires, gas tank, and the car with snacks and caffeine, our next order of business was to take the "Do you know what boats are?" survey which I was laughing so hard I'm surprised I was able to still drive safely.  Please oh, please, check it out:

I got "You kind of know what boats are." Meaning I could kind of get through a conversation about boats, and if I ever saw one I would probably say, "Yes, that's boats" but then I'd have to look up more info to finish the conversation.  Later, I would see a boat on a trailer.

Me: Lucas, what is that?
Lucas: Oh that? That's Boats!

And at Erika's, after using the boys bathroom with frogs in an aquarium.
Me: Lucas, could you go into the bathroom and let me know if that's boats?
Lucas (returning): Yeah.  That's boats.

As soon as we got to Erika’s I requested a walk so that Percy (and frankly I) could stretch my legs a bit.  Xavi found a snail while we were walking and both he and Toby were telling Lucas about the snail’s 4 eyes.  Lucas kept trying, every so politely, to explain that he didn’t think that they were all eyes, but the boys were not overly receptive to this.   When we returned, we discussed a plan of action that included getting some burritos and going to a record store.    The first part of the plan was to take the BART.

Me: I love how easy it was for us to plan this.
Erika: Yeah, Kenny did all the work.
Me: And I just let us take the credit!

Lucas: Look at how colorful that is.  Doesn't that look fun? 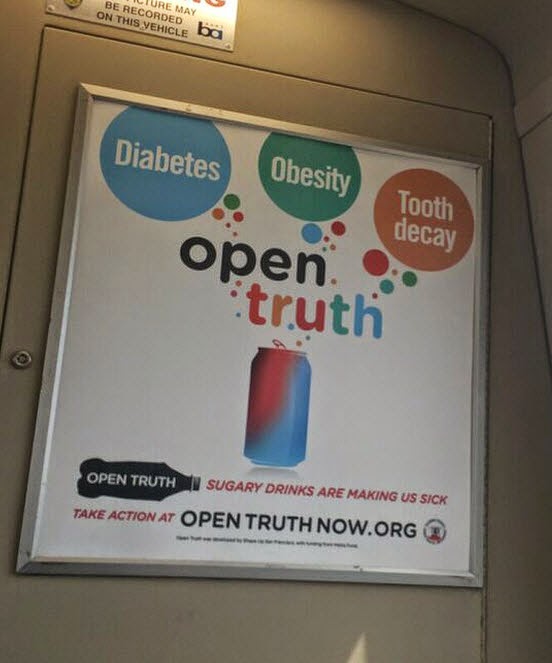 We got to the burrito place (pretty sure the best burrito I’ve ever had btw), and Lucas and I both ordered a strawberry drink, only he got Ice and I didn’t.

Lucas: I could let you use some of my ice after it melts a bit.
Me: No one has ever offered to share their ice with me.  That is so sweet of you, Lucas.

Passing by the Social Security building
Lucas: Oh! Now that’s something I’d love to have.  Do they sell it there or how does it work?
Me: Yes, it’s a great group. I’m a card carrying member in fact.
Lucas: Really? Has it helped you to be more socially secure?
Me: Most definitely, even in the most stressful of conditions.  Erika, we’re making psych jokes back here, why aren’t you jumping in, I’d think this would be right up your alley.
Erika: I can’t joke about that, it’s too close to home.

Then Lucas went to the record store and Erika took me to a place that had a lot of stuffed dead things, bones, eye balls cut in half (and if they are indeed the gateway to the soul, that makes me very uncomfortable) and a couple of hearts and brains.  Toby was super excited and wanted to show me EVERYTHING.  What fun!    Then we went to the park. 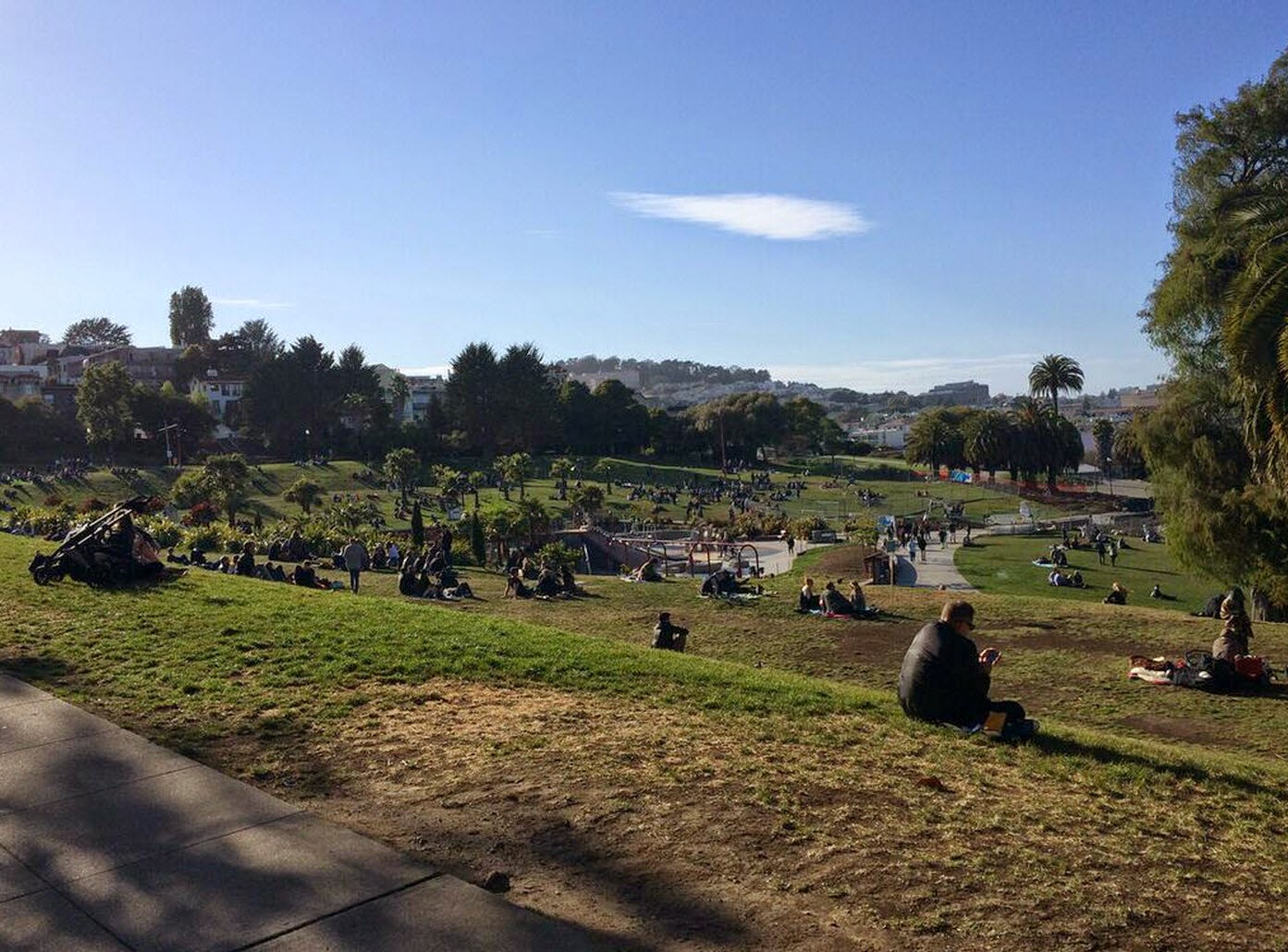 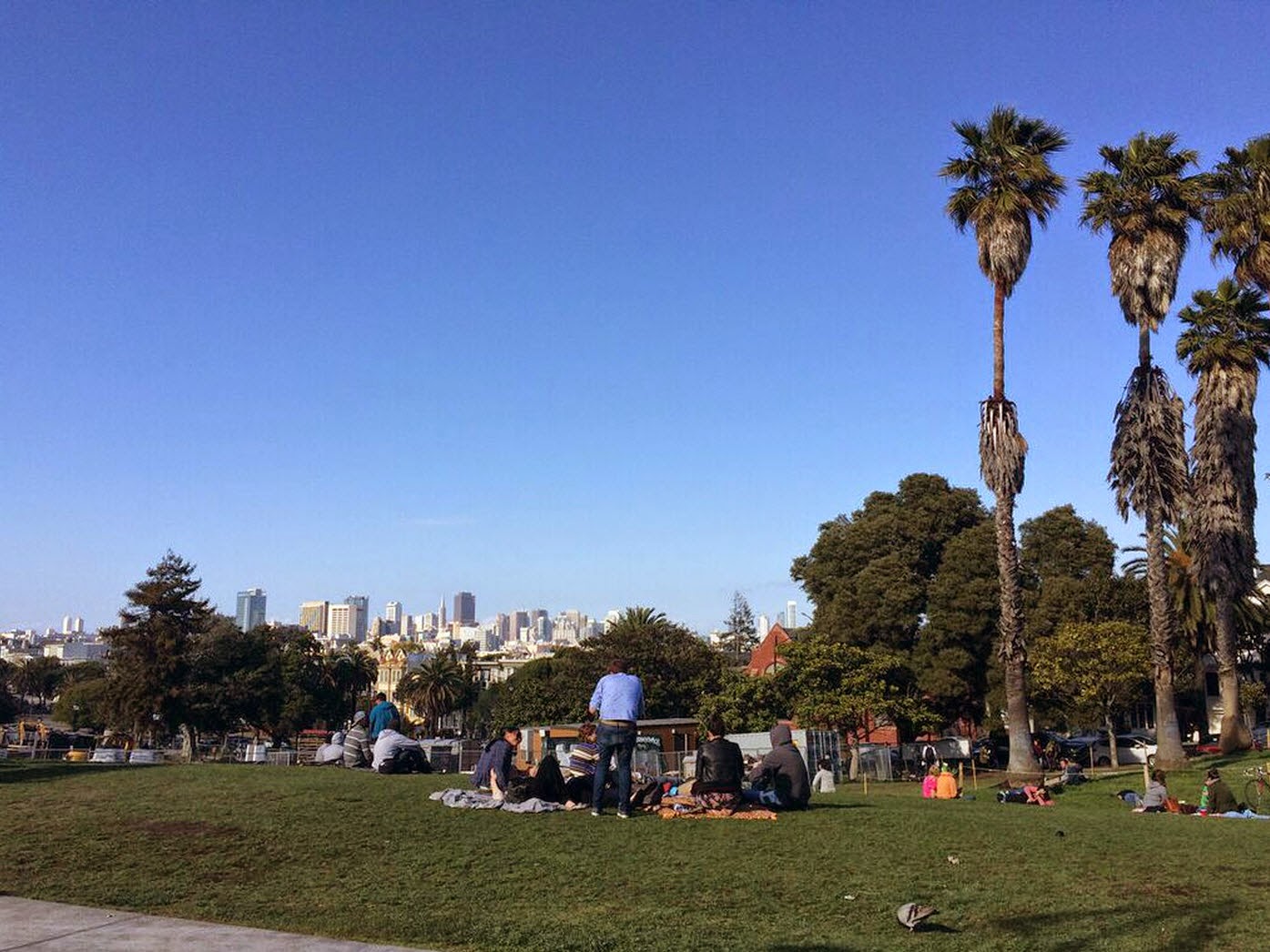 Then we climbed this really big hill. 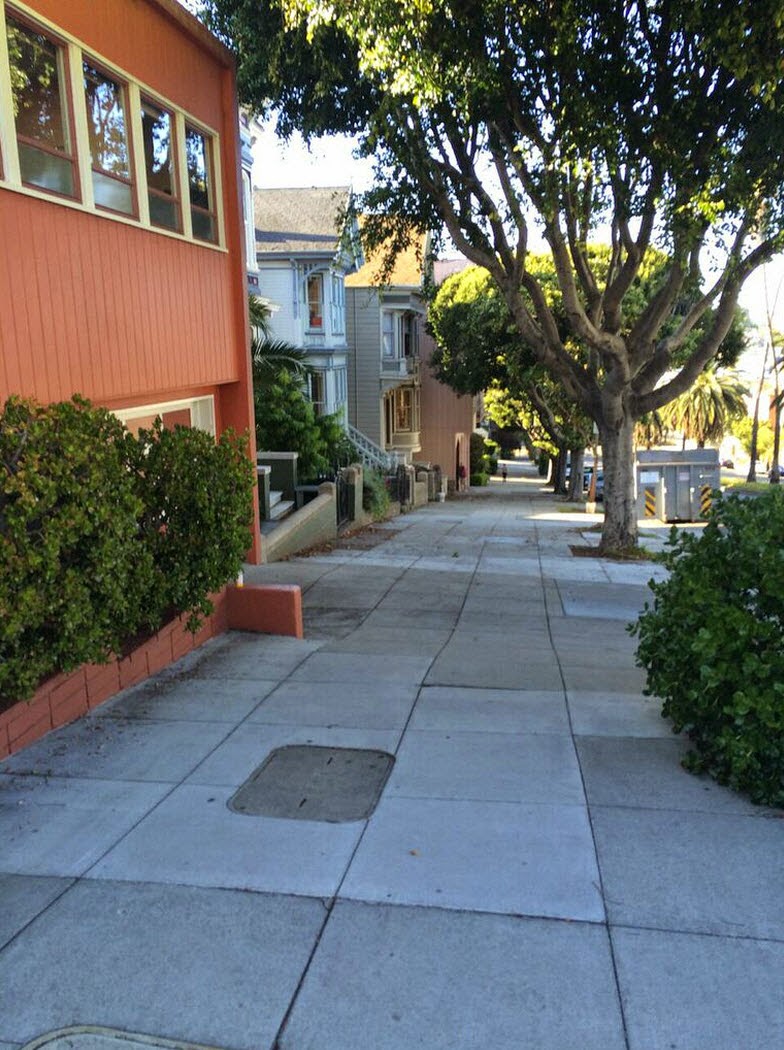 Me: Thanks for waiting for us [at the cross walk]. You could have made it.
Erika: Well, we would only have made it half way before it changed.
Me: That’s making it in my book.
Lucas: Hold on a second, let me check my book.  F, G, H… Half.  Yes, it’s right there.  Half is making it.

Lucky for us, Facebook told me that Janette was nearby so we went to go see Janette, Neville & 13 day old Azalea – with a bonus encounter of Janette’s parents!  We didn’t stay long, and I made sure they knew that Lucas and I were both vaccinated.  I also probably said and asked a bunch of non-parent things, but you know, with only sleeping 4 hours at a clip, maybe they won’t remember how dumb I sounded. J 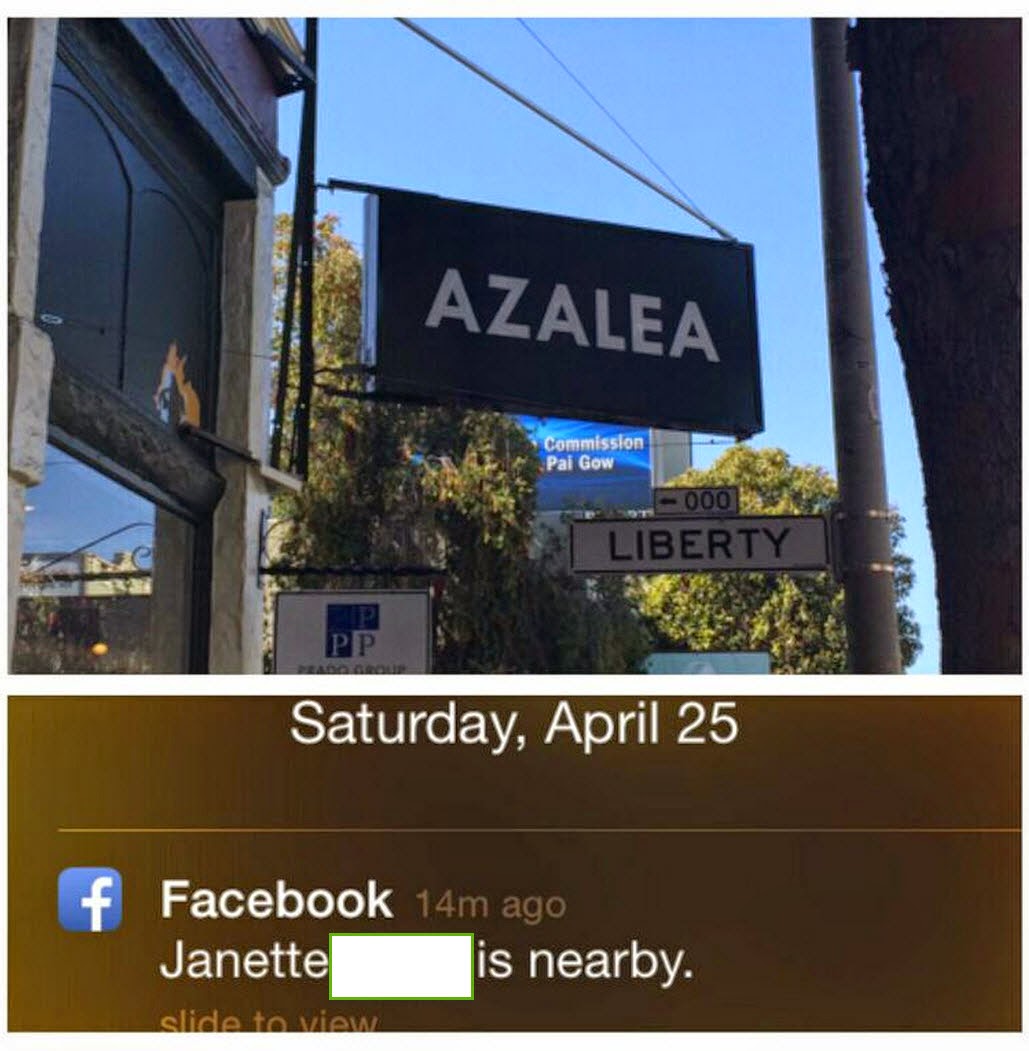 On our way back, we stopped to get some tea for Erika and the store clerk was drinking some beverage with 3x as much caffeine (natural tea caffeine) that Lucas got really excited about so we walked to Whole Foods to pick a bunch of it up for the road.  On our way we saw this “Nomad Rugs” that at first glance looked a little more like a drug store. 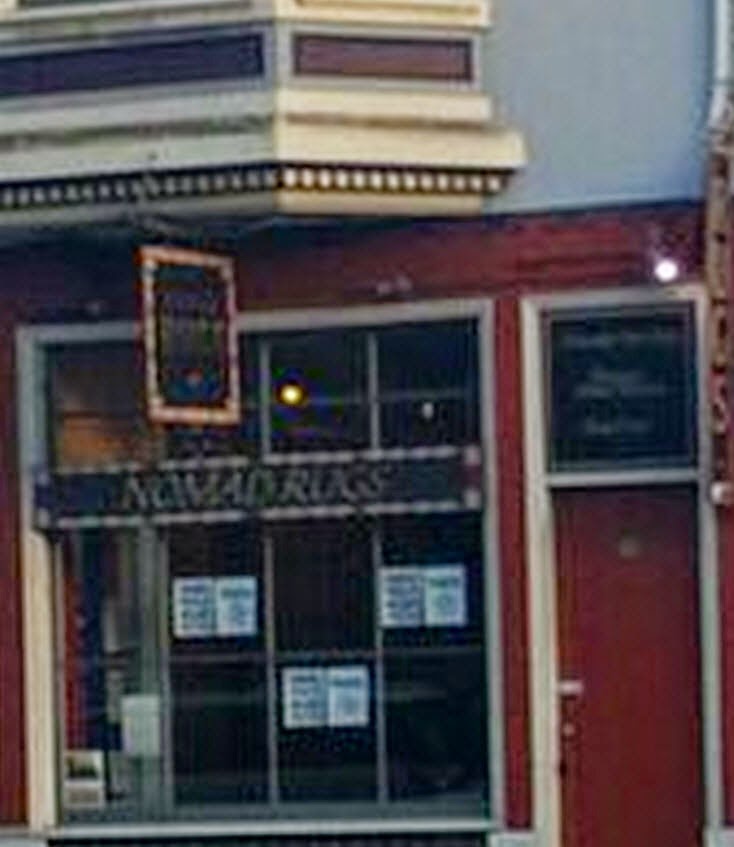 We also saw a very sad and desperate message graffiti’d on the sidewalk over and over.   Lucas asked me what I would write everywhere.

We took the Bart home, well to a certain extent.  Then we had to get out and take a bus, and I didn’t want to, so we took Uber back.  The guy who picked us up said that when he saw all the people he thought it was another riot (because apparently some bad stuff had gone down in that area before.)  Proud of our decision to get a car, we then proceeded to chat with this guy about prisons and listened to him call his sister and mother about where his nieces wedding was in Seattle, all while holding an iPhone for directions.  At least we got there safe, right?  That evening, after being cooped up in a car or a bag for most of the day, Percy was wild and crazy and I seriously didn’t know how to make him behave.  Kenny thought he was cute and told Erika they should get a dog, to which she said emphatically, No.  Erika also made me some delicious popcorn that totally tasted like stove top popcorn even though she had used her own paper bag in the microwave.

The next morning, every time Percy barked, Daphne sweetly said, “ruff.”   Erika got up early to get coffee and donuts.

Erika: What kind of donuts do you like?
Lucas: Jelly.
Erika: Jelly? Really? I didn’t know people like those.

Meanwhile, the place she got them from? Called “Jelly Donuts.”   There were delicious, so was the coffee, and before I wanted to, we were on the road listening to “Closing Time” Pandora radio station.  And little bit of Frankie Valli, Queen, and Waylon Jennings and really everything in between.  Of the 18 + hour road trip, Lucas only drove for 2.5 hours.  After the first hour, he said, “High five! I drove an hour.”  Then, “High Five! I drove two hours!” and then, “Um, can we switch now?”  I managed to take a couple of pictures of Percy road tripping during this time. 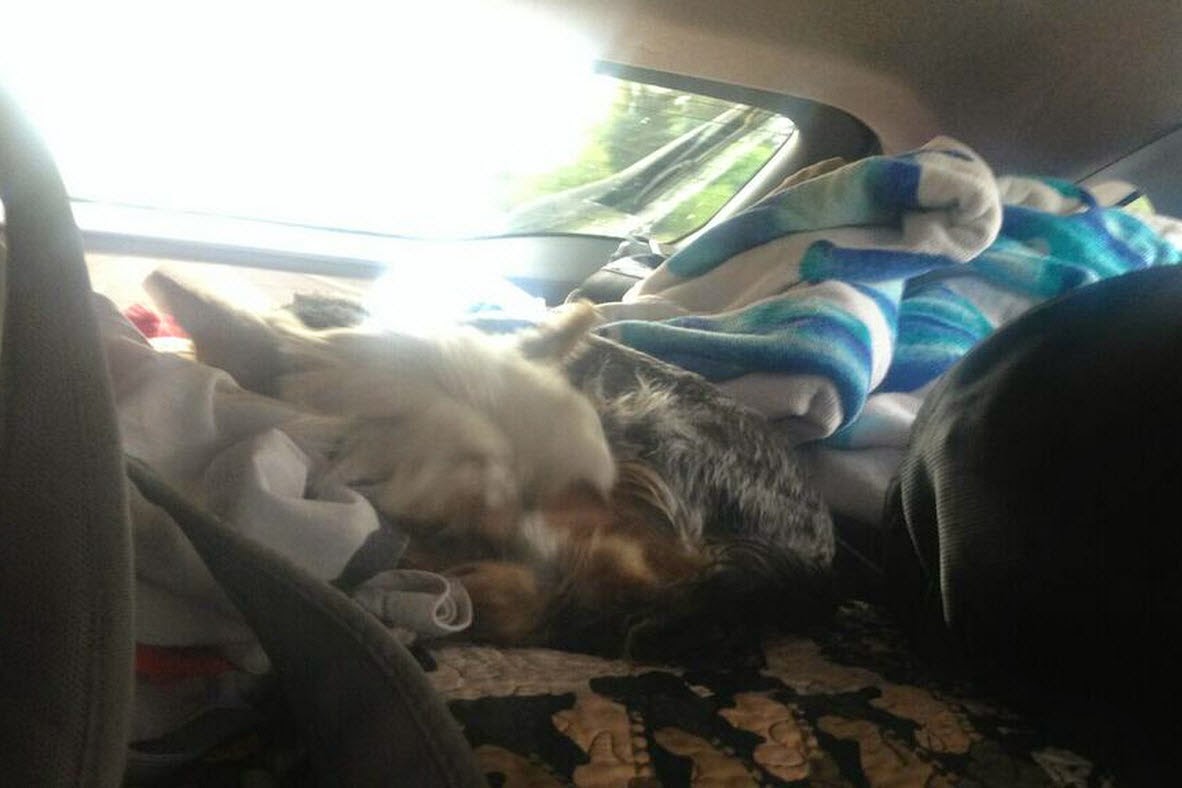 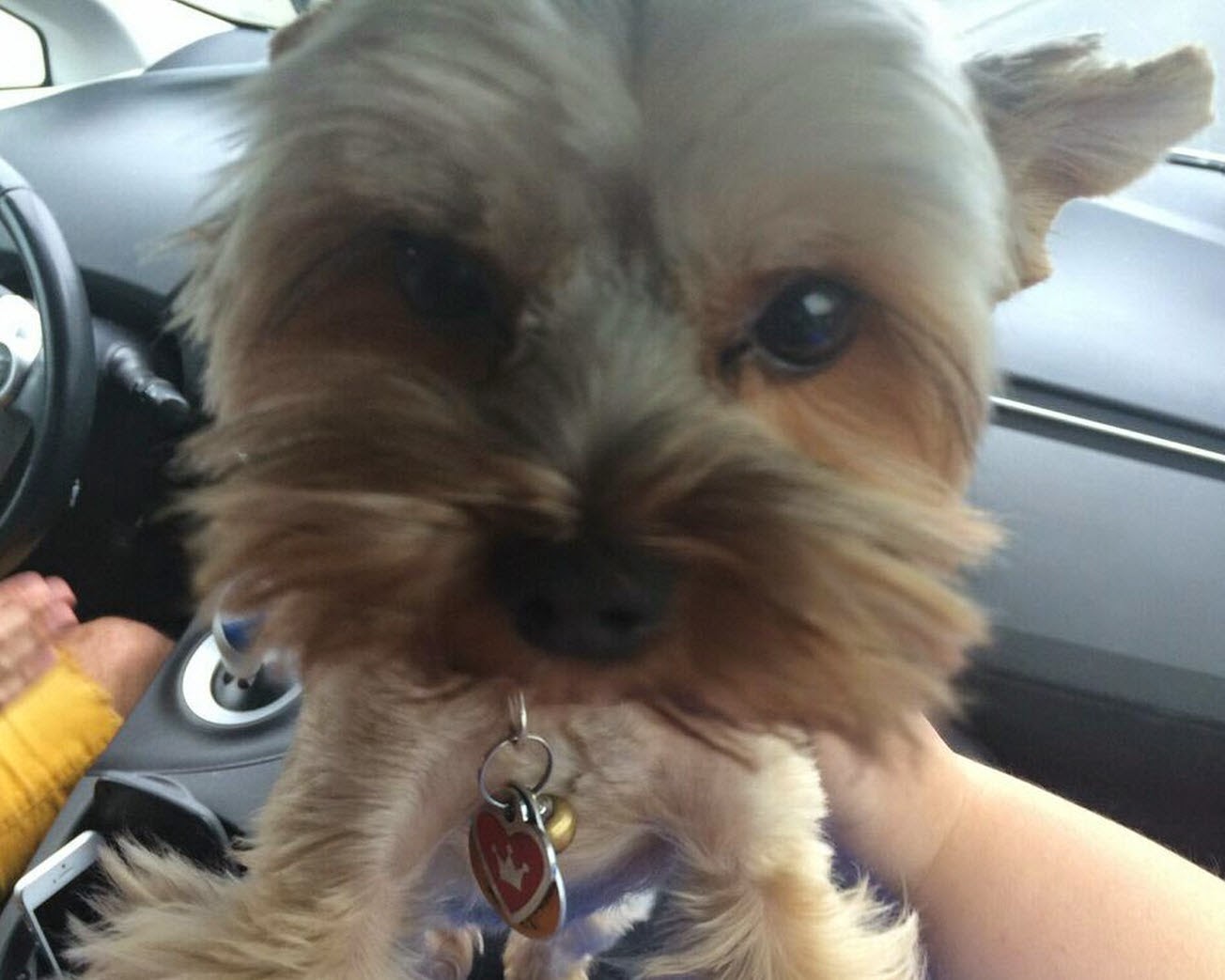 We planned it so that we hit up the last In and Out, in Redding, before leaving the state.  I ordered differently this time, and it was way better than the first time. 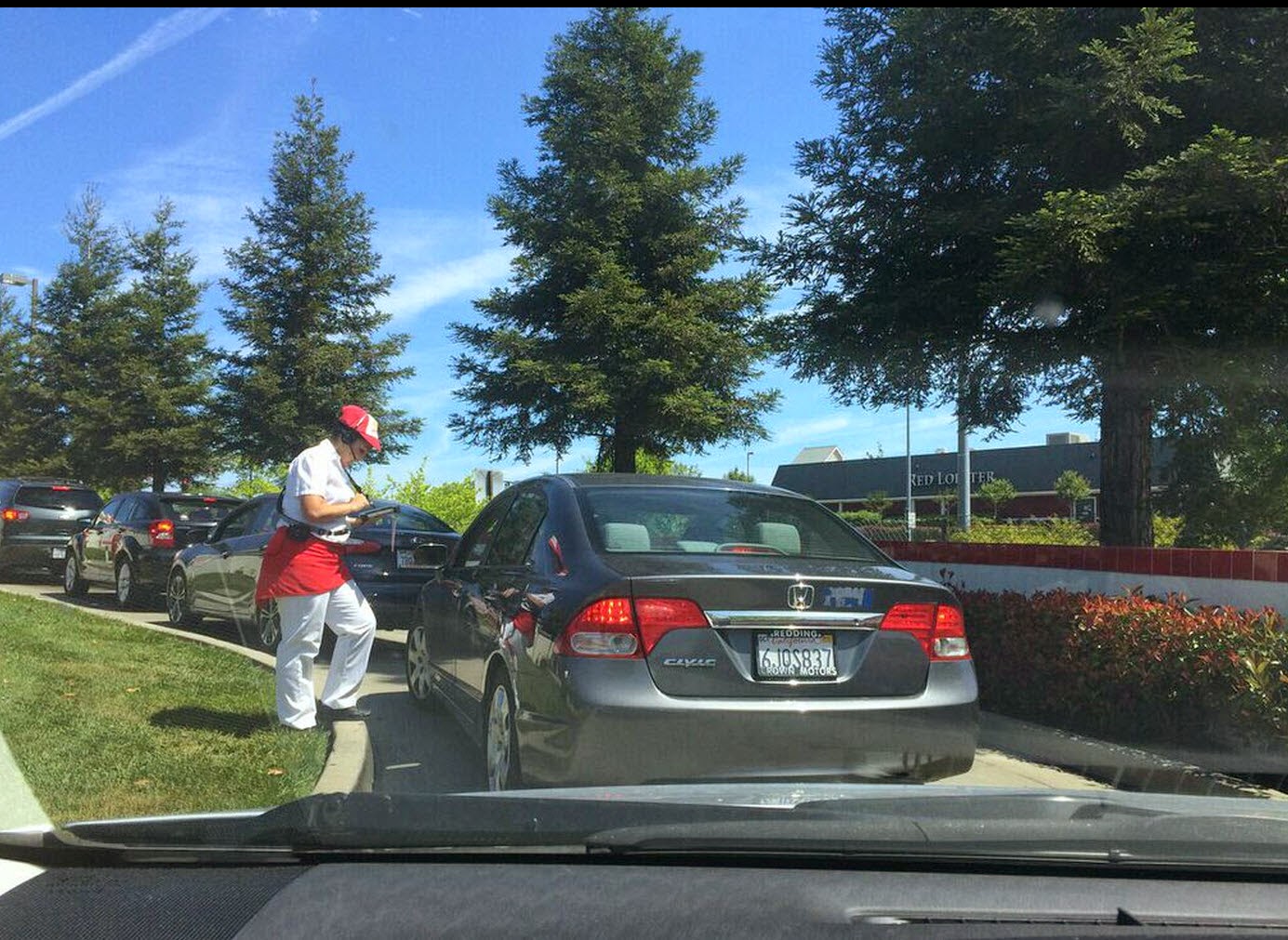 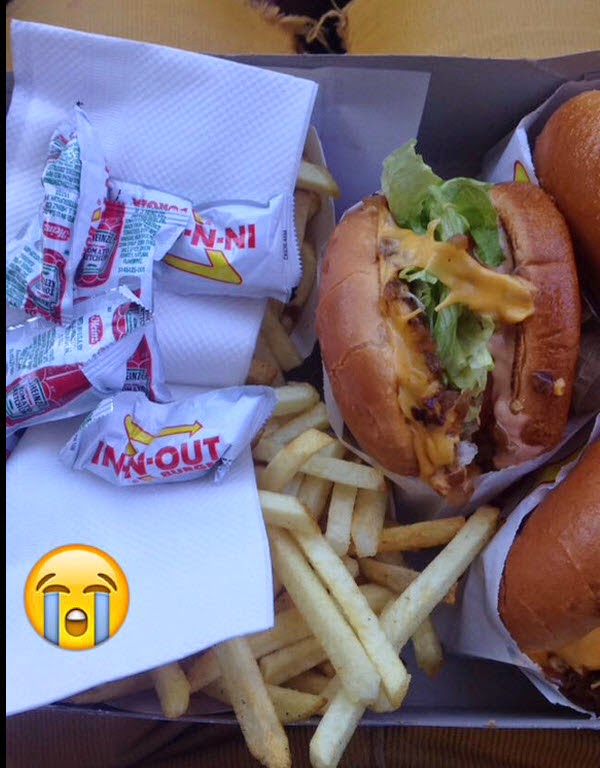 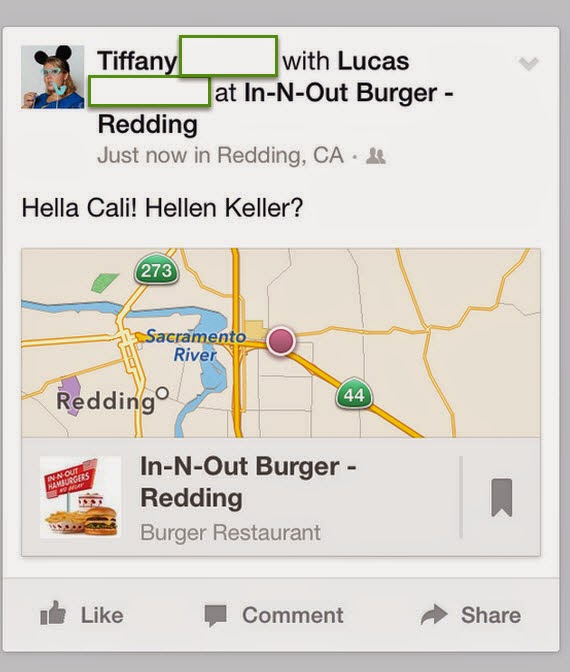 Then, we saw the “Welcome to Oregon” sign which was missing, “Take Off Your Sunglasses.” 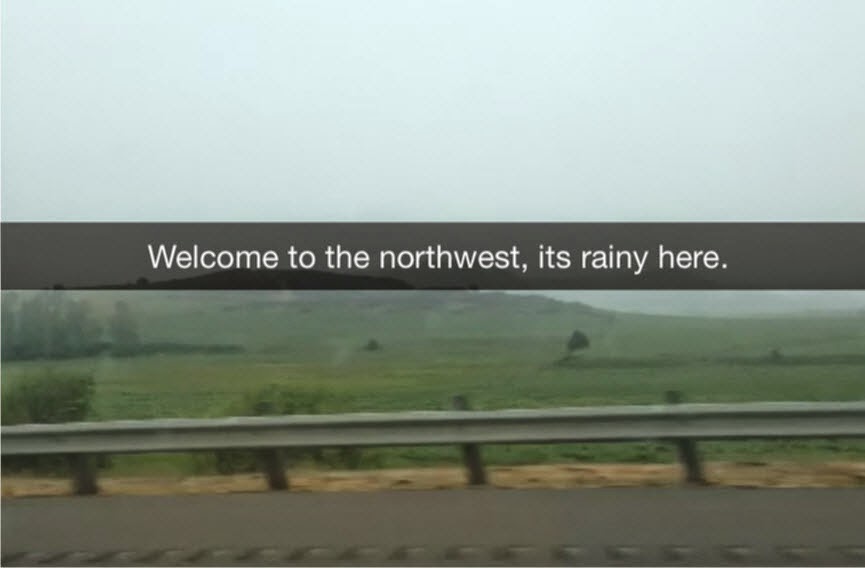 At one point, “Hallelujah” came on with, “The Fourth the Fifth the Major Lift.” Lucas: Best lyrics ever.  Just write the chords.  You gone have to write the words!

Lucas: Asia is 24 hours ahead, no wonder they are so advanced!
Always doing things before us.  I mean they have always been a day ahead; that has to add up.

I also started snap chatting this weekend, of course Lucas needed to teach me the ropes, and I still don’t understand why it’s fun, but I’ll get it I’m sure. 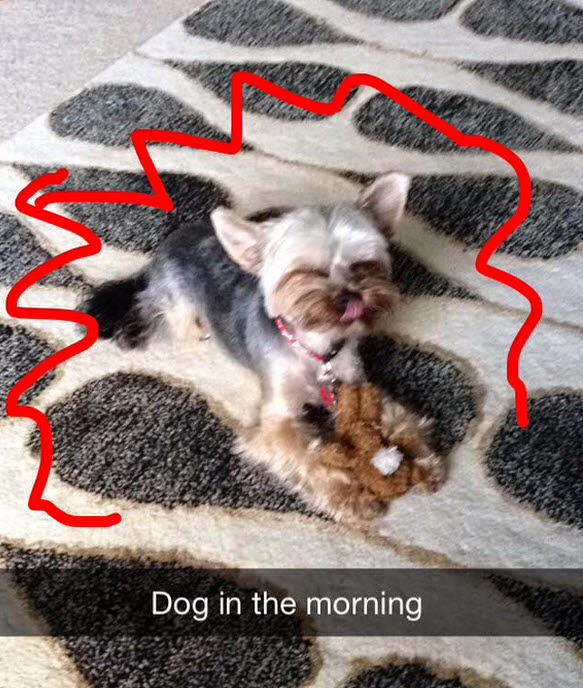 While we were road tripping, Patrick received his Ad Altare Dei from Cardinal Dolan at St. Patrick’s Cathedral – so proud! 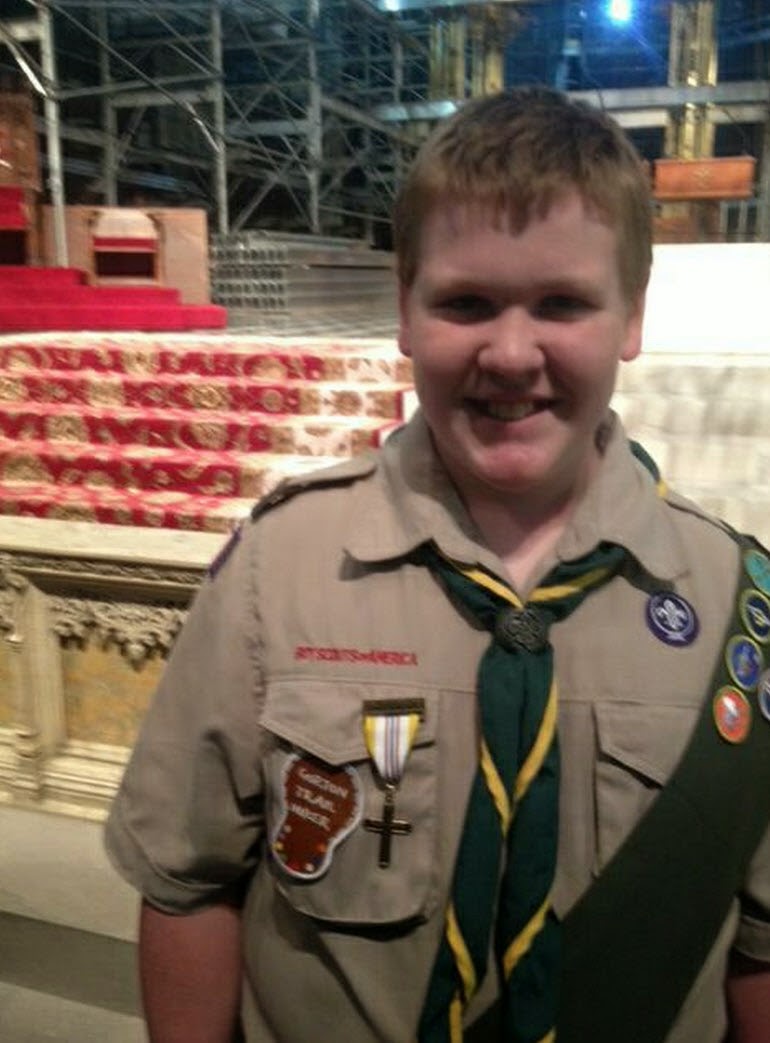 Posted by skcorynaffit at 10:43 PM