I am clearly wicked behind, and that means the accuracy of these emails might decrease significantly - as will the coherence.  You love me anyway right? The beginning of my week was pretty typical and boring, but I did laugh at least 4 times.

I was watching 8 Second Ride with Dawne.  Before the movie began we had been talking about the importance of supporting your partners dreams.
Dawne: If Jordan wanted to ride a bull, I would totally support him.
Me: Oh really? You'd just let him get up on that bull, when you won't even let any of us participate in paint ball?
Dawne: If he could I would.

My co-worker Ryan at lunch: I just feel like taking a nap and doing a jig-saw puzzle. I can't wait to retire because that's all I'll do.

Me: My kids are going to be so undisciplined.
Kelly: They'll be funny though.

I had lunch with Christy and her baby Amelia.  She was telling me that when she had her first child 8 years ago, he was absolutely perfect and easy that she thought, "Man, I am a really great mom!" And now that she has Amelia who apparently cries often, hates being in the car, and is well, over all, more vocal, she was questioning her original thought.  Then, we spent a whole hour at Starbuck in which I held Amelia and she didn't cry so I helpfully called her a liar. 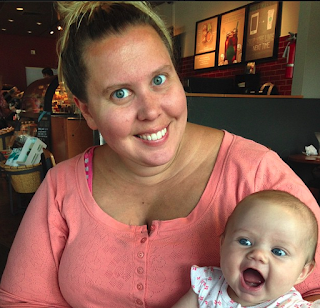 On Thursday, I flew to NY.  My flight was delayed 4 hours, so that's not awesome, but at least I arrived!  I mostly took a nap and then headed down to Stacey's to begin a night of T-Swift amazing with my nieces.   They had just gotten back from Ocean City, so they had a bunch of fun stories to entertain me as we drove down to the stadium.   Apparently, Morgan and Jackie almost died twice.  First they saw a shark while they were jet-skiing.  And then they took the paddle boards out and because of the current, it took 40 minutes to get back.  When they got unto the sand bar, they were forced to step on all of these crabs.  As they were just about to get off the sand bar, Morgan "decided to be a hero" and in her attempt to help Jackie, she lost her paddle and had to go back for it.  Jackie ignored the motto, "No man left behind" and took up the less popular, "Every man for himself" and didn't look back.

Me: Where were you during all of this?
Stacey: At the house taking pictures - I have a really good lens.

Jackie: I can't WAIT to tailgate, I love a good tailgate!
Morgan: When have you ever tailgated?
Jackie: Penn State game, and it was awesome.

We arrived at the stadium for our tailgate, and also for a lot of people watching.  There were so many costumes, including someone wearing an Ostrich costume?  The girls, who would never have worn a costume, told Stacey that they had to make it up to them for not getting them concert worthy costumes.  The penalty? Ice cream. 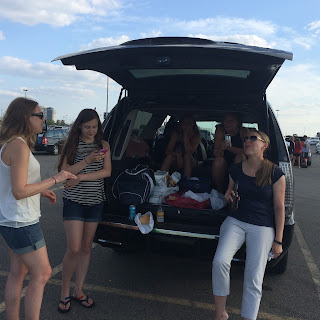 When we got into the stadium all of the men’s rooms had been converted into women’s rooms.  While we were in line for the bathroom:
Jackie: I’m so excited!
Me: For the concert?
Bailey: Yeah, but also to see inside a men’s room!
Jackie: I’m going to use the urinal. 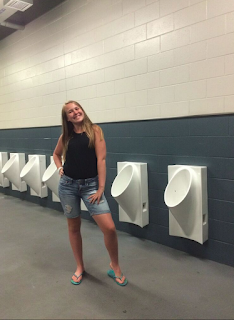 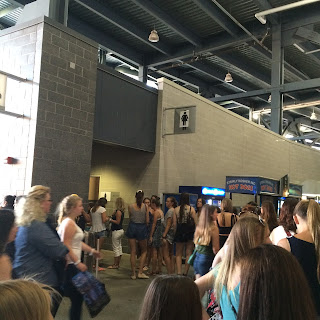 Taylor was telling us about how much easier it would be if life and emotions were less complicated.  To which I turned to Stacey and said, “Yeah but then there would be no Taylor.”

Carla: Taylor and I are Internet friends. We're friends on Instagram.
And then Taylor proceeded to tell us all about the many different types of friendship.  Like her internet friends. (Carla: I told you!)  She told us that her definition of friendship included someone who likes her and wants to spend time with her.  So, basically, she was hanging out with 60k of her friends.  She also talked about how everyone has bad days, and everyone gets sad.  And the next time she got sad, she was going to think about this night with her 60k friends and she hopes that when we get said we think of this same night.  I looked over at Morgan and she said, “That is so sweet! I think I’m going to cry!”

Now that Taylor lives in NY we had the pleasure of her inviting all of her NY friends.  At one point, Heidi Klum walked down the stage and Morgan and Jackie both looked over at me and said, who is Heidi Klum?  And then Taylor invited the US Soccer team on stage! 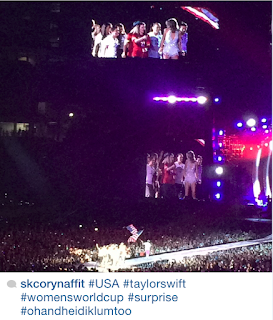 Me: I didn't know that song.
Morgan: I personally hate it.
Jackie: If it's personal keep it to yourself, Morgan.

Carla: Ugh that smell.
Me: It's Jersey. 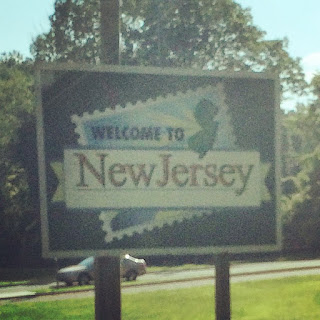 In reference to parking so you could beat the traffic.
Me: You did a great job!
Stacey: Well, in theory.
Me: No seriously.  Way better than those suckers.

Jackie: I'd be scared if I met the US soccer team in an ally except for Hope Solo. I'd just take a picture with her.  She's an Amazon.
This is when Bailey started reading her wiki:
Solo is married to former American football player Jerramy Stevens.[98] They have been together since mid-August 2012 when Solo returned from the Olympics. On November 12, 2012, Stevens was arrested on investigation of assault following an altercation that left Solo injured.[99] The following day, Stevens was released after a judge determined there was not enough evidence to hold him.[100] The pair were wed the next day, November 13, 2012.[101][102]

The next day, JULIE AND NICK CAME TO VISIT!!  They had just barely got out of the car when Jackie called to ask if we wanted to go on the boat.  I think Julie’s daughter, Lila would have rather have gone to the playground, but them’s the breaks. 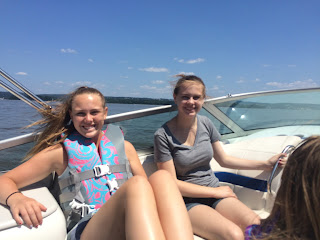 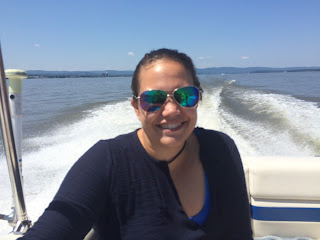 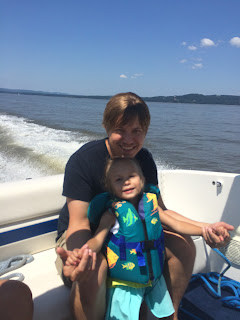 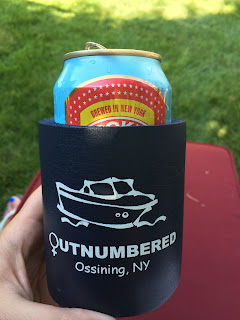 When we got on the boat, Jackie and Morgan were putting lemon juice in their hair.
Me: What did you learn from Taylor Swift last night?
Morgan: To define your own beauty.
Jackie: With Lemon juice.
Me: Fair enough.  Pass it over.

I told Nick and Julie that my mom had driven an hour to get my favorite Krakas ham.
Nick: I like that ham but not to drive an hour for it.
Julie: Yeah, you drove 3 hours.

When we got to Sean & Stacey’s for Morgan’s birthday, the song “Girl Crush” was playing.
Carla: This is our song!
Me: What?
Carla: It's been so long.
Me: Oh! Okay. I was gonna say - we need a new song.

Julie: Sometimes when Lila gets upset she starts sobbing and her whole face is covered in snot and saliva.  She's disgusting. And you wonder why I don't want a second one. 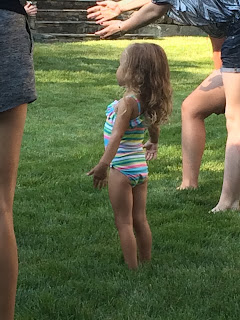 (She was totally kidding – Lila is all sorts of adorable and people can’t help but fall in love with her when they meet her.  Then again, I’ve never seen her covered in snot.)

Jackie and Bailey were playing soccer when suddenly, and without warning, Bails walked away.
Jackie: I think we're done playing? 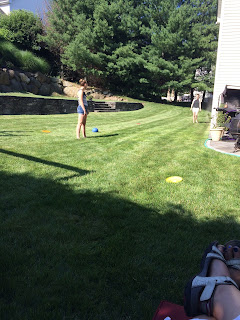 Nick: I went to doctor after I graduated collage and the doctor asked me about my family history.  I told him how my family has a history of heart disease so the doctor told me I was going to have to get blood drawn.  That’s when I told him, “Oh, wait.  I’m adopted.”

Maureen and Kyle picked up Kevin from one camp and drove him down to DC for a leadership program.  It took less than ten minutes before he found a group of friends and said good-bye to Mo.  Given that she clearly wasn’t needed, she drove back to NY.  When they got to Sean’s, Kyle ran his fingers through his hair until it was literally sticking straight out from his head on all sides.
Maureen: Fix your hair.
Kyle: It is fixed. I'm Einstein.

Maureen was telling us a story about the boys that happened the week before.
Mo: Kyle is a lot like how Tiffany used to be, emotional and a crier.
Me: Used to be? Come on now.
Mo: Anyway, I could tell he really wanted some company when he said to his brothers, “Can you come in the pool and flip me? I won't cry I promise.”

Doreen was telling us about how hard it is to find private time as a mother.  Back when she was staying with her parents, she went to take a shower and three of her kids started pounding on the door.  She tried to tell them that there was 5 other adults in the house, but apparently none of them were, “Mom.” I feel bad about laughing as hard as I did at this story.  I hope it doesn’t haunt me later.

Morgan opened her presents, and here us some running commentary I found amusing.
Cracker Jacks! I only get to have these on Fourth of July!
A Bug Bracelet! This is awesome it lasts a whole week! I got bit five times in Maryland and she told me to spit on it. (It’s true, I did tell her to spit on it – it works!)
Jacks! I know this from full house! 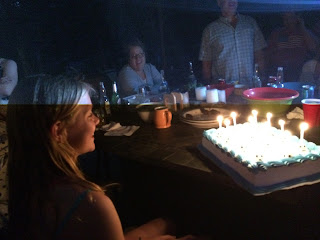 We went for a hike the following day.  Well, most of us went on a hike, Lila got sit on Nick’s shoulders.  He was telling us that Julie’s parents often bribe them to go to church by offering to buy them brunch afterwards and it works every time.  Also, Lila found out that there are quite a number of businesses in the Harrisburg area that offer dum dum lolli-pops, and for a while Nick was bringing her on unnecessary errands just so that she could get a dum dum.  One such time, Lila dropped her dum dum and started crying inconsolably.  Ever since, Nick carries a bag of dum dums at all time.

Nick: We will never again shed a tear over a pop again.

We finally did take Lila to the playground, which I think might have made her happy.  On our way there, I asked Kyle for something and he said he couldn’t because his “hands are slippery from the cheese its.”  Don’t you just hat when that happens?

Before I knew it, it was time for my flight back.  When I got to JFK, I discovered a super wonderful surprise.  Jet Blue opened an outdoor patio bar that is totally pet friendly.  And just like that, I forgave them for the 3 hour delay. 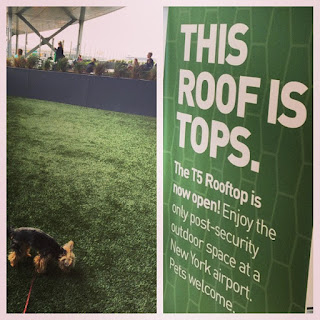 Finally, I noticed that there was a huge jump in readers from Israel from my last post - please please please if you're reading again this week, tell me what caught your eye.  I'm dying to know!

Posted by skcorynaffit at 2:08 PM