What does regulated mean?

I'm rewinding a bit to Thanksgiving week.  I flew out to New York on Wednesday night, so I had time on Wednesday to meet up with Lucas and Dawne for lunch.  Lucas filled me in on his car debacles.  Plural because, first he though when he bought the car right before we drove up to Seattle last spring, that they dealer had registered his car.  Only they hadn't, and he proceeded to get all sorts of tickets that they had to figure out.  And then, he locked his keys in the car.  I'm not going to tell the story correctly, but here's my understanding.  He was parked against a wall, and he drives a prius.  When AAA / locksmith came, they couldn't get the car started because kind of electrical connection to the car to start.  In the process of trying to figure that out, they left the car on and wore out the battery.  But they couldn't tow the car because it was up against a wall, and they couldn't jump start the car because they didn't have a key.  Several guys came out to try to fix the problem and all left Lucas without helping.  Finally the owner of the locksmith came and said that he wasn't leaving until Lucas had his car back.  They guy drove him to a dealer who made an extra key from the key that was sold to Lucas when he bought the car, then they drove back to find that it was the wrong type of key and then had to go back to the dealer to have a new one made before he could get back in, jump start the car and drive again.  So... that was my lunch with Luke.

Then I went back to the house with Dawne and Lucas to make cookies with Dawne, Zach, Diana & Harper only Zach and I didn't help bake at all and just watched Harper & Dawne do all the work.   But it was nice seeing everyone. :)  Dawne had rented a Yukon Denali so that they could all go to Leavenworth over the weekend.  Jumping on the opportunity, we filled it to the brim with the rest of my stuff and unloaded it into my spare bedroom where it has been ever since.

If I remember to add it, I saw this video of drunk girls and puppies that I think is super cute.

Percy and I headed to the airport, but before we did, I stopped at Chick-Fil-A for dinner.  I was very surprised to find myself in a pay-it-forward situation where someone ahead of me had paid for my dinner.  What an awesome way to put you in a grateful and giving mood for the holiday season.

Thursday was Thanksgiving which means I went to Sean & Stacey's and Stacey, once again rocked it in the kitchen.  Everything was absolutely perfect and I was overwhelmed with love, happiness and a feeling of gratitude for having such an awesome family.  In other news, Stacey has had this fish tank for 15+ years and recently one of her sharks died.  She threw her "beloved" pet in a ziplock and put it in the trash because it wasn't flushable (these sharks are like a foot long.)

Jackie: Did you hear about Dumpling?
Me: Morgan's guinea pig?
Morgan: Yeah, I came home and told mom that I wanted to bury him.
Stacey: I got rid of him. I took a spatula and threw him in the trash.

Jackie: I was in my Socratic discussion class and this girl was finished a 15 minute speech on Isis.  She paused to take a drink of water, when this other kid raised their hand and said, "So Isis isn't just one person?" and the girl ended up spitting her water all over the place.

Mo: Put some cherry pie on there, Kyle, I already threw out my plate.
Kyle was not happy about this, which is why I thought it was funny, but I also vaguely remember Sean considering taking something out of the trash to eat it, a la George Costanza, but I can't confirm the detail or if it was this weekend or Christmas weekend or if it happened on the Gilmore Girls, so maybe I'll skip that story. :)

The girls were discussing having a secret santa at Stacey's family Christmas.  The adults traditionally do a secret Santa, but Jackie thought it would be fun for there to be a 5 dollar Secret Santa.  As the Morgan & Jackie were discussing the details...
Morgan: How are we going to do this?
Jackie: Mom takes us to 5 below, gives us each 5 dollars and goes away.
Stacey: Excuse me?

Carla decided to so something a little different with the pie this year...

The day after Thanksgiving, Carla, the girls and I had our traditional brunch and baking morning.  I introduced them to "Spyfall" the day before, so we decided to play a little.  Basically, everyone gets a character, one of which is the spy.  Then the spy has to figure out where everyone is while the rest of the group has to figure out who the spy is, and the game is timed.

Morgan: What does regulated mean?
Jackie: Oh my god, we don't have time for that right now, Morgan.

Jackie: Bailey requested to be transferred out of my gym class.
Me: You didn't want to be in the same class as Jackie?
Bailey: I'd rather be with no one so my ego wouldn't be crushed.

Jackie has requested that everyone call her Princess.  The family has agreed, but it comes out more of a sarcastic, "Okay, Princess... "

We tried out three different recipes.  The first one you had to take pie crust and wrap it around Hershey Kisses.  Bailey and I wrapped them by rolling the dough into a perfect ball.  Carla & Jackie decided to make origami shapes out of the dough.  We're all puzzled as to why we continued to task them with the wrapping portion when there were many other jobs we could have moved them on to.  The last batch of cookies required some serious mixing.  Carla suggested we use the electric mixer, but Bailey insisted on doing it by hand saying, "Mixing my only exercise!"

Maureen: My kids think you have the most awesome job.  Meanwhile, they have a very low opinion of being a teacher because in the Game of Life, teachers are the worst thing you could get.

Eva & Briana came over with Austin & Freddy on Saturday morning.  My dad had surgery the week before and so he had a bandage from his ear to his neck.  Eva was telling Freddy that Percy bites, but you know, just a little bit, no big deal, while Freddy was giving her a look like, "What the hell, Mom? Why did you bring me here?"

Briana: I see you got bit by the dog, too.
Frita: He went for the jugular.

After everyone left:
Frita: You were interrogating Freddy like it was the inquisition.
Me: That's how you talk to kids.  I was taking an interest in his life!

I think the following conversation happened with Frita, although it kind of sounds more like Eva.
Frita: Father Rajan left the parish. We had a party.
Me: Did you go?
Frita: Yes. Not for him, for the treats.

Sean, Jackie & Morgan came over and we decorated the house with Christmas decorations.  It’s a major project, I'm not going to lie.  Sean also took down something from the attic (that my dad would later wrap up for him for Christmas) and I took down my Simpson Marionettes. Clearly, we couldn't remember where everything went, but I kept telling Sean not to stress about it because Mom would just move it all anyway after we left. Jackie sat on the arm of the Chippendale chair in the living room and there was this huge cracking noise.  I tried to cover it up but still tell my mom that the chair was broken, only to find out that Kevin broke it ages ago and Momela had glued it back together.  Phew.

On Saturday evening, Lisa came over.  She was telling us all about Buddy (the Elf on the Shelf) and his friend Sparkle.
Lisa: We told the kids she's from the South Pole.  She's darker because she was 20% off.
Luckily, Maureen's kids never did Elf on the Shelf because

Maureen: Sometimes in class, when the kids are acting up I say, "God is watching." And then, "It was okay in the catholic school - is it not okay here? Okay, but he is."

My sister always says, "Pool pond" instead of saying, "whatever."  It's a phrase that has always been in my life, but like some many other things, I had no idea what it was from.  I found out it was from caddy shack this weekend, and now I kind of want to watch that movie again.

Bailey: I tried baking again..
Me: Oooh! It looks like Vermont! 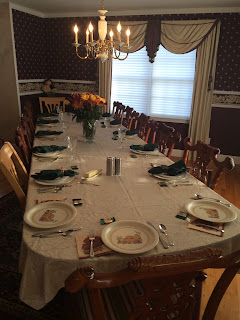 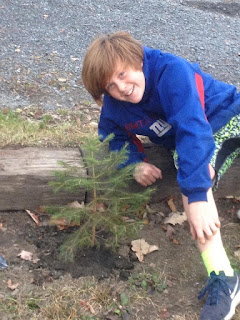 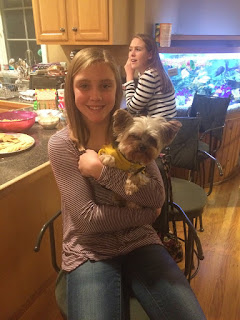 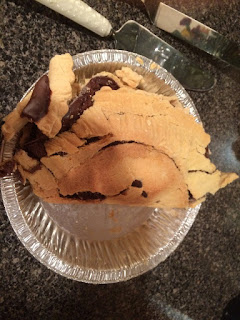 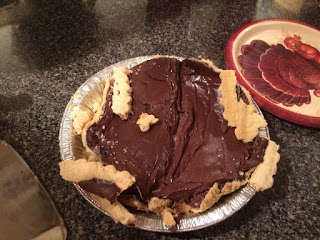 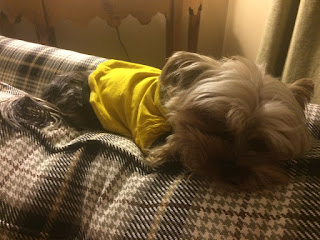 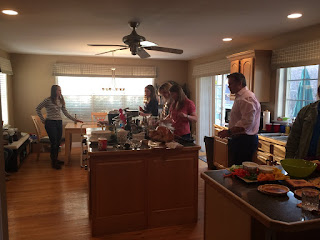 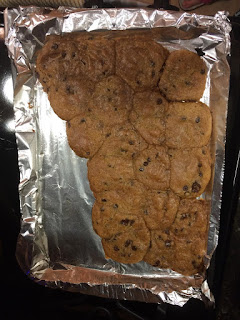 Posted by skcorynaffit at 10:18 PM